This has been turning out to be quite a busy week.  On Thursday evening I went to a craft meetup, one of the many things on my “when the thesis is finished” list.  It’s quite a cool group, pretty diverse in ages, if not genders, and a reasonable range of crafts, although of course heavily weighted towards the portable, like knitting and crochet.  They meet once a week, usually in a bar, and have a drink and a chat while working on their projects.  Last time I’d gone to the meetup had been in the middle of my thesis, when I wasn’t working on anything except the thesis, so I hadn’t taken a project, just sat and chatted and admired everyone else’s work.  But this time I was determined to take something I could work on.
As I couldn’t exactly lug my sewing machine and giant quilt along, I thought about taking a cross-stitch project, but it’s been so long since I worked on any of them it would have taken me all night just to figure out where I was up to, so I rummaged around in the study until I found a ball of wool (except it’s actually cotton) that Jenny had given me when she left, and found a crochet hook, and asked one of the crocheting women to refresh my memory on how to crochet (which I haven’t done since I was at high school, and wasn’t all that good at it then).
My aim is to make a dishcloth – I was given a crocheted dishcloth a couple of years ago (I think in a secret santa thing?), and after many washings it’s finally wearing out and developing big holes.  So I thought I’d have a go at making myself a new one, and with a bit of help (and a lot of “what on earth have you managed to do here?”, and “are you sure you’re right handed?”) from my instructor, I made what I think is good progress: 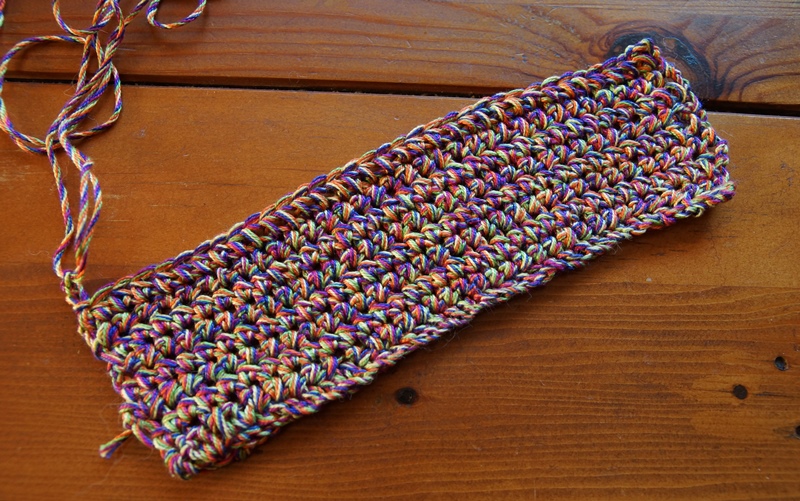 My technique is a long way from ideal (I’m sure I need at least two more hands!), and my tension is all over the place, but who cares – it’s going in the sink, it doesn’t have to be perfect 🙂  And at least it’ll be the most colourful dishcloth ever, even if it isn’t the prettiest (actually, that multi-coloured wool is horrible to use – it’s so hard to see what you’re doing!  I just picked it out of the stash because I knew it was cotton, so would work for a dishcloth, and I thought the colours would be nice and bright – I didn’t think about the practicalities of being able to see where the stitches are…)
Then last night I met Lytteltonwitch after work and we went to the Noodle Markets in Hagley Park (after a very long walk around the park, because they had it in a different place to last year, and neither of us had thought to look up where exactly it was (and Hagley Park is HUGE – it’s about a kilometre across North Hagley alone)).  The market was much better organised than last year, and only a couple of the stalls had the ridiculously long queues of last year.  Most of the stalls were concentrating on just a couple of dishes and were just churning them out rather than making to order, which really sped things up, and there were no signs of any of them running out of food like they did last year.
We shared dishes from a few different stalls at random, wanting to try as many different dishes as possible.  Then we saw people walking around with barbequed meat on skewers that looked particularly tasty, so we followed the trail of people back to the source, which turned out to be one of the stalls with the longest queues.  So I volunteered to stand in that queue and get us some skewers, while Lytteltonwitch went in search of the other thing we’d seen people walking around with – drinks served in pineapples (yes, actual pineapples, hollowed out and with a straw and an umbrella stuck in them – we decided that it didn’t matter what the drink contained in them was, we wanted one!).
Although my queue was long, it moved relatively quickly (they had an amazing production line going on with the skewers, with a huge line of barbeques grilling the meat), and we were entertained as we waited by passing dragon dancers (and by a sudden shower of rain – luckily, I happened to have a small fold-up umbrella in my bag, so I and my queue neighbours were able to shelter under it).  When I finally got to the front of the queue and got some skewers, there was still no sign of Lytteltonwitch.  So I headed in the direction of the pineapple drink stand, and found her still in the queue, which was almost as long as the skewers one, but much slower moving.  I was able to pass a skewer over to her to give her sustenance while she waited, at least.  The drinks, once she finally got them, were really good – a kind of mango smoothie, with a tonne of fruit in them, and garnished with slices of pineapple and orange.  Definitely worth the wait, and seriously filling – we didn’t bother going to any more stalls after that!  Using pineapples for cups worked really well with the eco emphasis of the festival (all the plates and cutlery were compostable, to minimise waste), and they were great marketing for the stall – as we wandered around we were asked by several people where we’d got our drinks, and even though we told them how long the queue was, they all raced immediately over there.
Walking back to the bus exchange, we passed a new addition Gapfiller has made to Re:Start – three table tennis tables, with bats and balls that you can borrow for a game.  Neither of us had played table tennis since high school PE classes, but we decided to have a go anyway, and spent a very giggly half an hour occasionally playing but mostly chasing down rogue balls – we decided we really should rename the game “off-table tennis”. There’s signs on the tables saying you must stop play when a tram passes, and I can see why, considering the number of times we had to retrieve the ball from the tram tracks!  We couldn’t quite remember the scoring rules, so no idea who won, but we had a lot of fun 🙂   A couple of young men stopped to watch (they were very polite and didn’t laugh too loudly), so after a while we surrendered the table to them so they could play a proper game.  Definitely a fun way to finish off the evening!
Then this morning I went to another meetup, this time with the Christchurch Bloggers group.  The group kind of fell apart a couple of years ago, when Miriam, one of the main organisers, moved to Australia.  But she’s back, and decided to reinstate the meetups, so we met for breakfast at C1 this morning.  It was great to catch up again with them, and the conversation ranged far and wide.  Hopefully this will be the start of more regular meetups again.
I’m turning into such a social butterfly lately!  (Though mostly just because I feel like I need to make up for lost time, after having pretty much ignored everyone for so long)

irst of December, so theoretically it’s the first day of summer today. So of course it’s cold and wet and miserable.  I don’t know why I’m surprised, really, because Christchurch does this every year – we have a hot November and we all think summer has come early, then it turns cold again in December…

I made a start on quilting the eye-spy quilt yesterday.  I didn’t get very far, unfortunately, because after about half an hour I suddenly seemed to have lost all my carefully practised skill at controlling the speed.  Now, no matter how gently I pressed on the foot pedal, I could only produce either dead stop…

was confused last night to hear a strange booming noise in the distance.  It sounded like fireworks, but Classical Sparks was last week, so I couldn’t figure out what it would be.  I looked out the kitchen window, because sometimes fireworks in town are just visible from there (Hagley Park is about 5 km away…

nother Christmas function today (almost the last one for the year) – this one for the College of Arts office staff, which they invited our office to, seeing as they share a corridor with us.  As well as a pot-luck lunch, the big event was the announcing of the winners of the Christmas door decorations…