I finished my crocheted dishcloth!  It actually went pretty quickly once I got the hang of it.  Now that I know what I’m doing, I might have to go and buy some more wool (or cotton, or cotton wool… you know what I mean) so I can make another one to have as a spare. But this time in a plain colour that’s a bit easier to see! 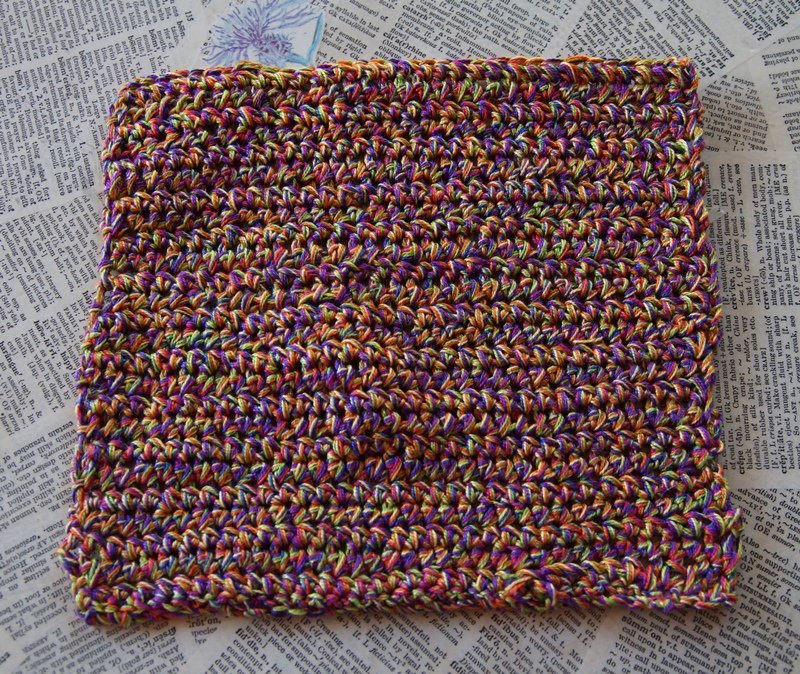 My super busy and social weekend continued yesterday with the Harvestbirds coming over for lunch.  I’d promised this to the mini-Harvestbirds a few weeks ago when Harvestbird dropped by to pick up the wee sewing machine (which she’s borrowing while deciding whether she wants to buy herself a machine), and they were most disappointed when they weren’t allowed to stay.  So I’d promised them that on my first free day they could come over.
It was a very nice lunch (with way too much food, as usual, but that’s what having friends over is all about!), followed by several complicated games involving various dolls that I kept getting the names wrong of, and which had particularly disturbing body types (especially the ones that were (apparently) human versions of My Little Ponies, and wore unfeasably large boots) – I never thought I’d look fondly on Barbie dolls as having presented a comparatively realistic body image!  Then the elder mini-HB declared it was time to play “that drawing game we played last time”, which I eventually worked out was the simplified version of Pictionary we’d came up with on a previous visit (probably about a year ago!).  So we arranged ourselves into teams (after much discussion of the fact that having kids vs adults probably wouldn’t work very well when one of the kids isn’t old enough to be able to read the cards yet…) and took turns drawing a word from the cards (generally selected by the adult on the teams to be the easiest for the children to ether draw or guess).
I love seeing how kids’ brains work as they play Pictionary or charades, or any of those games that rely so heavily on theory of mind.  It’s often not until the word is guessed before you can actually figure out what the picture was supposed to be, and how that relates in any way to the actual word – like when younger mini-HB was tasked with drawing a boat, so spent a very long time drawing water, but never actually got round to drawing the boat.  Or, best of all, when elder mini-HB had to draw a box, so drew a pokeball, and then something resembling a cat. We spent a long time guessing various pokemon creatures (assuming she’d got bored with the word on the card and decided to draw something else, because I knew my edition of the game long pre-dated pokemon!) before realising that the cat-thing was actually supposed to be a box with its top flaps open, and the pokeball wasn’t capturing it, but being put in the box.  The logic of the drawing was impeccable.  To a six-year-old. 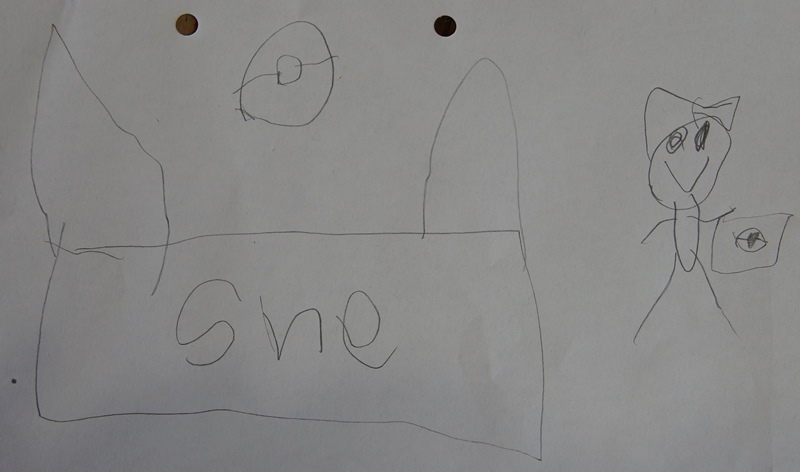 I spent Christmas in the best possible way – sitting in the shade of a tree reading, and eating raspberries (you Northern Hemisphere-types might get all the pretty of a white Christmas, but it’s tough to compete with fresh raspberries!). We decided as we’d both spent last Christmas away from home in different directions, with…

I’ve always suspected being social is a dangerous thing.  I proved it on Tuesday night, when, waving to my neighbour as we always do when I happen to arrive home while she’s in her front yard, I thought I’d actually stop and say hello for a change.  As I was talking to her, I leant…

Spring may not have sprung, but it’s definitely in the process of sproinging. Suddenly the days are getting longer (I’m actually getting home before dark in the evening!), daffodils are popping up everywhere, and blossom’s beginning to appear on the trees. Plus there’s just that indescribable smell in the air that tells you winter’s almost…

Yeah, I know, I said I never do these quiz things, but this one amused me, especially when I tried it out (just taking the first ten, rather than the applicable ones): FutureCat needs a cold shower.It *is* quite warm today, but I didn’t think it was that bad yet. FutureCat needs a smack daddy.Do…

Back working on my models again.  I thought I’d be almost finished by now, but last week I discovered I’d missed a couple of crucial steps from the process, so I pretty much had to start from scratch again (not quite, because a lot of the work I’d done before will be useful, but still…