I basted the flower garden quilt yesterday.  Which is just a fancy way of saying I pinned the top, batting and back together so that it’s ready for quilting.  Which means you’ve got to spread out the fabrics somewhere you can lay them completely flat before you pin, otherwise you get wrinkles in the backing.  Except I made the quilt just a little bit too big for the biggest bit of floor space I have: 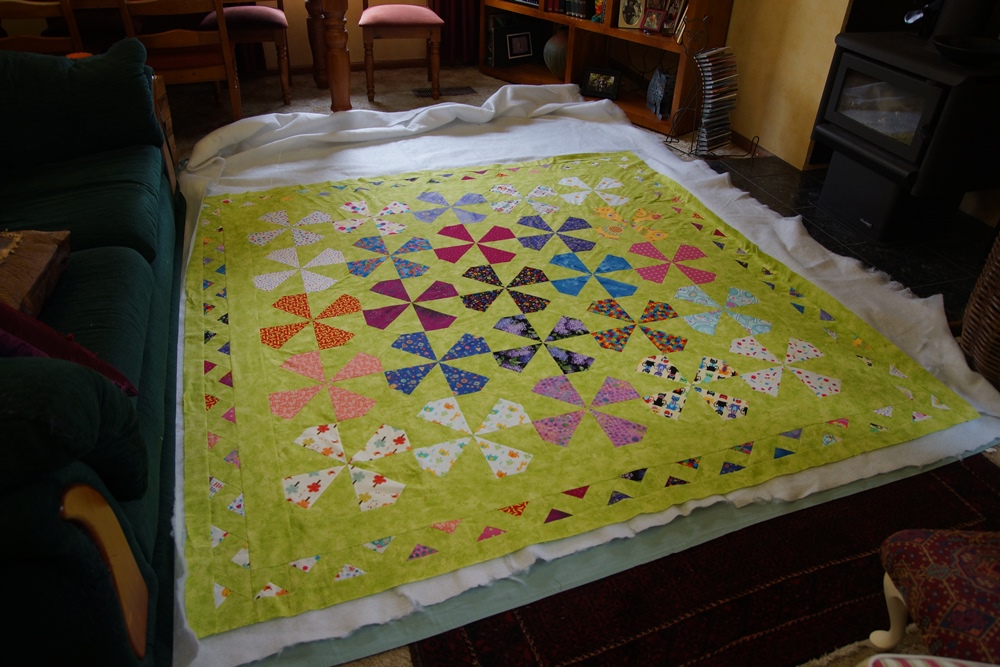 I think I need a bigger room. Or maybe I could just get rid of some furniture – I don’t really need a couch in my living room, do I?
I did manage to get it basted in the end, by leaving the edges until last and then moving it around a bit, but the thought of getting that massive quilt on my little sewing machine is a bit daunting!  (And as quilts go, it’s not actually that huge – it’s a bit less than queen size).
In the meantime, to get my FMQ muscles back in shape, I quilted the hedgehog.  I decided to try a spiky sort of quilting design, and I think it came out really well. 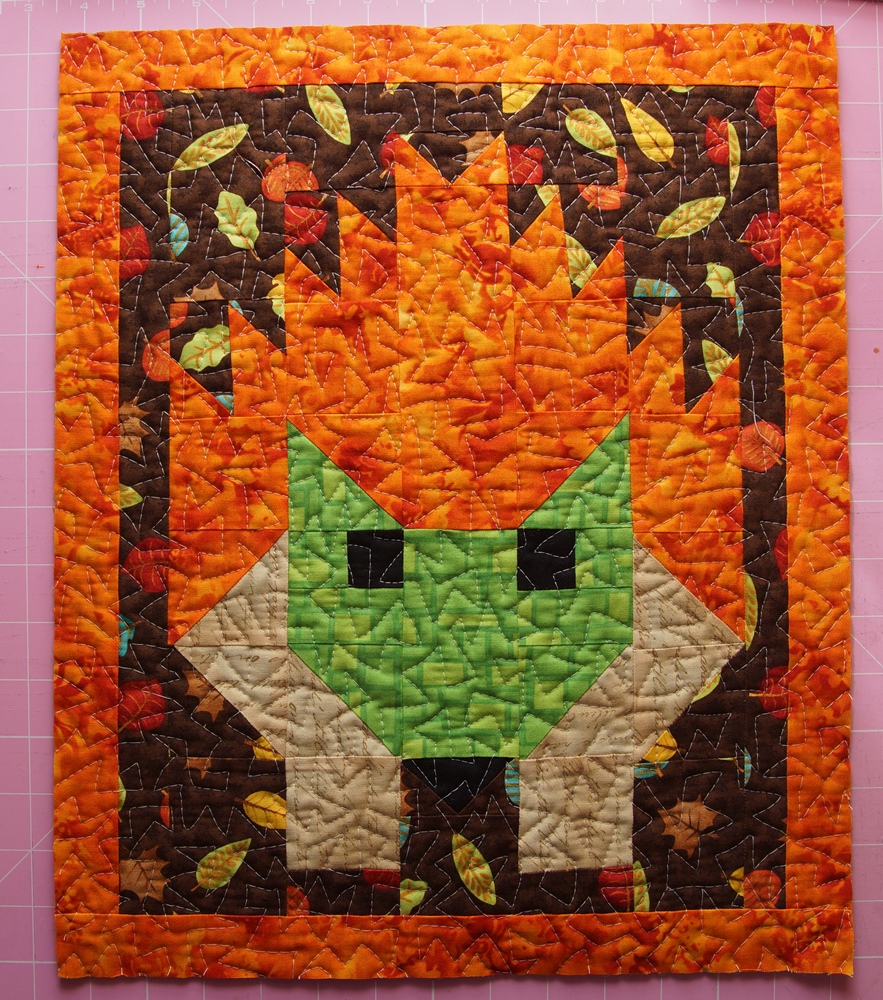 It even looks cool on the back. I used more of the orange fabric for the backing, and the spiky stitching on it came out looking like a cross between flames and an autumn leaf pile: 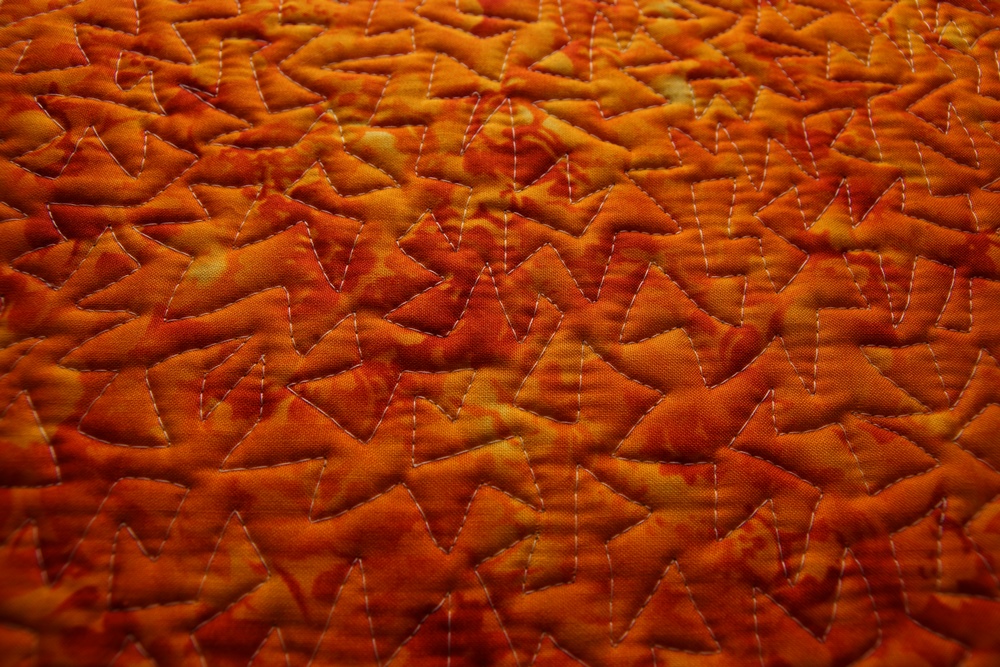 Just got to put the binding on, and it’ll be done (that’s the nice thing about mini quilts – they don’t take months (or years, in the case of the bird quilt!) to finish 🙂 )

I haven’t just been using my days off to sew (ok, mostly I’ve been using them to sew, but I have done some other stuff, honestly!).  Yesterday I met up with some old friends of Mum’s for afternoon tea.  They moved up to Christchurch a couple of years ago, and actually live in the next suburb over from me, but I hadn’t got round to getting in touch with them.  However, the other day I ran into them unexpectedly, so we made arrangements to meet up.  It was great catching up with them (I think I’ve seen them in person only a couple of times since I was at high school!), and they’re really lovely people – they kept insisting if I ever needed any help with anything to call on them, and they’ve promised to invite me to their next barbecue – you’d think it was me who’d newly moved into the area, not them! 🙂
And yes, Mum, I passed on your news, and they’re totally thrilled for you (though they’ve already probably rung you to tell you that – I think P. was going to ring you as soon as he got home!)

In other news, I think it’s time for a rebranding around here.  This blog stopped being primarily about bookcrossing a long time ago, so it seems silly that the name and theme is so bookcrossing-focussed. So I need a new name, and a new decorating scheme.
Except for I don’t know what to call it!  Any thoughts?  I’d like to get FutureCat in the title somewhere, but I can’t think of anything that doesn’t sound cheesy.  Maybe I should just follow Yetzirah’s lead and just make the title my name?  Any ideas greatly appreciated!

I spent a lovely day today with Pieta at a Christmas craft workshop run by Rekindle.  Rekindle were set up after the earthquakes to try and make use of some of the huge amount of waste from demolished buildings.  They’ve expanded now to find ways of making use of all sorts of what they call…

While I was working on my thesis last year, with no real free time to do anything properly crafty, I kept myself sane by channelling my creative urges into watching quilting tutorials on YouTube and keeping a notebook of all the ideas I wanted to try out one day.  And, when that wasn’t enough, by…

ade a small start on a biggish project. Mostly it involved just checking my stash and measuring and counting and calculating stuff and generally making plans, so no pretty pictures to show for it. But I made a start, at least. Actually, my biggest problem was deciding what to do – all semester I’ve been…

ne of my favourite parts of a Toastmasters meeting is the Table Topics section.  That’s when speakers are given a prompt (sometimes it’s a topic, sometimes a question, or sometimes something completely different) around which they have to create an impromptu 2-minute speech.  It’s incredibly challenging, but can be lots of fun, and definitely teaches…

Three more quilt squares done! Feathers. Apart from a wee bit of wobbliness in the corner (mainly caused by not having enough fabric to be able to get a decent grip to move it properly), this one went really well. It looks really cool on the back, too: Next is Ocean Current. This was definitely…