I finished binding the hedgehog quilt (which I think I should call Heidi Hedgehog, seeing as the original pattern I pinched the idea from was called Hazel Hedgehog) 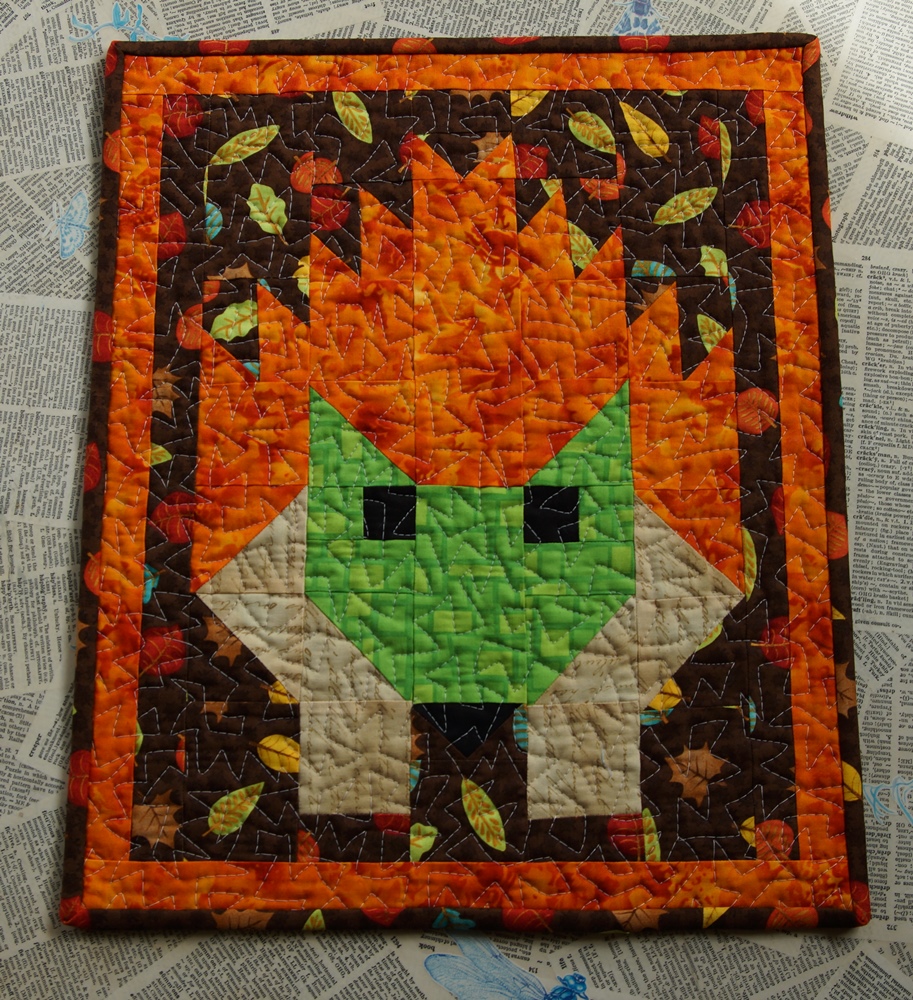 I’m really pleased with how it turned out – free-motion quilting is definitely a lot easier since I got the sewing machine repaired and can actually control the speed properly, and the gloves and slip mat really help a lot too. I feel like every quilt I do, I learn a little bit more – there’s still plenty of things I could improve on (like don’t look too closely at the stitch lengths, which are still all over the place!), but I’m getting there.
And talking of learning, I started to quilt the big flower garden quilt, and that is definitely a learning experience! Just figuring out how to arrange that much fabric in a way that the weight of it doesn’t drag on the bit you’re working on, but so you can still move it around, takes a lot of trial and error. I started off with the bits I wasn’t working on rolled up (and kind of pegged into place, because I don’t have any of the fancy clips the pros use), but I gave up on that after a while, because it made the quilt too stiff and hard to move. Having the bit under the machine loosely rolled, and the rest just sort of pushed up around me so I was working in a kind of nest seemed to work a bit better (no photos of that version, because I was too tangled up in the quilt to reach over for my camera 🙂 ) 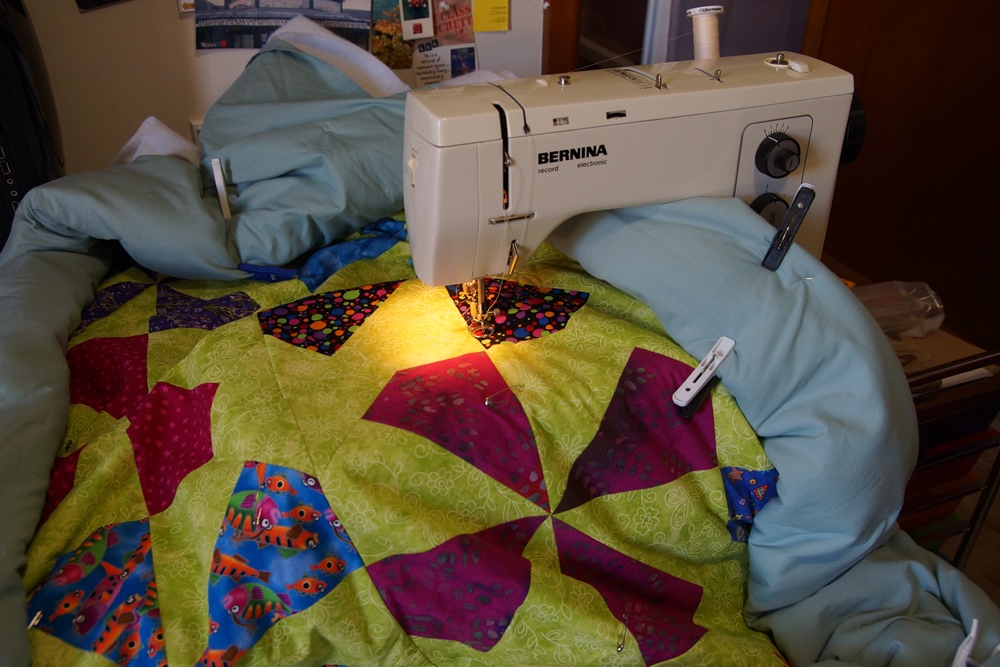 It’s physically a lot harder work quilting a big quilt, having to constantly move all that weight around, so I don’t think this will be a sit down and get it done in a day sort of project. It’s more one to do an hour or so’s work on, then have a rest and come back to it later. So yeah, don’t hold your breath for it to be done in a hurry, but at least I started it.

I had a nicely social (and foodie) day yesterday. First I got a message from Harvestbird to say she was taking a long lunch break, so did I want to join her. As we had a bit more time than our usual rushed workday lunches, we went into the botanic gardens, and had lunch in the cafe there, which was really nice (despite the sandwich I got not resembling in any way the one I ordered – it was nice anyway, so I wasn’t too worried). Then, in the evening, I met up with Lytteltonwitch to go to the food trucks in the Square. They rotate the trucks that are there, so there’s always something new to try. I wasn’t impressed by my first pick of fajitas (which turned out to be half cold, pretty tasteless, and more stewed than grilled), so threw out most of the dish, but made up for it with some barbecued satay beef skewers, which were really good. We shared some zalabia (a kind of Egyptian donut) for desert, which were covered in a honey syrup, so incredibly sweet – I gave up after just a couple of them.
Crafts, being social, having time for a leisurely lunch – I feel like I’m slowly turning back into a normal human being again after all those months of being a hermit!

r rather, it just saved my soul from being saved, which is even better in my book.  As is usual on a Saturday morning, I’ve got on some very loud music while I clean the house – this morning’s choice is Aerosmith.  And I just had a visit from some Jehovah’s Witnesses.  They were starting…

(I really did post this yesterday, it’s just DD was playing up again so wouldn’t let me post, so I had to put it on LiveJournal instead.) other, looks like DD is down again 🙁 So another daily post that I’ll have to post on LJ instead, and re-post to DD in the morning once…

s predicted, winter has returned with a vengance.  A freezing cold day, followed by icy rain and wind tonight (luckily I managed to make it home just before it started).  So Parsnips has got her wish – the fire is roaring, and she is comfortably ensconced in front of it (as I will be too…

decided to take a very long weekend this weekend, because (a) all the stress and uncertainty at work has been very tiring, so a break is definitely in order, (b) my leave is again accumulating to a point that HR will soon start sending me friendly reminders that I really do need to get my…

ack at work, and it was definitely a struggle to get up and organised this morning.  That’s the trouble with holidays, doing nothing becomes way too much of a routine.  But I managed to wake up sufficiently to clean the cat fur off my backpack (apparently Parsnips had been using it for a bed while…

It was the boys’ turn to claim their Christmas adventure today, so Dad offered to drive us up to Queenstown.  Queenstown is *the* place to be for New Year’s, so the town was totally packed (yeah, probably should have thought of that before we picked today to go up there…), and we had to queue…