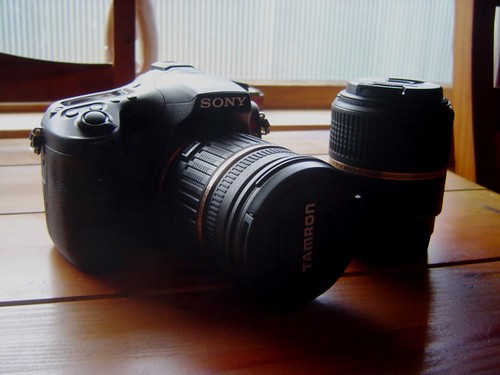 Those of you who know how much my little point & click camera has annoyed me over the years may be surprised to see the Sony label on the front of that beast, and indeed, that’s not the camera I went into the shop intending to buy.  But after talking to the very helpful and knowledgeable assistant for about an hour (!!!! on a busy shopping day a couple of days before Christmas – that’s what I call customer service! (it was in Paul’s Camera Shop, for Christchurch people – I’m happy to give them free advertising after today)) about different models and options, he sold me on the Sony.  Which I’m calling a Minolta, because Sony bought them out a few years back, so their DSLRs are basically just rebranded Minoltas, and to my old pre-digital photography geek brain Minolta is a proper camera brand 😉
For those who want to know such things, it’s a Minolta α77, and the lenses are both Tamrons, a 17-50 mm (having to get used to the much shorter lenses of digital – my go-to lens on my old pre-D SLR was 35-70) and a 60 mm macro.  I may get a longer lens at some point, but I don’t know how much I’d use it (the long lens on my old camera hardly ever left my camera bag, except in Africa for wildlife stuff), and I was already splurging by adding the macro lens.
I ended up going a bit over my intended budget – not on the camera body, which was actually a bit cheaper than the one I had in mind, but because I added the extra lens, plus a few other accessories.  But I’ve now got a camera that will actually do what I want it to, and hopefully, with a bit of practice (it’s been a few years!) I’ll be able to start taking the kind of photos I want to again.  I used to be a not bad photographer with my old SLR – nowhere near professional level, but good enough that I was pleased with my photographs.  So ever since my old SLR was rendered obsolete by the disappearance of film I’ve been dreaming of owning one again.  And now I finally do.
Merry Christmas me!
(PS. No photos from the new camera yet sorry – its battery is still charging.)

k, ignore everything you’ve ever read or seen about how spending Christmas alone is a terrible thing.  It’s not – in fact, it’s been a very pleasant experience.  Of course, it probably helps that I’ve never really thought of Christmas as that big a deal anyway.  Yes, I have a lot of fun decorating the…

From my travel journal: Saturday 17 November 2012, 7.30 am: In a cafe somewhere in Canberra (I don’t know, I went for a walk, so I could be anywhere…) I really should have started writing this up last night, but sleep was more urgent.  It was a very long day yesterday.  Started at 3.30 am…

A mysterious gift of marmite just appeared in our hallway (at least, I assume it just arrived – I’m pretty certain it wasn’t there last time I walked past).  Neither of us heard it arrive, but it’s a lovely day so the front door is wide open, so whoever it was obviously just popped it…

ompared to how much my throat was hurting on Tuesday, I feel almost back to normal – antibiotics are truly magical things. My throat’s still a wee bit scratchy, but at least it doesn’t feel swollen any more, and it isn’t agony to swallow.  I haven’t even felt the need for any medicinal icecream today,…

ell, I managed to get through yesterday and even made it to the party in the evening (which was a lot of fun – it featured giant jenga on the lawn, and a poetry recitation by the boss), but I’m paying for it today – I don’t feel all that unwell, but I’m exhausted, in…