A couple of days ago, two scrub fires broke out in the Port Hills.  Since then, despite the best efforts of fire fighters (and the death of a helicopter pilot who had been one of many dumping water from monsoon buckets) the fires have continued to spread, and the cloud of smoke over the hills has got bigger and bigger.  People are being evacuated from the area (it’s mostly rural in the areas where the fires are, but there’s a few pockets of houses), and at least one house has been destroyed.
Two days ago, Lucy-Jane took this photo from our office window of the plume of smoke. This is the photo I took just a few minutes ago: 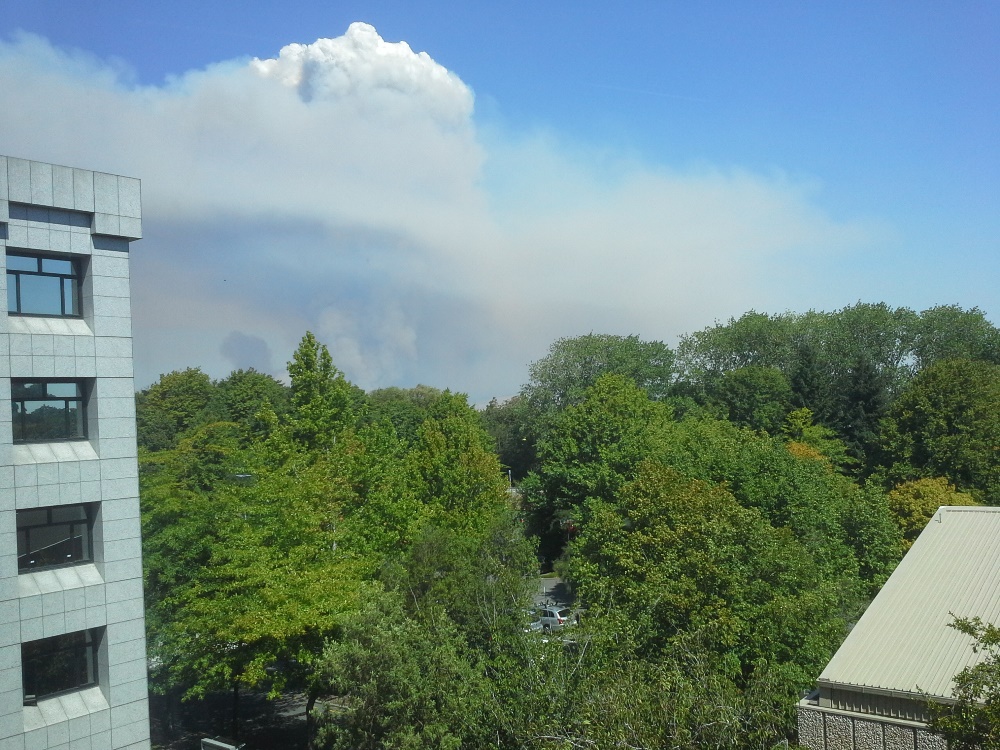 Some of that is because the winds have shifted and are blowing more of the smoke towards the city, but it’s still a huge increase in the amount of smoke!
We’re a long way from the hills on this side of town (probably 15 km or so from where the fires are), but last night I could faintly smell smoke in the air, and while I can’t really smell it today, I can feel it in my throat and eyes.  I’d hate to think how bad it is over in the suburbs closer to the hills.
There’s been a constant stream of helicopters and small planes going overhead today (we’re between the airport and the fires), and every so often we see the little specks of helicopters silhouetted against the cloud of smoke.  It must take a lot of bravery to continue flying into those conditions when you know one of your colleagues has already died doing the same thing.
Normally when our Australian friends comment about how they don’t know how we can cope with New Zealand’s earthquakes, our response is to say at least we don’t have big bushfires like they do.  Yeah, guess we can’t say that any more…

Christmas presents for my workmates. The theory was I’d make something quick and easy that I could produce multiple of in slightly different designs so I wouldn’t have to think about it too much.  Except that, as always, I forgot just how much time cross-stitch takes (about an hour per letter, in case you were…

ell, we survived. The kids went home on Tuesday, and after a day to recover, and a day to clean the house (you would not believe where it’s possible to get popcorn!) and then another day to recover, we’re almost feeling back to normal. The cats have even almost forgiven us. Actually, we had great…