ay for five-day weekends! (Tuesday is a university holiday, on top of the usual Easter public holidays).  I’ll admit my first instinct was to treat the long weekend as three extra days I could spend in my office coding my data (a long and laborious process – I’ve got tens of thousands of instances of “of” or “-‘s” in my data, and I’ve got to manually go through each of them and decide whether it represents a possessive or not (not as easy a decision as you might think: “the roof of the house” definitely is, but what about “the middle of eating lunch”, “that kind of thing” or “lots of rubble”? (spoiler: they’re all technically possessives.  But “all of a sudden”, “sort of screamed”, and “full of water” aren’t.)), and then I have to classify the ones that are possessive according to a long list of criteria that seemed sensible when I designed my methodology but now I’m faced with actual data seems overwhelmingly huge.  Plus, people don’t speak properly!  I wish I had nice data like “the roof of the house”.  What I actually get is something like “and then um the the the r~ the top ah you know the roof f~ the roof of of the um the h~ the house you know sort of fell”, and I’ve got to somehow figure out which bit of that is the possessive.  When you’re reading the nice examples in textbooks, they never mention that nobody actually talks like that! (sorry, my quick aside seems to have turned into a rant about data.  So, back to what I was trying to say…)).  However (as may be evidenced by the preceding brackets), I realised it’s probably about time I had something resembling a break, so I compromised on doing *some* study but not an excessive amount, and spread out over the whole long weekend (rather than my usual system of spending one whole day of my weekend studying).  Trying to find a balance between actually enjoying the weekend (not that I don’t enjoy studying, but it is tiring) and not feeling guilty about wasting this opportunity to get all this extra study done.
Anyway, it seems to be working ok so far.  On Friday I did the housework, then went into my office for a couple of hours, then met Lytteltonwitch in town so we could have dinner at the food trucks in the Square, because it was their last Friday night before shutting down for the winter.  We tried also to go and see Ornot’s new play, but the booking office was closed when we first tried, and then when we went back later they’d just sold out.  Oh well, should have been more organised and booked online…
On Saturday I walked over to a cafe for breakfast, did a couple more hours work, then came home and baked some biscuits.  Half the biscuits I took round to the Gwilks’ that night for the games evening they were hosting.  They wanted to introduce various parts of their friends groups who didn’t intersect to each other, so I didn’t know any of the other people there, but games are a good way to get to know new people without all the awkward “so… what do you do…” small talk, so it was a really fun evening.  Made even more fun by their cat deciding to bring a small rat inside in the middle of proceedings.  The rat of course managed to escape the cat’s clutches, run up the curtains and leap from curtain-rail to shelf around the room, causing much chaos as everyone tried to alternatively catch it or just get as far away from it as possible.
After the late night on Saturday, I decided to take yesterday off entirely.  So I spent the morning sewing.  I don’t think I’ve shown you pictures of my latest project (not that I really need a new project, because I’ve still got the Birds in Flight quilt to finish, but that’s at a stage that requires much thought and planning, and I wanted something that I could just work on a little bit at a time when I’ve got an hour or two spare).  I finished the last of the blocks for it yesterday, but I’ve still got to do all the sashing yet. 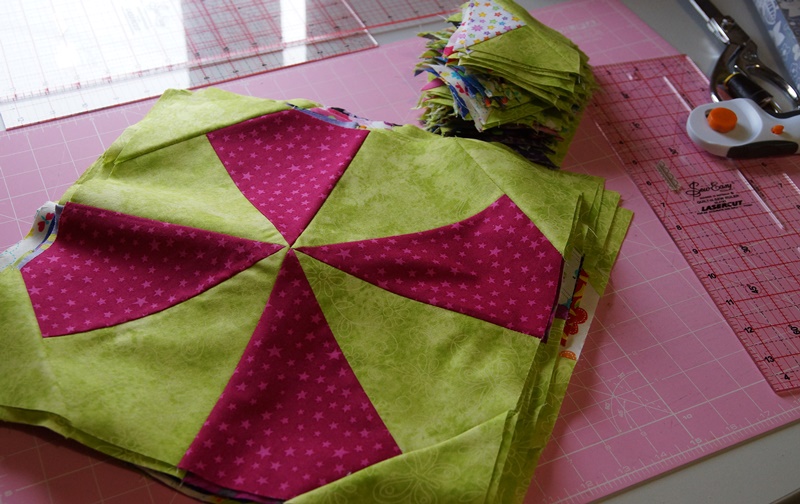 The background fabric is a much nicer shade of green than it seems in that photo, honestly, it’s just taken in bad light. It’s actually a really fresh spring green, that goes great (I think) with the bright colours I’m using.
Then in the afternoon I went over to Harvestbird’s with the other half of the biscuits, to eat cake, peaches, and easter eggs (the mini-Harvestbirds had had an easter egg hunt in the morning, resulting in a considerable haul, so adult Harvestbirds were working on the theory that it’s better to get as much of the chocolate consumption over with as quickly as possible, and suffer one day of hyperactive children rather than drag it out for weeks), and sit in the sun (well, in theory, anyway. The mini-Harvestbirds were very excited to have me visit, so I spent a lot of my visit playing with them (hmm, maybe that’s why they’re always so excited to have me visit…) – so I had to push them (and their imaginary friends!) on the swing, take part in ballet practice, say hello to a pink diamond with a face (called “Diamondy”, of course), and help build an elaborate lego ice palace for the diamond, to protect her from attacks by Ralph Wiggum from the Simpsons (it all made sense at the time, possibly?). Harvestbird took a photo of the ice palace (Flickr won’t let me embed it for some reason – possibly because you’ve licenced it copyright, Harvestbird?).
The plan for today and tomorrow is similar.  Once I’ve finished writing this I’ll head into my office for a few hours again, then maybe have a late lunch somewhere nice, and tomorrow I might take advantage of having a day off when everyone else is back at work to go into Riccarton.  Maybe I’ll even do something drastic like see a movie!
While I’m posting photos, here’s my shiny new suitcase.  For most trips to conventions when I’m just going for a few days and am carrying more books than clothes, I normally take my yellow bookcrossing bag, but it’s not really big enough for longer trips. And my battered old suitcase that I’ve had since I was 19 is really on its last legs – the wheels fell off years ago, and I don’t think it can survive another long-haul.  So I bought myself a new suitcase the other day.  But it was a bit boring, and looked like every other suitcase in the world.  And the advantage of my yellow bookcrossing bag, and even more so of my old suitcase (which I’d extensively decorated with that puffy foam paint that everyone decorated their clothes with back in the 80s), was that they stand out really well on baggage carousels.  Who needs to tie an identifying piece of ribbon to your bag when your entire bag is decorated? 🙂
So the solution was obvious.  Buy a packet of sticky foam shapes, and make my new suitcase a bit more interesting: 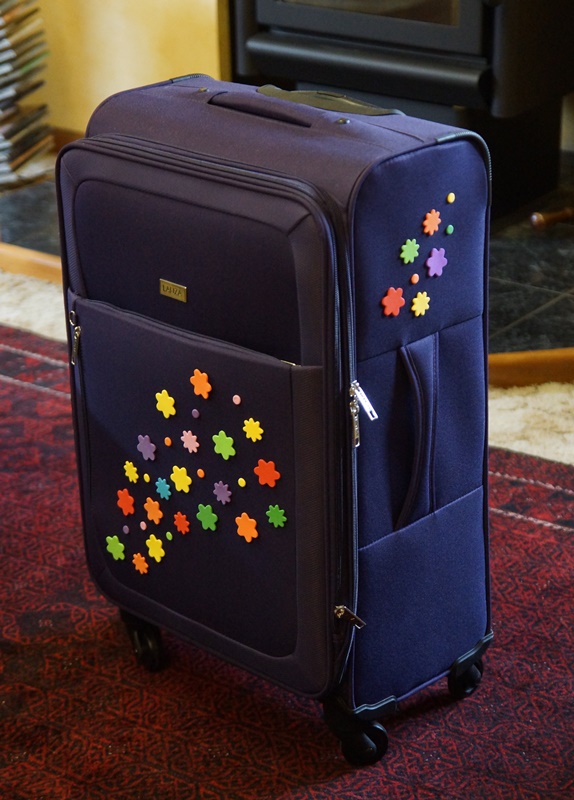 Ok, so half of them will probably fall off before I get home, but in the meantime it’ll be distinctive 🙂
And finally, a photo of Parsnips with her bald patch: 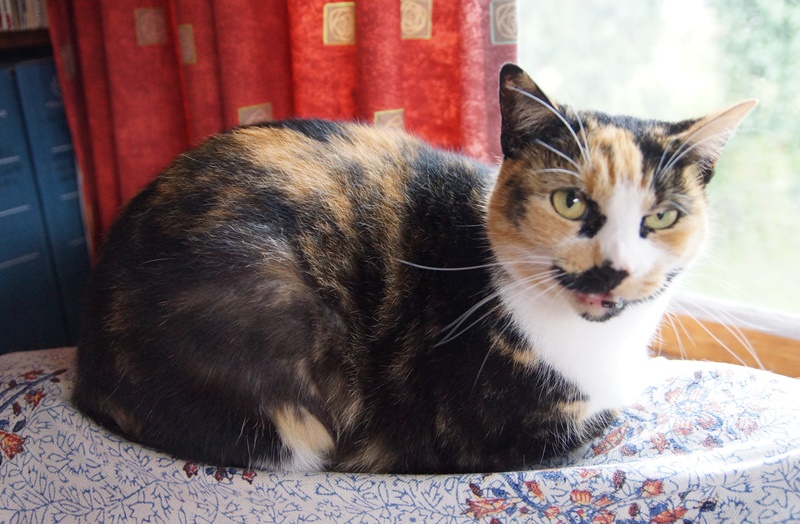 And Parsnips mid-yowl, complaining that I’m wasting time taking her photo when I could be scratching her under the chin, which in her opinion is one of the only two reasons humans have hands (the other, of course, being to open the fridge door). 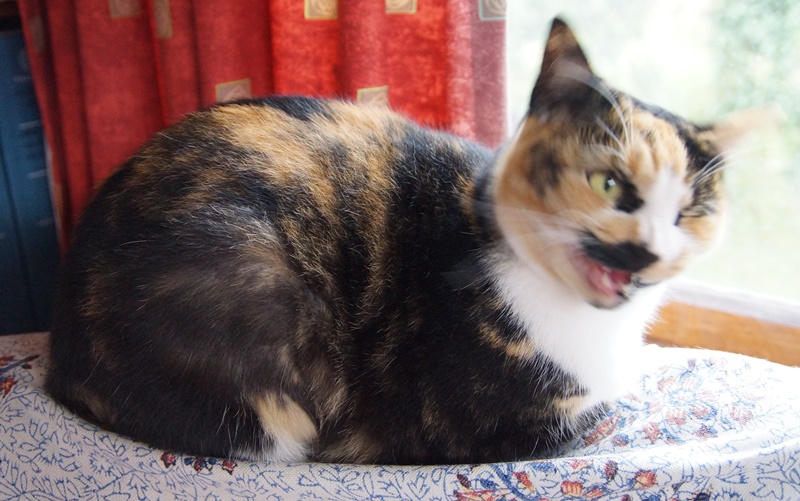 his year is seriously racing past.  It’s the end of the academic year tomorrow, and already murmurs about Christmas parties are arising from various quarters – where did the year go???  I’m sure it was only a couple of weeks ago that I finished studying myself, but a whole semester has gone past since then!…

nd of year party for Toastmasters tonight, with charades followed by one of those Secret Santa swaps where you get to steal gifts.  All the gifts had to be home-made, so there was loads of imagination in them – some were crafted, some baked, and one was a gift certificate promising a couple of hours’…

It’s a cold and miserable drizzly day (I assume this is the far edge of Cyclone Pam that’s sitting somewhere over the North Island at the moment), and I’m feeling cold and miserable and loaded with the cold.  And I can report that daytime TV is just as lacking in entertainment value as it ever…

ellington was wonderful (despite the less than stellar weather). And the conference was amazing. As well as reminding me that being involved in the union wasn’t all hard work, and there’s actually a lot about it that I miss, being in a queer space for the first time was incredible – just being in amongst…

oastmasters tonight, and my fifth prepared speech, which means I’m half way through the first qualification, “The Competent Communicator”.  Each speech is supposed to focus on a particular skill, and tonight’s was on using body language.  I was instructed to pick a topic that would let me use lots of body language while talking, so…