At Toastmasters last night, the Table Topics (impromptu speaking segment) were themed around awful and awkward Christmas gifts, and the difficulty of pretending to be grateful for them.  Much hilarity ensued, with the result that it was decided that at our end of year Christmas party next week, our Secret Santa game (where everyone brings a wrapped gift, which all go in a pile so nobody knows who gave what, then everyone either picks a present to unwrap or “steals” a present from somebody who’s already opened theirs) should be similarly themed – that everyone should bring along a dreadful or embarrassing gift. But under $5.
I was brainstorming ideas with my colleagues at lunch today, and we agreed that the most awful present anyone could give you would be a tin of foot odour powder.  I thought that was possibly a little *too* awful (and probably over the $5 limit), but it reminded me of Christmas parties in the tiny town we lived in when I was a very small child, where Father Christmas would be in attendance and hand each child a small gift, probably donated by the CWI ladies (Country Women’s Institute, who were *huge* in that town).  For some reason, one of the most popular* gifts was a bar of soap wrapped in a face cloth, artistically folded into the shape of a swan or some other whimsical creature.
*Popular only in terms of the number given out – its popularity among the kids who received one was probably somewhat different. I can’t actually remember if I ever received one myself, but I can imagine the disappointment if you thought you were getting a toy from Santa, and ended up with soap!
Anyway, inspired by this vague memory, I decided to have a go at recreating this not exactly terrible, but still so terribly disappointing, present.  So I stopped off at the supermarket to acquire a cheap face cloth and even cheaper bar of soap, found some googly eyes in my craft stash, and set to work on my artistic masterpiece.  I was hampered somewhat by the fact that I couldn’t really remember much about what they looked like, or how they were constructed, so my swan turned out looking more like a deformed Loch Ness monster crossed with a peacock: 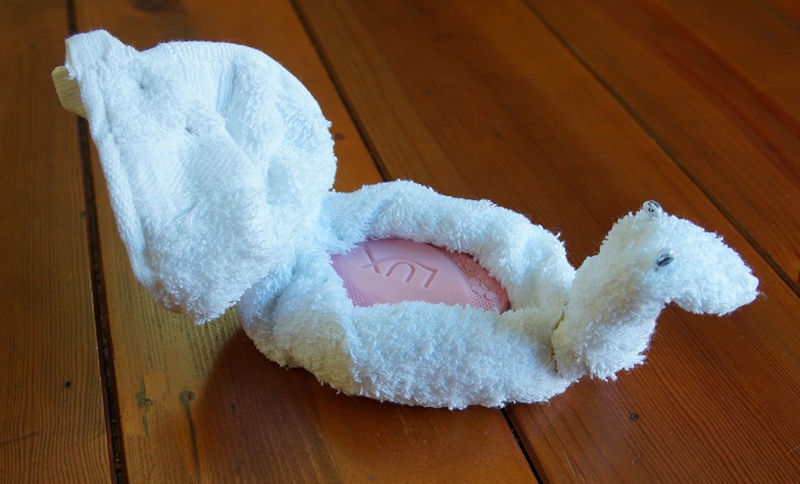 But I reckon I totally nailed the whole “a present you’d struggle to be grateful for” thing!

(Very late (blame the Flickr debacle) and I know I’m way behind on blog posts (and vlogs), but I’ll get there eventually – life has been busy!) Projects completed in 2018: January I made a lot of progress on projects, but didn’t actually finish any of them. February Lego Quilt March Birds in Flight quilt…

The good news is, it started raining yesterday (I’ve never heard so many people saying “Yay, it’s raining!” instead of “Ugh, it’s raining”). The bad news is, it’s the wrong sort of rain. It’s just been a light drizzle – not enough to put the fires out, but enough to hamper visibility so that the…

hat took a lot longer than expected (probably something to do with the number of unpickings and resewings I ended up doing, and not at all helped by changing my mind at the last minute about how I’d done the body of the butterfly (I’d originally used a lighter shade of grey to contrast with…

n all my star-struckedness (yeah, not really) yesterday, I forgot to tell you about the speech I gave at Toastmasters on Tuesday night.  My seventh official speech, so I’m creeping ever closer to ten and finishing the first qualification.  As with everything else in my life at the moment, the race is on to complete…

The spambots have obviously discovered the new DD, posting weird random comments to random entries. Sometimes the total disconnect between entry and comment is amusing, in how blatantly obvious it is that a human reader was not part of the process. A couple of examples from today: “That is a thing I must find more…