ecember weather is notoriously changeable in Christchurch, but it’s been outdoing itself this year – the temperature has been going from high 20s to just above freezing and back again in the space of a few days, and yesterday we had two huge storms, with thunder and hail and all sorts of drama.
The first storm was incredibly loud – there was a clap of thunder right over the house that was one of the loudest I’ve ever heard (and which terrified poor Parsnips, who dashed into the tiny space behind my desk and refused to come out for an hour), followed by huge hailstones (well, marble-sized, anyway), which were falling at an angle, so made the most incredible racket hitting the corrugated iron fence that runs along my driveway. With the size of them, I didn’t want to go out and take photos while they were falling, and they melted pretty fast, so I didn’t get any decent photos, but I did capture a small drift developing against the fence (ignore the unmown grass…) 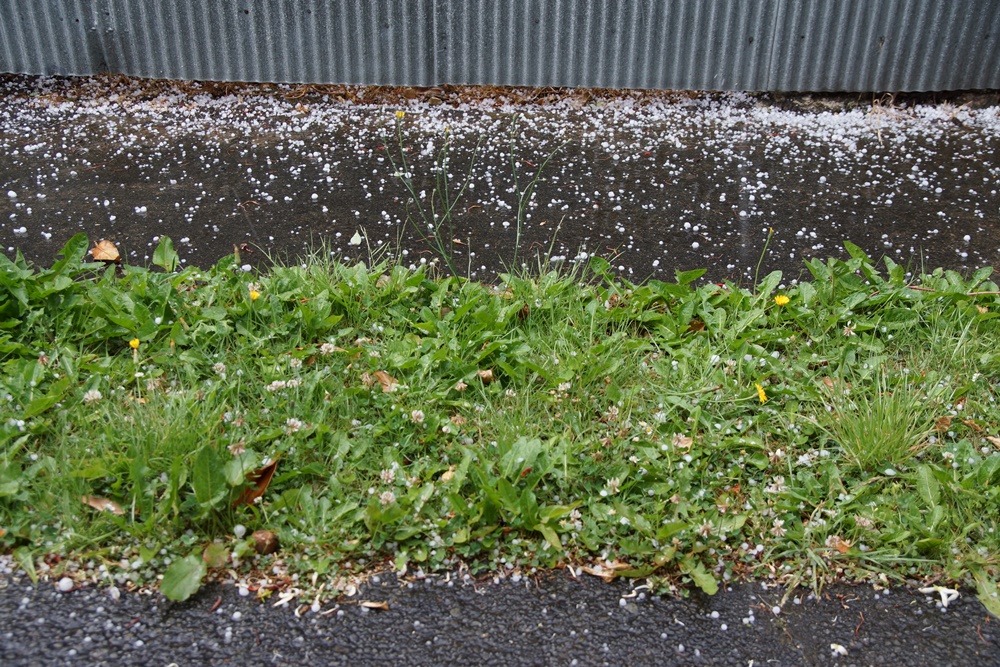 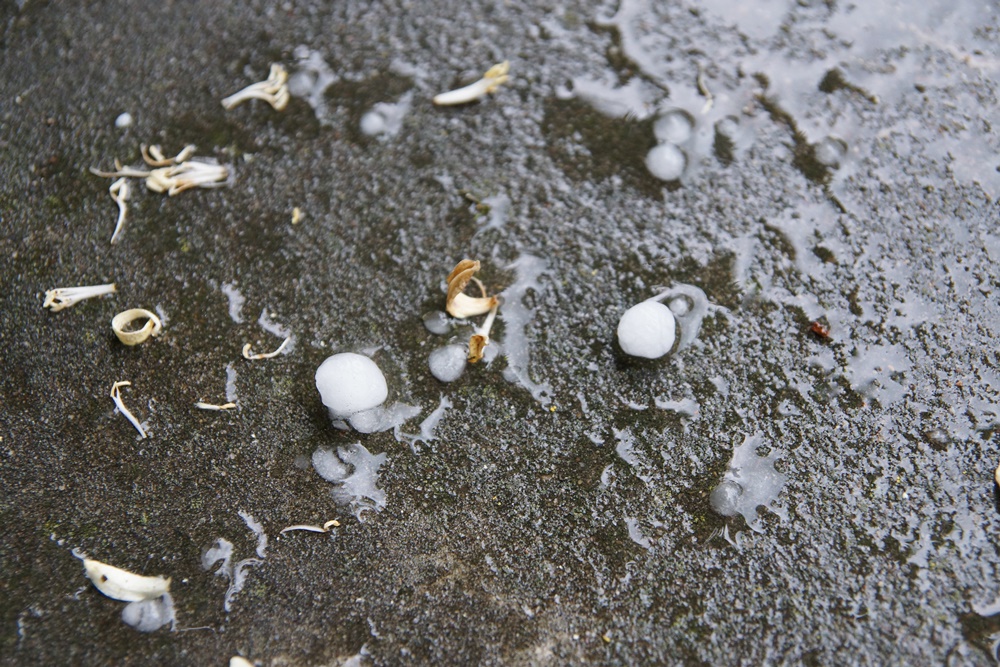 The second storm, an hour or two later, wasn’t as impressive, but it still dumped quite a lot of hail (and re-terrorised poor Parsnips, who was just starting to cautiously emerge from her hiding spot).
The storms must have been moving pretty fast, too, because I got an email from Mum at about half past 10 saying they’d just had thunder and hail in Alexandra, and it hit Christchurch less than three hours later. It’s roughly 320 km as the crow flies from Alexandra to Christchurch, so assuming it was the same storm, that means the front must have been travelling at around 100 km/h. Pretty impressive!

Somewhere over the last couple of weeks I did get around to putting up my Christmas tree, but I forgot to take photos at the time. So, to rectify that: 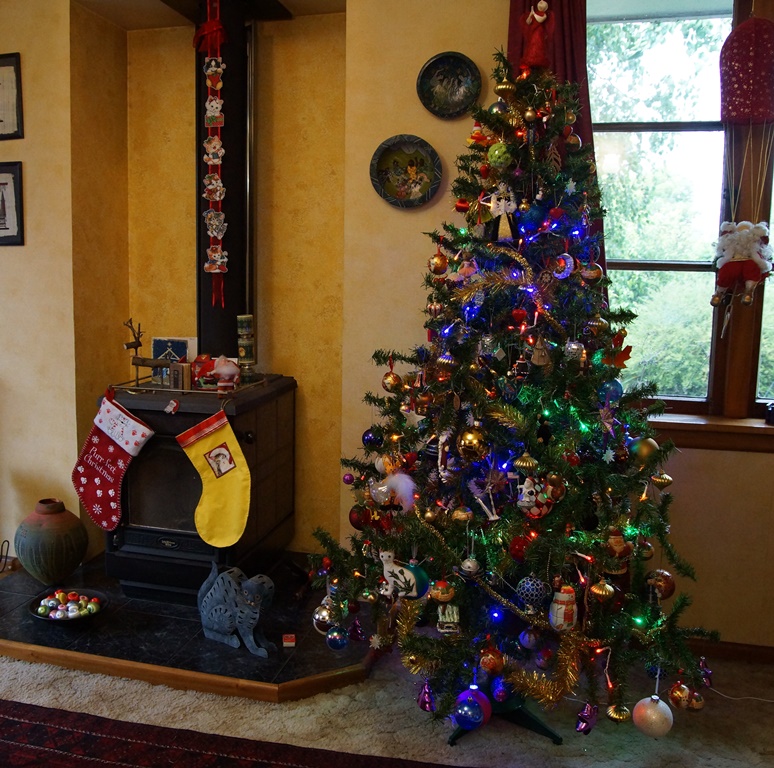 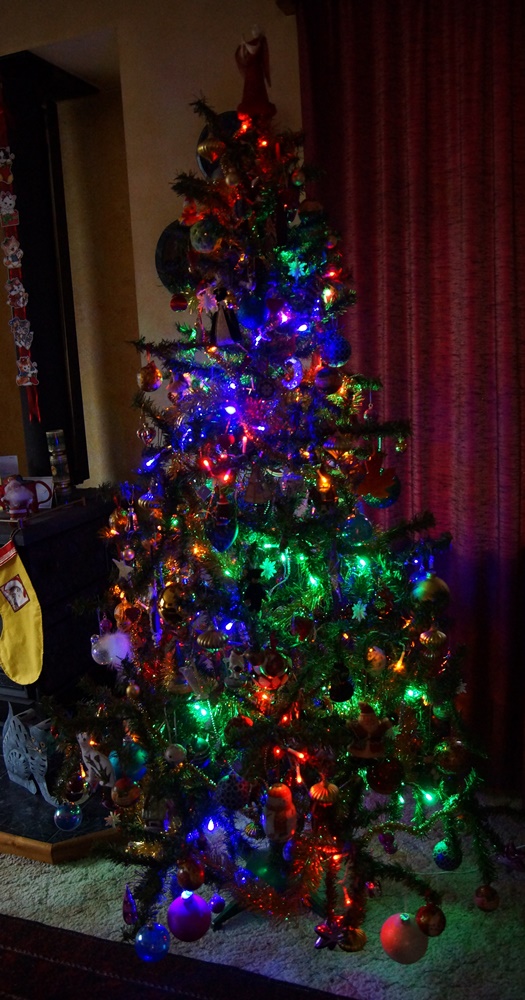 We’ve put our Christmas “tree” up at work, too – or at least decorated our door. There’s photos on our blog.
On Friday evening, Lytteltonwitch and I went out to Shands Road to see the lights. The Press had been making a big deal of the lights, saying they were completely redesigned from last year, but it turned out there were only a few small changes here and there. I was glad I hadn’t bothered to take my camera this time, because the photos would have all looked the same as last year’s. It was still interesting though, because we went out a little earlier this year, so got there while it was still light enough to see the structures holding up the lights, so it was cool to see how it was all done (and had the bonus that it was still early enough to get a park quite near the lights – last year we had to walk for miles!). Plus it was worth the entry fee just to see Lytteltonwitch, who claims to love spiders, be scared out of her skin by a mechanical spider that jumped out at her from one of the displays (for some unknown reason they always have a Halloween-themed display in amongst the Christmas lights, even though it doesn’t open until December, well after Halloween), while I was completely unfazed by it – though her scream did make me jump! I don’t think we’ll bother going back again next year though.

Christmas-present spoilers again – all that bad weather at the weekend meant I made good progress through my production line of mini-quilts.
Finished binding these two: 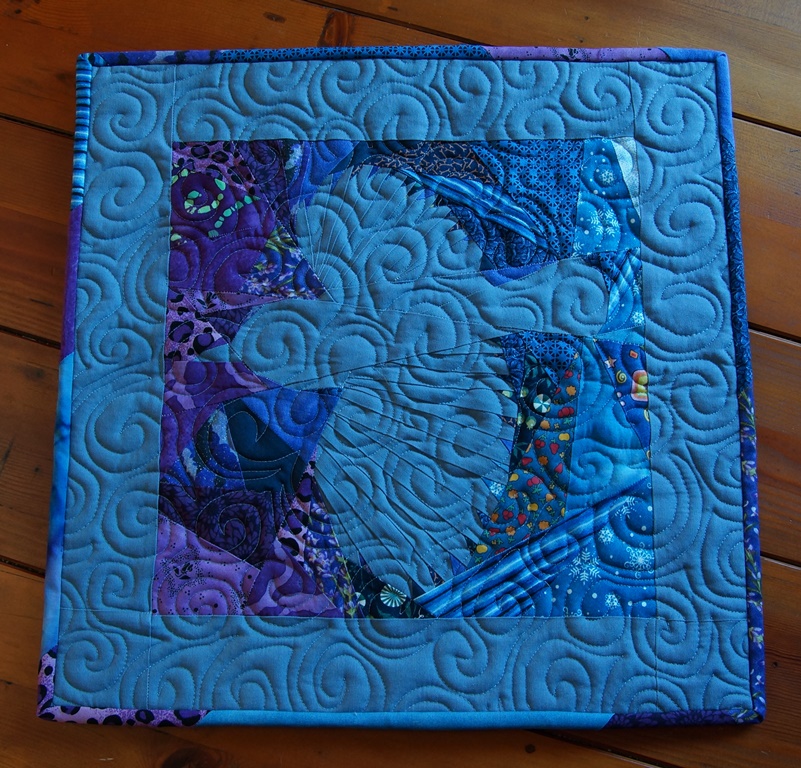 And quilted the other stars (though didn’t quite finish putting the binding on):

I’m pretty pleased with how the quilting went on this one – I found a new Christmassy design to try, and, after a bit of practice, managed to get it flowing reasonably well. Here’s a close-up of the back so you can see the quilting a bit better: 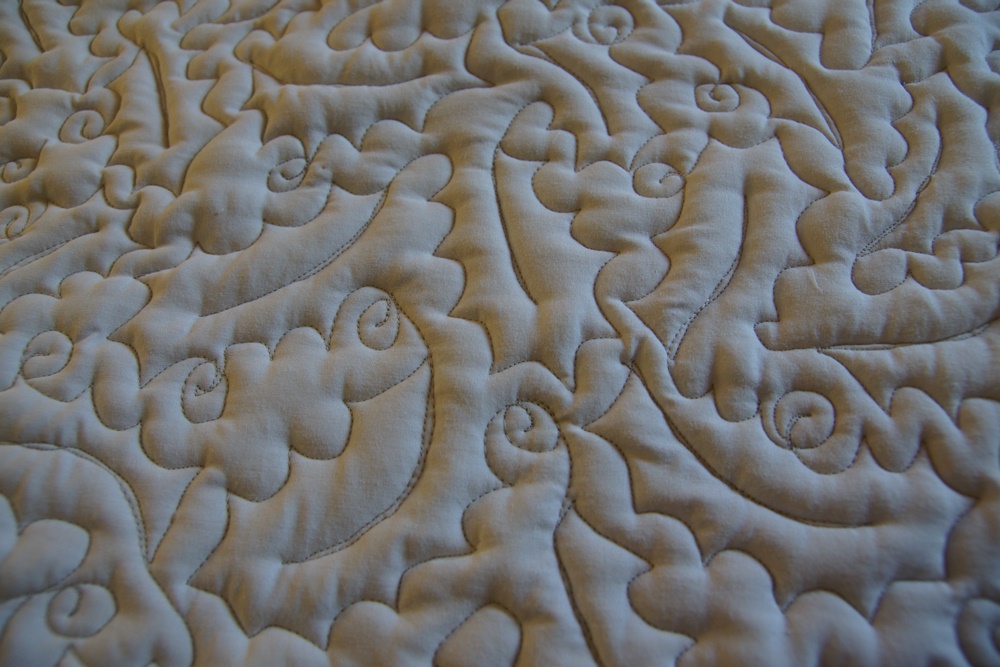 While I was googling Christmassy FMQ designs, I was distracted by another project I spotted on this blog – some very clever trees made from half-square triangles. So of course I had to give it a go. And then make a second one, just to perfect the technique (and also because I still needed a couple of presents for work team members). They’re less fiddly to make than they look, so I managed to get them both sewn and quilted on Sunday, so I just need to finish off the binding, and they’ll be done too.

The Christchurch Bloggers Christmas party was tonight, which means I can finally show you the project I was working on when I attempted to cut my finger off: Such a simple little bag, you wouldn’t think it could have caused so much trouble, would you? The recipient was really pleased with it anyway, and with…

I am deep in the throes of data modelling, trying to find a statistical model that adequately describes my data so that I can produce some results to write about in my thesis.  In practical terms, what this means is feeding the computer my data plus a long equation that contains all of the factors…

fter spending most of the morning cutting scraps of material into strips, and most of the afternoon sewing them back together again (who ever said quilting was a logical sort of hobby…), I’ve managed to complete a whole six blocks of my quilt.  Good thing I’m not working to a deadline this time! Pretty pictures…

Or now? In case you’re still puzzled, it’s supposed to be a hedgehog (based loosely on this one, but simplified and a lot smaller).  It’s destined to be a very mini quilt for Heidi, my other supervisor (not the one I made the baby quilt for), who loves hedgehogs, so her office is decorated with…

Because I couldn’t quite make up my mind what fabrics to use for the next bird, this afternoon I laid out all the ones I’ve done so far, hoping seeing the overall effect would help me decide.  It’s the first time I’ve actually looked at them all together, and they look pretty impressive: They also…