Going home today, but in the meantime I managed to fit a lot into the last few days of my holiday. (Note to vegetarians, vegans, and those of a delicate constitution, you probably want to skip this first paragraph).  First was a hunting expedition on Saturday night. During dinner I’d mentioned to Brother that it was a pity he was so busy (being in retail doesn’t give you a lot of free time over the Christmas period), because otherwise we could have gone out hunting together.  So he suggested we go out for a night shoot (spotlighting for rabbits), and invite Mum’s visitor along too.  It doesn’t get dark until well after 9 here, so it was a very late night (we didn’t get home until about quarter past 1), but we got about a dozen rabbits (and a stoat – they’re a pest that kills native birds, so we always shoot them if we see them, though obviously we don’t keep the meat), and I was relieved to discover I’m still a decent shot even though I haven’t been shooting for years, so I didn’t embarrass myself too badly compared to the guys 🙂 (Actually, according to Brother, I got the shot of the night – a head shot at extreme range.  Total fluke, but I’ll accept the praise anyway :-)) We did see some deer, and thought about shooting one too, but then brother pointed out we’d have to spend another hour gutting and butchering it if we did, and anyway he’s already got a freezer full of venison, so we let them live for another day.
It’s Dad’s 70th birthday later this week, so seeing as I’m heading home, he decided to have a birthday barbecue on Sunday.  I suggested to the kids that we make him a birthday cake, and then SIL suggested we make it a golf cake, so we spent the afternoon making and decorating it. The kids each contributed to the decorations, and although we’ll never be professional decorators, we had a lot of fun, and I think it turned out looking pretty good: 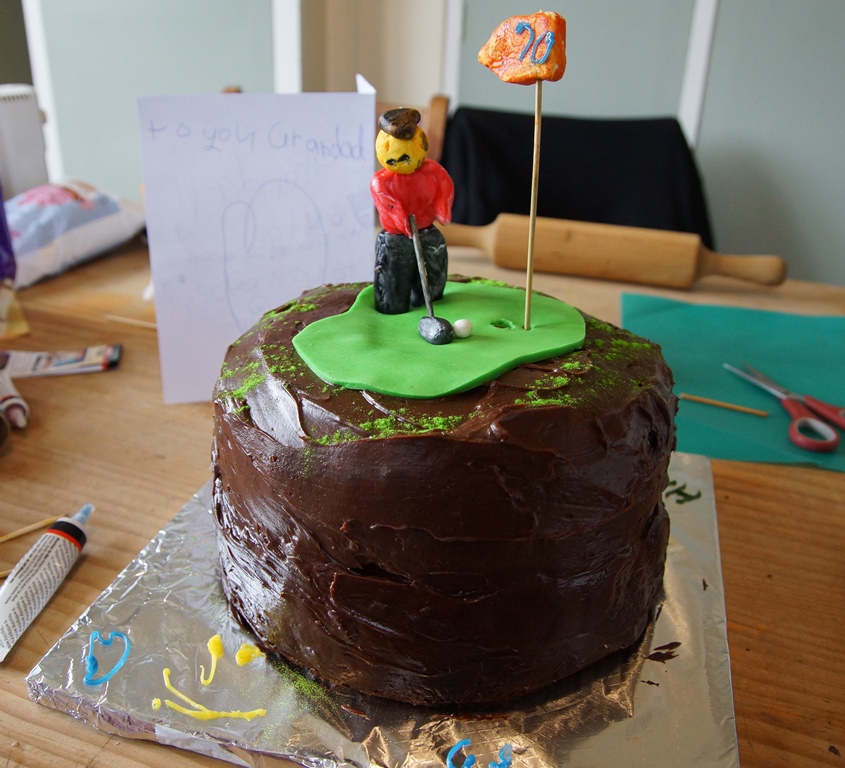 (The weird squiggles on the cake board are a heart and a smiley face – Niece put herself in charge of the writing…)
And once the candles were lit, it looked even more impressive (Brother declared it to be “golfing in the fires of Hell”): 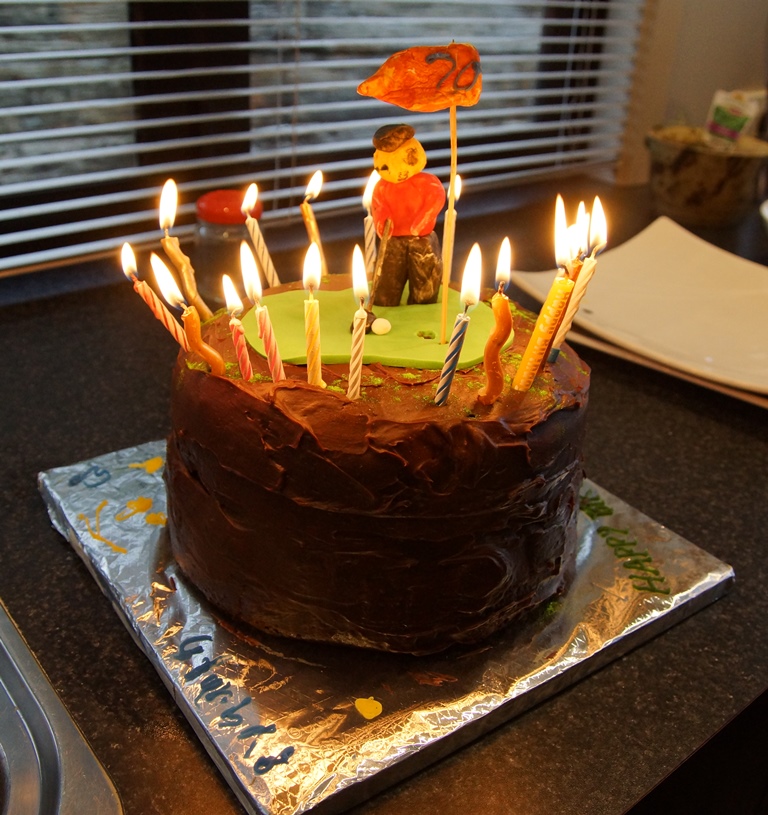 And Dad was greatly amused by it, which is the important thing 🙂 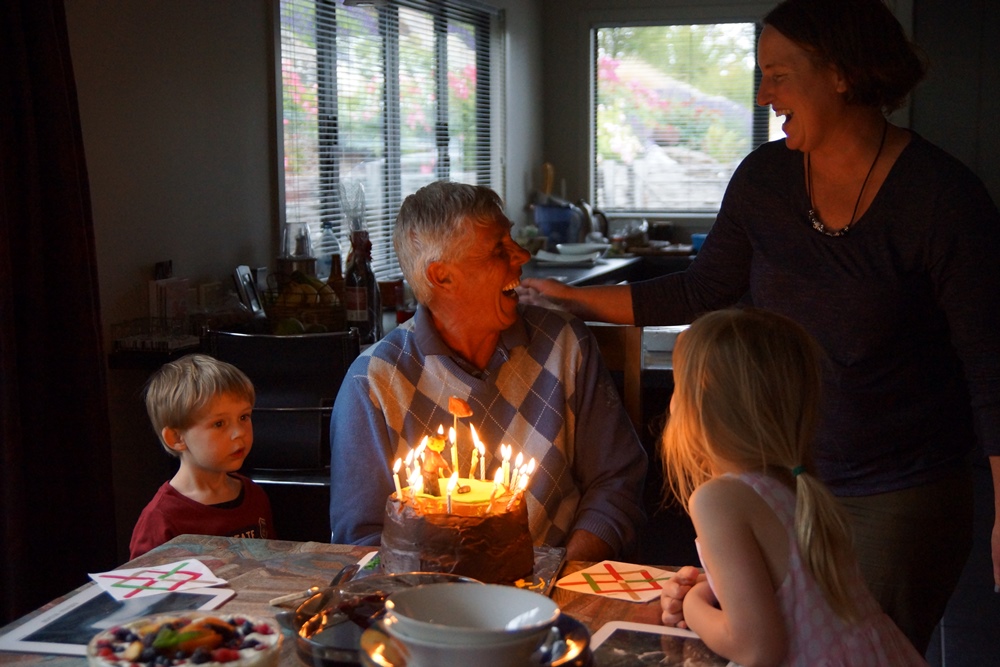 Of course, as we were having a barbecue, it turned out to be the first cold and miserable day after days of intense heat, but that just meant we ate inside, and those in charge of the barbecue had to wear warm coats to cook in. 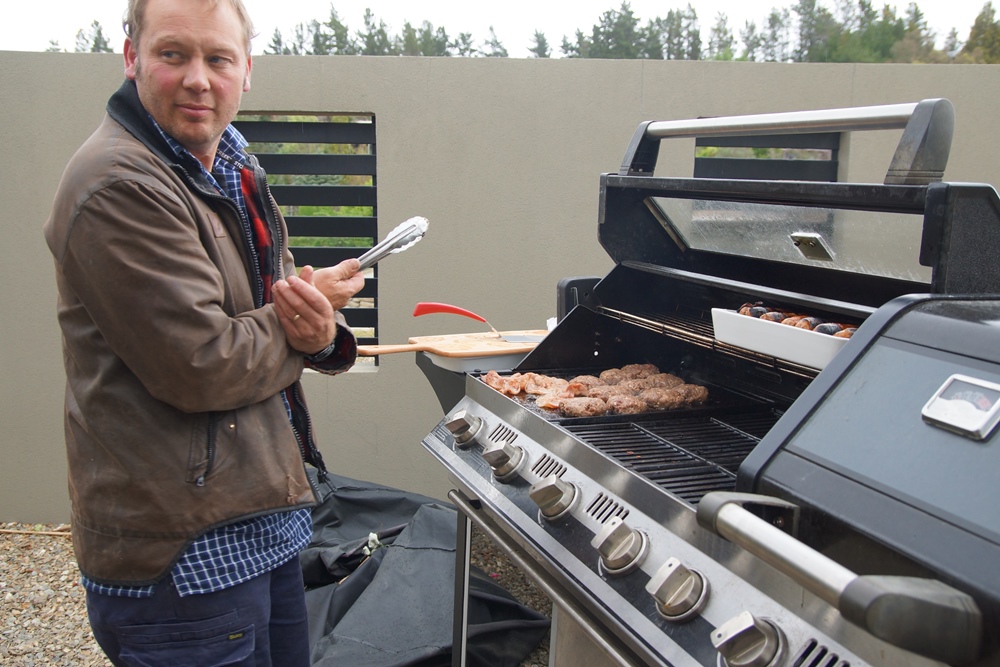 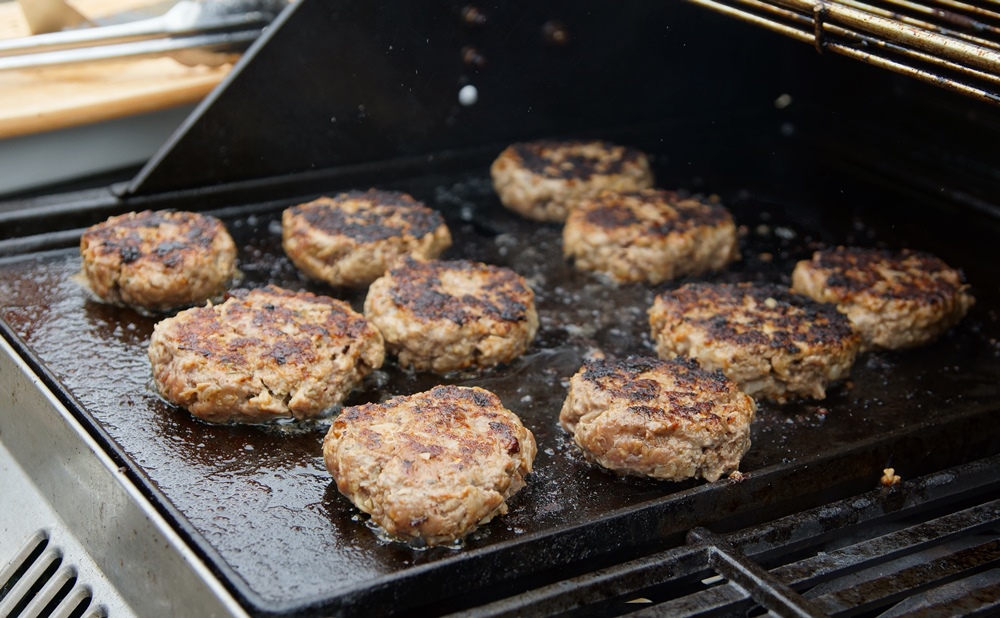 Venison burgers!
Dad wanted a photo with all the grandchildren and grand-nephews and nieces (well, at least the small selection that were there – as he comes from a family of 11, his total number of grand-nephews and nieces is probably edging close to 100 by now). He may have had a fancy family portrait in mind, but it quickly descended into chaotic laughter, as first Brother decided he qualified as one of the kids and wanted to sit on Dad’s knee, then I handed over my camera to SIL so I could get in on the action too, then one of the smallest members of the family started crying, which set off his sister, and then Brother said something along the lines of “if you can’t beat them, join them”, so he and Nephew #1 started wailing loudly, and the final portrait ended up with everyone either crying dramatically or laughing uncontrollably. Which is as a family portrait should be 🙂 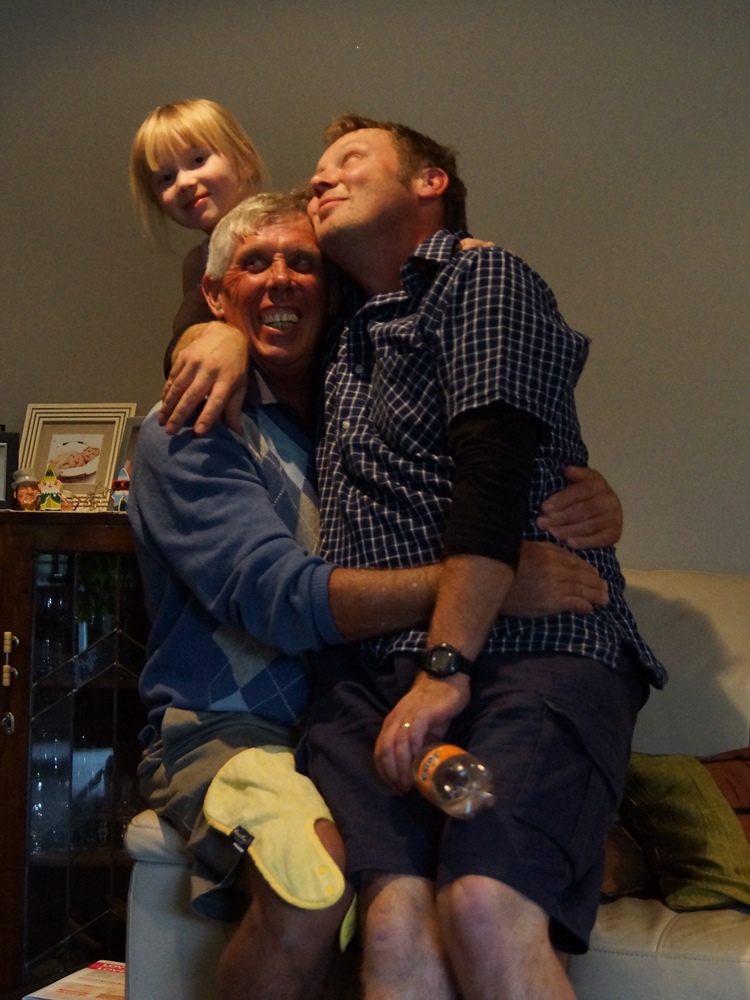 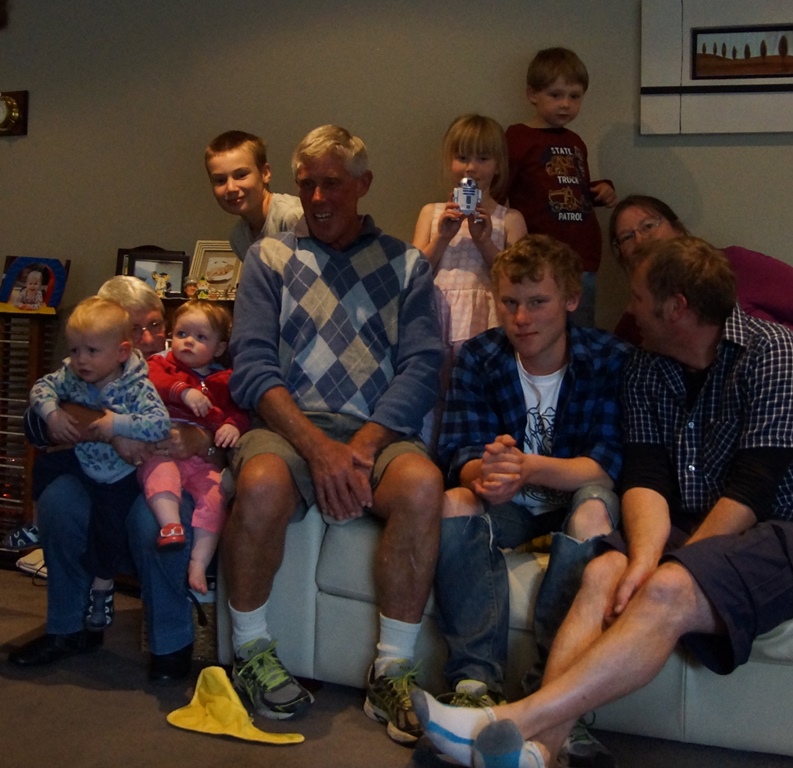 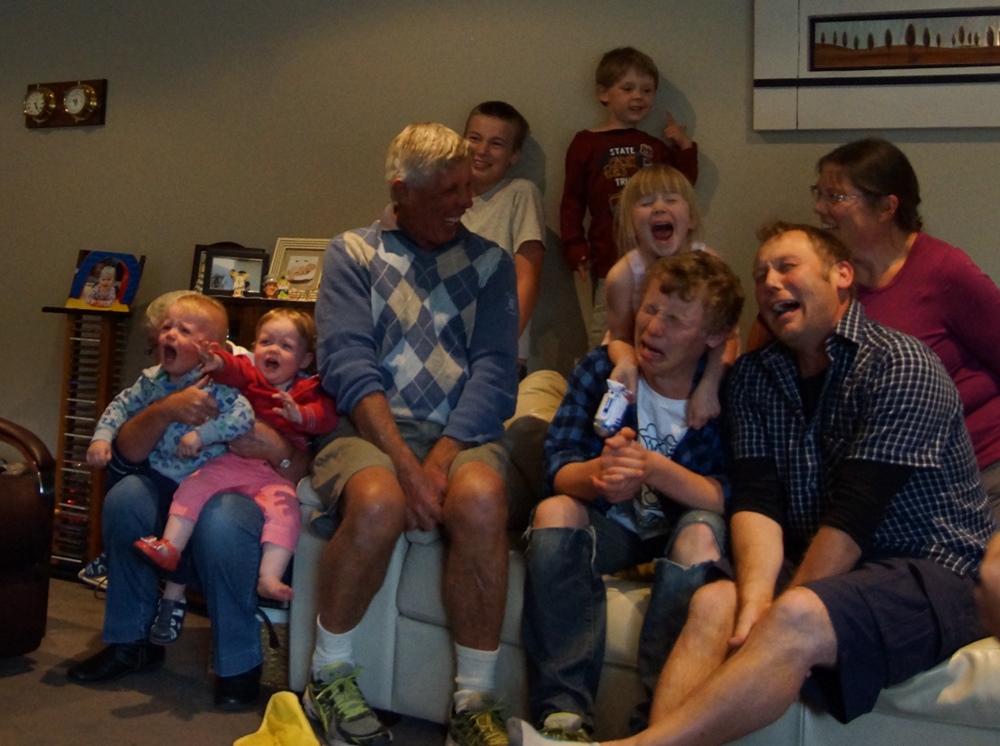 Proof that Brother really is one of the kids: all completely engrossed in a Walking With Dinosaurs movie 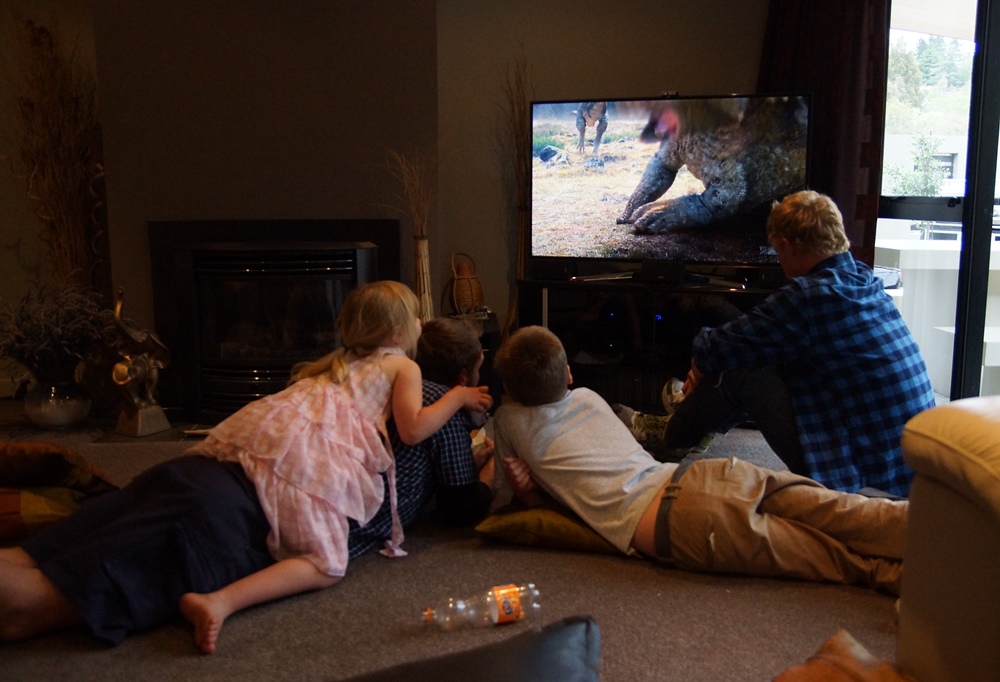 So what with cake, photo silliness, tickle battles, and other general chaos, it was a really fun night.
Then last night we finally got to see the new Star Wars movie. In preparation, the kids and I spent the afternoon watching episodes IV-VI, while Niece and I painted (there was no way she would be able to sit through three movies without something else to distract her!). Mum and I had bought some pre-printed canvases from the Warehouse, so it was more of a colouring-in exercise than serious artistic endeavour, but they turned out looking pretty cool (I didn’t manage to get a photo of the ones Niece painted, but they were… colourful 🙂 ) 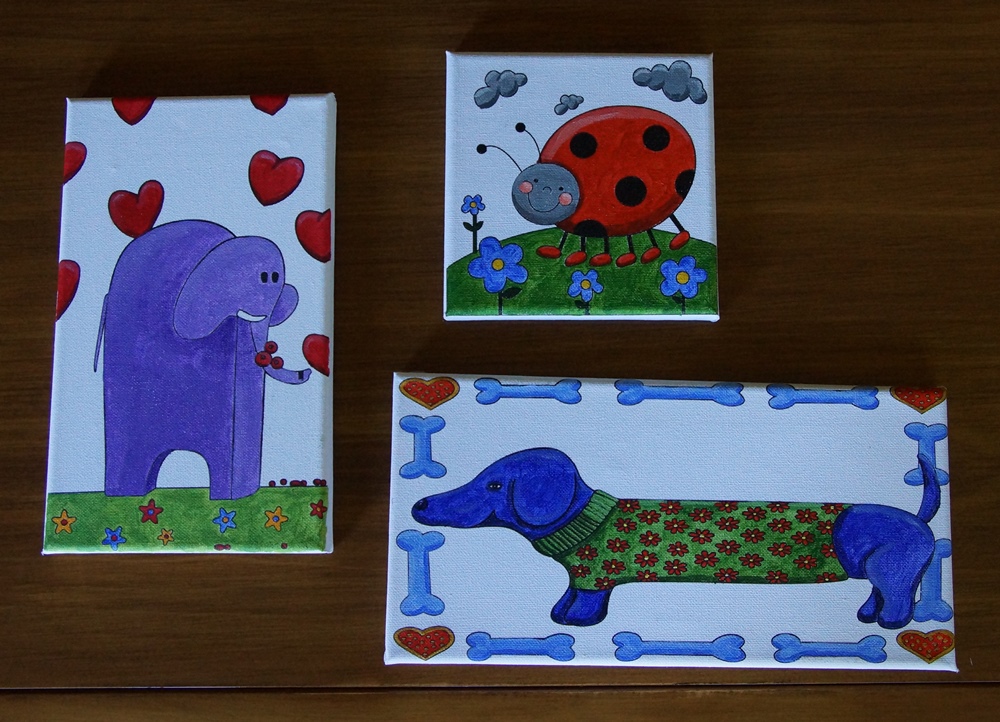 After dinner we headed to the picture theatre. Alexandra didn’t have a theatre for many years, because the town was too small to sustain it, but in the last few years a group of volunteers have been running a theatre out of the back of the museum.  It’s very small, only a few rows of seats, but they still get in most of the big movies, so it’s been doing very well.  But being run by volunteers means not everything goes according to plan – like last night, when we turned up to find the doors locked and everyone waiting outside.  It turned out the projectionist for the previous showing had locked the keys in the office, so the evening volunteers couldn’t get in, and the only spare key was held by the museum’s director, who lives in Bannockburn, half an hour’s drive away.  So we all had to wait while he drove down to Alexandra with the key.
But being small town, nobody was particularly fazed, and we all just stood around outside chatting, and the general feeling was that it wasn’t as bad as the night the projectionist forgot to turn on the projector, so the movie had sound but no pictures…  Eventually the key arrived, and (after a bit more confusion about the tickets, because Mum had bought us vouchers, but whoever sold them to her hadn’t written it down on the right page of the notebook, so the ticket seller couldn’t tick them off on her list…) the 7.30 screening became an 8.30 screening instead.
We all enjoyed the movie tremendously, and talked excitedly all the way back to Mum’s place, where we continued our analysis over hot chocolates.  I’ve already written a first impressions review, but I can say I enjoyed it even more the second time, especially hearing the surprised gasps from either side of me at the crucial moments (I’ve managed to not let slip to any of Brother’s family that I’d already seen it :-)), and doubly especially getting to talk about it with them afterwards.  Totally transported back to being a kid again 🙂

Despite the mostly warm weather (it’s been back to typical December drizzle this week), my little cucumber and watermelon plants haven’t grown all that much in their pots – a couple of extra leaves each, but that’s all.  So I assumed my usual anti-gardening skill was at work as usual, and they’d come to nothing….

It’s 4 am here, and I’m just about to leave for the airport, bound for Dublin. First stop Sydney, for lunch with the local oookcrossers, then (after the super-long-haul to London) a couple of days with the out-laws in Wales, then I hitch a ride on the witch’s broomstick and we’re off around Ireland for…

abbit is a very pleasant meat to eat, but it smells disgusting while it’s cooking, especially when boiled.  Same goes for hare.  I’m currently cooking meatballs made from some hare mince my brother gave me, and even though I know they’ll taste fantastic once they’re done, I’m trying to avoid spending any time in the…

I promised you a photo of Harvestbird and I receiving our Meritorious Service awards from the union.  Thanks to local organiser Paul Corliss, who gave me a copy of the photo he took (and permission to post it here), I can finally fulfil that promise: I think I’ve mentioned before that the union offices are…

I just noticed something very strange.  My last week’s worth of posts only show up when I’m logged in.  If I’m not logged in, I can only see posts up until 6 February, even though all of my posts are public. Logged in view of my homepage: Same page, but not logged in: A completely…