I’ve actually been home for a few days, but they still felt like holiday days, mainly because Brother and the two boys came back to Christchurch with me.  The trip to Christchurch was their (and my!) Christmas present, because SIL had bought us all tickets to go to a Weird Al Yankovic concert.  The boys are really into his music, whereas for me it was more of a nostalgia thing – I used to listen to him back in the 80s, but didn’t even know he was still making music. The boys quickly educated me though, playing his CDs to catch me up on the last 30-odd years.
We drove up on Tuesday night, leaving Alexandra after Brother finished work.  It’s a six hour drive to Christchurch, so we were going to be very late getting in anyway, but it was made even later by stopping to fish near Twizel. Brother wanted to break up the journey a bit, plus I think it was probably the first chance he’s had to go fishing since the Christmas season started.  I couldn’t fish (you need to pay a licence fee to fish in inland waters in NZ, and it wasn’t worth buying me one just for one night), but I entertained myself taking photos until it got too dark, then reading by torchlight while the others fished.  There were definitely plenty of fish around, because we were constantly seeing them rising for insects, but they just weren’t biting. Nephew #1 was the only one who ended up catching anything – a smallish trout. 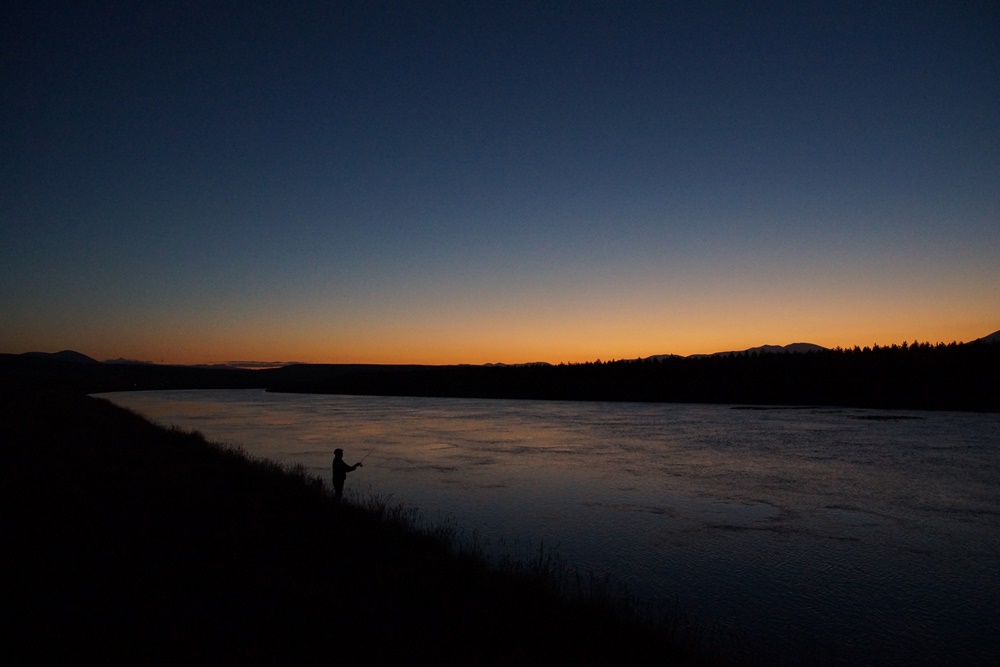 Luckily Brother is very comfortable with driving through the night (until recently he drove a delivery truck as a second job), because it was after 3 am by the time we reached Christchurch. The boys had slept most of the way from Twizel, but I stayed awake to keep Brother company. So it was a bit of a struggle getting up the next morning. When the boys woke up, I took them to a cafe for breakfast so that Brother could get some more sleep. He met us at the cafe an hour or so later, and we headed into town to the museum, which has an exhibition on of Leonardo da Vinci’s inventions. It was quite an interesting exhibition – they’d created 3D models of a whole load of his sketches, so you could see how they would have worked. Only a few of them were interactive, but there were computer screens where you could see some of the other models in action, which made it a lot easier to understand what was going on with the more complicated ones.
After we’d finished at the museum and wandered around town for a bit so I could show them the changes, we drove over to Dallington because Brother had to pick something up for the shop. It was quite sobering for Brother and the kids, who hadn’t seen any of the damage in the eastern suburbs before, to see how bad things still are 5 years on. Actually, it’s still quite sobering for me too – I don’t go over east very often, so I forget that the roads are still terrible, and there’s whole stretches of empty land where once houses stood.
We had pneumatic burgers (literally – they get delivered to your table via pneumatic tubes) for dinner at C1, then played tag on the ‘Tree Houses for Swamp Dwellers’ sculpture until it was time for the concert.  The concert was so much fun – we were all singing along (well, the boys were – I joined in on the bits I knew :-)) and dancing in our seats, and just generally enjoying every moment of it.  Weird Al was appropriately weird, and supremely entertaining, with costume changes for nearly every song, frequent incursions into the audience, and a really good mix of old and new songs.  I was so glad SIL and Brother decided to include me in the kids’ present, because I probably wouldn’t have chosen to go myself, so would have missed out on a really fun evening.
We tried to find somewhere to go for hot chocolates after the concert, but there’s very little open in central Christchurch at 11 pm on a weeknight (that’s the trouble with demolishing most of the city centre…), so after wandering around for a while, Brother decided to hit the road.  They had to drive back that night, because Nephew #1 has just started his first holiday job, picking fruit at a berry farm, so didn’t want to miss another day of work.  It was still after midnight by the time they got away, so they would have reached Alexandra just in time for Nephew to start work – hope he got plenty of sleep in the car on the way back!
I’d intended to spend Thursday unpacking, cleaning the house, and generally getting things done ready to go back to work next week.  But after two very late nights, I ended up sleeping until nearly lunchtime, so about the only thing I achieved yesterday was taking down the Christmas tree.  But today was much more productive – I got up early and cleaned and finished unpacking, then spent the rest of the day prettying up the ratty old footstool I bought in Alexandra.
I’ve been looking for a footstool to go with my wingback armchair for ages, but haven’t been able to find exactly what I wanted.  But while I was in Alexandra, Mum came across one in a second hand shop.  It was in pretty rough condition, but I reckoned it would look ok after a coat of paint and some new upholstery, so that’s what I did today. 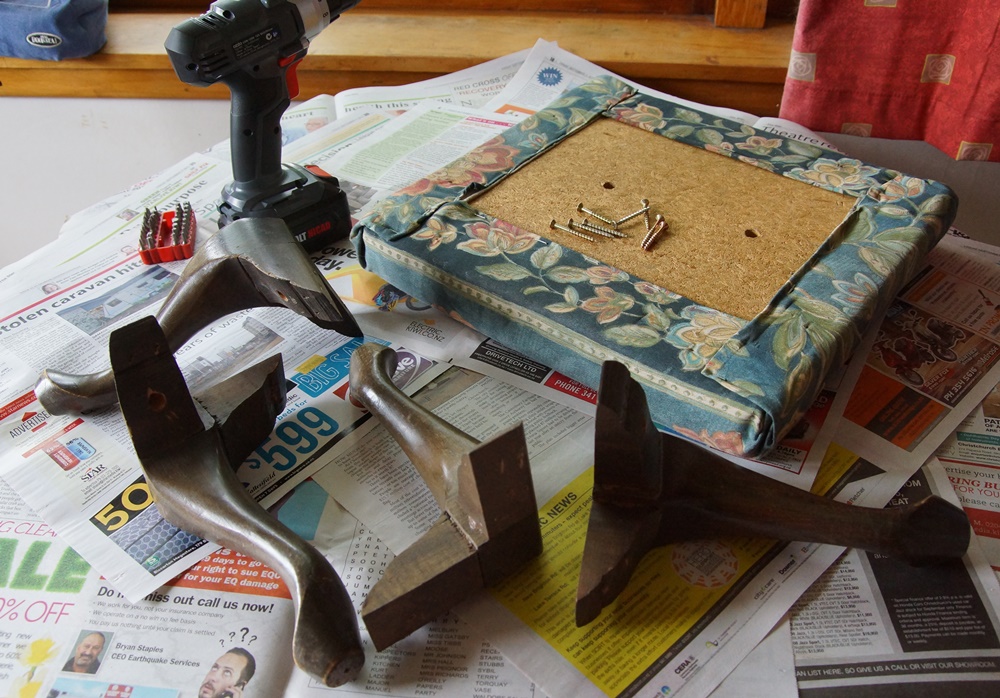 I forgot to take a “before” photo before I started taking it apart, but you get the general idea. 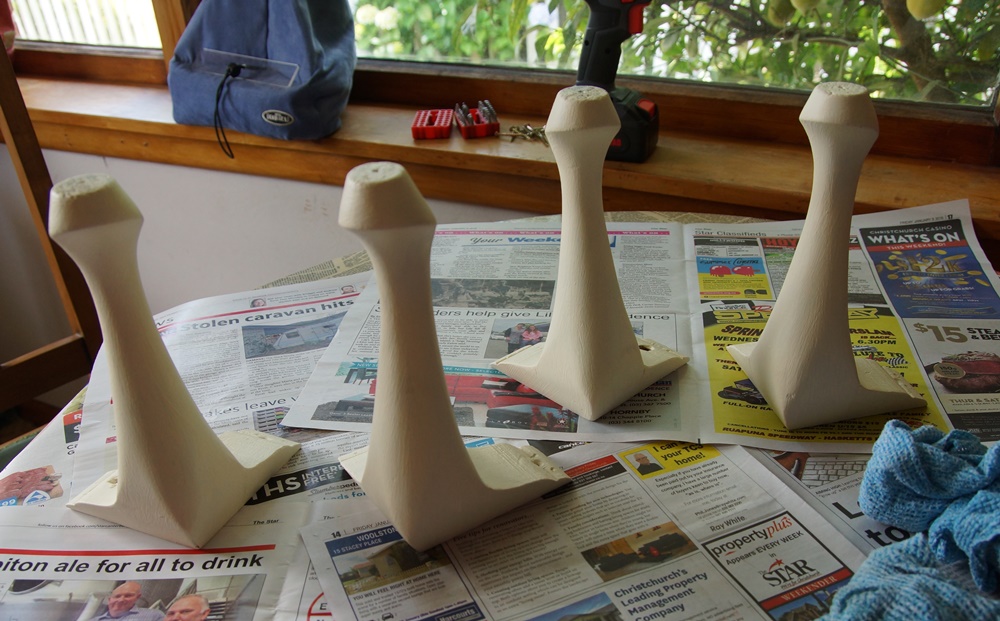 I had just enough of the chalk paint left from painting my side table to paint the legs. They definitely looked a lot nicer after several coats of paint and a finishing coat of beeswax. 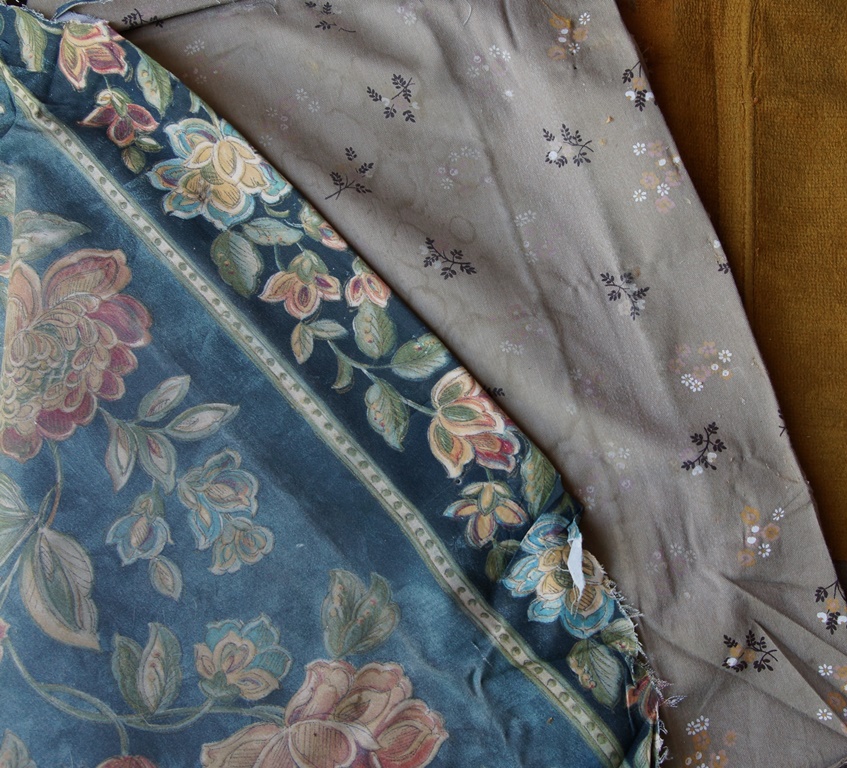 When I took the old ugly fabric off the top, I discovered an even older and uglier fabric under it, and then *another* layer of even older and even uglier (and starting to rot – it was falling apart as I pulled it off) fabric under that. It had been recovered so many times it took me forever to get all the staples out. 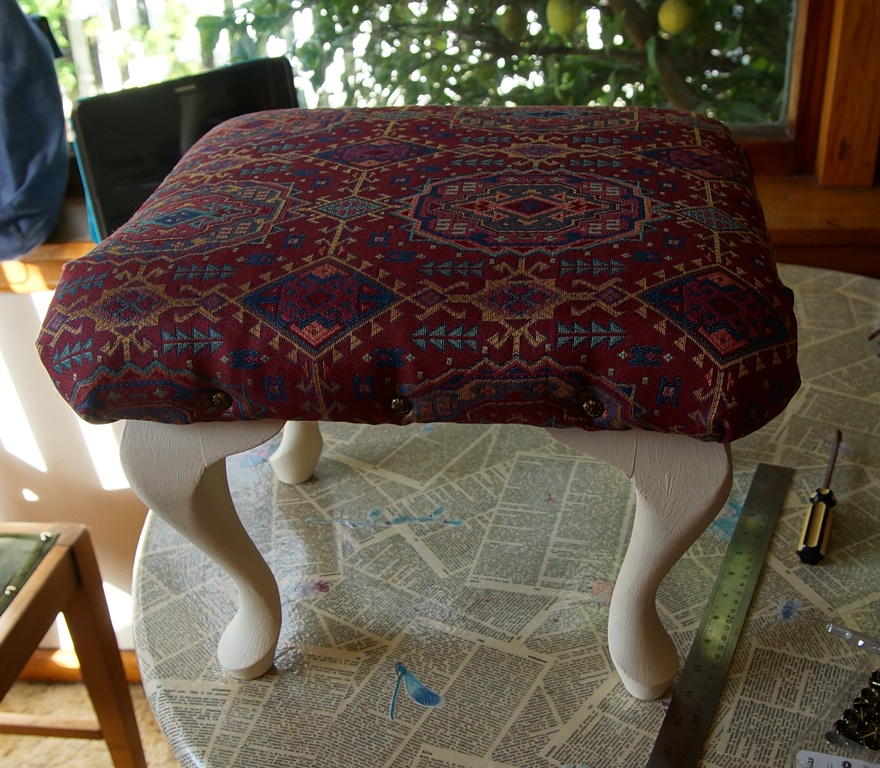 The finished product. The fabric is a piece of proper silk damask that I bought in Damascus many many years ago, and have been hanging on to waiting for the right project to use it in. Probably using it on my first ever attempt at upholstery wasn’t the most sensible idea, but better that than have it sitting forgotten in the bottom of a trunk for all these years. And anyway, I only used about a quarter of the fabric I had, so now I know what I’m doing (or at least, all the things I did wrong on this one…), I can use the rest for something else.
I think it looks pretty good anyway, especially in its new home 🙂 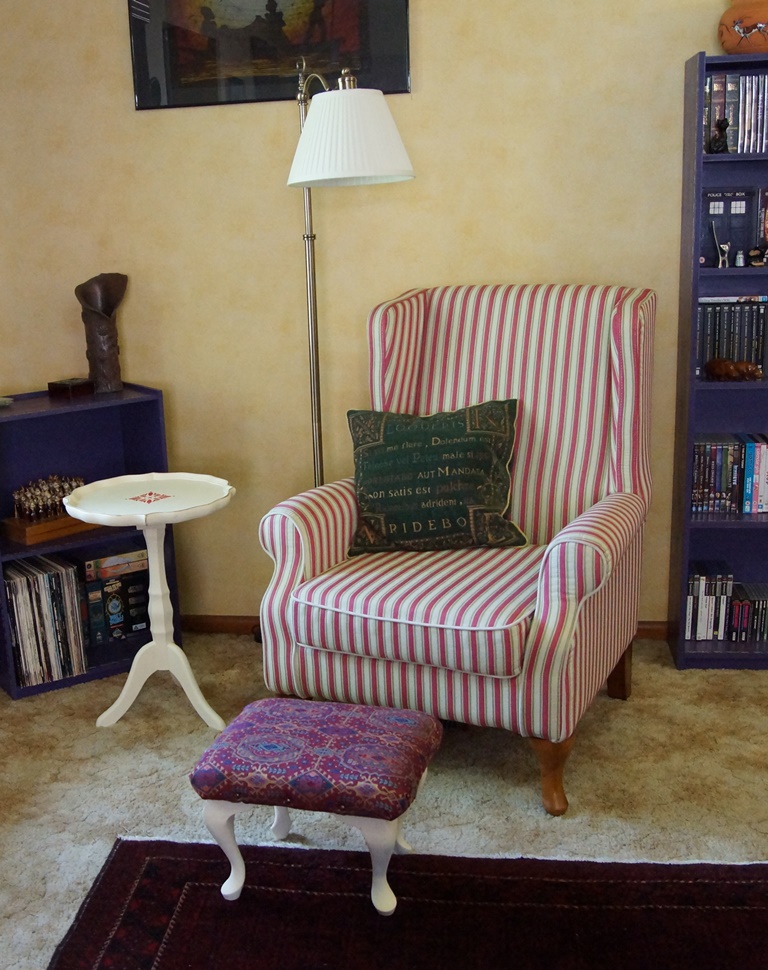 And with that, I’m declaring my holiday over, and it’s time to get to work. I’ve officially been enrolled for this Masters for a week now, and I’ve only done a couple of hours work on it, so from here on I need to put my head down and get on with it. So don’t expect to hear much more from me until 2017 – I’m going to be busy!

oday marks 121 years since women were granted the right to vote in New Zealand – the first country to attain universal suffrage.  To mark the day, the union hosted a women’s breakfast, and invited Christchurch Mayor Lianne Dalziel to talk to us.  It was pretty informal – although she started off with a prepared…

Finally got round to posting off my ornament for the Bookcrossing Ornament Exchange today.  Or actually, two ornaments: Yes, there is a bit of a theme there 😉  I got the felt pohutukawa flower ages ago when Mum was up and we were browsing the Ballantyne’s Christmas displays.  But then when I was in Wellington,…

So my sudden burst of trying to catch up didn’t last long. December got busy, not only with the usual round of Christmas and end-of-year social stuff, and a big project at work, but I also bought an extension to my season ticket at Little Andromeda (a really cool “pop-up” alternative theatre that opened in…

Yet again, a long gap between blog posts, mostly because life has been even busier than usual for the past couple of months. Work has been full of big pushes to meet deadlines, and outside of work has been full of social stuff and the usual degree of over-committing myself. And I spent the weekend…