After doing a pretty good job of trashing Queensland and the North Island, Cyclone Debbie reached us last night. This far south, it’s not a proper cyclone, just a lot of rain and a bit of wind, but it’s still been pretty miserable weather. The Press this morning was saying we’d get an entire month’s worth of rain today, which is not far off – the Met Service is showing 40.6 mm at the moment, with more still to come tonight.  The average rainfall for all of April is only 44.2 mm.
Luckily, we’ve so far escaped any serious flooding in Christchurch (about time the natural disasters passed us by!) – even the surface flooding isn’t as bad as it often is with heavy rain, because we’ve had enough rain over the last few weeks to keep the drains from blocking.  Normally rain in autumn means loads of surface flooding, because it’s such a dry time of year that nobody bothers to clear leaves from drains, so when it does rain they all get blocked immediately.
On totally selfish grounds, all this rain is worrying, because it’s graduation next week (which is held indoors, but we’re supposed to process into the venue, which we won’t get to do if it rains), and I’m having a party to celebrate, which for ages I’ve been planning to have in my back yard, because April in Christchurch is always dry and mild, and sometimes even still pretty warm.  Except the long range forecast for next week looks like this:

(Screenshot from)
A friend of Dad’s is lending me a couple of marquees, but at this rate my lawn is going to be a sea of mud, and it’ll be too cold even in a marquee. And I’ve invited too many people to fit inside my little house.
Oh well, I’ll just have to keep my fingers crossed that the Met Service have got it wrong. Long range forecasts can change dramatically before they arrive (one of the wonders of living on an island in the middle of a very large ocean, with pretty much nothing between us and Antarctica, is that forecasting our weather more than a day or two out isn’t exactly reliable 🙂 ), so I’m trying not to panic too much just yet. I suppose if the worst comes to worst, I can see if I can find somewhere to hire some duckboards and outdoor heaters…

As you may recall, I’ve been looking for ages for a footstool to go with my armchair. This has been a surprisingly difficult search, because I wanted it to be at just the right height so that my legs end up at the right angle when I’m sitting doing cross-stitch, so that I can have the pattern I’m following sitting on my lap and not slide off. I found and recovered an old footstool I found down in Alexandra last year, but it was a bit too tall. Lytteltonwitch found me another old stool which was closer to the right height, but a bit big and chunky. So the search continued.
Until Tuesday night, when I went to an upholstery class at Make, and made my own. 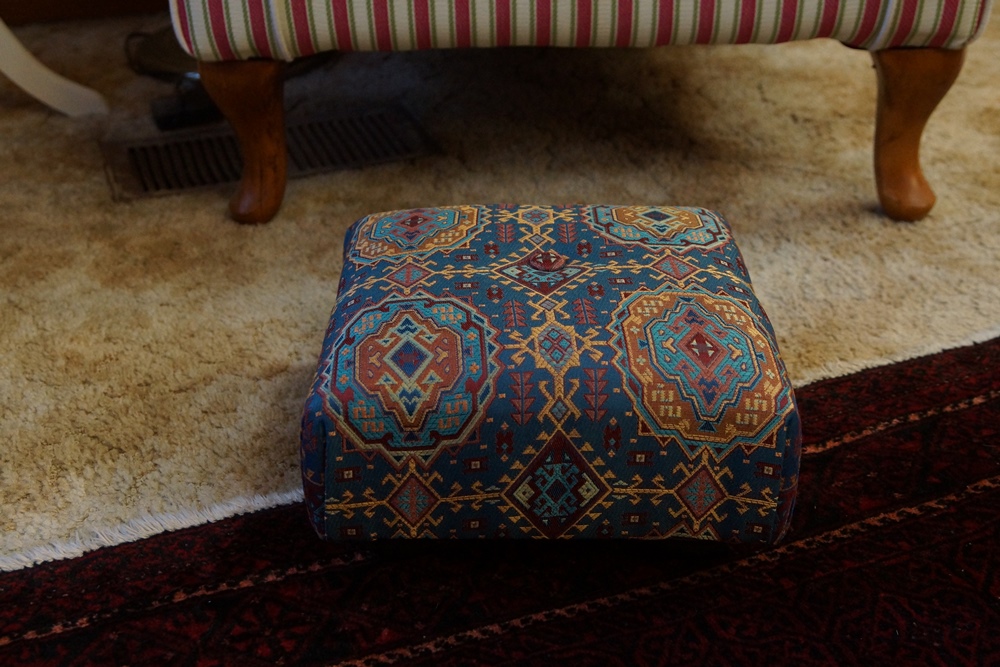 I used another piece of my Damascus silk to cover it, and I’m pretty pleased with how it turned out (except that my attempts to get the pattern of the fabric perfectly centred didn’t quite work, so the button ended up looking like it’s off-centre. It’s not, it’s the fabric that’s just a bit off-centre 🙁 ).
The class was really good, and I learnt a lot (like all the things I did wrong when I recovered the other footstool – I’m tempted to remove its cover and try again, now that I know what I’m doing), and best of all, I’ve now got a little footstool that’s almost exactly the right height.

or the last few months, when I was way too busy to do anything crafty, I indulged my need for creativity by watching YouTube videos on quilting, and looking forward to having the chance to put some of what I learnt into practice (oh, and by buying fabric.  Lots of fabric. (See, this is why…

igns are abounding that Christmas is on its way. I already have six different Christmas/end-of-year parties in my calendar (sounds like I have a really impressive social life, but the majority are work-related), and plans are being made in our corridor at work for the annual door-decorating competition (which, of course, our office won last…

arsnips has obviously been out hunting today, because when I got home and walked into the kitchen, I felt a lump under my foot.  A rather squishy lump.  And when I looked down, there was a slightly flattened mouse, oozing its innards onto the rug…  I suppose I should be thankful that she left her…

The good news is, I finished the machine sewing part of the minecraft face mats. Work in progress – mats at various stages of completion. Machine sewing finally done! Of course, that means the bad news is I’m up to the hand-sewing part.  Which is the slow and difficult bit (well, it is if you’re…

Not much I can add to that, really. Except think of me at 10 am tomorrow (NZST).  And keep your fingers crossed that Cyclone Cook (yep, another one!) diverts back out to sea before this rain gets any worse…