One of the fun bits about quilting is once you’ve got your main pieces made, and have a million possible ways to put them together into bigger blocks.  I started playing around with a few options for the Three Dudes block this morning, and there were so many possibilities!
I was tempted by this pinwheel arrangement at first: 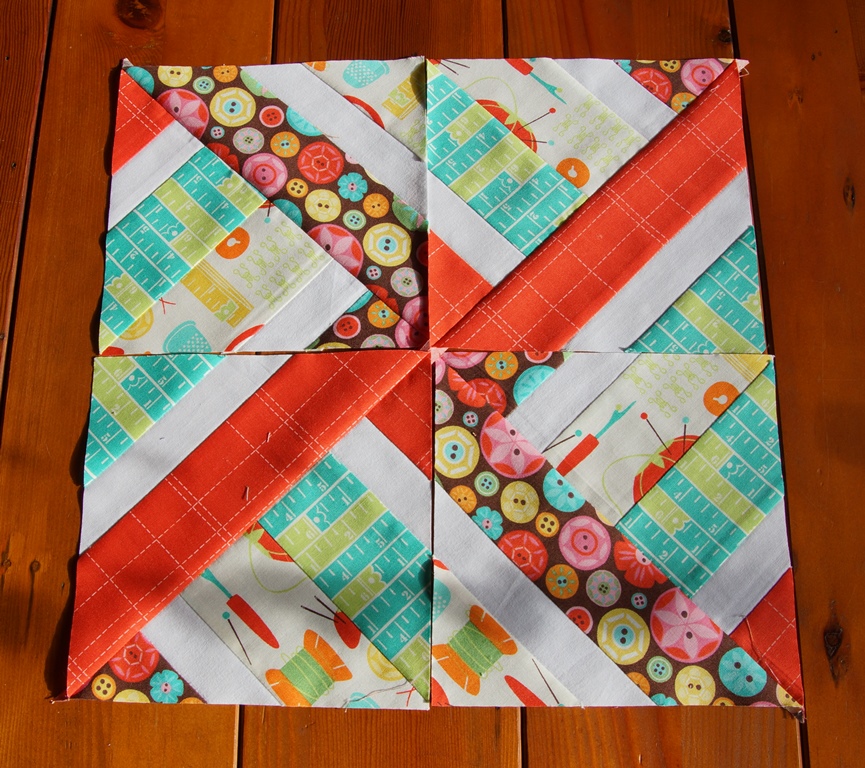 It looks really cool on its own, but then when I tried putting it together with a few more blocks, it wasn’t as interesting, because it didn’t make any of the cool secondary blocks that is the whole point of the Three Dudes block. 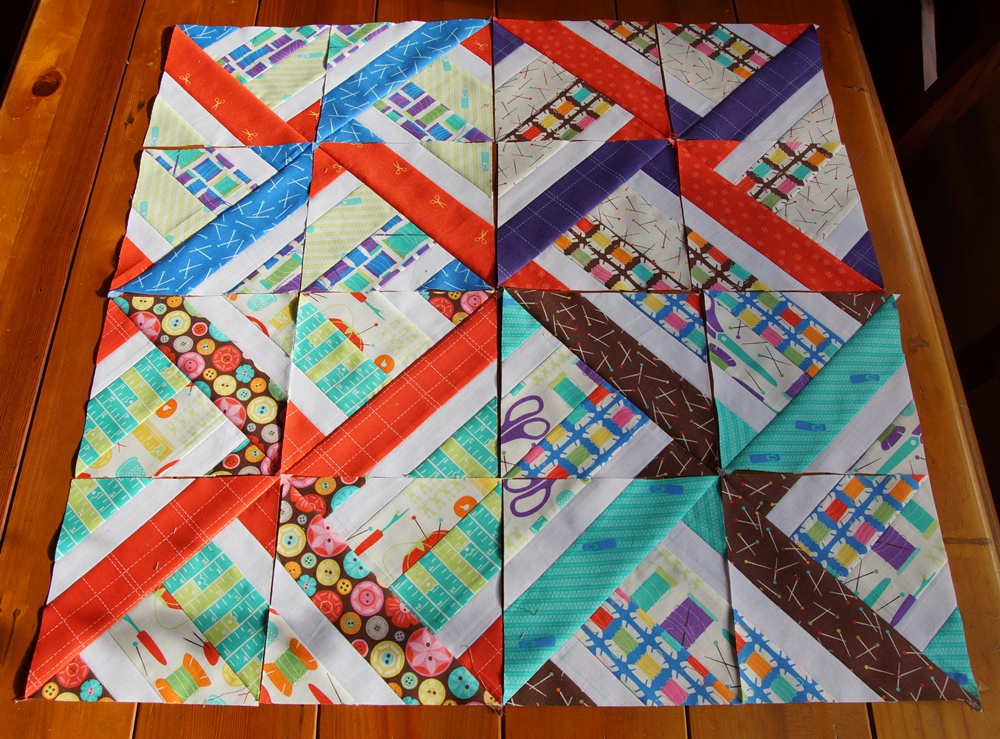 Plus, I realised I’d made a crucial error in the previous stage when I was sewing the squares together, and had ended up with some pieces that had the opposite rotation to the rest, which is why the top left-hand corner is weird. You can see the problem if you look at the “tick” shapes in the photo below – one ticks to the left, and the other to the right. So a layout based on rotational symmetry wasn’t going to work. 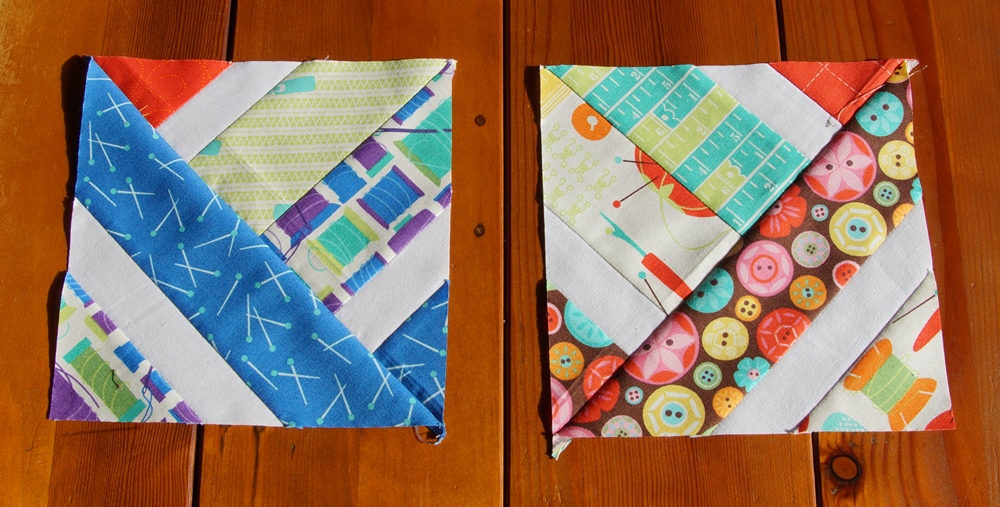 So I went back to the layout I’d originally planned on using (which doesn’t show up the wrongly-rotated blocks so badly). Or rather, three different layouts that produce the same overall pattern, but centre a different part of the pattern, so change the overall look of the quilt because of the ways the colours change between blocks.
Option 1: 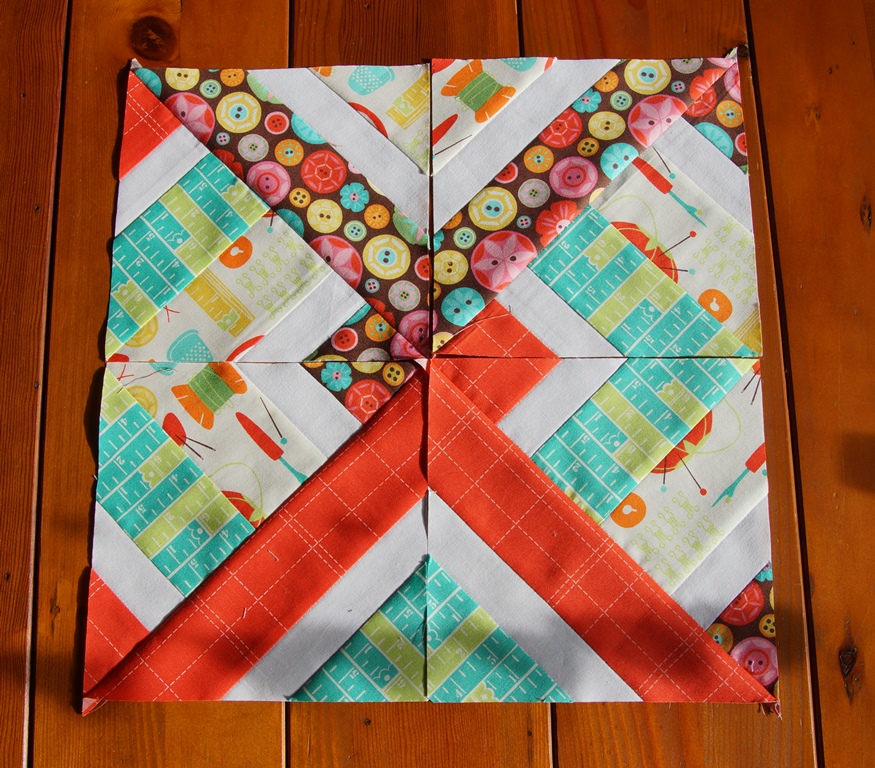 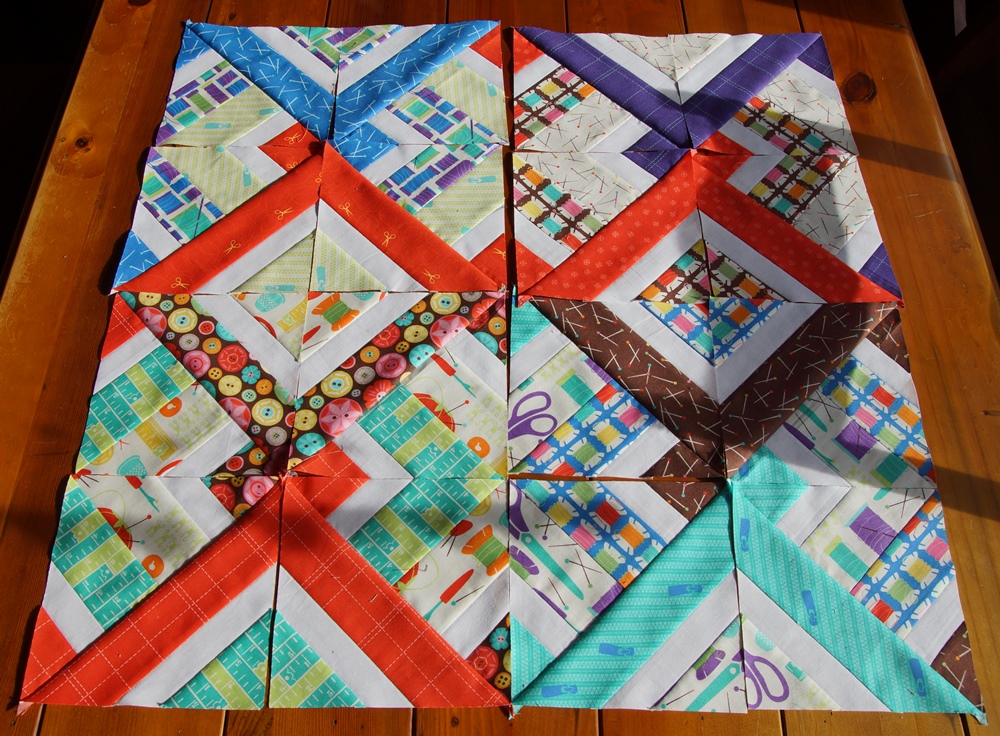 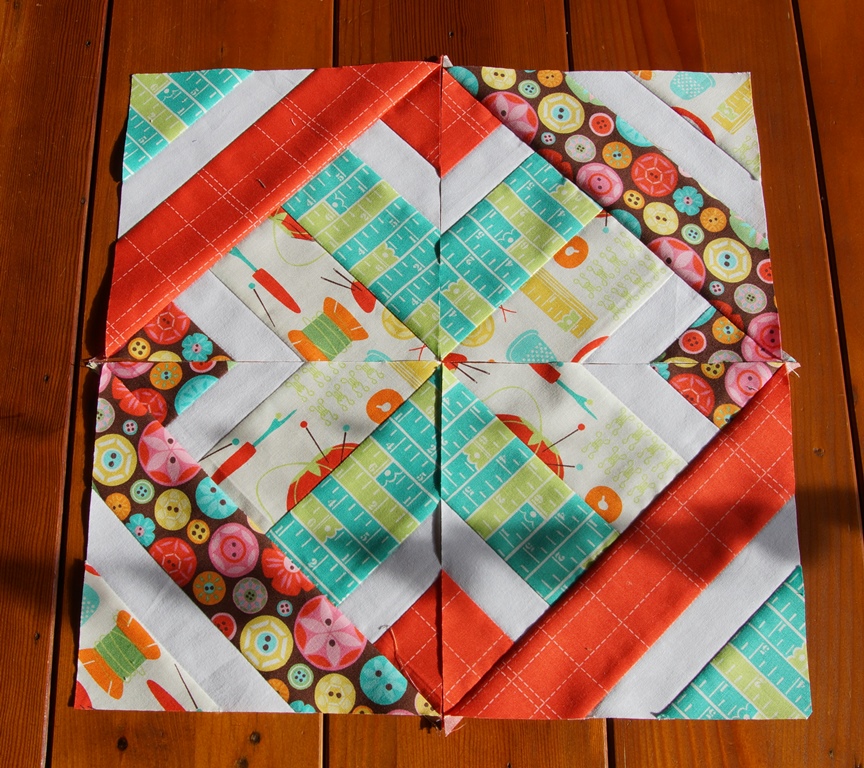 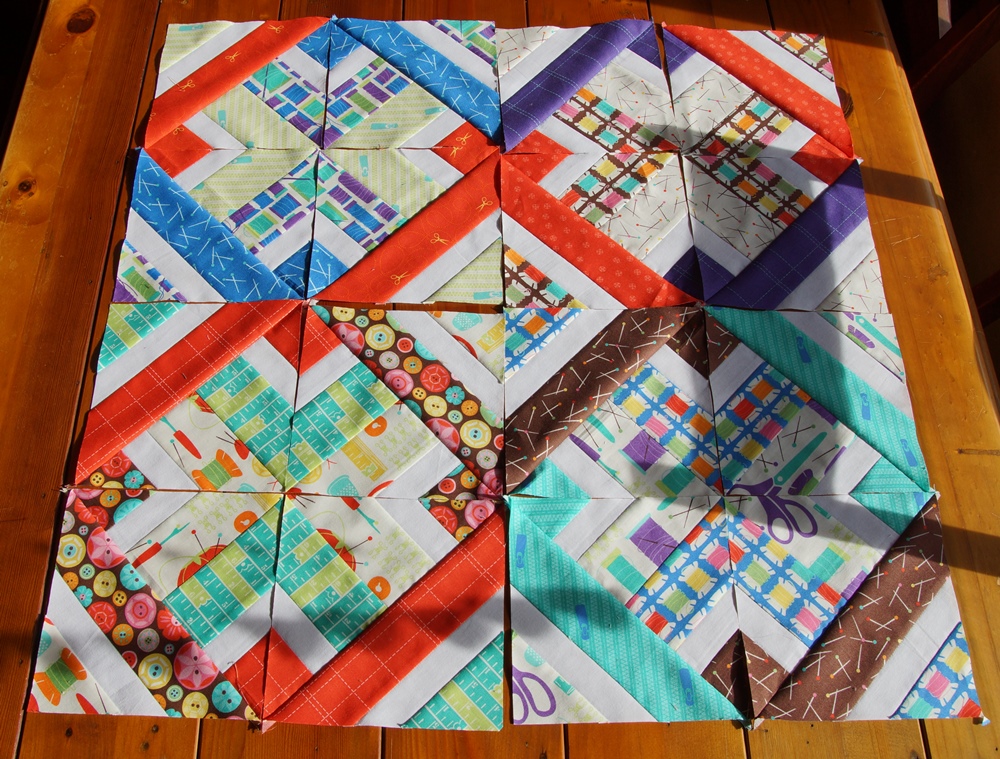 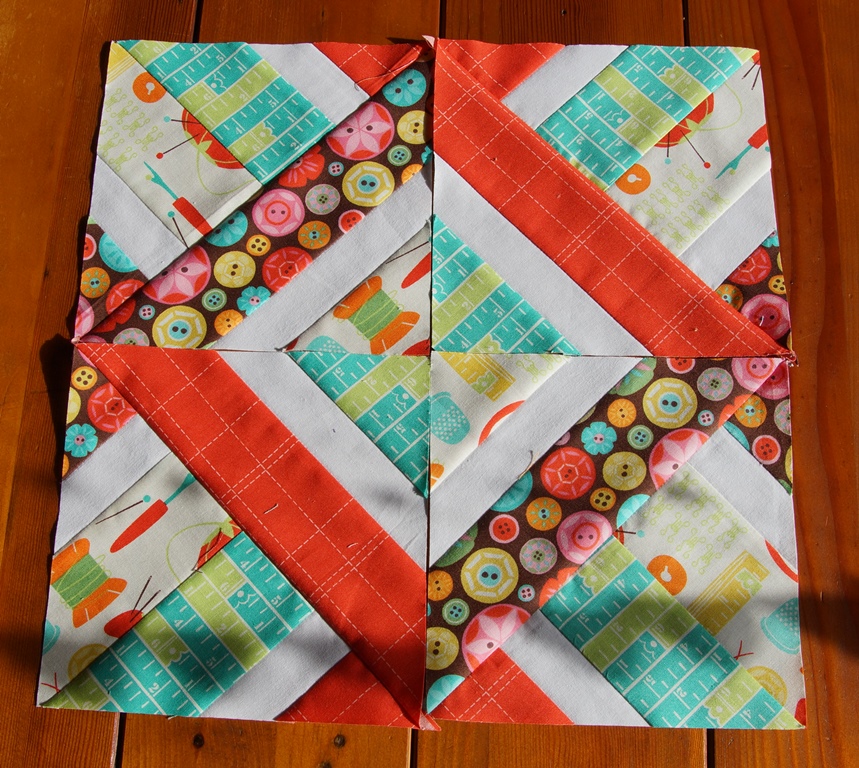 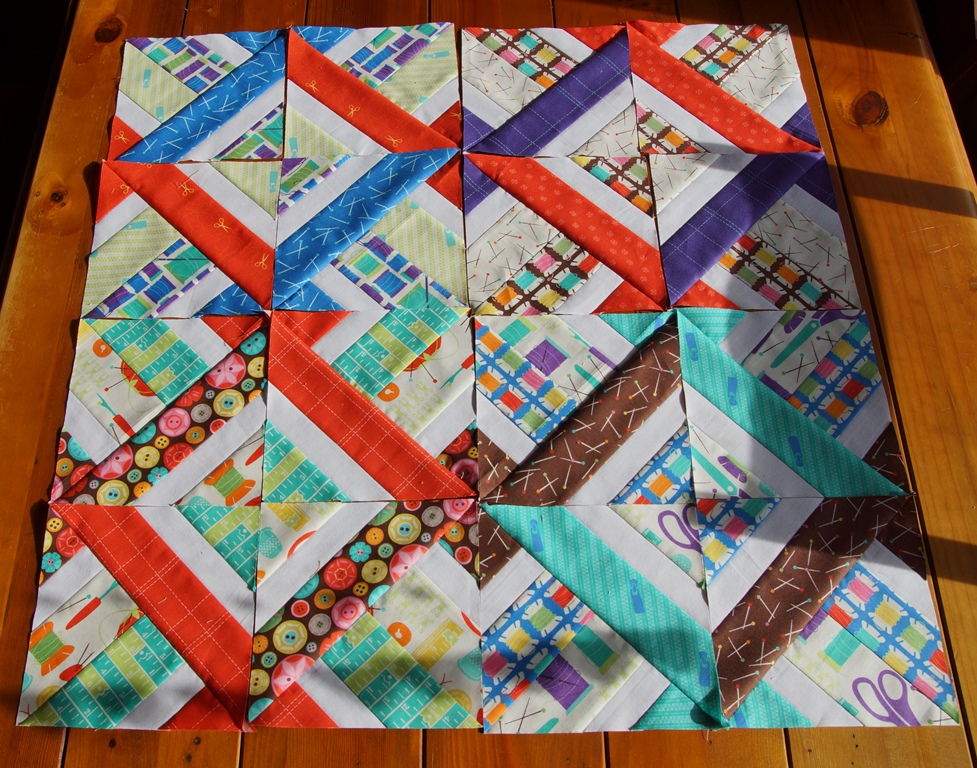 At the moment I’m wavering between option 2 and option 3.  Probably option 2.  Possibly.  Maybe.  Too many options!!!

Speaking of too many options, I roped Harvestbird into a shopping expedition this morning, to help me find an outfit to wear to graduation.  For a shopping expedition that started out as “I have no idea what I’m looking for, but here is a very long list of things I absolutely do not want”, it went remarkably well, and, after visiting every shop in Hornby Mall, plus most of the ones in Dressmart,  I ended up with an outfit that is simple enough not to set off all my “arggh, I hate getting dressed up fancy” alarms, but still dressy enough to look like I did actually make an effort.  I even found shoes I liked!  (Spoiler warning, they have sparkles 🙂 )
Our only failure was to find an 80s-style brocade waistcoat, but as that potential addition to the outfit was mainly inspired by me commenting that obviously my aspirational style icon is Duckie from Pretty in Pink :-), after discovering that that aspect of retro 80s style hasn’t yet come back into fashion (at least, not in the shops we visited), and a trawl through the big second-hand place in Hornby failed to turn anything up, I decided it wasn’t essential.  So we gave up the search and instead rewarded our shopping diligence with cake and yum cha.  Which is how all shopping expeditions should conclude.
Photographic evidence of the shopping success will have to wait until graduation, when I’m sure many photos will be taken.

hich means I can finally reveal the secret project I mentioned ages ago. In fact, it was two secret projects.  Or possibly just two iterations of the same secret project.  When browsing the internets looking for patterns to feed my new paper-piecing obsession, I came across a lovely chicken pattern that was just crying out…

I’ve always suspected being social is a dangerous thing.  I proved it on Tuesday night, when, waving to my neighbour as we always do when I happen to arrive home while she’s in her front yard, I thought I’d actually stop and say hello for a change.  As I was talking to her, I leant…

Today was the sixth anniversary of the 22 February earthquake.  The big event for the day was the unveiling of the new memorial wall, much discussed and debated over the last few years.  We needed a blog post for CEISMIC, so I offered to go to the ceremony and write up my impressions.  I won’t…

nother Christmas function today (almost the last one for the year) – this one for the College of Arts office staff, which they invited our office to, seeing as they share a corridor with us.  As well as a pot-luck lunch, the big event was the announcing of the winners of the Christmas door decorations…