own to the last few days of work before the Christmas break, and I’m seriously feeling in need of a holiday. What with boss still being away on parental leave, and several big deadlines falling in December, work hasn’t had the usual end-of-year wind-down this year – we’ve just been in full-on busy mode trying to get everything done. Oh well, only three more days until the university shuts down for Christmas, and then I get a couple of weeks off.
And at least there’s been plenty of distraction in the form of many many Christmas parties (one of the perils of working in a large organisation, especially when you’re connected with multiple departments), including two I hosted myself this weekend. First was the CEISMIC team party on Friday night (which grew a bit larger than expected, because we decided to invite a few students and volunteers who are working in our office over the summer – it was a bit of a squeeze fitting everyone into my little lounge, but luckily students are happy to sit on the floor :-)), then on Saturday night what was technically the Bookcrossing Christmas Party, although in reality it has evolved over the years into mostly just I invite a few friends round, whether bookcrossers or not (though I still also open the invitation up to bookcrossing meetup regulars).
Both parties went very well, despite nearly running out of cutlery on Friday night (note for next year: actually count up how many people have been invited before agreeing when someone says, “We really should invite X too”), and failing to provide vegetarian food for the Harvestbirds on Saturday (dinner was pot luck, and in a bid not to over-cater as I usually end up doing, I decided I’d only make nibbles and a dessert, and trust to luck for the mains – which worked to the extent that we ended up with the right *amount* of food, it was just that it was all meat-based. Oops – probably should have been a bit more organised and actually told people what to bring. Of course, they were very gracious about it though, and just filled up on the bread and dips).
Definitely the least stressful party organising I’ve done in ages – I’ve been so busy I didn’t have time to go over the top in preparation, so it was just a matter of making sure the house was clean and doing the minimum possible food preparation (ok, so I did make bread both days, but that’s easy – most of it is just sitting around waiting for the yeast to do its magic), then deciding that anything that wasn’t done obviously wasn’t important 🙂 Having the two parties back to back like that helped too, because most of the preparation I’d done for the first party carried over to the next night – all I needed to do was a quick vacuuming of crumbs from the lounge and whip up another batch of bread, and I was ready to go. I even managed to recycle some of the leftover food 🙂
Which meant that I had time on Saturday to go to the Art Gallery opening! The Christchurch Art Gallery has been closed since February 2011 – at first because they were using it as the Civil Defence headquarters while they were still doing search and rescue after the earthquakes, and then because they discovered damage to the building that needed to be brought back up to code before any other galleries or museums would lend them any exhibitions. So it’s been a long time since we’ve had an art gallery, but they finally re-opened to the public on Saturday morning. Harvestbird and I managed to get there in time to be in the queue to be first through the doors, and it was a very exciting moment. There were no speeches or anything, just lots of happy staff with huge smiles to finally be able to welcome visitors back into their gallery, and lots of happy people pleased to be back.
Like so many things in post-earthquake Christchurch, it’s hard to describe just how amazing it felt to go back into the Art Gallery after all this time. It’s like another little piece of normality being restored to our still-broken city, and oh so exciting. From the looks on the faces around us, everyone was feeling the same way. So many smiling faces (and the odd tear), so many people rushing up to an old favourite exclaiming, “Oh, I remember this one!” We spent so long just drinking in the first couple of rooms that we weren’t able to get around the whole gallery (the guides giving tours were having the same problem – we joined a tour, and about half way round the guide suddenly realised she’d been so enthusiastically telling us everything about everything that she was way behind schedule, so had to race us round the rest of the tour). I had to keep telling myself that this wasn’t my only chance to see the gallery, that I would be able to go back many times and see the rest – they’re not going to suddenly close it down again! I think we’re a little *too* used to impermanence in this city now…
After all that socialising, I had a nice quiet day yesterday, and managed to finish binding all my Christmas quilt projects: 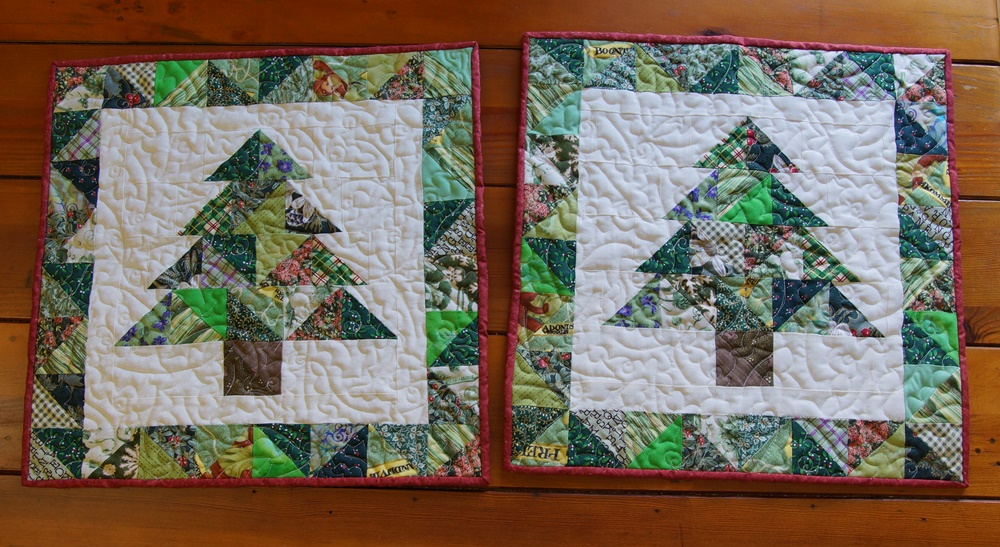 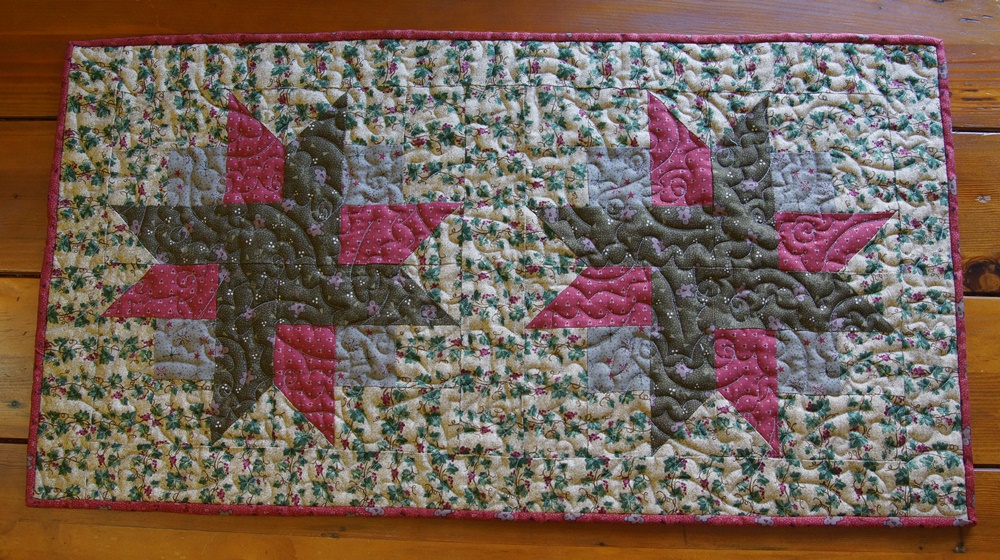 I feel quite productive looking at the finished pile! 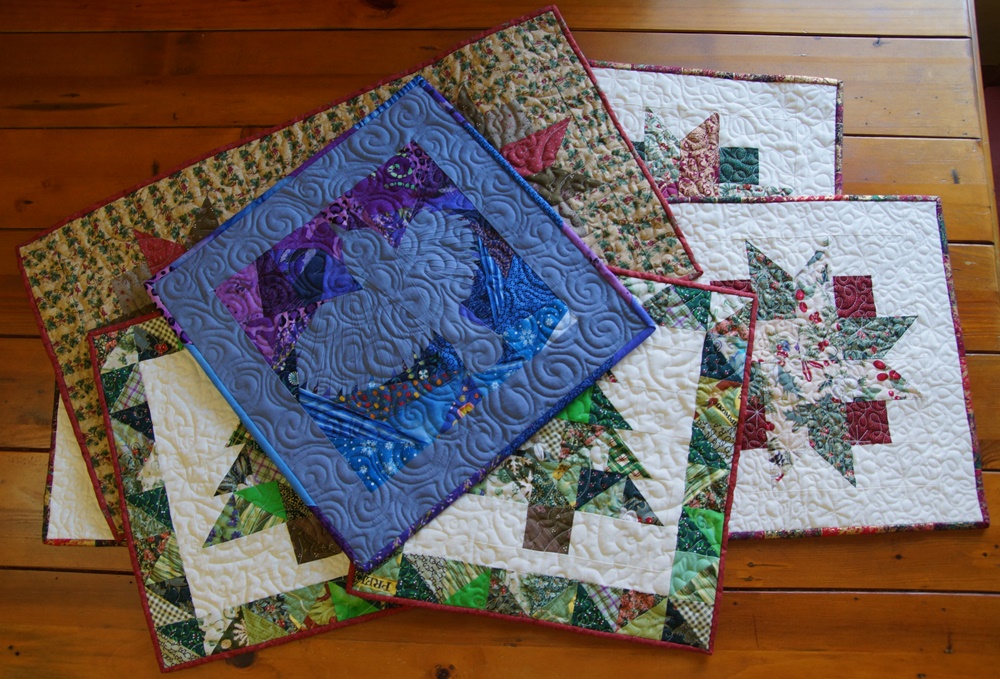 EISMIC has been shortlisted for the NZ Open Source Awards, so we’ve been invited to the awards dinner in Wellington.  None of the bosses are available to go, so today they asked if I’d like to go in their place, and take one of the team with me.  So I get to go to a fancy…

I just spent mumble mumble mumble dollars on a shiny new toy: Those of you who know how much my little point & click camera has annoyed me over the years may be surprised to see the Sony label on the front of that beast, and indeed, that’s not the camera I went into the…

seem to have drastically expanded my social circles all of a sudden, joining two new groups in the space of just a couple of weeks. For a start, I’m now officially a Christchurch Blogger.  I’m even on their list of blogs!  And there’s like an official-type button I’m supposed to put on my diary somewhere…

I finished my crocheted dishcloth!  It actually went pretty quickly once I got the hang of it.  Now that I know what I’m doing, I might have to go and buy some more wool (or cotton, or cotton wool… you know what I mean) so I can make another one to have as a spare….