I made a start on quilting the eye-spy quilt yesterday.  I didn’t get very far, unfortunately, because after about half an hour I suddenly seemed to have lost all my carefully practised skill at controlling the speed.  Now, no matter how gently I pressed on the foot pedal, I could only produce either dead stop or top speed.  And as successful free-motion quilting is dependent on matching the speed of the machine to the speed you’re moving the fabric, this was not a good thing.  After several more attempts to get it right, combined with a lot of fiddling with the primitive speed limiter on the pedal (basically just a screw on the underside that you tighten or loosen to determine the maximum speed, which didn’t seem to be making any difference either), I finally realised it wasn’t me but The Beast that had the problem.
I did a bit of Googling and diagnosed the poor thing with an extreme case of broken capacitor.  Which means I’m going to have to take it in to a sewing machine repair place and hope they carry such obscure parts as a capacitor for a 30-ish year old machine.  I suspect they may laugh.  Probably followed by offering to sell me an entirely new foot pedal for many many dollars (according to Google, such things are available for a not too exorbitant cost, as long as you live in America and (a) don’t have to pay the shipping, and (b) have the same voltage and plug shapes and stuff as America, which NZ doesn’t.  I couldn’t find any prices for the NZ equivalent, but going by the cost of everything else sewing-machine-related here, it won’t be cheap).  Plus the only shop I know of in Christchurch which repairs Berninas is way down Colombo Street somewhere, so several buses away, and I have a distinct lack of free weekends to make the trek in over the next few weeks.  Oh well, the lack of free weekends means I won’t have any time to do any sewing anyway, so I suppose it can wait.
The bits I quilted before everything went horribly wrong look very pretty though (I have discovered the joys of variegated thread.  This may become an obsession.).  The effect I was going for was that of vines climbing around the window frames, and apart from a few hiccoughs, I’m pretty pleased with how it was turning out: 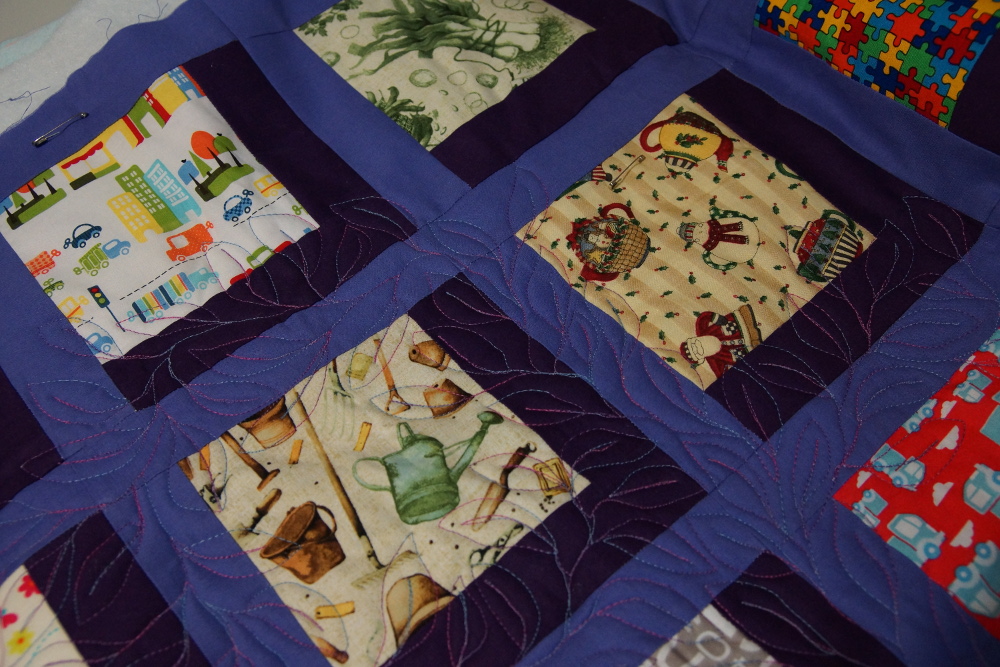 You know how I said these birds are getting harder? Totally worth it.  The individual feathers on its wings look so cool!  I think this one’s my favourite yet.

(Very late (blame the Flickr debacle) and I know I’m way behind on blog posts (and vlogs), but I’ll get there eventually – life has been busy!) Projects completed in 2018: January I made a lot of progress on projects, but didn’t actually finish any of them. February Lego Quilt March Birds in Flight quilt…

Didn’t manage to get it done in the promised under an hour (it was actually closer to two), but I did get it done. Most of that time was taken sewing the first very long seam (when you fold the super-long strip in half and sew down the entire length), and in untangling the knots…