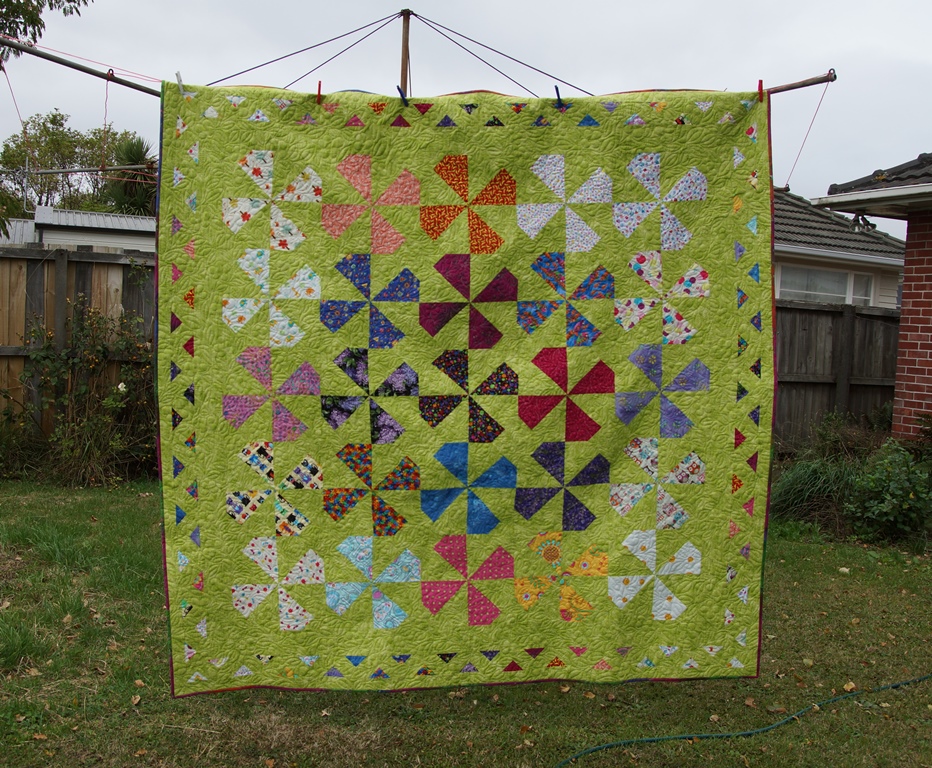 I finished off the binding on Monday night, but pretty much every evening this week that I’ve been home before dark it’s been too wet to hang the quilt on the line so I could photograph it (and I really wanted to take the photo outside in natural light). It’s supposed to rain again this morning, but while it’s daylight and the rain is still holding off, I dashed out for a quick photo.
I’m pretty pleased with how this quilt turned out, considering it was just supposed to be a practice run at making a really big quilt (it’s big enough to use on my queen-size bed (which I actually did on Monday night, when we had a sudden cold snap, and I couldn’t be bothered swapping out my summer-weight duvet for the winter one, so I just threw the just-finished quilt over the top for a bit of extra warmth), though, because it’s square, not quite long enough to go over the pillows).  The quilting isn’t perfect (and there’s quite a few wrinkles on the back, because of my struggles to find somewhere to lay it out flat to baste it – I’ve since found instructions for a better way to baste big quilts using a table, so I might try that next time), but the overall effect is pretty good, so I’m happy enough with it (and even happier that the things I learnt will mean I do a better job next time, which was the whole point of making a practice quilt).
What I’m most proud of is the border.  The main design of the quilt came out of some experimenting I was doing with snowballing pinwheels.  The block that emerged was (to me) reminiscent of a flower, so I decided to make a “Flower Garden” quilt, with a field of flowers on a green background.  As I was making the blocks, I decided the off-cuts from the snowballing were too interesting to throw away, so I played round with them and came up with the zig-zaggy triangles border pattern, which is my favourite part of the whole quilt (though I also quite like the negative space between the flowers – I might have to experiment with that a bit more in another quilt…)
So there you have it: my first ever designed-it-entirely-myself-totally-from-scratch quilt.  And my first finished big quilt.

or those of you with super-fancy robotic sewing machines with computer screens and a million functions, my new sewing machine is going to look positively antique. But I’m very excited by it – it’s so much more advanced than my old one, and will let me do so many exciting things.  On the downside, it…

This block is called a LeMoyne Star.  Well, sort of.  A proper LeMoyne Star uses a horribly complicated sounding technique called Y-seams, which I might try mastering one day, but not today.  So this is a cheat’s version, that (apart from the seams running through the diamonds) ends up looking exactly the same as a…

It is miserably cold.  Snow and sleet this morning (but not enough to settle, so no chance of getting the day off work 🙁 ), and an icy cold wind.  Now it’s just raining and cold and horrible.  We’re all sitting here in the office (yes, I’m being naughty and writing this at work, but…

In the wake of the last few patchworky/quilty projects I’ve been working on, I’ve accumulated quite a stash of fabric scraps that are too small to really be useful, but too big to throw away, so I’ve just been collecting them all together in a “might come in handy one day” pile. Anyway, now that…