The last couple of weeks have been very long ones, full of drama and a total emotional roller-coaster.  But perseverance paid off, and on Wednesday, 6 months and 2 days after H left, he signed the separation agreement, and I am finally completely legally and financially free of him.
It’s cost me a lot, both in stress and financially (ironically, property law that was originally set up to protect women worked against me, because despite the fact that I’ve been pretty much the sole income earner for the last decade (in his best year his business earnt less than 5% of my salary), he was still entitled to half of everything.  I can tell you, it irked enormously to have to take out a huge mortgage to re-purchase the house that I’d already worked hard to pay for! And don’t get me started on the whole “no fault” thing! (apologies to those of you who have already heard me rant at great length and multiple times about the evils of the Matrimonial Property Act over the last few months – promise I’ll shut up now)), not helped by his conviction that I was out to cheat him so disputing every tiny detail all the way through the process, adding ever more to the delays and lawyers’ bills.
But in a way, I’m actually glad it got so nasty.  It means that when it was finally all over and the papers were signed, all I felt was joy at having removed such toxicity from my life.  There can be no regrets for the loss of a relationship when you’ve spent half a year seeing only the worst of someone.  So now I can truly get on with my life.  I intend to enjoy every minute of it!

It wasn’t all drama over the last couple of weeks though – I managed to do some fun stuff as well.  It’s Film Festival time, and I’ve managed to get along to a few interesting films.  First, last Friday, was Omar, a Palestinian film which I really enjoyed (although perhaps “enjoyed” is not quite the word for such fraught subject matter).  Harvestbird, who I saw it with, has written a much more coherent review than I could ever manage, so I’ll leave you to read hers rather than attempt my own.
Then last weekend I went and saw a selection of NZ short films.  As is usual, some were fantastic, some just mediocre, and some outright weird.  At least one had me on the verge of tears, and a couple made me smile uncontrollably.  The one that really stuck in my mind was “I’m Going to Mum’s”, the story of a marriage break-up told via the clothing worn by a small boy being shuttled back and forth between his parents (yeah, sounds weird, but in the film it makes total sense).  That one definitely made me smile, it was so beautifully done, and nearly made me cry too.  Actually, I’ve just realised there was a bit of a clothing theme to my favourites – another that made me smile was “Friday Tigers/Ngā Taika o te Rāmere”, which featured a mother and her child dressing up in costumes (with a different theme for each day – hence Friday Tigers) for the train ride to her kohanga reo (kindergarten).
And on Friday Harvestbird and I went to see Computer Chess, a very strange semi-mockumentary about the early chess-playing computers of the late 70s/early 80s, and the people who built them.  I thought it was just the couple of glasses of wine I’d had beforehand at Friday night drinks at work that confused me about a few aspects of the story, but talking to Harvestbird yesterday, she was just as confused.  After much discussion we still couldn’t decide what exactly was going on at a couple of points, but were agreed it was definitely weird.

Mum was up for a few days this week, so I booked us in to a class at the Make Cafe.  The aim of the class was to make a pot-holder, but really it was to teach the basic techniques for finishing off a quilt (which is really just a really big potholder, from a sewing point of view ;-)).  I was quite pleased with my finished product: 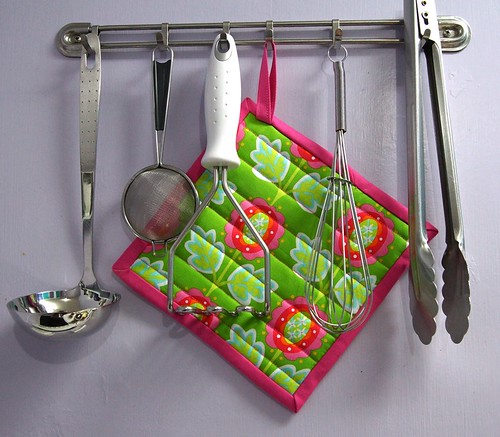 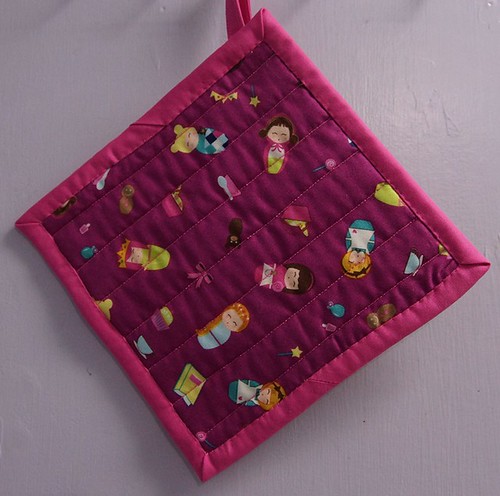 My hand-sewing isn’t the best (so much for “blind” stitch!), but it never is.  It’s lovely and colourful and brightens up my kitchen though, and I learnt a huge amount from the class.

Yesterday Harvestbird and I (accompanied by one of the junior Harvestbirds) hit the shops for a long-planned expedition to replace some of the furniture I had to give up in the settlement (now that my frozen bank accounts are finally unfrozen and I can at last access the inheritance money from my stepfather, which my lawyer thankfully managed to protect for me).  We didn’t manage to find everything I wanted, but we found a few really good pieces at very reasonable prices (and drooled over a few totally impractical but oh-so-tempting pieces), so I’ll soon have the house looking good again.  I’m not getting them delivered until next weekend, but I promise photos once I do.

spent today at a conference. Well, technically it was an unconference – a THATCamp to be precise, a Digital Humanities event (THAT stands for “Technology And The Humanities”) which is a semi-planned, mostly make it up as you go along, mix of planned and impromptu sessions based around the idea that everyone has something to…

ow, time has sped by again, and it’s already two weeks since my operation (and already September, and spring!).  I did mean to come back and write something more substantial than my brief post-op note of stillalivitude, but for the first week or so sitting at the computer was painful and not conducive to writing…

A dried thyme leaf A sultana Salt Cat fur A broccoli floret Bread crumb Hundreds and thousands I think between here, livejournal and flickr, the only ones that nobody managed to figure out where the bread and the thyme.  Well done 🙂

After such a long time without blogging, I seem to have forgotten how to just sit down and start writing. So to ease myself back in gently, a photo-heavy post (which of course takes much more work than just typing stuff, so I’m not sure why I think this is easier…) Anyway, this is going…

Just finished writing a blog post for our CEISMIC blog about the Nepal earthquake, so rather than re-cover the same ground here, I’ll just post a link.