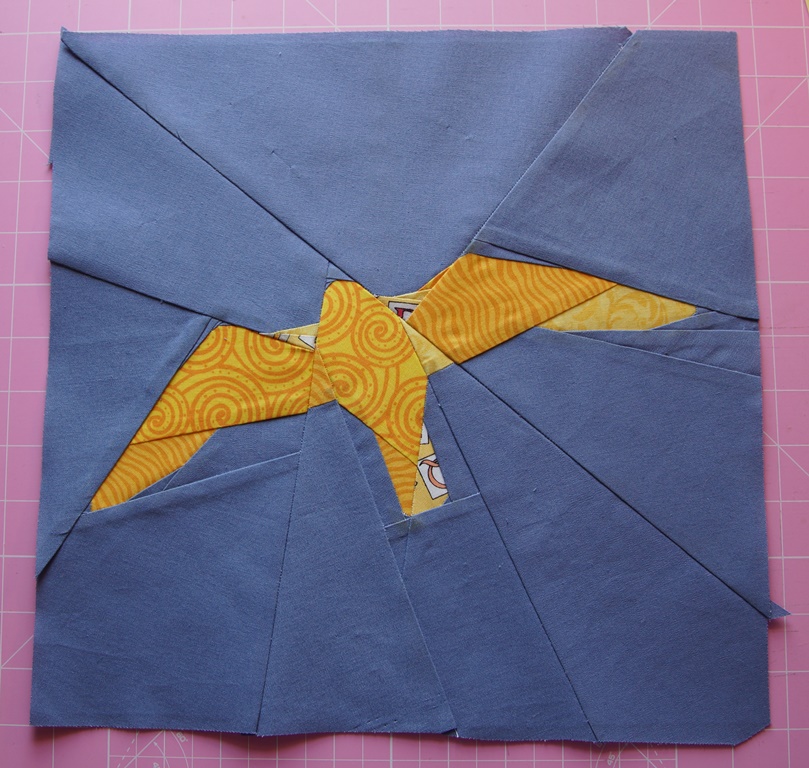 The latest bird in flight, a peregrine falcon.  Which puts me way ahead of where I should be in the quilt-along, but the more I can get done now while life is relatively quiet, the less pressure I’ll have towards the end to get it finished.
I’m not entirely happy with my work on this one – I couldn’t get the wings to line up properly, and the whole thing just looks a bit rough.  Hopefully the faults won’t be so noticeable once it’s quilted, though…

Went to Harvestbird’s surprise(-ish*) birthday party yesterday.  Lots of interesting people (sample conversational topics: how to raise chickens without annoying your neighbours; the cultural assumptions of video games; the medical issues of elderly Norwich terriers; Amy Pond’s pregnancy as a manifestation of the objectification of women; and whether it would be possible to write an app to help find your favourite songs on You Tube), good music (the soundtrack consisted of two songs from every year of Harvestbird’s life, which prompted much guessing from everyone as to which year each song was released), and good food (well, mostly – I don’t think I’ll ever warm to the concept of vegetarian sausages, but the curries were fantastic).  And there was cake and icecream, so the birthdayness was complete (much to the relief of the elder mini-Harvestbird, who’d spent the entire afternoon announcing at regular intervals that it was birthday cake time now, and being told by the adults that, no, she had to wait a bit longer).  A most enjoyable afternoon and evening.
*Mr Harvestbird had decided to throw a surprise party after Harvestbird had said she wasn’t going to bother celebrating her birthday (but, because he’s a nice person, not a jumping out and shouting type of surprise party, which would not at all be Harvestbird’s sort of thing – his plan was to tell her about it the morning of the party so she’d be able to get ready), but a few days ago she told him she was regretting her decision and maybe she should have a party after all, so he let her know he’d already planned something.

It’s been miserable weather here (across the whole country actually – there’s been floods all over the place), and I’ve got a cold, and I’m totally over winter.  But today the sun came out, and I spotted a tiny patch of violets (I think?  Are they still violets if they’re white and not actually violet?)…

‘m possibly breaking the law by posting this picture, while there’s still half an hour to go until the polls close, but I think I’m allowed to as long as I don’t include the name of the candidate or say the words “party vote…” in conjunction with it (so clean out your brains of the…

This weekend was the last of my totally-booked-out weekends of November, and it was the busiest of all (well, apart from the convention weekend, of course).  First, on Saturday, after a quick attempt to clean the house, I went into town to meet up with Harvestbird and family for the Climate March.  There was a…

In a dusty corner of our porch are three large stones, one for each cat buried in our backyard. Our section sits right on top of one of the gravel banks that criss-cross the Canterbury plains, left over from the Waimakariri’s meanderings, and the reason our suburb got off so lightly in the earthquakes. It’s…