I decided to stick with the totally random scrappiness for the next bird, the swift, and I think it looks ok: 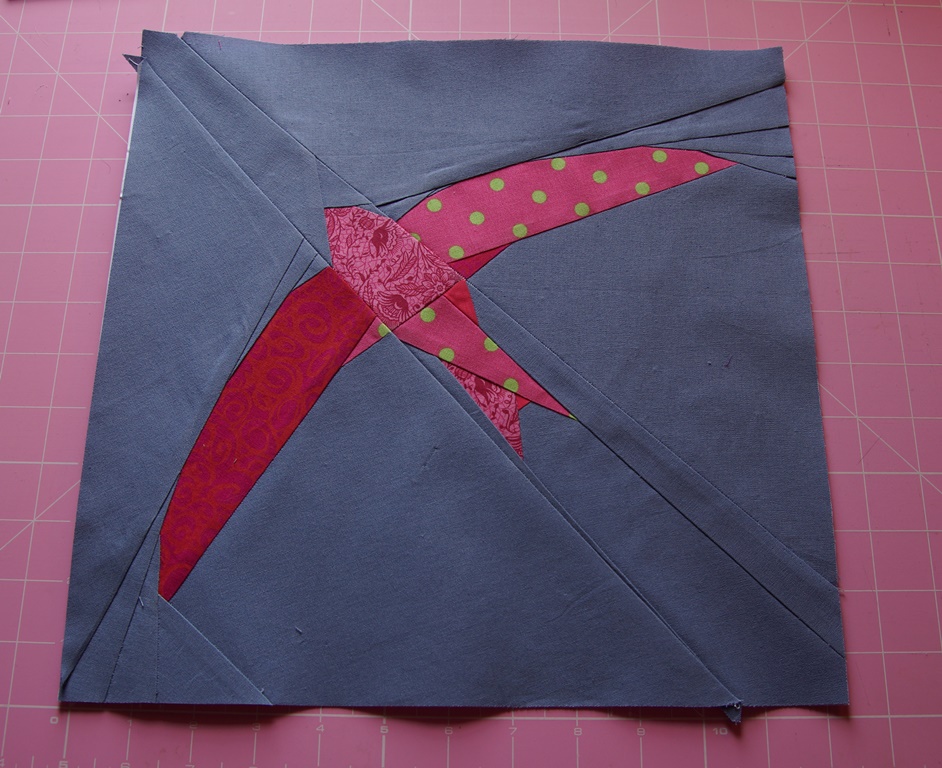 It’s funny, as I was choosing which bundle of fabric to use for it, I found myself reasoning that I should use the bundles with the smallest number of fabrics in them for these simpler birds, and save the ones with lots of different fabrics for the more complicated ones, because I’d need more for them so they didn’t end up with the same fabrics next to each other too often.  And then of course my mathematical brain woke up and reminded me that I was being ridiculous, because the four colour theorem says that any two dimensional pattern can always be coloured in using at most four colours without having two adjacent areas the same colour.  So as long as I’ve got four different fabrics in each bundle (which I do for all but the one I used to make the swan block, which only had three fabrics) then I’ve definitely got enough for even the most complicated pattern.
Of course, it does still make some sense to reserve the big bundles for the really complex birds, because having more pieces will make using lots of different fabrics look better (because I won’t have to resort to just using a single piece of a particular fabric), but in theory at least it doesn’t matter.
I’m sorry, I can’t help being a geek.  This kind of stuff just leaps into my brain unasked.

My plan to use spare half hours to sew failed the moment the really cold weather set in, because I’d forgotten just how cold the study can get in winter (for some reason to do with the way the hallway bends just before the door to the study, the warmth from the fire, which happily…

hile I was in the midst of studying, every time I got invited to do anything my response would be “I’ll be free in November” – with the result that my social calendar is full to overflowing this month.  Last weekend was the Auckland Uncon, of course (which I promise to write a proper blog…

ctually, it’s suprisingly unpainful – except of course at those moments when I bump it against something, which happens every time I forget that I’ve got a giant sausage of bandage on my finger, making it twice the size it normally is and therefore needs a lot more clearance room than normal…  I am discovering,…

Yep, looks much better with decent lighting: It’s not complete though – there’s some stuff I want to add to it yet. Parsnips obviously thinks that what’s missing is a cat: