our spools of thread gone on the Birds in Flight quilt (and they’re 500m spools, so that means there’s 2 km of quilting in this quilt already!), and still a few areas haven’t been quilted.  I thought four spools would be total overkill, but I ended up quilting pretty densely, which uses up a lot of thread (and takes forever – next quilt I’m doing with a really loose quilting design!).  So I’ve run out of thread, and finishing off the quilting on it will have to wait until I can go and buy some more of that colour thread. 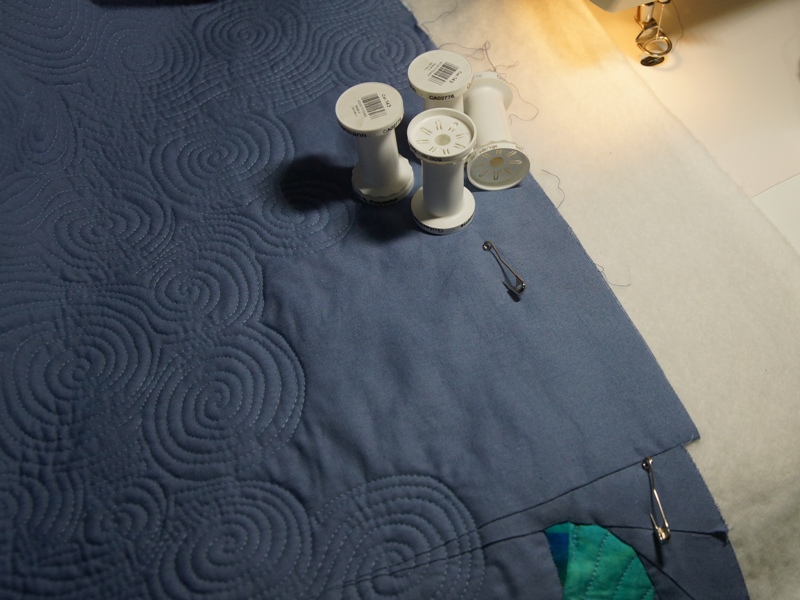 Hopefully it’ll be worth it once it’s finished though. It’s hard to get a real idea of what it’s going to be like when it’s all piled up on the machine and you can’t see the full effect, but I think it’s going to look really cool.

Talking of four, there was a wee earthquake last night in the small hours – only a 4.0, but it’s a sign of how long it’s been since we’ve had any decent aftershocks that it actually woke me up fully enough that it took me a while to get back to sleep.  I remember the days when I wouldn’t wake up for anything less than a 5.0 (and no thank you, I really don’t want those days to be back again!!)

Cicada season has begun, which means that (a) sitting out in the garden can get quite deafening, and (b) Parsnips keeps catching them and bringing them inside.  Being woken by a cicada loudly protesting at being pestered by a cat is almost as disturbing as being woken by an earthquake.  They also have a tendency to escape from her and end up in hard to reach places like behind the fridge.  I can report that fridges have absolutely no muffling effect on the sound of a cicada.

Most important thing:  I finished the Lego quilt last weekend, and Lytteltonwitch delivered it to her friend, who apparently loved it.  I was pretty pleased with the finished product too: The invisible thread, even though it was a bit of a pain to work with, worked out really well, giving texture to the blocks without…

lection day is looming, and the campaigning is hotting up. I had five pieces of mail in my letterbox when I got home this evening, and they’re all from political parties. Most went straight in the recycling bin as junk mail, but one I’m considering – a letter from James Dann, the local Labour candidate,…

um arrived last night for a week’s visit (I’ve only been inviting her to come up to Christchurch for about a year…).  I’ve got to be at work for most of the week (though I did manage to book a couple of days off), so I think we’ll both survive the visit with sanity intact…

ecember weather is notoriously changeable in Christchurch, but it’s been outdoing itself this year – the temperature has been going from high 20s to just above freezing and back again in the space of a few days, and yesterday we had two huge storms, with thunder and hail and all sorts of drama. The first…