DD has been down again, or at least, the ability for some of us to log in properly has been, so these two entries are ones I wrote over the last couple of days but haven’t been able to post until now (so the “yesterday”s are several days ago now – I’ve added in the dates I wrote them to try and clarify a bit)
Tuesday 17 December:
Our team had our staff Christmas party last night. And I hosted it! Our original plan had been to go out to dinner somewhere, but on Friday we suddenly realised there was really only one week of work to go, and we hadn’t booked anything, and Monday was the only one night that suited everyone, and it was all looking like way too much effort to find somewhere we could get a totally last minute booking for a largish group (by the time we added in partners it was looking like at least 10 of us). So I had a brainwave and suggested we have a pot-luck dinner at my house. Which we did.
It turns out Monday is actually a very good day to host a party, because you’ve got the whole weekend to clean the house and prepare, then when you get home after work on Monday night there’s just a few last-minute things to do and everything’s ready. There was a minor last-minute crisis when I realised I wouldn’t have enough cutlery for everyone (I still keep discovering things I don’t have any more after the great property division of 2013, and a second set of cutlery is one of them), but that was easily solved by asking one of the team to bring some. Technically, I don’t have enough plates either, but who says everyone has to eat off full-sized dinner plates? A combination of big and small plates works perfectly well – the people who get the small plates can just come back for seconds!
Anyway, the evening was a great success – I managed to squeeze enough chairs into the lounge for everyone, there was tonnes of food (in fact, too much – we’re having a shared lunch today to use up the leftovers), nobody minded the mismatched crockery, there was much laughter and fun, and Alex and Jack even stayed on to help me clean up afterwards. And best of all, no stress whatsoever – I’m so enjoying being able to do things like spontaneously invite people round to the house without it needing to be a big deal or matter for negotiation. Life is good!

Last week was quite a social one too – first, on Tuesday, was the Toastmasters Christmas party. We had a table topics session (which is where you’re given a topic and have to give an impromptu speech on it for 2 minutes – which is often very difficult, but lots of fun), then a quiz (my team lost miserably, but we reckoned we were having the most fun) and supper, and finally a secret Santa swap, which was run like the wrapped book swaps I’ve seen at some bookcrossing conventions, where you’re allowed to steal other people’s presents. After a bit of swapping, I ended up with a set of plastic wine glasses, which I’ve donated to the office (after spending many Friday night drinks sessions drinking out of the weirdest collection of vessels, proper wine glasses, even if they are plastic, definitely seem like a necessary addition to our office supplies!).
Then on Wednesday we had a morning tea at work to officially re-open the building (complete with blessing of the building by the university’s chaplain – it’s one of the oddities of NZ that in academia (which, as in the rest of the world, is generally much more liberal and left-wing than the rest of society), you’re actually more likely to encounter religion in official events, because of the way that religion is tied up with M­­āori tikanga. It leads to some rather weird moments – like getting a room full of people singing a hymn, despite probably ¾ of them being atheists, because the hymn’s in M­āori and they want to show respect). Oh well, at least the scones were good!
I took the afternoon off on Thursday so I could go to the official launch of Jan’s pop-up tearoom business. It’s been a year in the making, but she’s done an amazing job with it. She has a little green caravan she can take to venues, then sets up tables under an awning with proper old-fashioned china cups and saucers, and dainty things to nibble on (at the launch it was bowls of strawberries and cream, scones, and little cakes). It sounds like her main income is going to come from catering things like hen parties and baby showers, but she’ll also be able to go to bigger events. I hope it works out well for her – it’s such a great idea, and she’s put so much energy into it. 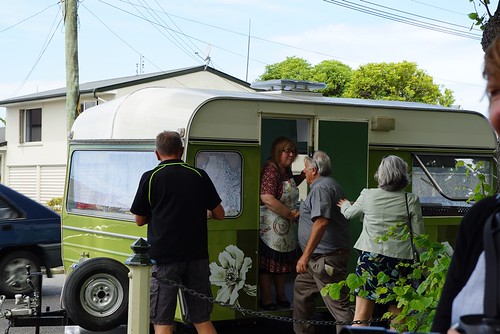 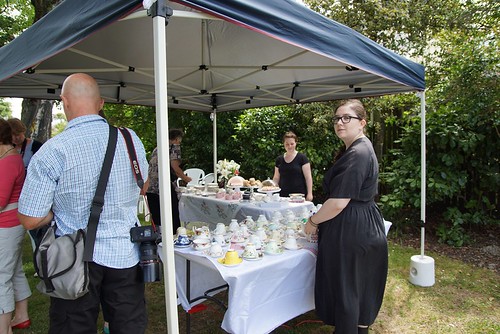 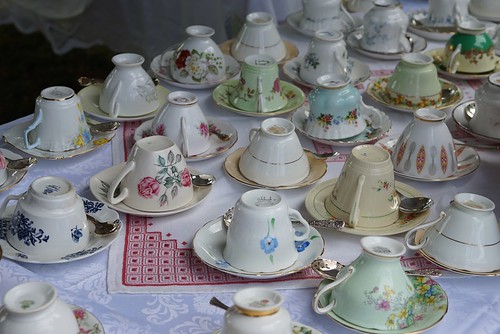 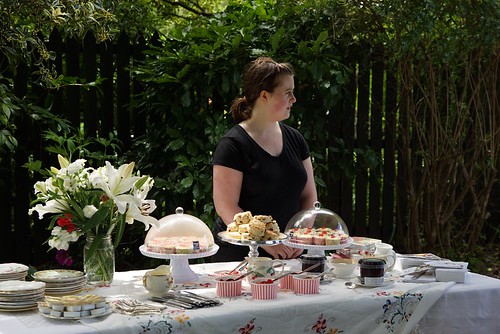 After a most pleasant afternoon sitting in a park with tea and scones and chatting to assorted people, I decided to make the most of the rest of my time off and walked into town (the launch was at Abberley Park, in St Albans, so not too far from the city). It’s been a month or so since I’d been into the city centre, so our ever-changing cityscape had some surprises for me.
A pleasant surprise was to see the trams running again: 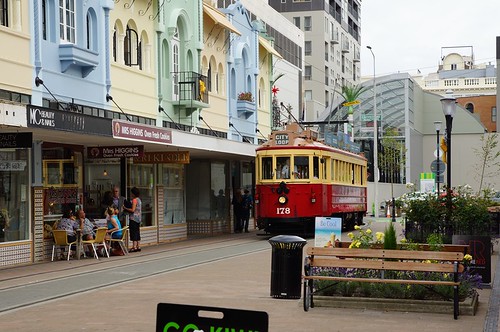 Doesn’t that look like such a wonderfully normal scene? Amazing to see it again after so long.
Of course, most of the city doesn’t look like that. It’s more like this: 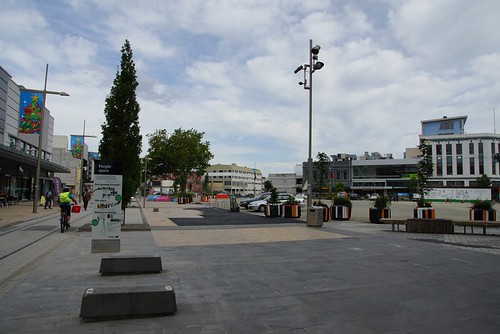 Where those cars are parked is where the Coffee Club that used to house our OBCZ (and where we held the Sunday brunch for the 2009 convention) once stood. For a long time it was the last building standing in the block bordered by Colombo, High and Cashel Streets, but suddenly it’s gone, and there’s nothing but a vast empty space in what used to be one of the busiest shopping areas of the central city. And I suspect some of those buildings in the background will soon be gone too.
That evening, I met up with Harvestbird for a shopping expedition, as we were both desperately in need of summer clothes. It didn’t start in a very promising way, with us doing multiple laps of Farmers despairing at how ugly everything was, vainly retracing our path in the hopes that something better would have suddenly appeared on the racks. But eventually, and after a few stops at other shops, we each managed to find ourselves something both acceptable and cheap (yay for 50% off sales!), so we decided to count that as winning at shopping.
I spent the weekend very productively, finishing off a few Christmas presents (I finally finished the hand sewing on the minecraft face mats!), and baking gingerbread stars to make up wee parcels for various people at work that I need/want to give gifts to. I had fun decorating them – lots of coloured icing and little silver balls (except on the ones for the one vegan on my list – he just gets boring plain white icing made from icing sugar and water, because all the fancy stuff has gelatine in it). 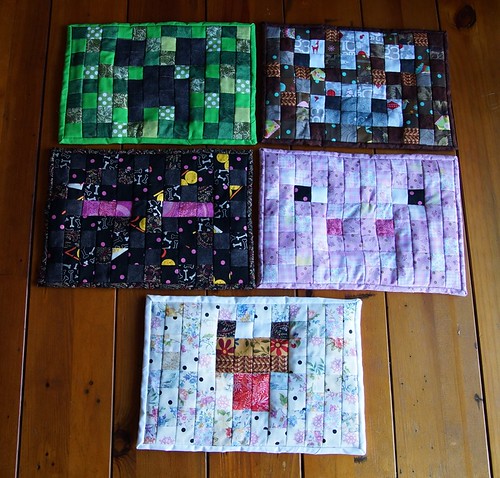 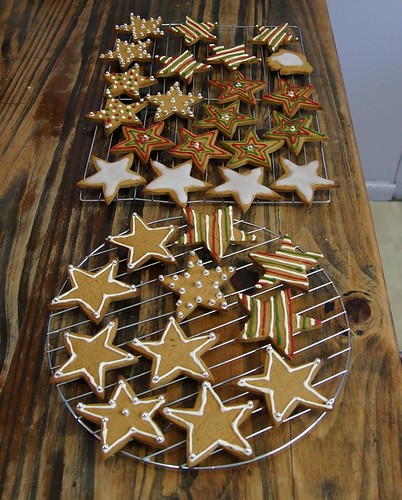 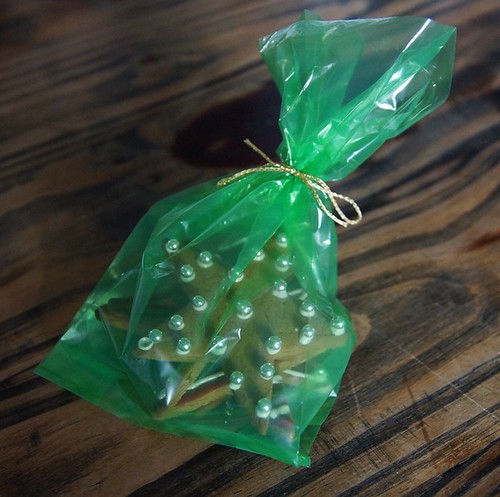 Wednesday 18 December:
Brother gave the kids my Christmas present last night (I’d suggested he give it to them early, so they could make the most of it over the school holidays) – their own personal Minecraft server. Well, at least the rental of one for a year. They’d been asking me for ages to play multiplayer with them, but setting my own computer up as a server was looking way too complicated (plus would have required me having it always on), and I wasn’t comfortable playing with them on any of the public servers (which are filled with idiots and trolls), so I’d vetoed that and said they’d just have to wait until next time I came down to Alexandra to visit when we could play over LAN. But then I discovered I could rent us private server space for a very reasonable cost, which would allow me to set up a private server with a whitelist, so I could control who gets to play on it. And that sounded like a much easier and safer way of letting them play multiplayer. So (after checking Brother and SIL were ok with the idea, of course) I set it all up and sent Brother the IP address, and told him to give it to the kids whenever he thought a good time.
So last night I got a phone call from Brother telling me to log in, because he was about to give the kids the news. Apparently it was received with almost hysterical levels of joy and excitement, and I spent the rest of the night playing Minecraft with them long distance. Lots of fun! I suspect I’m going to have to seriously ration how often I’m available to play with them though – if they had their way I think I’d be logging on as soon as I get home every night. Might have to be “busy” most evenings (though that’s the nice thing about Minecraft – they can carry on playing on their own, and just show me what they’ve built when I do log on). But for the first few nights at least, while it’s still a novelty, I don’t mind wasting a few hours on them 🙂

I finally got round to hanging two cool things on the wall this morning. The first is the Irish pub scene photograph I won at the Dublin convention, which I’ve added to the hallway with the other artworks I’ve brought home from various trips: The other isn’t quite as artistic, but it makes me happy:…

Ok, so my plan for this weekend was to put the binding on my experimental quilt.  But the three new In Flight patterns were tempting me, as was an idea I’d had back when I was making the original birds, of reversing the plain background and scrappy foreground.  I never followed up the idea at…

r rather, it just saved my soul from being saved, which is even better in my book.  As is usual on a Saturday morning, I’ve got on some very loud music while I clean the house – this morning’s choice is Aerosmith.  And I just had a visit from some Jehovah’s Witnesses.  They were starting…

Yep, looks much better with decent lighting: It’s not complete though – there’s some stuff I want to add to it yet. Parsnips obviously thinks that what’s missing is a cat:

I’m at home this morning while the painters finish off the repairs to the ceiling, so, having run out of work I can usefully do from home, I decided to return to my experimental quilt and practice some more free-motion quilting. The pattern is called Nikki’s Jigsaw Puzzle, and was a nice easy one to…