This is the second time I’ve written this post.  This morning I wrote a long (and, of course, incredibly witty and entertaining) version of it, but when I hit publish WordPress just laughed at me and ate it. And I didn’t have time to re-write it straight away, because I had to run off and catch a bus. So this will be a much briefer and nowhere as good version.  As you read it, just imagine you’re actually reading the much better original.  You would have enjoyed it…
Anyway, having read all of the projects in Free Motion Quilting for Beginners and wanting to try all the things, I decided I’d do just that – I’m going to work my way through each of the patterns in the book, and quilt a square in each (the actual projects in the book are for simple little objects to create using quilting, the idea being that you can practice on them rather than diving straight into a full sized quilt.  But you know me, why start with something simple when the deep end looks so much more fun?).  And anyway, this quilt is all about being experimental and trying new things, so what better than to turn it into a library of patterns (ok, a library of attempts at the patterns – based on experience so far, some will be more successful than others).
So, first up is a combination of “loop de loop” and “handwriting”.  Hanson suggests starting with handwriting because you’re already familiar with the movements involved. Yeah, except I’m terrible at writing in proper joined-up script (which of course you have to do when you’re “writing” with a sewing machine – you can’t exactly lift the pen off the paper between letters) – my natural writing style is a very not-joined-up printing. But I gave it a go, and it didn’t come out any worse than my writing on paper does 🙂 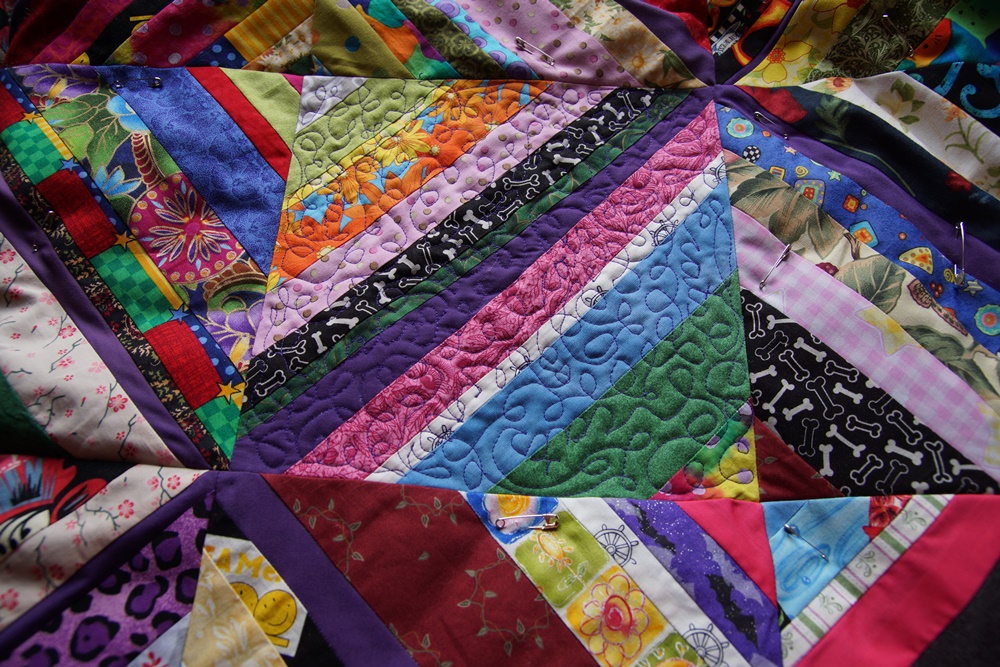 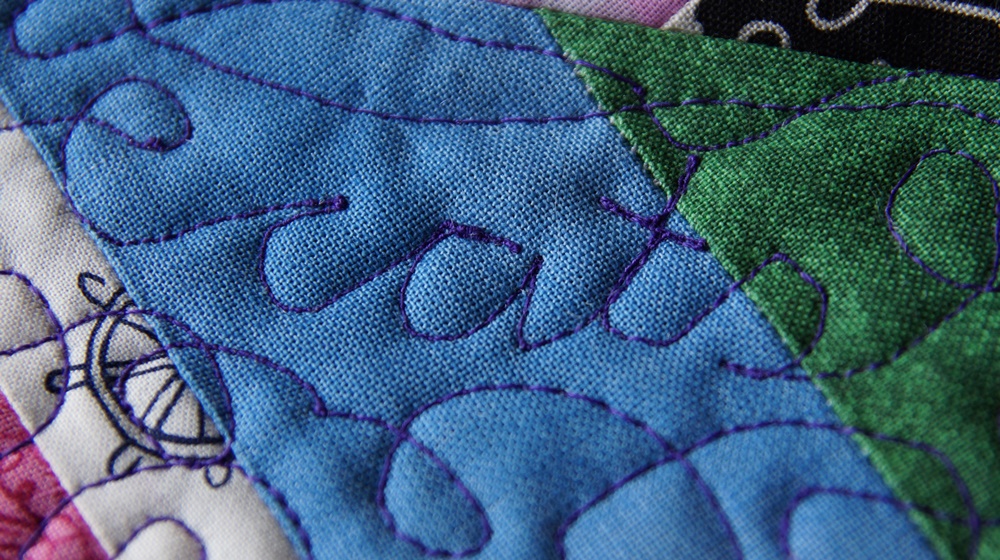 The next pattern was “stippling”. Of course, I’ve already tried this one out on a couple of other projects, but I decided to include it anyway, for completeness (and because I definitely still need a lot of practice at it – my stipples keep getting confused and turning into loops).  It turned out to be a lot trickier on a big quilt, with all that fabric to move around, not just a little cushion cover. 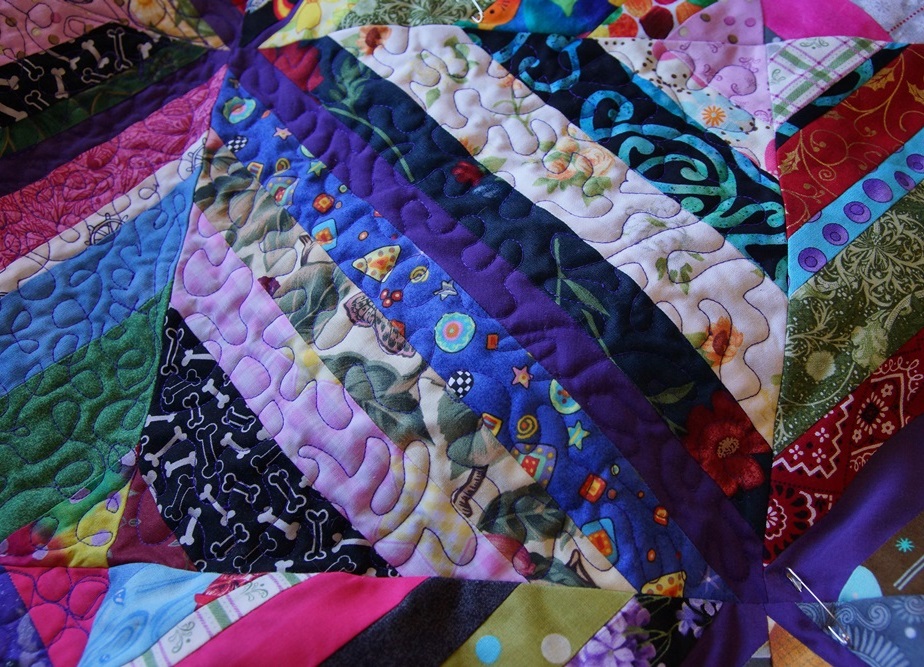 Then “pebbles”. This pattern was fun, and had the bonus effect of forcing me to slow down, because you have to retrace your steps quite often. My quilting definitely improves when I slow down, but I’ve noticed a tendency that the more I’m having to concentrate, the harder my foot goes down on the pedal (I think because I’m tensing up), so I start speeding up just when I should be slowing down (this is why it’s a very good thing that I don’t drive!). It uses a HUGE amount of cotton, though – I think I went through an entire bobbin’s worth on this square alone. 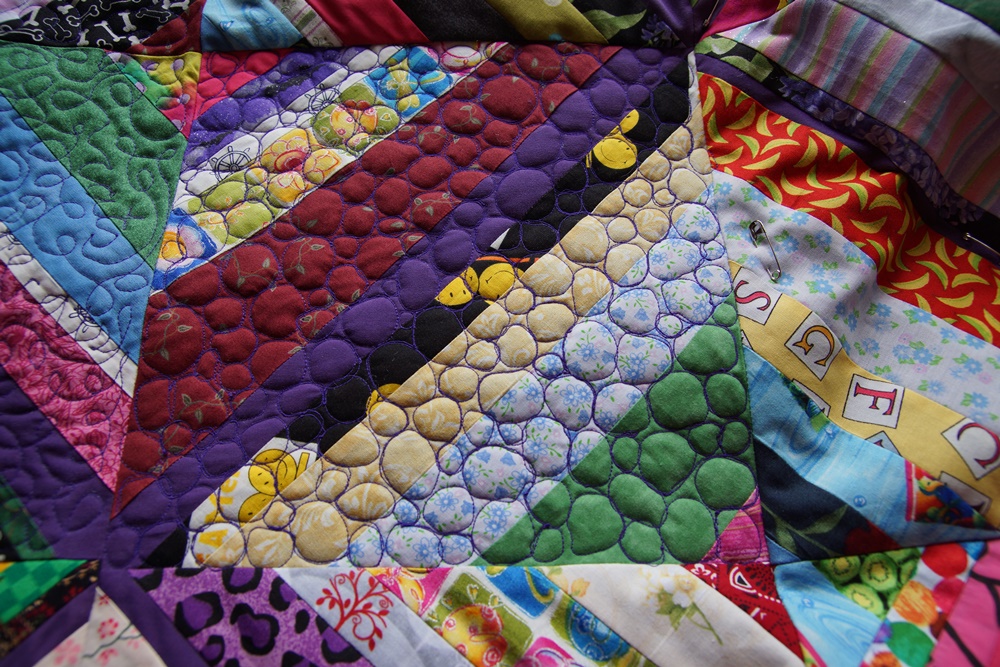 But I love the 3D effect it produces.

Finally, “chain of pearls”. Similar to pebbles, but for me it was a total fail – I just couldn’t manage to keep the spacing and size consistent. In retrospect, I probably shouldn’t have sewn them in the same direction as the stripes of fabric – they were too distracting. Oh well, the overall effect looks ok from a distance… if you squint your eyes a bit… and hold your head on just the right angle… 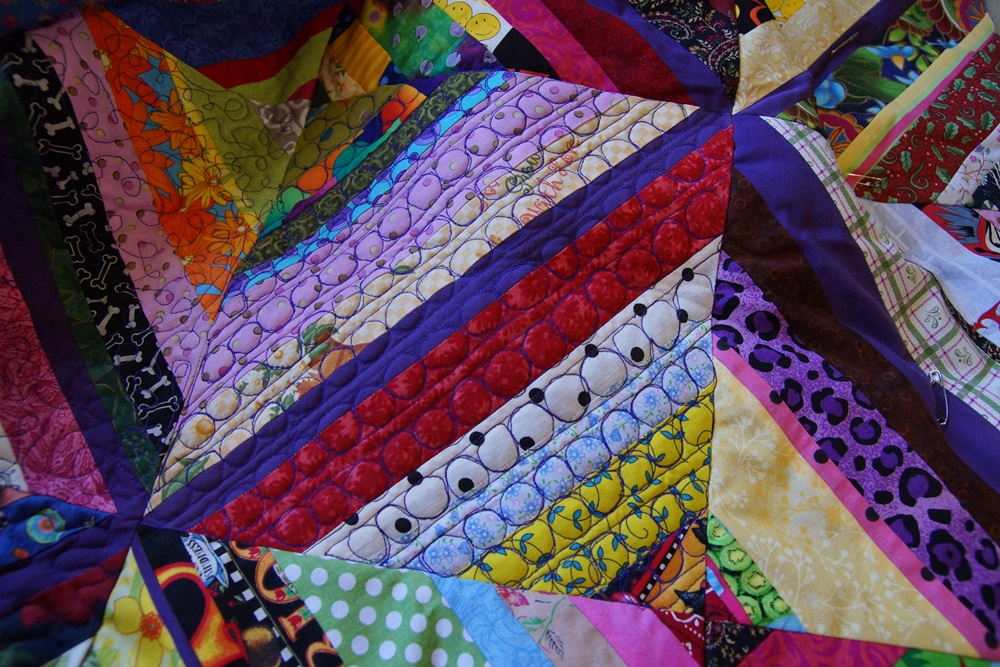 Things I have learnt so far:

Racing along here!  The third block is called a Dutch Pinwheel.  It has a lot of parts, but they’re all the same: half-square triangles. So the instructions are pretty short. Now that I’m feeling a little more confident in my ability to sew a proper quarter-inch seam, I decided it was safe to start using…

Thanks everyone for your kind comments about Pushkin.  No sign of her yet, and no response to the flyer I circulated around the neighbours, but I won’t give up all hope just yet. So, I mentioned Queenstown briefly in the previous post, but only as an aside to the main item, so those bookcrossers among…

The birds are definitely getting harder as we go along.  Getting all the sections to line up properly on the swallow was hard work (and, although you can’t really tell in the finished square, I didn’t entirely succeed), especially that final seam.  And this is only the half-way point!  I suspect the final few birds…