I’ve been using a couple of random bits of fabric and batting as a practice quilt sandwich, for checking tension and trying out new quilting patterns before I actually start quilting something. I’d completely filled up the piece with stitching, so I was about to throw it out and replace it with some new scraps, but then I realised that it was exactly the right size to make a quilt for a doll, so I quickly put some binding on it, and presented it to the smaller mini-Harvestbird today as a consolation prize for not being able to come to a show with me and her big sister: 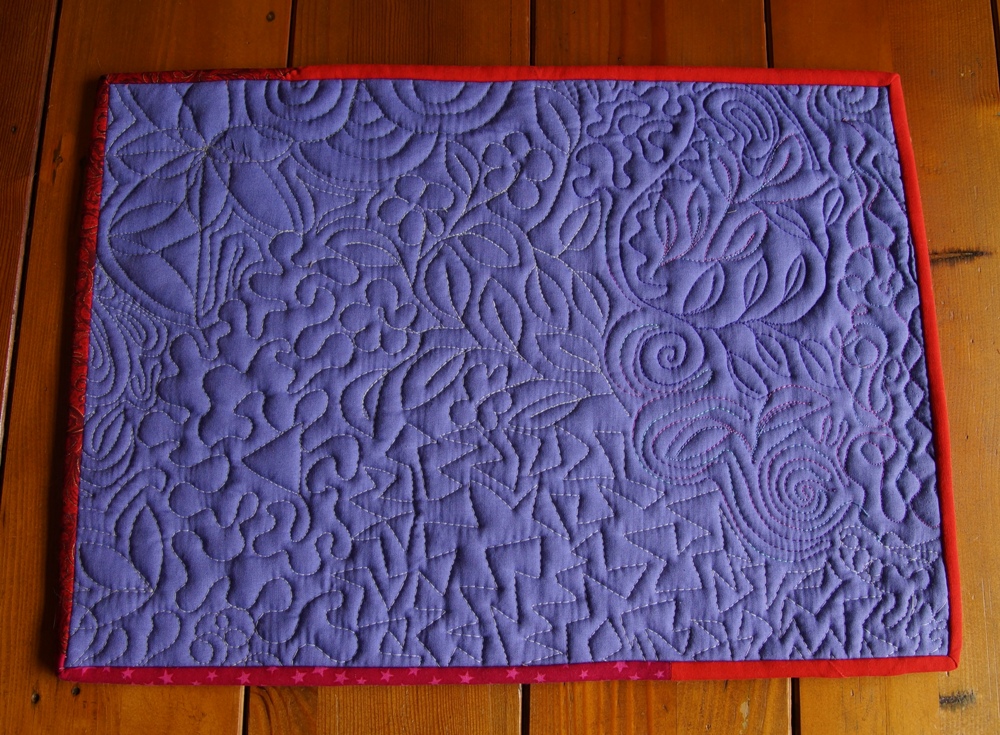 It’s very random – different patterns and thread colours, and lots of squiggly bits where I was trying to figure out what was wrong with the machine speed before I got it repaired) with absolutely no plan to it (not surprising, considering it was never supposed to be anything), but hopefully mini-Harvestbird’s dolls won’t be fussy 🙂

The reason I was taking the elder mini-Harvestbird to the theatre was that I got a text last night from Ade saying she’d double-booked herself, so had two tickets she couldn’t use for this afternoon’s performance of Beauty and the Beast at the local high school (not quite as horrific as it sounds, because Burnside High is known for its performing arts department, so their productions are usually pretty good), and would I like them. I said yes, and (reasoning that small children would be more interested in Beauty and the Beast than most adults I know) messaged Harvestbird to ask whether (assuming such a thing could be done without causing sibling disputes) she’d like me to take one of the girls. Luckily (?) the smaller mini-Harvestbird was sick, so the decision (and explanation to smaller mini-Harvestbird as to why she was missing out!) was pretty easy, so elder mini-Harvestbird and I spent the afternoon at the theatre.
It was actually a lot of fun – the show itself was pretty good for a high school production, even though Disney musicals aren’t exactly my thing (actually, I’ve never even seen the original movie of Beauty and the Beast (although of course I recognised about half of the songs just through how embedded in the culture they are)). What was the most fun though was seeing it through the eyes of a 6 year old. She was so excited by it all, hiding behind her hands when the Beast came out, and bouncing along in her seat to the songs, and turning to me at key plot points to whisper that I shouldn’t worry, because she knew it would have a happy ending. It was fun too seeing her learning the social conventions of theatre-going (which you forget have to be learnt), like when to clap, and she was very confused by the overture – when we were waiting before the lights went down she was exploding with impatience, and kept asking me when it would start, so I explained that everyone had to finish sitting down first, and then the doors would close, and then the lights go down and everyone would get quiet, and then it would start. When the music started and the curtains stayed closed, she turned to me and asked “why haven’t they started?” like she was being cheated – it hadn’t even occurred to me that to a child, an orchestra playing to a closed curtain wouldn’t seem much like anything had started!
Anyway, I think the show was a success. While we were waiting outside theatre afterwards for Harvestbird to come and pick us up, she chattered away to me about her favourite bits, and how she would have made the transformation of the Beast into the Prince so much better (flashing lights and smoke effects while the actor ducks down behind the scenery and removes his mask doesn’t quite measure up to the morphing that can be done in a cartoon, apparently 🙂 ), and how much she was looking forward to getting home and telling everyone all about it.

It’s been a pretty social week all round, actually. On Thursday night I hosted the craft meetup (it normally rotates round a few different people’s places, interspersed with meeting in bars, so I put up my hand last time the organiser was planning the venues for the next few weeks). I think 8 people turned up – if there’d been any more it might have been a struggle to squeeze them all into the lounge, so that was a nice number. The evening went really well, and I even managed to get a bit of sewing done (putting the binding on the doll’s quilt, actually) in between making people cups of tea and passing around cake. Plus it was nice not to have to venture out into the horrible weather myself, so I think I’ll offer to be put into the regular rotation of venues.
Talking of craft meetups, I forgot to post a picture of the insects embroidery I’d been working on at the meetups, which I finally finished last week: 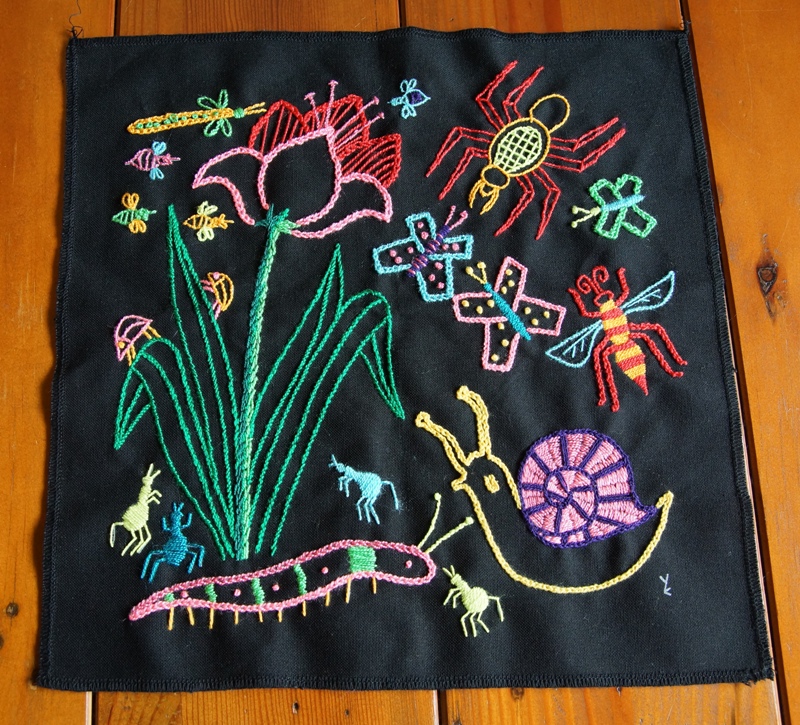 As always seems to be the case with me and embroidery projects, I’ve got no idea what I’m going to do with it now that it’s finished. Maybe I should do another giveaway – if you want it, let me know!

This month is Diversity Fest at the university, with all sorts of talks and other events themed around various forms of diversity. Last night I went to a screening of Intersexion, a documentary about intersex people, followed by a panel discussion. The film was really interesting – though horrifying to hear the experiences of people who whose genitals were mutilated in childhood without their consent, all in the name of making them “normal”, and the effects that has had on them in adulthood. And even worse to learn that this is still happening to many intersex babies born today 🙁 The discussion afterwards was great too – the panel was made up of an intersex person, a non-binary person from Qtopia (the student/youth LGBTI+ group that was hosting the event), and a gender studies/cultural studies lecturer, plus there were some really insightful questions and comments from the audience.

And finally, a video. Ages ago (the day I submitted my thesis, actually), I, along with several other students, was asked by the Head of the Linguistics Department if I’d be a talking head for a promotional campaign they’re doing for the department. So of course I said yes, and was interviewed, and then completely forgot about it, until this week when the videos went onto YouTube, and I get to see how badly I stumbled through describing my research (actually, they’ve done a good job of editing it together in a way that almost sounds like I know what I’m talking about!)
Ok, let’s see if I can get this embed code to work…

I’ve actually been home for a few days, but they still felt like holiday days, mainly because Brother and the two boys came back to Christchurch with me.  The trip to Christchurch was their (and my!) Christmas present, because SIL had bought us all tickets to go to a Weird Al Yankovic concert.  The boys…

I spent a lovely day today with Pieta at a Christmas craft workshop run by Rekindle.  Rekindle were set up after the earthquakes to try and make use of some of the huge amount of waste from demolished buildings.  They’ve expanded now to find ways of making use of all sorts of what they call…

I unpicked the seam on the kestrel, and very very carefully lined the two halves back up, and pinned and basted it, and checked again that the crucial part of the wing matched properly, and sewed the seam… and it still doesn’t quite line up.  So that’s it.  I’m giving up and accepting the fact…

ou want to hear my latest excuse for not having posted here for ages?  This time it’s not me that’s been sick (or the DearDiary site), but my computer.  I discovered a nasty malware infection on it, and as removing it looked like it was going to be a long and involved process (it was…

The spambots have obviously discovered the new DD, posting weird random comments to random entries. Sometimes the total disconnect between entry and comment is amusing, in how blatantly obvious it is that a human reader was not part of the process. A couple of examples from today: “That is a thing I must find more…