So much for my good intentions of regularly posting to my blog – that seems to have fallen by the wayside a bit!  Partly because I’ve been busy (last week I went to Toastmasters on Tuesday night, my craft group on Thursday night, and a union Rainbow Te Kahukura function on Friday night.  And this week there’s Toastmasters on Tuesday (which I’m meant to be giving a speech at – I’d better do some practising!), then a Women’s March Aotearoa kōrero on Wednesday, and I’m going to a movie with Lytteltonwitch on Friday (theoretically I should also be going to the craft group on Thursday, but four nights out in a row seems a bit excessive!).  I really need to slow down a bit, don’t I? 🙂 ), but mostly it’s because I wanted to report progress on my Flower Garden quilt, but it’s too hard to take a decent photo of it, so I’ve been putting it off until it’s finished, which means I’ve also been putting off blogging.
So instead, here’s a not decent photo of the quilt, all folded up and waiting for me to have a quiet evening or three to hand-stitch the binding down. 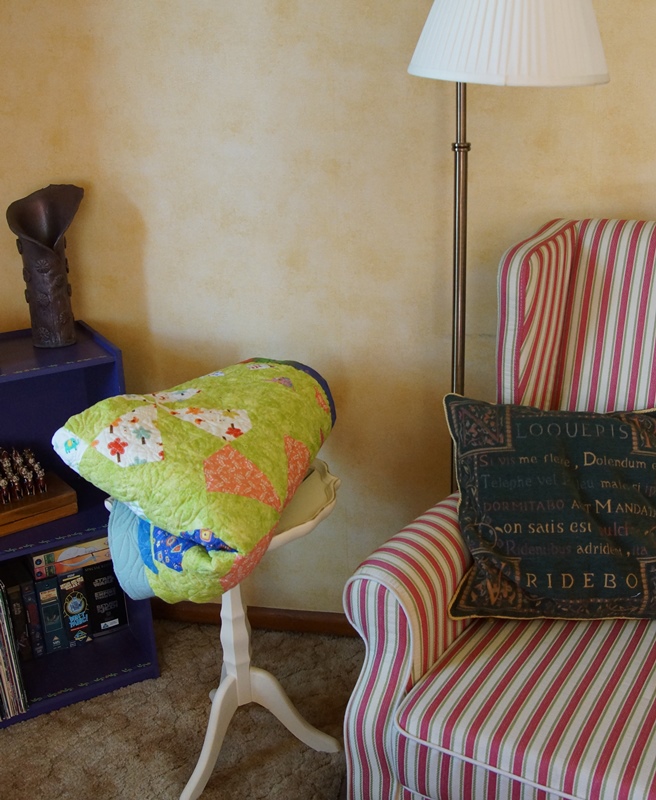 Which means yes, the quilting is finally finished! It took way longer than I expected – I’d underestimated just how much area a full size quilt has, and it’s not the sort of project you can work on for 10 minutes at a time – you really need to spend an hour or so (or I do, anyway) to get properly into the rhythm of the quilting. Which means you have to have lots of hour or so long chunks of time free, and see above for how that hasn’t really been happening. But anyway, I finished the quilting last weekend, then made the binding yesterday, so now I just have to do the hand-stitching bit (I could machine sew the binding down, but I struggle to keep it looking neat even on a small quilt, so I thought it’s probably safest to hand sew this one, rather than trying to struggle with sewing a super-accurate tiny hem on such a huge heavy quilt!)
While I was making the binding, I started playing with the little scraps I was cutting off the fabric, which led to more playing with the collection of tiny bits in my scrap basket (and adding in a few stray blocks I’d made while experimenting with some other ideas), which evolved into the beginnings of an idea I’ve had in the back of my mind for ages – a truly scrappy quilt, with no pattern, just randomly throwing together whatever scraps I had to hand, whether they go together or not.  A bit like what I did when I made my hot water bottle cover, but on a bigger scale, and with a bit of inspiration drawn from Deb Robertson’s exhibition of scrappy quilts (which I didn’t make time to go and see in person, and really wish I had!), and from this quilt (though mine is made up of *much* smaller pieces!).  By the end of the day yesterday I had several decent-sized blocks: 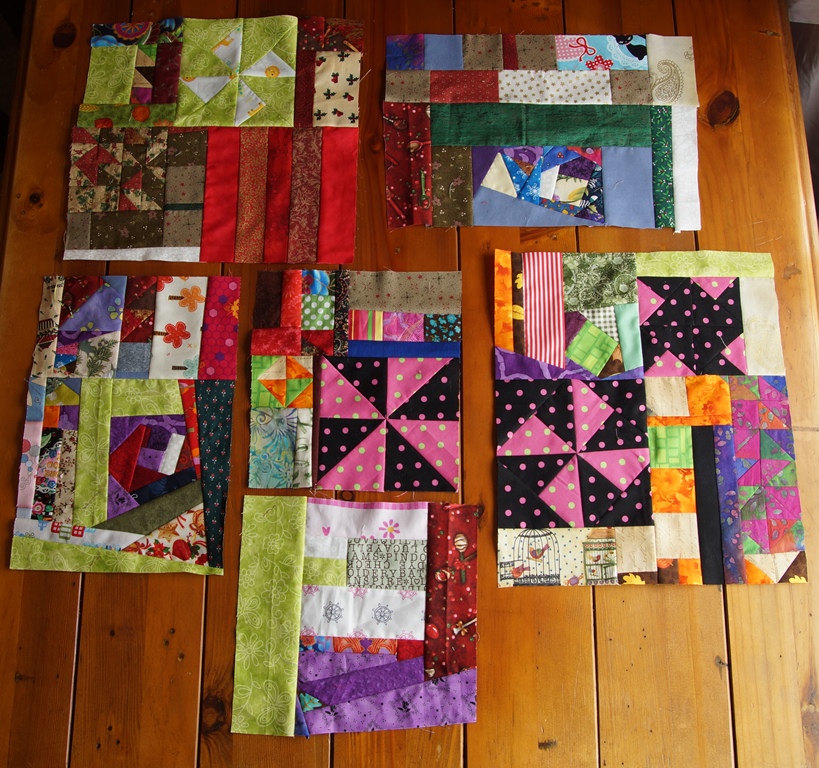 They’re all different sizes, and I haven’t squared them up properly, but the idea is that I’ll build them up until they’re the same height at least, then I can sew them together into a row, and continue the process until I’ve got a quilt.  It’s going to be ugly and scrappy, and completely uncoordinated, with hardly a straight line in sight, but hopefully the overall effect will be something cool (and if not, who cares – the only fabric it’s costing me is bits I would have thrown out otherwise, and it’ll still do its job of keeping someone warm).  And in the meantime, I’m having fun, and learning a lot.

I spent this afternoon with Harvestbird and the mini-Harvestbirds at a garden party hosted by Dorothy’s pop-up tearooms (i.e. my friend Jan, who catered my graduation party).  After cold and wet weather earlier in the week, it was a lovely afternoon sitting under the trees eating scones and cucumber sandwiches and an array of incredible…

ytteltonwitch came over today, and we went to investigate a charity shop she’d found that had the bookcrossing holy grail: three books for a dollar.  They had a really good selection, too, so I ended up investing $10 in stocking up with potential themed releases (I was punished for such extravagance when the pile fell…