It’s 2015 here in New Zealand, even if most of the rest of the world is still to catch up, and has dawned a lovely sunny day after yesterday’s rain. I reckon that augurs great things for the year – and even if it doesn’t, I fully intend to have a good year anyway 🙂  The usual “year in review” posts will follow shortly.
I wasn’t going to bother staying up to see the New Year in last night, but I ended up being awake for it anyway, because the first batch of neighbours to set off fireworks either had their clocks set wrong or are just incredibly impatient, and started setting them off at 11.  That started a trend from the rest of the neighbours, so there was pretty much a continual series of booms and bangs for the next hour and a half.  Poor Parsnips was cowering under the bed the whole time, and I gave up trying to sleep and read a book instead.

I went over to feed the chickens (and Flick the cat, who was very pleased to see me – I think he’s been feeling lonely – we had to have a very long brushing and scratching under the chin session before he would leave my side) again this morning.  There was a moment of panic when I arrived to find the door to their enclosure hanging open (it doesn’t have a proper latch, but is just wedged up against the wall, so I suspect the wind yesterday afternoon loosened it enough for it to fall open).  However, as I was about to start a frantic chicken search, I heard clucking behind me, and there were the two chickens following me up the drive.  They’ve obviously figured out where the food comes from!  Rosalee had warned me they have a tendency to escape and go wandering around the neighbourhood, but she said they always come home for food, and sure enough, when I opened their feed bin they both dashed straight into their enclosure to wait to be fed.  Smart animals!
I took my camera, so I was able to get a photo of the red hen for Yetzirah 🙂 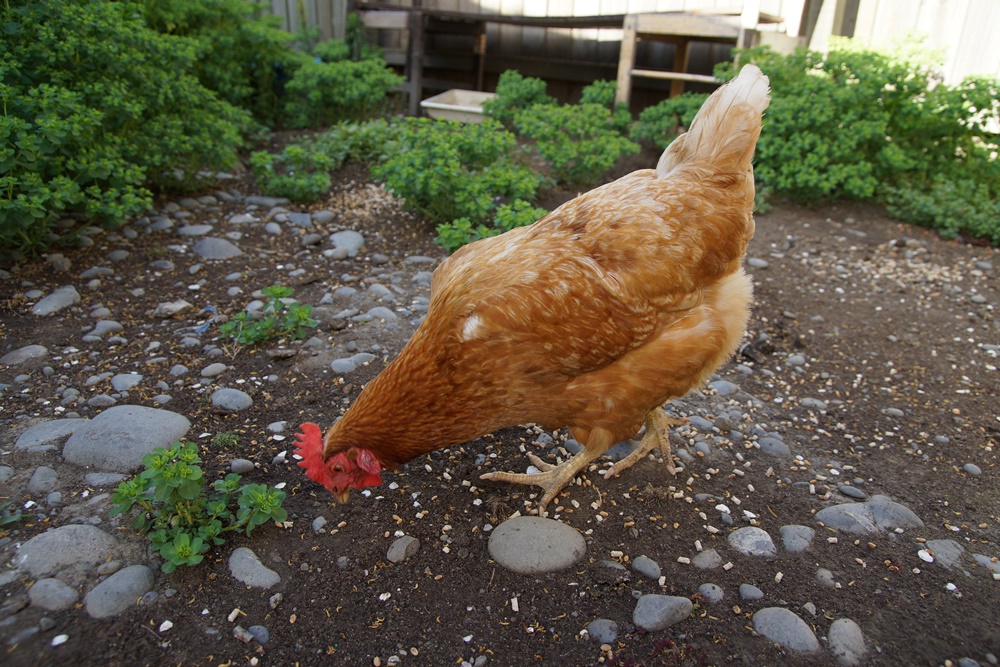 The other one, a black hen, was camera shy and kept running behind the shed when I pointed the camera in her direction, so I let her have her privacy 😉
There were two presents waiting for me this time: 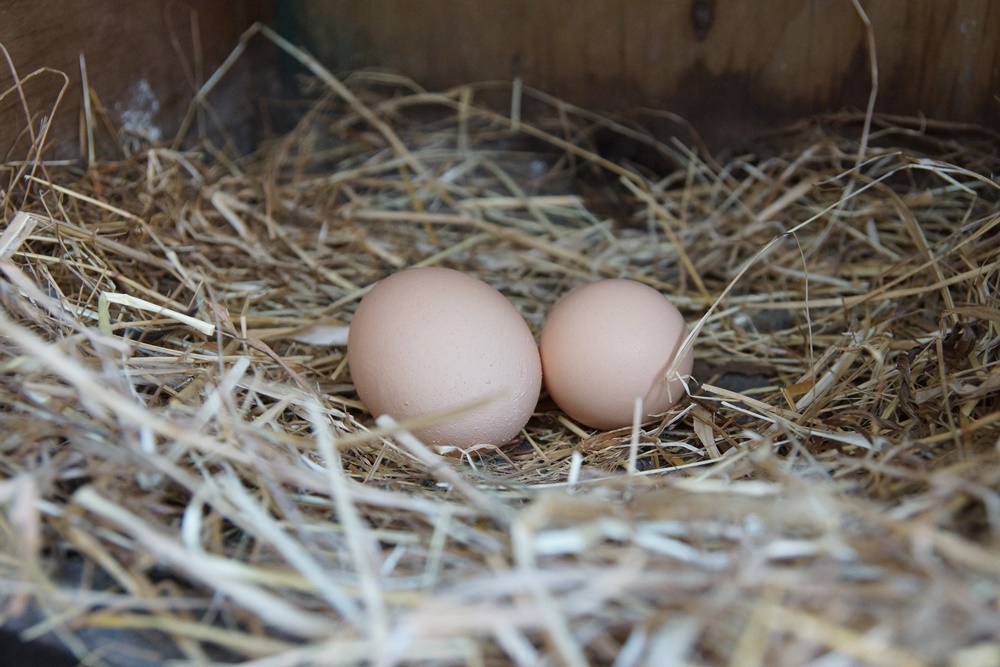 The size difference between the two eggs is incredible. It’s even more noticeable when you compare them to a couple of shop-bought eggs I had in the fridge: 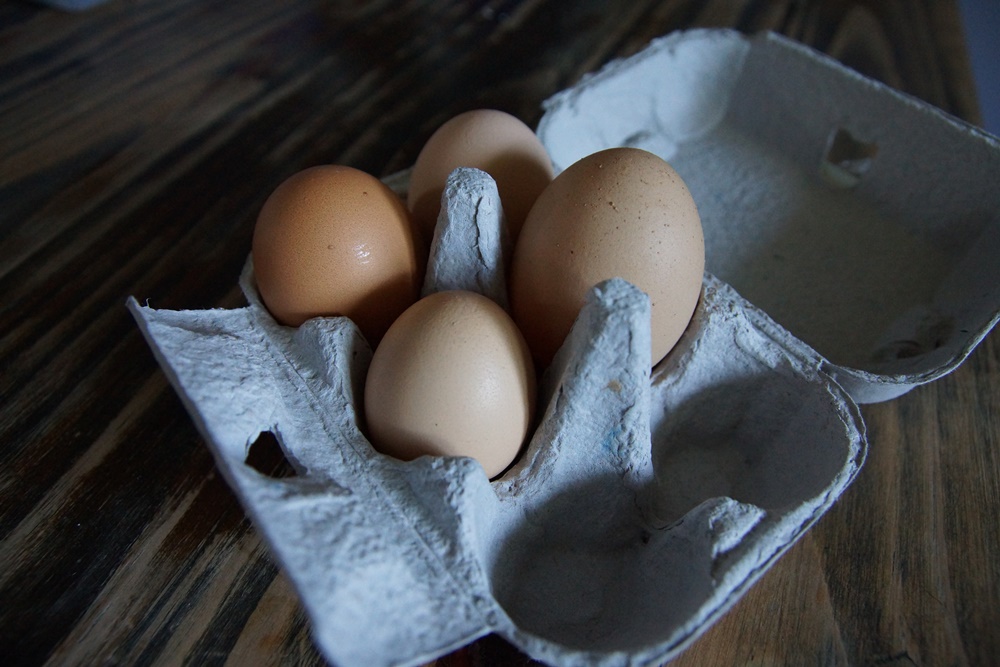 I couldn’t actually close the egg carton the big one is so huge, and the little one looks more like a bantam egg (both chickens are normal sized, though – I think Rosalee said they were rescued battery hens).

Two more squares finished on the quilt.  This one, “wood grain”, I think is my favourite so far – it was really fun to do, and ended up looking great (it’s very forgiving of mistakes!): 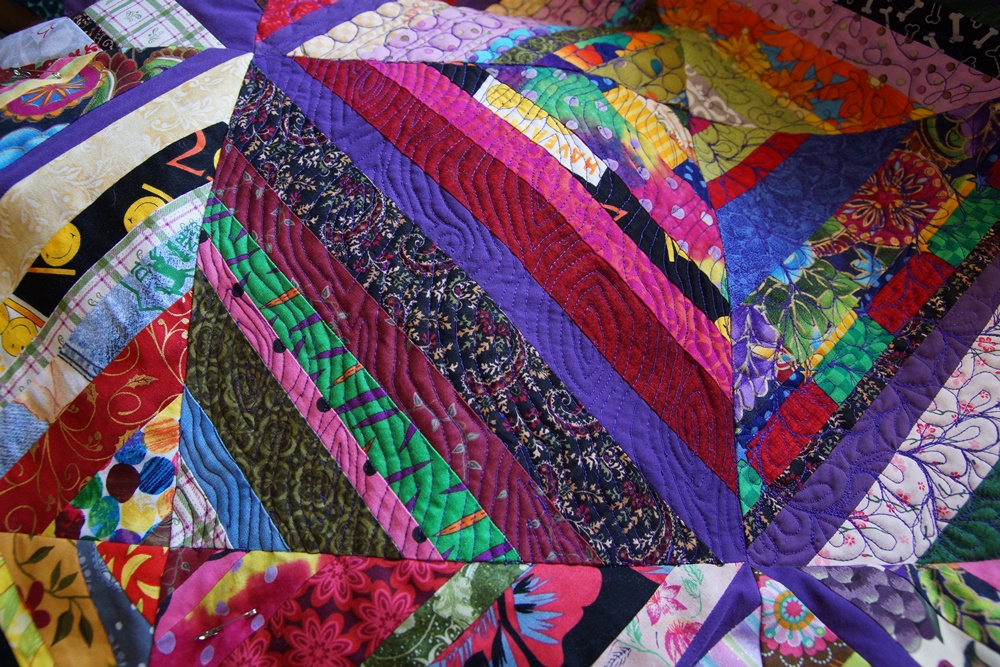 The other, “swirls”, was a bit trickier (I really need to practice the backtracking over lines I’ve already sewn bit!), but still cool: 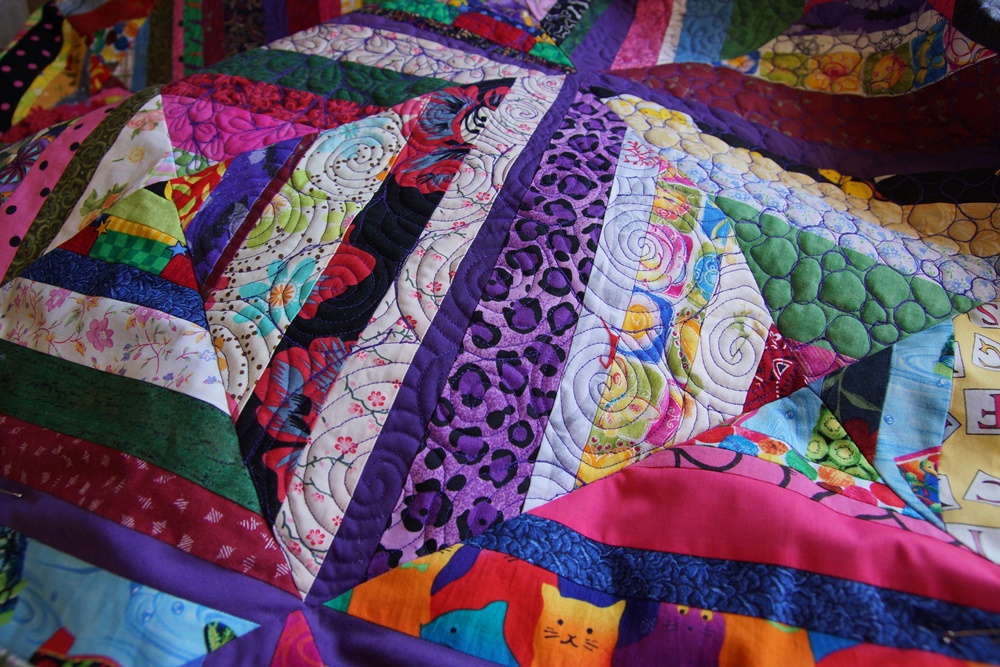 If you’ve been keeping count, that makes 9 squares complete, out of the 25 total.  So the entire inner section is done, it’s just the outer circle of squares left to do, which theoretically should be a bit easier because working on the edge of the quilt means you don’t have to try and squeeze half a quilt into the little space between the two arms of the sewing machine.  However, it also means I’ve run out of patterns in my book (well, sort of – there is actually one more pattern, but it’s “print tracking”, where you basically trace round the outside of designs on the fabric.  And as all my fabric is cut into thin strips, there aren’t really any designs big enough to do that with.)  So I’m now going to move on to interesting-looking patterns I’ve seen on various blogs.  I’m sure some of them will prove to be way beyond my skill-level, but I’m also sure I’ll have fun trying… 🙂

I didn’t have time to post these the other night, but here’s a few photos from the afternoon at Little River.  Pretty much the essence of summer: I would be incredibly jealous of their house, which is a lovely wee cottage in the classic NZ early settlers style, but then I remember how far they…

really wish on-line booking agents would just tell you the actual price of a ticket up front, instead of advertising one price and then adding on a pile of (unavoidable) additional fees.  For example, today I booked a ticket for a seminar Harvestbird and I are going to in a couple of weeks.  The advertised…

Ages ago I asked Deb Robertson how she manages to produce so many quilts while juggling work and children, and she told me she makes a lot of use of those spare half hours at the beginning and end of the day, when you can sew a few seams, or cut a few pieces, even…

ne of the (many) things I really love about my job is the cool people I get to meet. Yesterday afternoon, for example, I had a meeting with Julia Holden, the artist who painted the Wish You Were Here series of billboards that were displayed in Auckland,  and now Wellington.  She was telling us about the…

o, not mine – that’s a couple of years off yet.  But I did take part in the ceremony today.  There’s a tradition that the general staff (i.e. non-academics) can volunteer to help out at graduation doing things like ushering parents to their seats, or helping the marshalls organise the students.  Or, as I was…