It’s stinking hot today (seriously – I hung out a load of washing, and it was dry before the second load was even finished in the washing machine), so of course it was the perfect day to spend sitting over a hot ironing board working on my latest project.
It’s for a Christmas present, but as the recipients don’t read this (I hope!), I think I’m safe to show some progress pics.
As always, the before picture doesn’t give away many clues (other than the fact that I may have had a little fabric-shopping expedition yesterday… because of course I couldn’t just use the fabrics in my stash – I needed to go and buy exactly the right colours for every little 5 cm square…)

Did I mention 5 cm squares?  Yeah, a whole 480 of them by my calculation.  And they needed to be perfectly square and exactly the right size.  Mum, this is when that Christmas present of a rotary cutter thing would have really come in handy – do you know how hard it is to cut out perfect 5 cm squares (actually, they’re technically 2 inch squares – I ended up working in imperial instead of metric, because the seam allowance markers on my trusty old sewing machine are in eighths of an inch, so it was easier to switch over to imperial for everything than try and calculate all the conversions) using just a ruler, pencil and scissors?
Anyway, about 2 hours later I’d cut the first set of 96 squares and laid out the design: 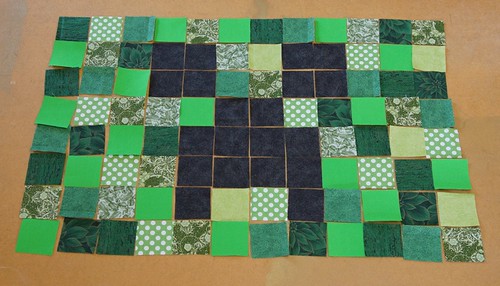 At this stage the geekier among you will (hopefully) recognise what I’m making: it’s a portrait of this guy, one of the scarier Minecraft monsters.
And it’s destined to become one of a set of Minecraft-themed placemats, a silly little gift for my brother and his family (not that my brother and sister-in-law are into Minecraft, but the kids all are, so in the way of parents everywhere they’ve learnt to recognise their children’s obsessions and will hopefully be amused by the idea of having them around their dinner table 🙂  Anyway, it’s really for the kids, because the proper present I’m giving them is on-line, which makes it hard to wrap, so I thought I’d create something physical to go with it.  I’d had a few other vague ideas, but then it struck me how perfectly the pixelation of Minecraft would suit itself to being patchworked, and had to give it a go).
An hour or two of sewing later, and creeper-face is a lot smaller (all those 2″ squares are more like 1″ now): 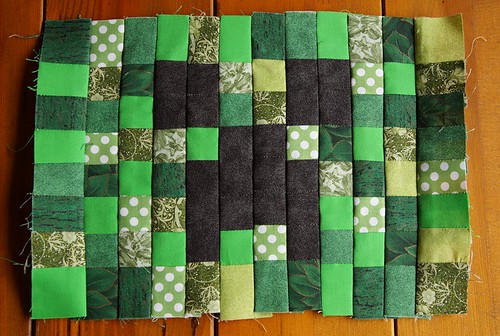 My incredibly accurate measuring and cutting of the squares obviously wasn’t, because they didn’t all line up properly when I sewed the strips together, but the misalignments aren’t too obvious.  I like the overall effect, anyway, and considering it’s my first attempt at this sort of patchwork, and I’m pretty much making it up as I go along, I think I did ok!
Next in line, a pig: 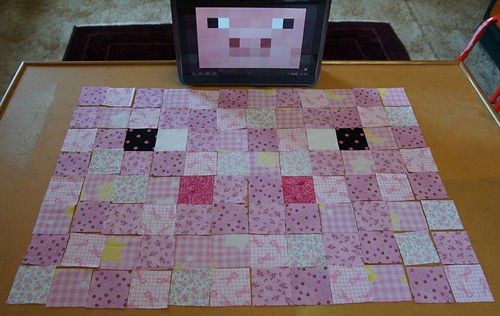 (Yes, I was using reference images – I may be an utter geek, but I’m not enough of one to be able to draw videogame characters from memory!)

Half the strips sewn. You can see how much area is lost to the seams! 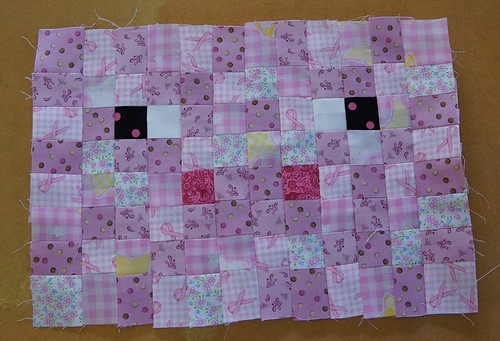 And the finished face.  It’s not as obvious a face as the creeper (mainly because I didn’t have enough different shades of pink), but I kind of like that – the way it could just be a random pattern of squares, but when you look closer there’s a subtle pig face hidden in there (which the kids will recognise instantly).
I haven’t quite finished cutting out the squares for the next face: 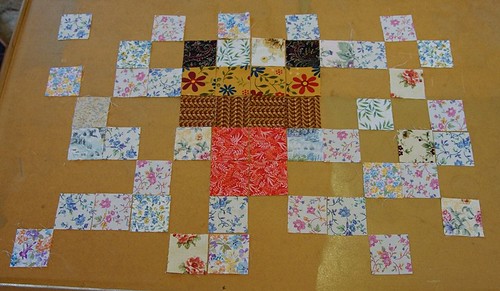 So now I’ve just got to cut out the rest of the squares for the chicken, and sew them all together, and then do the other two creatures, and then there’s all the backing and quilting and finishing-off stuff… yeah, might take me another weekend or two to finish them.

And for no particular reason, a photo of my chief assistant in this project: 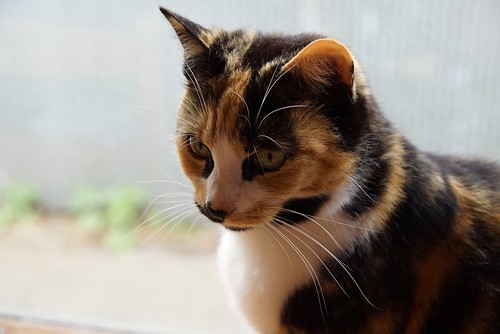 In a dusty corner of our porch are three large stones, one for each cat buried in our backyard. Our section sits right on top of one of the gravel banks that criss-cross the Canterbury plains, left over from the Waimakariri’s meanderings, and the reason our suburb got off so lightly in the earthquakes. It’s…

You’ll all be relieved to hear that I made it to the supermarket (it’s stopped raining, but still very cold, so I compromised by taking the bus there and a taxi back, to minimise my waiting around in the cold time) so Parsnips is now replete with catfood and very happy.  And I’m stocked up…

inally I’ve got my new computer!  I almost had it a couple of weeks ago, but then I didn’t.  But that’s a story best told with a ridiculous number of photos (don’t say I didn’t warn you).  So, without further ado, how to build a computer: Except it wasn’t.  Because that’s where it all started…