Most important thing:  I finished the Lego quilt last weekend, and Lytteltonwitch delivered it to her friend, who apparently loved it.  I was pretty pleased with the finished product too: 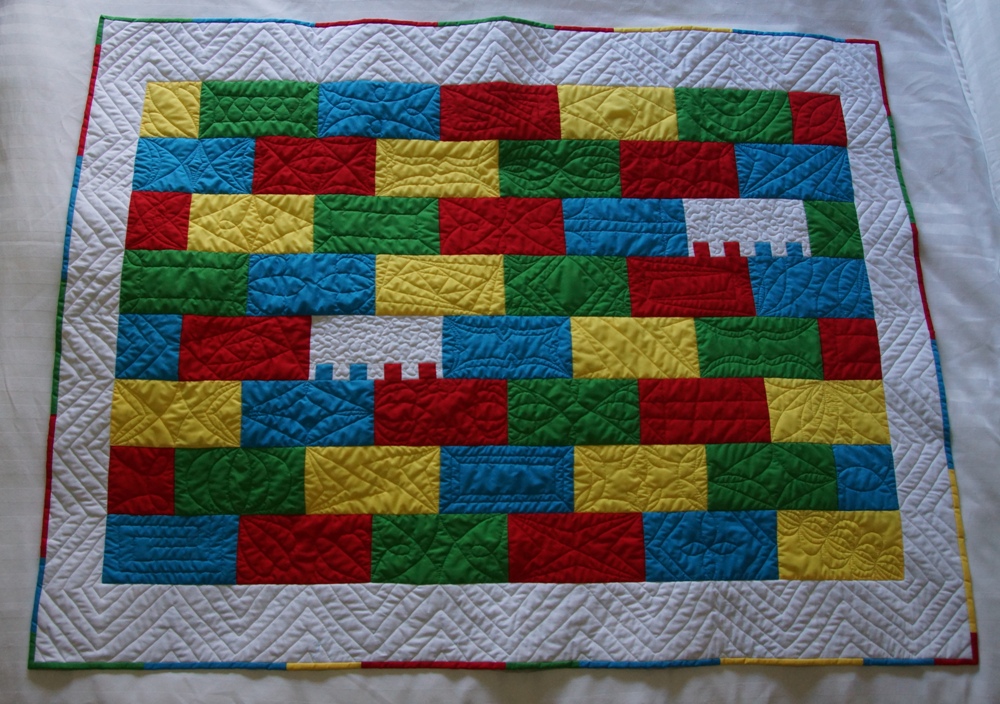 The invisible thread, even though it was a bit of a pain to work with, worked out really well, giving texture to the blocks without standing out too much, which is what I wanted. And I really liked how the quilting in the border turned out.
It’s backed with some amazing Buzzy Bee fabric that Lytteltonwitch found, which goes really well with the colours and theme of the quilt. And I gave it a scrappy binding made from the left-overs of the block fabrics. 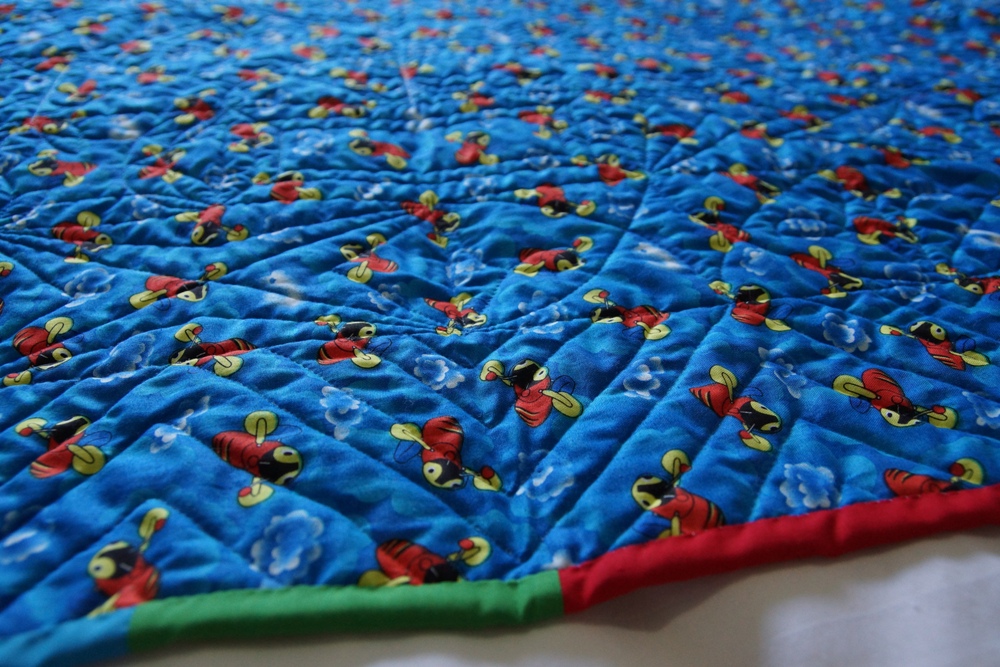 So, my first commissioned quilt successfully accomplished. Apparently my payment is going to be in the form of dinner at the Noodle Markets tomorrow night – seems like a fair trade to me 🙂

I meant to post the pictures of the finished quilt sooner, but I’ve been incredibly busy – mostly at work, where we’re very close to launching another big project (I can tell you about it next week 🙂 ), which we’ve been working on for the last year or so, and which has been taking up the majority of my time for the last month (to the extent that I ended up working on Waitangi Day, just to meet a critical deadline).  I’ve been busy socially, too:  I’ve already been out three nights this week, plus I’m out tonight and tomorrow night as well – this must be some sort of record for me!
Tuesday night was Toastmasters, and I decided that would be my last meeting.  The club president had said something in his closing remarks a couple of weeks ago encouraging us to reflect on our aims for the year, and I realised I don’t actually have any Toastmasters-related aims.  I joined the club with the aims of improving my confidence, and to not be so nervous when I had to give presentations at work, and I have definitely achieved both of those things – I’ve spoken at conferences, and run meetings, and all sorts of things I couldn’t have imagined doing a few years ago.  And I’m not really interested in the competitive side of Toastmasters, or in learning to become a motivational speaker or anything like that – I’m good enough at public speaking for the kinds of public speaking I need to do, so I don’t feel greatly inspired to learn more.  Which means the only reason I was still going along to Toastmasters is for the social side, and I haven’t even been getting as much of that out of the club lately – a few of the people I used to get on with really well have left, and while new people have come along to replace them, it hasn’t really been the same (plus, as in any club, there’s one or two people who are annoying, and without the buffer of lots of people I do like, it’s harder to tolerate them).  Anyway, as this week is proving, I’m not exactly short of social activities!  So, as Tuesday was scheduled to be a short meeting followed by drinks, I decided to make that my last meeting, so I could go out with everyone for a drink afterwards and say goodbye.
Wednesday was a much more fun outing.  Jacq invited me to go to a recording of a podcast (The Nerd Degree) which their partner is sometimes in the cast for (though not for this episode).  It’s a brilliantly funny podcast, and even better in person (it was fun putting faces to the voices I’d been listening to online, plus you get to see all the facial expressions and other visual stuff that doesn’t translate to audio).  It’s recorded in a small studio in Ferrymead that’s just big enough to have a small audience (I think there were maybe 20 people there), so we were encouraged to make as much noise as possible with our applause so that it would seem like a bigger audience.  There was no problem with not making enough noise when it came to laughing – everyone was killing themselves with laughter!  They’ve got a small bar at the venue, plus you can order pizza to be delivered from Winne Bagoes, so we shared a couple of pizzas for dinner during the interval.  A great night all round (though very hard to wake up in time for work the next morning!)
Then last night I went round to Dana’s place to watch anime with her and her friends.  We’ve been watching a series called Inuyasha, and I can never remember the names of the characters, so I started calling them things like “Dog boy” (a lot of the characters are demons, so they look half human and half animal), “High school girl”, “Little fox boy” and so on.  Dana picked up on this, and now she sends me messages asking if I want to come round and watch Dog Boy with them 🙂  It’s technically a children’s series, but it’s very entertaining, especially because we’re watching it in Japanese (with subtitles, of course!), so you get all those over-the-top anime voices.
I was actually double-booked for tonight, socially, because I’d invited Dan and his partner round for dinner, and then the Gwilks invited me over for a games evening.  But it turned out that Dan had to cancel, so it all worked out nicely, and now I’m going round to the Gwilks’ this evening (actually, I should really go and get myself some dinner, or I’ll be late – might have to finish this post off in another post tomorrow…)

As promised, a picture of the quilt top I sewed for my supervisor’s baby while I was on sick leave: It’s an “eye spy” quilt – each of the squares is a fabric with different pictures on it (or letters or numbers, in some), so when the child gets older it becomes an eye spy…

rother and family were up at the weekend to go to a concert. It was a bit of a flying visit, but I met up with them for dinner on Sunday night, and then took the morning off on Monday (finally using up some time in lieu I accumulated months ago!) so I could faciliate…

1. Housework done, a casserole simmering away that will provide quick and easy meals when I’m working late this week, the sun is still shining despite the threat of rain, and enough time to sit and eat lunch with a book. 2. The closest I’ll ever get to gardening. One of the supermarket chains was…

The two main programming languages we use at work to build helpful little tools to speed up the tedious jobs are Javascript and Python.  I’ve been making reasonably good progress at learning Javascript, but the Python stuff I’ve been leaving to Lucy-Jane, who is a much more skilled programmer than me.  On Friday afternoon, she…

or a change, this weekend arrived with nothing written into my diary.  It actually left me feeling slightly at a loss this morning – I seem to have had something planned every weekend for months, so not having to work around being at some particular place at some particular time felt weird.  But I quickly…

ot home last night and found a parcel waiting for me in my letterbox.  Even better, it was a parcel full of fabric!  Mum had texted me the other day to say that a craft shop near her was having a closing down sale, and did I want her to see if she could get…