I still haven’t got round to buying more of the blue thread I’m using for the Birds in Flight quilt, so in the meantime I’ve been working on the Lego quilt.  This time I’m quilting it much more loosely (to keep the quilt nice and soft, seeing as it’s intended for a baby), so it’s been going much faster.  There’s only a bit of the border area left to go: 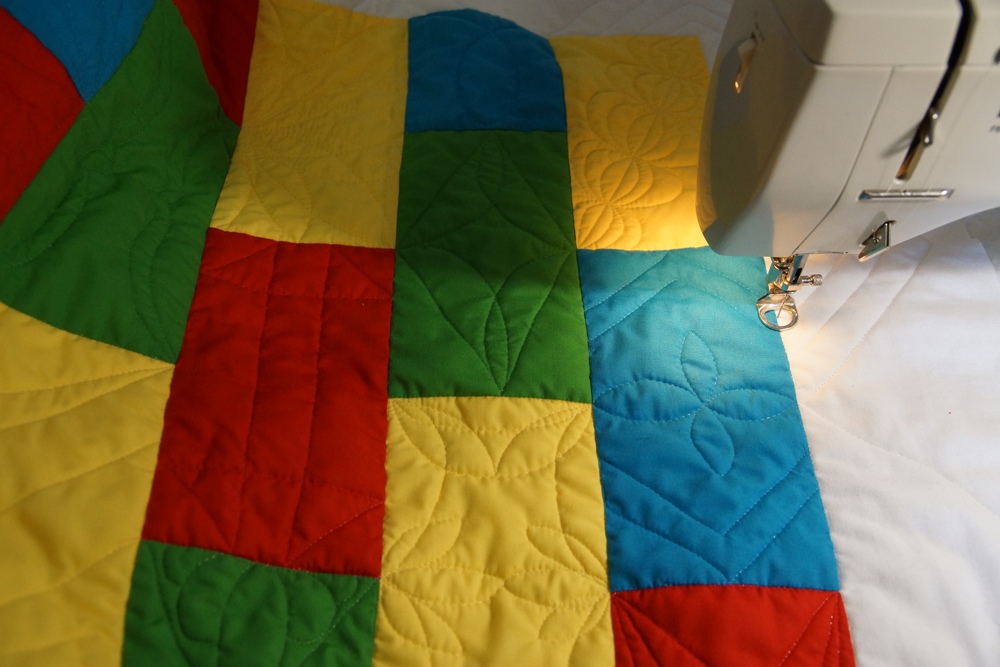 I’ve been using a monofilament thread to quilt it, which has been… challenging (especially because I only just noticed the bit on that page where they recommend not using it in the bobbin… which I have been… oh well, it seemed to work ok anyway).  It sews great once you get going, but the thread is so fine and almost invisible (which is the whole point) that anything that requires cutting the thread and restarting (which means having to tie off the loose threads and threading them into a hand-sewing needle to bury them inside the quilt so they won’t work loose) is very hard work – just seeing the thread well enough to be able to tie a knot in it is hard enough, but threading a needle was almost impossible!  I did a lot of back-tracking over previously sewn lines to get to new areas of the quilt just so I could avoid ever breaking the thread!
The invisible quilting does look nice though, especially on a quilt like this where whatever thread colour I’d chosen would have stood out too much.  But I don’t think I’ll be using it on a regular basis – it’s just too difficult.
As you can probably see in the wee sample in the photo above, I used the different “bricks” of the Lego to experiment with different quilting patterns (inspired by Angela Walters’s Shape by Shape book, which is a seriously useful resource – although I don’t think I actually ended up using any of her patterns exactly as she has them in the book, they’re a great leaping-off point).  I’d originally planned to just pick a single design and use it in all the blocks, but I couldn’t find one I liked enough to repeat that many times, so I decided to use a few different ones.  In the end I think I managed to have no two exactly alike across the entire quilt (though some of the variations are pretty minor).  There’s a few bricks that didn’t turn out quite as well as I’d like, and one or two places I might have been tempted to unpick and redo if that wouldn’t have been so hard with the monofilament.  I suppose that’s one way to learn not to be such a perfectionist – make it too hard to unpick mistakes!  Hopefully none of the mistakes are too obvious – I keep telling myself that nobody knows what pattern I was aiming for, so they won’t know that I got it wrong 🙂

I finally finished the quilt top for the Little Squares quilt!  SO MANY seams to match!  I am starting to understand why people put sashing between quilt blocks.  I’m really pleased with how it looks, though: Now I’ve just got to quilt it. I’ve got a few ideas for what I want to do, but…

I made a start on quilting the eye-spy quilt yesterday.  I didn’t get very far, unfortunately, because after about half an hour I suddenly seemed to have lost all my carefully practised skill at controlling the speed.  Now, no matter how gently I pressed on the foot pedal, I could only produce either dead stop…