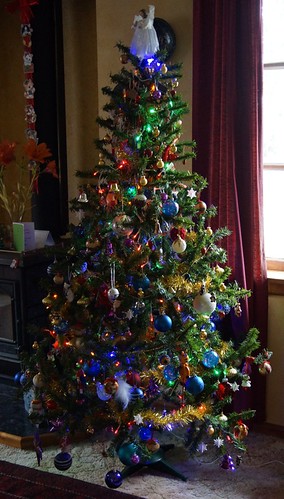 Harvestbird and I and a mini-Harvestbird had a shopping trip to the Warehouse this morning (with bonus cake at Make Cafe and playground time afterwards), so while we were there I found some lights for the tree (with some difficulty – the usual problem of a million varieties of lights and none of them actually what I wanted (of course, the possibility exists that I’m just too fussy)).
It’s never a simple operation to put lights on the tree post-decoration, but with a bit of contortionism I think I managed an ok job of it.  Of course, I should have waited until dark to take the photo, but the solstice approaches, so dark isn’t happening until pretty late at night these days, and I’m too impatient 😉
The woman in Make Cafe who served us asked if Harvestbird and I were sisters.  We decided that was quite acceptable (what’s that saying about brothers from another mother?)

A couple of days ago, two scrub fires broke out in the Port Hills.  Since then, despite the best efforts of fire fighters (and the death of a helicopter pilot who had been one of many dumping water from monsoon buckets) the fires have continued to spread, and the cloud of smoke over the hills…

Ok, now it’s officially summer.  Not because it was Brother’s birthday (and therefore the first day of summer) on Friday.  Not because it’s been stinking hot the last two days.  But because I went to the supermarket this morning, and guess what they had? Raspberries!!! Yay!!!! They were stupidly expensive, but who cares, the first…

igns are abounding that Christmas is on its way. I already have six different Christmas/end-of-year parties in my calendar (sounds like I have a really impressive social life, but the majority are work-related), and plans are being made in our corridor at work for the annual door-decorating competition (which, of course, our office won last…

From my travel journal: Saturday 17 November 2012, 7.30 am: In a cafe somewhere in Canberra (I don’t know, I went for a walk, so I could be anywhere…) I really should have started writing this up last night, but sleep was more urgent.  It was a very long day yesterday.  Started at 3.30 am…

I’ve been using a couple of random bits of fabric and batting as a practice quilt sandwich, for checking tension and trying out new quilting patterns before I actually start quilting something. I’d completely filled up the piece with stitching, so I was about to throw it out and replace it with some new scraps,…