A couple more FMQ squares for my experimental quilt (at this rate, winter will be over before I get it finished…): 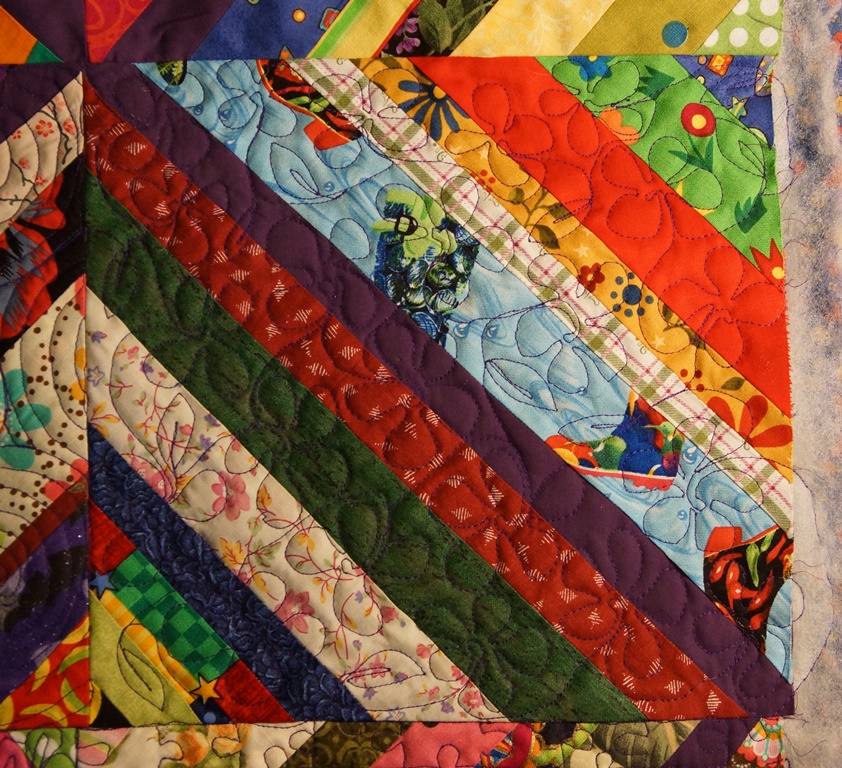 This pattern is called Happy Blossoms, and it was a nice fun one to sew (even if I got confused on a few of the flowers) – it flows quite nicely. 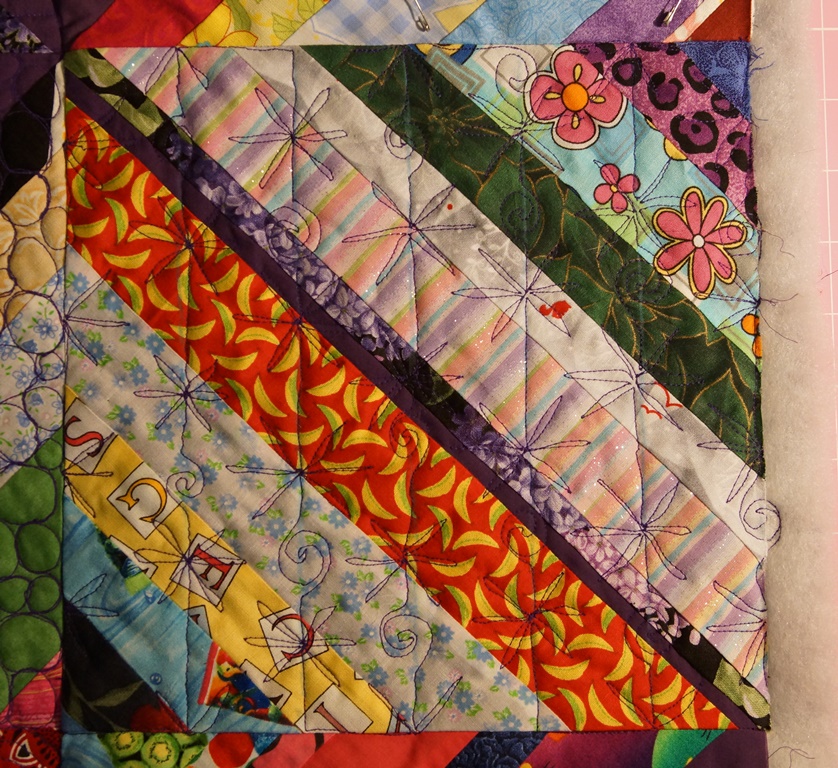 And this is The Snowflake, another pattern that’s greatly helped by drawing chalk guidelines (just ignore the few wee places where I veered totally off the lines).  The snowballs were supposed to be randomly placed, but apparently I’m not very good at doing random, because I seem to have ended up with diagonal rows of them.
Other than that, and a bit of working on a wee secret project for an upcoming birthday party, I’ve had a very lazy weekend.  Last weekend was so full-on (as well as the Oamaru trip, I went to Alex’s farewell lunch on the Monday), and then work is still reasonably stressful while we wait for a decision on our future, that I pretty much ran out of go this weekend, and spent a lot of time vaguely mucking around on the internet and watching youtube videos.  Not the most constructive way to use my time, but sometimes necessary.

On Friday afternoon a few of us from work went to visit the Whole House Reuse exhibition at the museum.  Whole House Reuse is an amazing project – they took a redzone house that was scheduled for demolition, and salvaged as much of the material as possible (it was supposed to be all of the material, hence “whole house”, but they found asbestos in the insulation, so had to dispose of that), then asked artists and craftspeople to find ways to reuse the material in creative ways.  The idea being to show just how much material that normally ends up in landfill when a house is demolished is actually still useful.
We worked with the Whole House Reuse team at the beginning of the project to archive their catalogue of all the materials recovered from the house, so we were really keen to see the exhibition of works created from the material.  There’s some really amazing stuff, everything from a whole new building (a 10 square metre “tiny house”) down to jewellery.  There’s some incredibly imaginative uses of material, too, like light-switch casings turned into picture frames.  Hopefully we’ll be getting pictures and documentation from all of the artists to add to the collection in CEISMIC.  There’s going to be an auction at the end of the exhibition, and I’m very tempted to attempt to buy one of the smaller pieces for myself.  They may all end up being way out of my price range, but I’d love to have a part of such a cool project.
After the museum closed, I met up with Lytteltonwitch and we went over to The Commons for dinner.  The food trucks that were at the Square every Friday night over the summer are at The Commons one Friday a month over winter.  It was very cold, and the ground was pretty wet after the rain, so you had to be careful dodging puddles in the dark, but there was a great atmosphere and loads of exciting options for food.  Jan was there with her pop-up tearooms, doing bacon butties and puddings, so of course we had to sample both, and then we were tempted by several of the other stalls, so ended up eating way too much (and I still didn’t get to sample half the things I’d have liked to – I think I would have exploded if I’d eaten anything else, though).
I got to try out the new bus exchange on the way home (only half of it is open, but it’s the half my bus leaves from) – a huge improvement on the temporary one, if only because you get to wait for your bus inside and sheltered from the weather.  It seems a lot nicer than the old one, too, though that might just be because it’s new.  But it felt a lot more welcoming to me, and safer, too (though I’m not sure what exactly was making me feel that).  Nice to finally see one of the many promised anchor projects finally open, anyway.

Remember this? I’d started making a wee lap quilt back in August, but put it aside when I got busy with other projects, and the squares have been sitting in a pile on my desk ever since waiting for inspiration to strike.  With all of my Christmas projects out of the way, and wanting something…

ytteltonwitch and I had planned on going out somewhere nice for dinner tonight to celebrate her new job.  Some might say we failed at that, given that we ended up eating from a food truck, but I reckon we had a lot more fun than we would have had in a fancy restaurant 🙂 Our…

And the DD site has been down for days, so I couldn’t post anything. And of course I wasn’t so sensible as to just write my entries up in Notepad and copy and paste them in, so I’m sure I’ll forget some of the really cool and important stuff I was going to tell you…