I think I’ve decided on a layout.  But then, I thought I’d decided on a layout an hour ago, until I took a photo of it to use as a reference, and it looked completely different in the photo than it had on the floor (probably because it fills so much of the floor that it’s hard to find somewhere to stand to get a decent view of the whole thing), so I had to swap a few birds around, take another photo, swap a few more… but I think this is it.  The final layout decided: 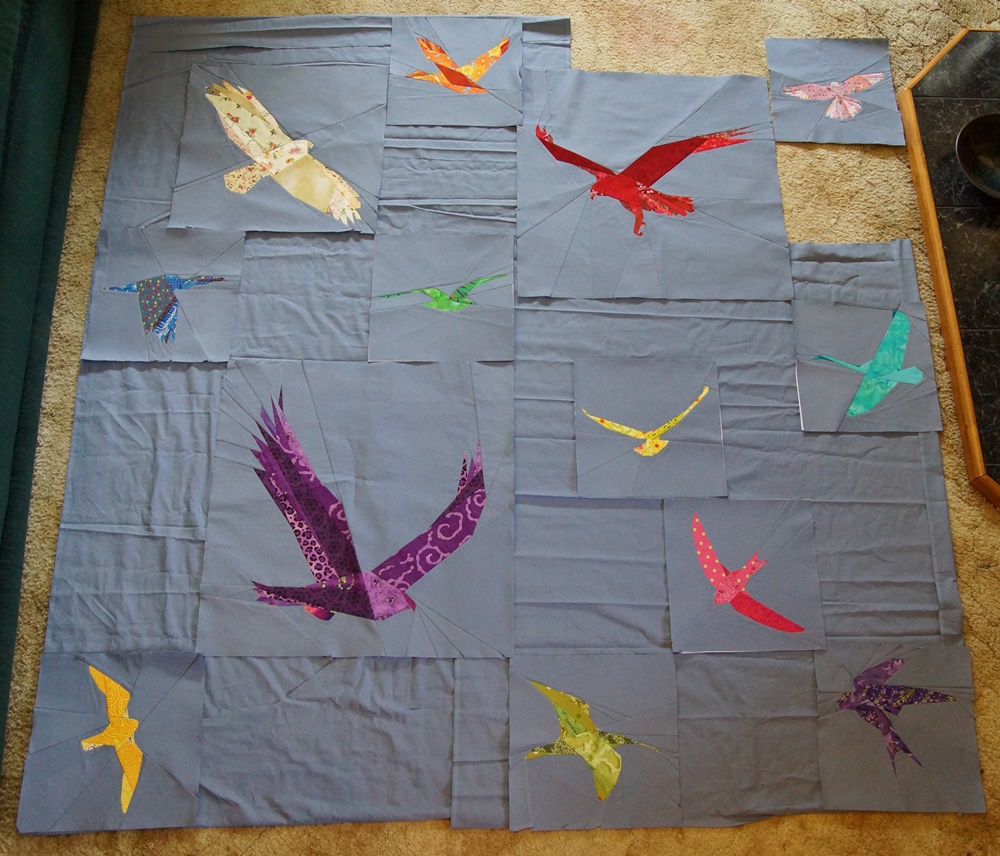 I didn’t have quite enough of the blue fabric left to provide a background for the whole thing (though I will once I cut it up into the appropriate-sized strips), but you get the general idea.
I based it on Tartankiwi’s layout for a 72 inch square quilt (!!! That’s 1.8m!!! How on earth am I ever going to manage to quilt something that big?!?), which relies on a 12 inch grid, but because I’d added in the extra seagull I wanted to break the symmetry a bit more so that it wasn’t so obvious that there was an odd number of birds (which is also why I made the buzzard 18 inch instead of 12 or 24 like the other birds).  So I’ve used a 6 inch grid so I could shift a few birds over by half a block and make the grid a little less obvious, but still keep a simple enough structure that measuring the background blocks and sewing them together with the birds won’t be too complicated (I’ve got a sewing diagram all mapped out for myself on graph paper, and I think it makes sense).
Now I’ve just got to figure out how I’m going to accurately cut rectangles of fabric that are 24 1/2 inches wide (i24 inches with a 1/4 inch seam allowance on each side) when my cutting mat is only 24 inches wide…

Those of you who know me in real life (TM) will know that for the past year or two I’ve been muttering about how one day I’m going to suddenly cut off all my hair.  Well, one day arrived… Yeah, bit of a drastic change 🙂 (Although in photos it doesn’t really look all that…

My overly-ambitious attempt at a harder paper-piecing pattern actually turned out pretty well. Can you tell what it is yet? All those bits put together. The final product. I still haven’t decided what to do with the heart I made the other day, but I knew what this one would be before I started. Making…

Finally finished the backstitch and beading on the dragon: Now I’ve just got to find somewhere to get it framed, seeing as my favourite framer is gone. Or maybe I’ll just add it to the ever-growing stash of things to round to framing one day… Now, what should I do next?