hile I was in the midst of studying, every time I got invited to do anything my response would be “I’ll be free in November” – with the result that my social calendar is full to overflowing this month.  Last weekend was the Auckland Uncon, of course (which I promise to write a proper blog post about sometime, but I haven’t had time to go through all my photos yet), and then this weekend I went to a “French chic” furniture-painting class with a Toastmasters friend.
I had very little idea of what the class would involve (or even whether anything described as “French chic” would at all suit my own personal taste), but I found an old table on trademe that I thought I might be able to turn into something useable, but was cheap enough that I didn’t care if I ruined it, and Mum sent me up an old wooden tray/box thing that she was tired of, so armed with those two potential projects (and my camera, of course), I headed off to Leeston.
I forgot to take proper ‘before’ shots, but here’s the side table just before I started to paint, 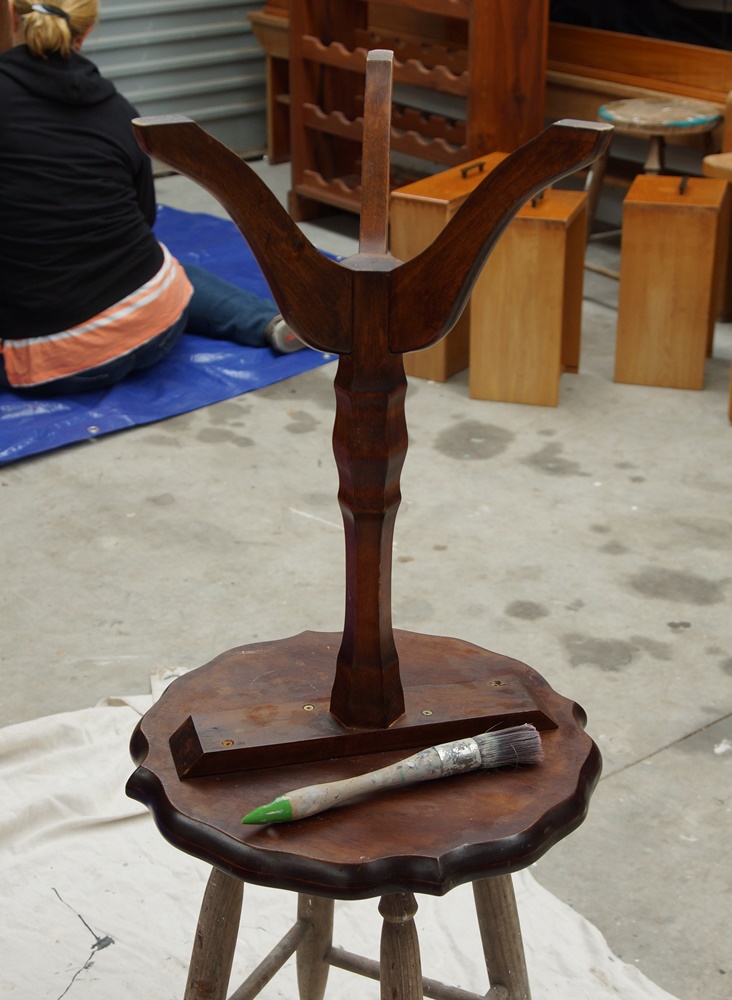 and the tray after sanding and wood-filler, part-way through its first coat: 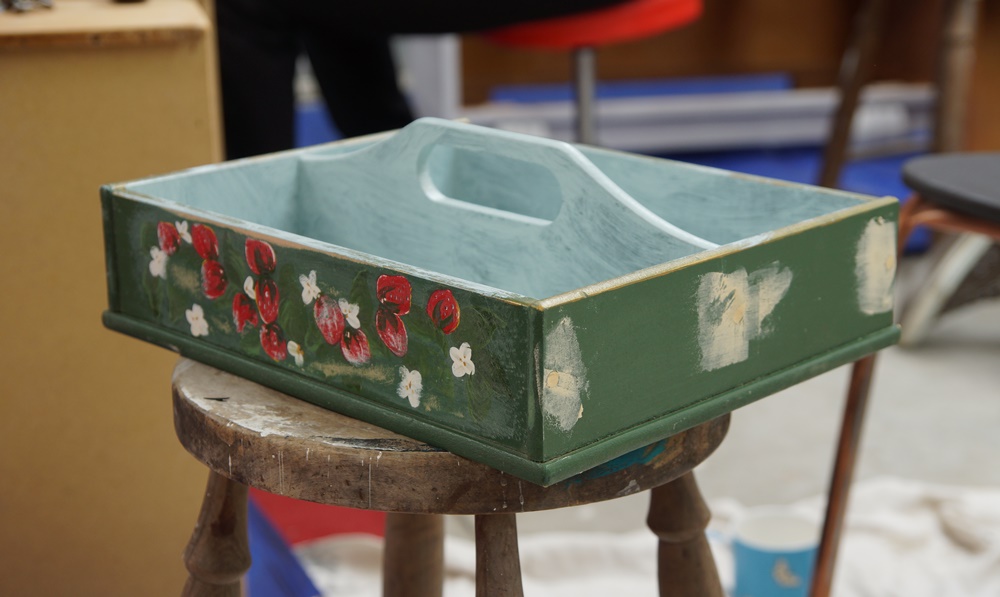 And here’s the table after its first coat of paint. Not looking too impressive yet. 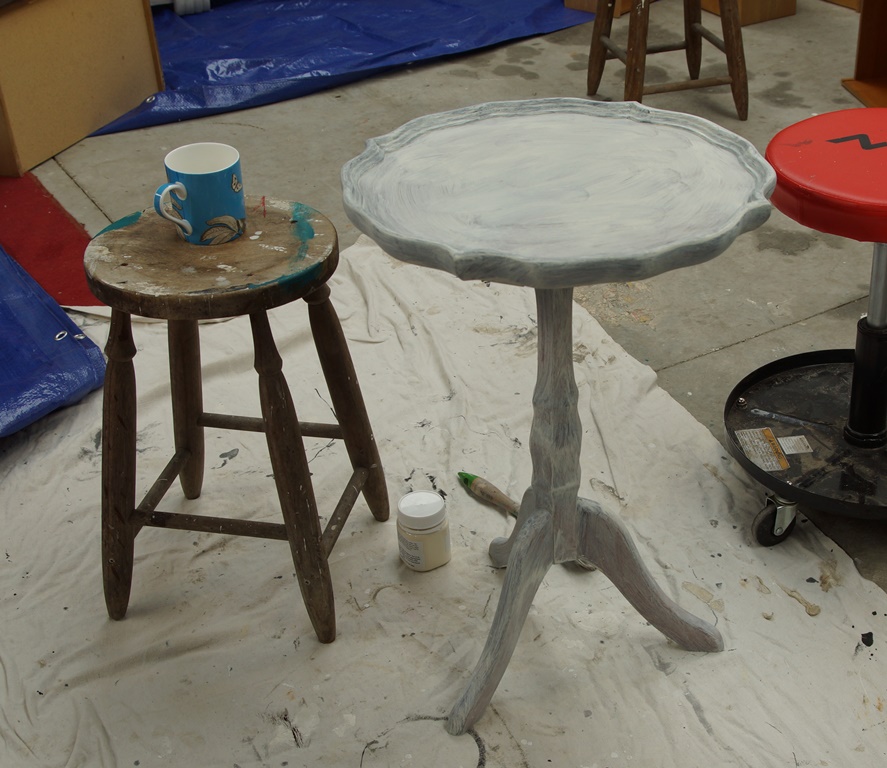 Slightly better after a second coat: 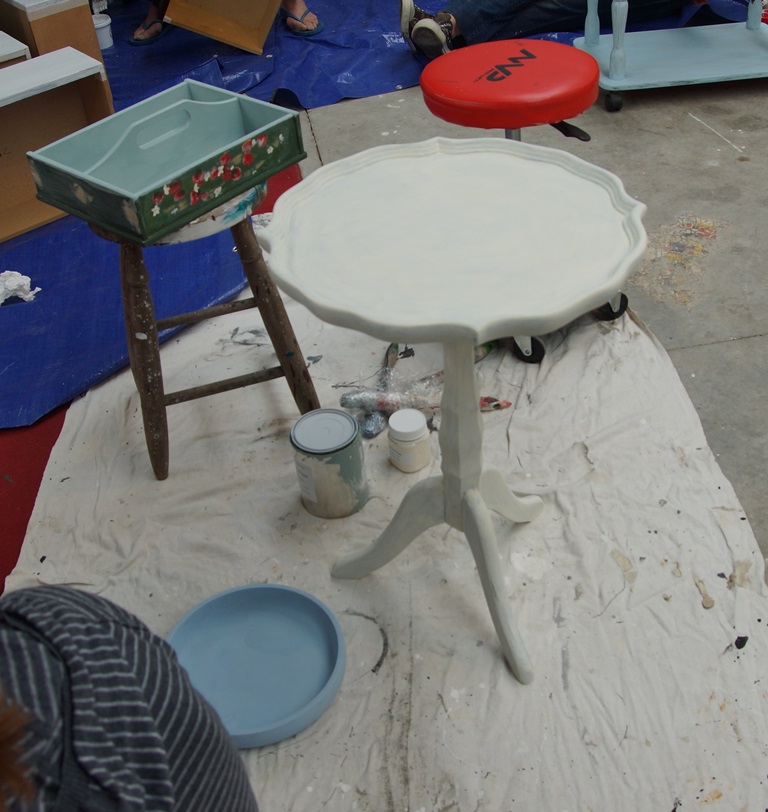 The tray still only has its interior painted, because I was still waiting for the filler to dry properly. Because my two projects were so small, I had a lot more waiting for paint to dry than most of the others in the class, who were doing big pieces of furniture so by the time they’d done a coat on one piece, the other would have dried. So the tutor gave me another project – a wooden bowl she’d picked up at a garage sale for a couple of dollars. Again, I didn’t take a before photo, but you can see it sitting on the ground in the above picture, after a couple of coats of blue paint.
The tutor suggested I ‘distress’ the edges a bit (in other words sand back the paint slightly), then try one of her collection of stencils on it.  My choices were pretty limited, because it had to be able to fit inside the bowl, and most of her stencils were on huge sheets, but we eventually found a small enough one: 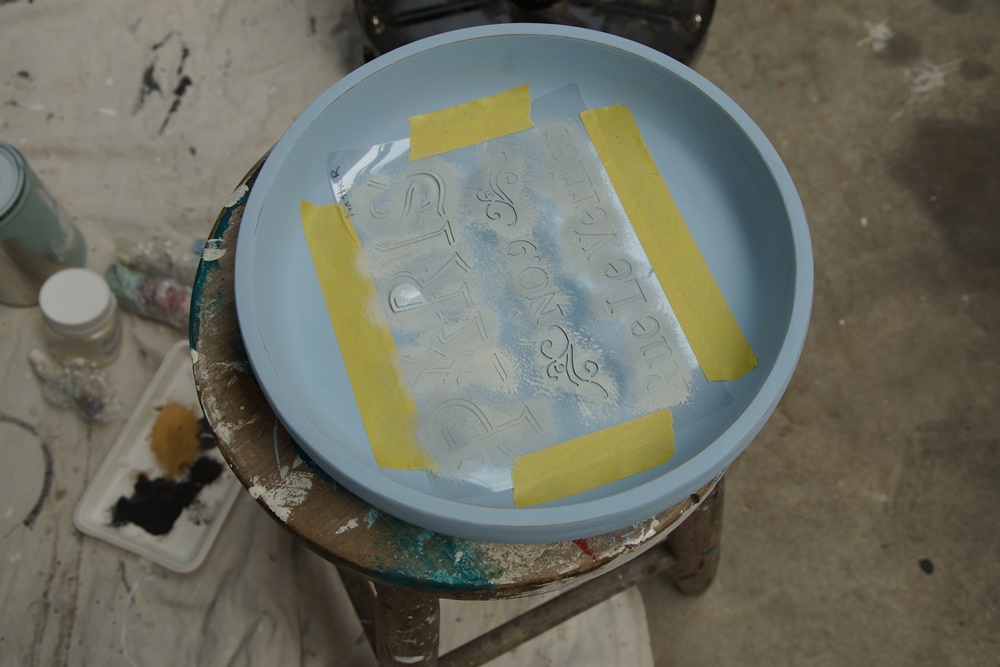 It wasn’t the design I would have picked myself, but the end result turned out not bad (the shading effect was completely accidental, due to the paint tray I was using having some old black paint on it that bled into the white I was using, but I liked the effect, so left it as it was): 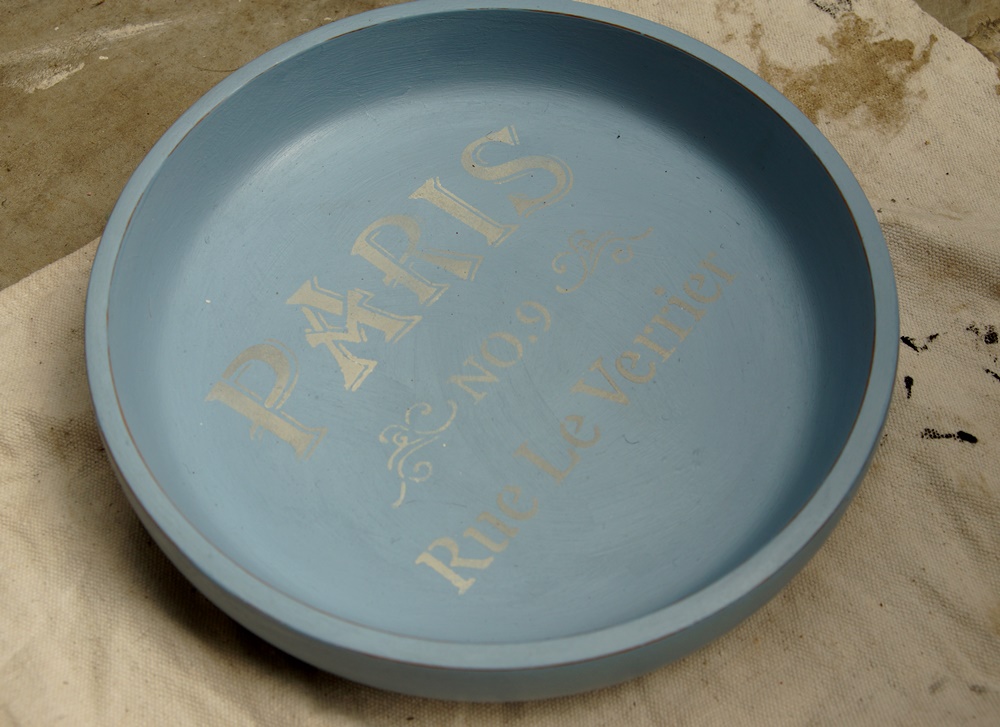 Now that I was such an expert stenciller (well, as long as you don’t look *too* closely at the edges…) I decided to have a go on the tray as well. Again, my choices were limited by size, and because the tray had a lip around the bottom that the stiff stencils couldn’t bend past, so I could only choose designs that were right on the edge of the sheets. 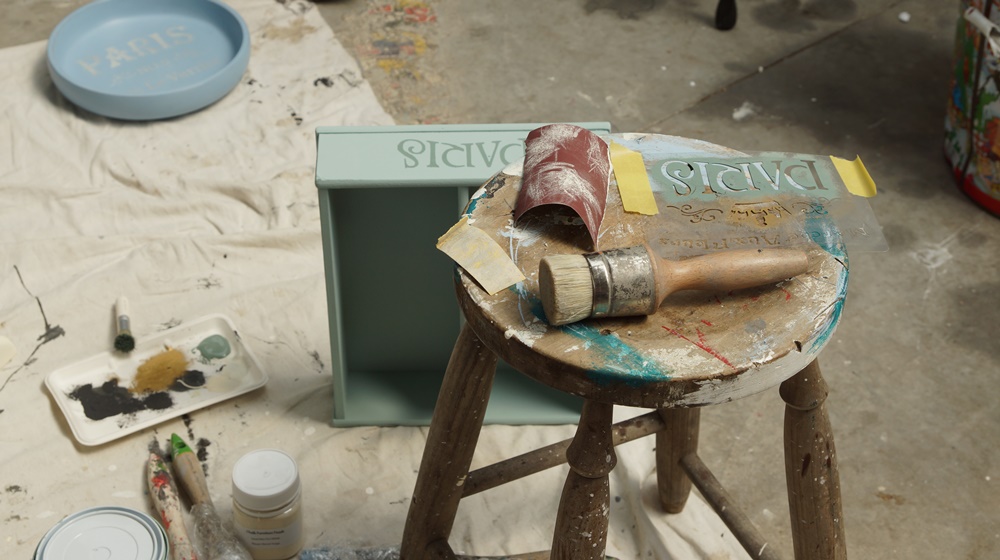 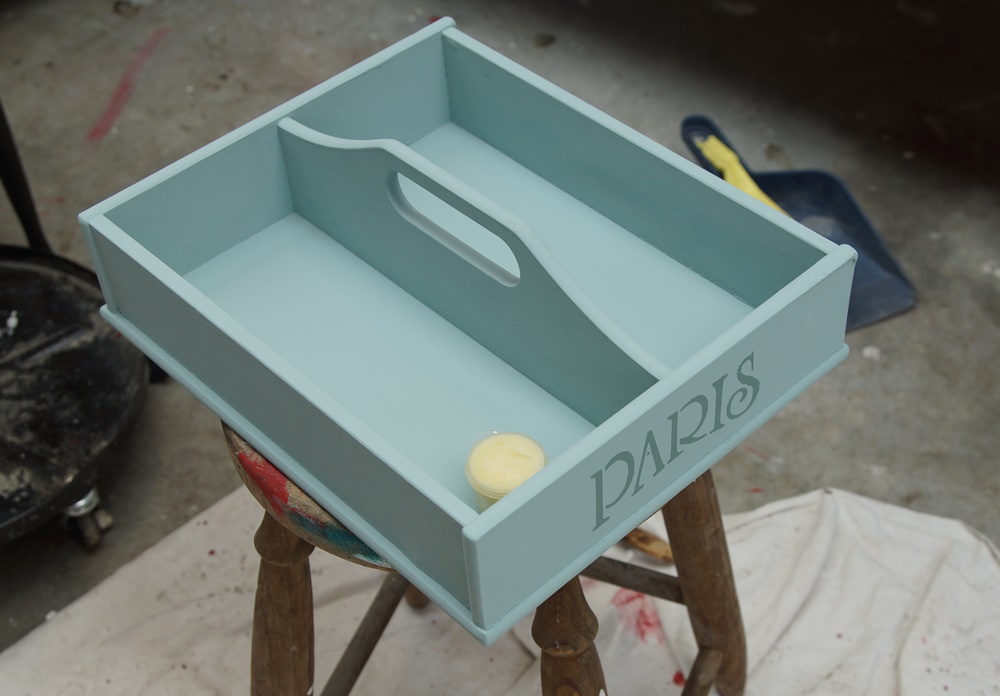 I would have liked to have tried out a few other things on the tray, but I was running short of time by now, and I really wanted to back to finishing off my table, so I decided to leave it at that. I do still need to wax it though (which is what seals the water-based paint) – I’ll do that sometime over the next few weekends, whenever I find one of those mythical spare moments everyone keeps talking about…
With the table I had a totally flat surface, so I could finally use one of the stencils that were more to my taste. It took me forever to get it exactly centred though! The tutor gave me some gold “rub and buff” to highlight the edges before I waxed the table, and I reckon it turned out pretty well: 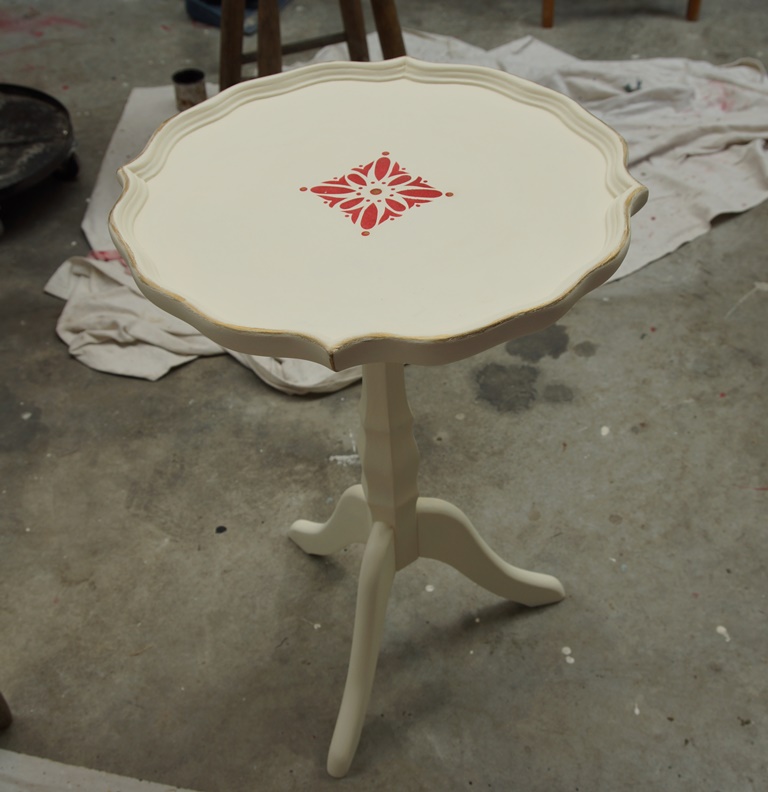 And here it is in situ. I didn’t actually plan for it to match my armchair (in fact, I’d intended to put it in the sunroom, not the lounge), but it does perfectly! 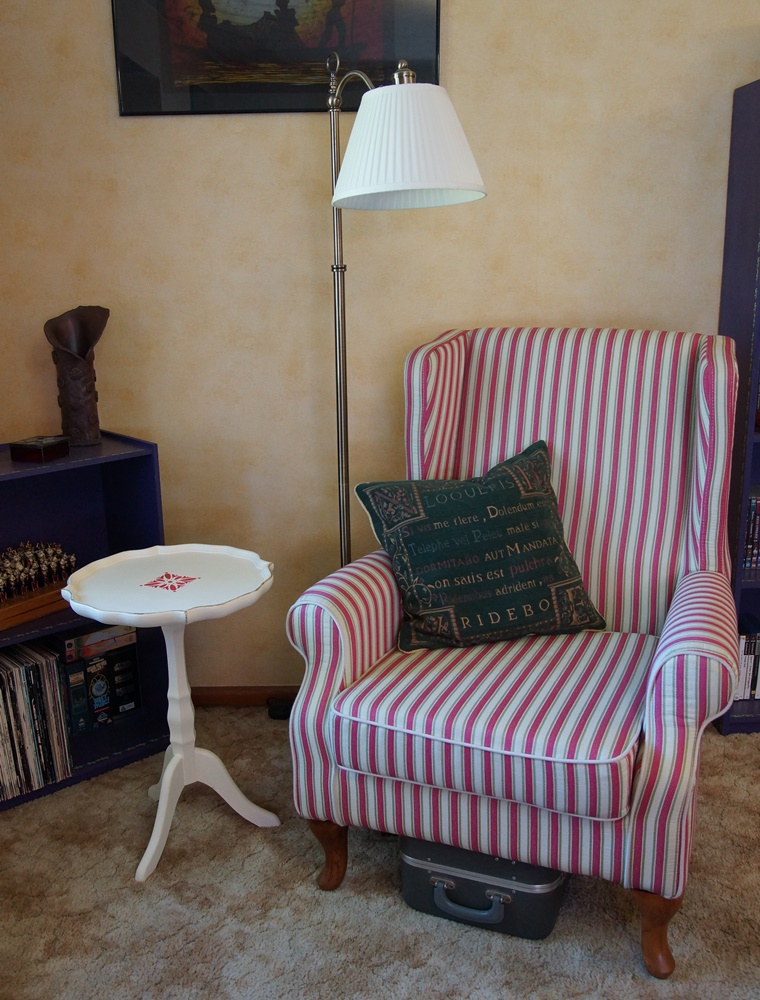 And a few more photos to show you what everyone else in the class was working on: 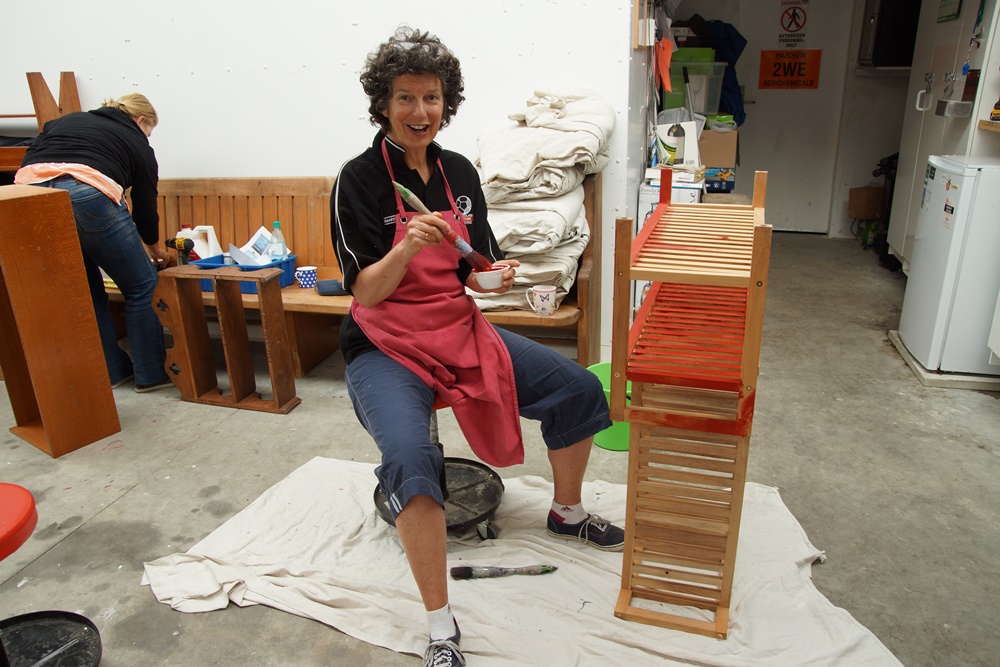 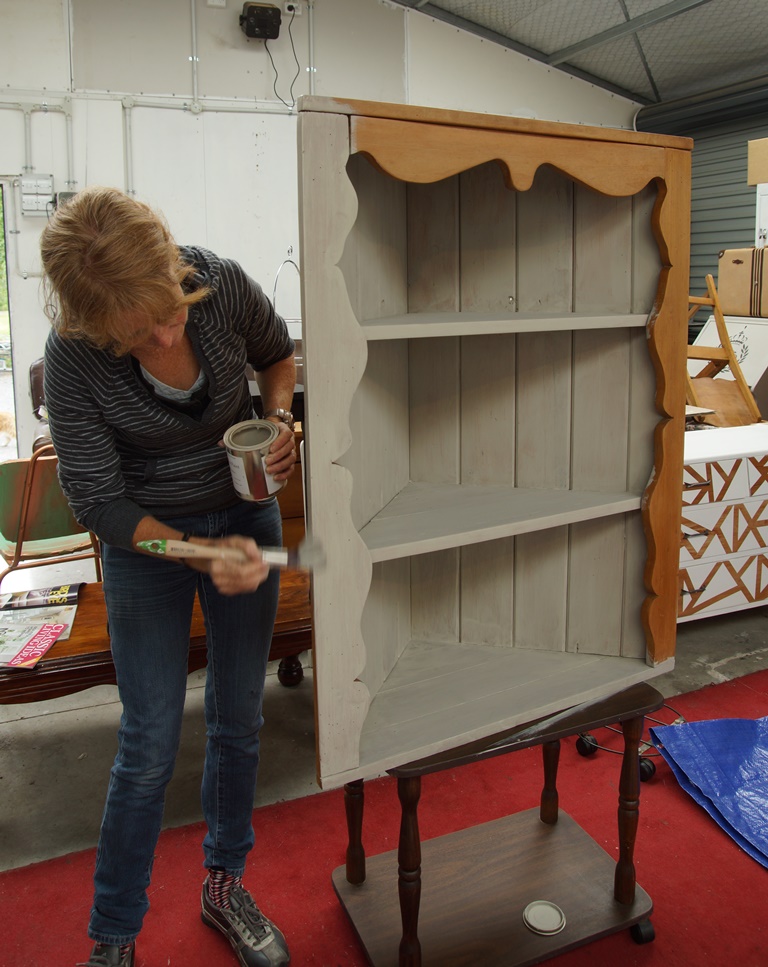 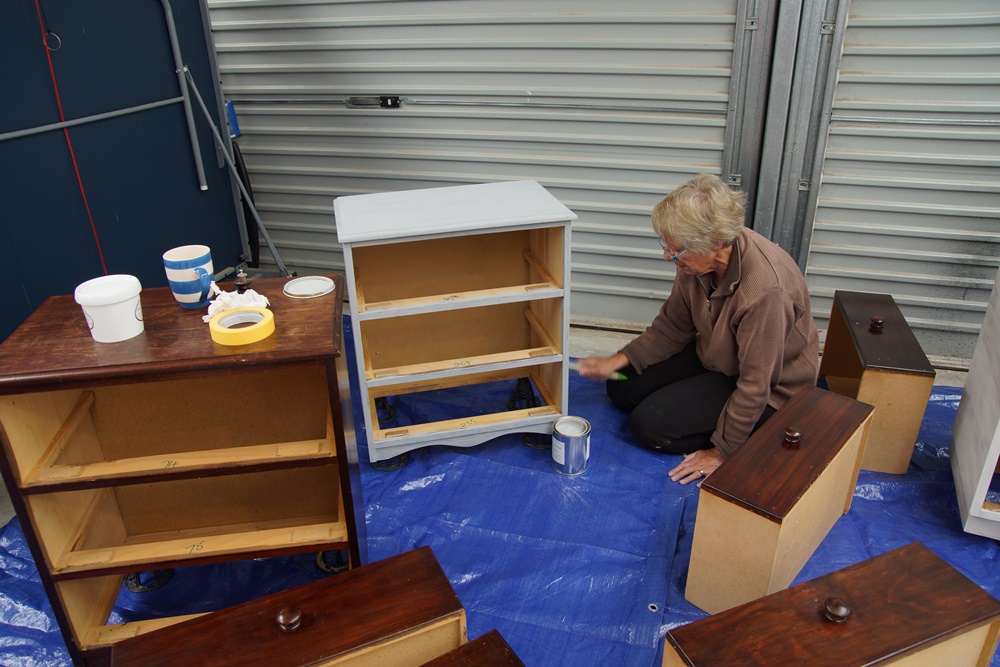 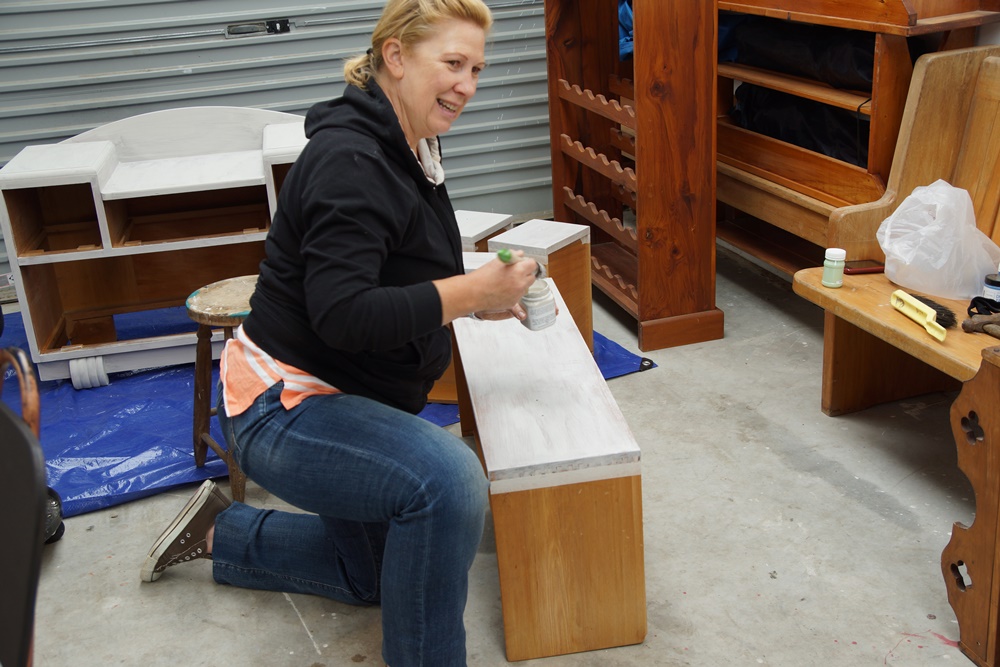 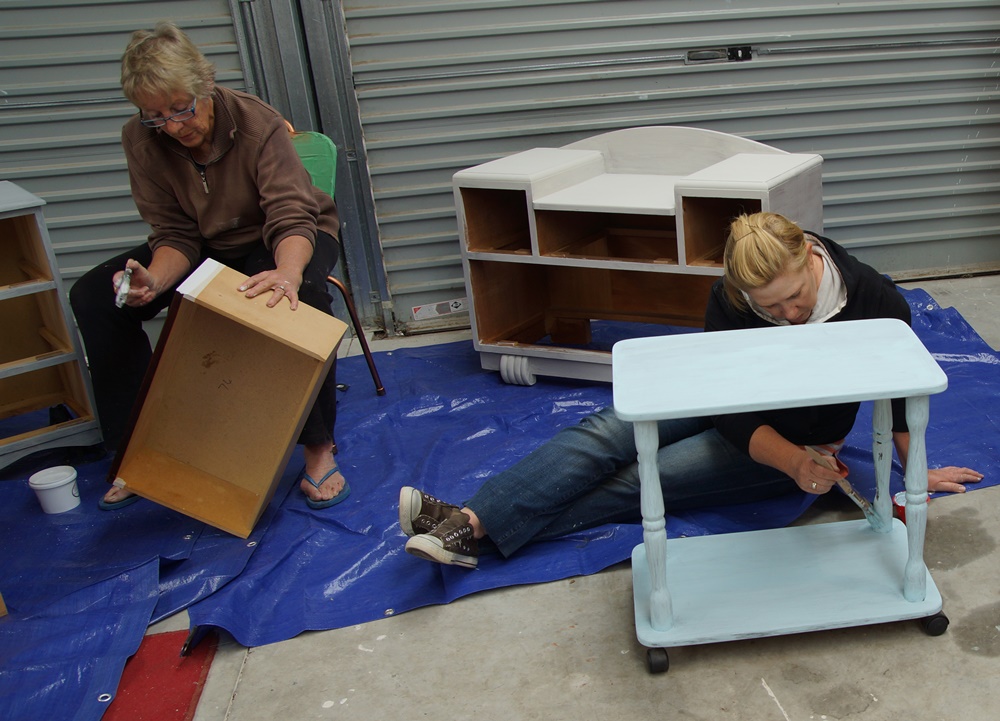 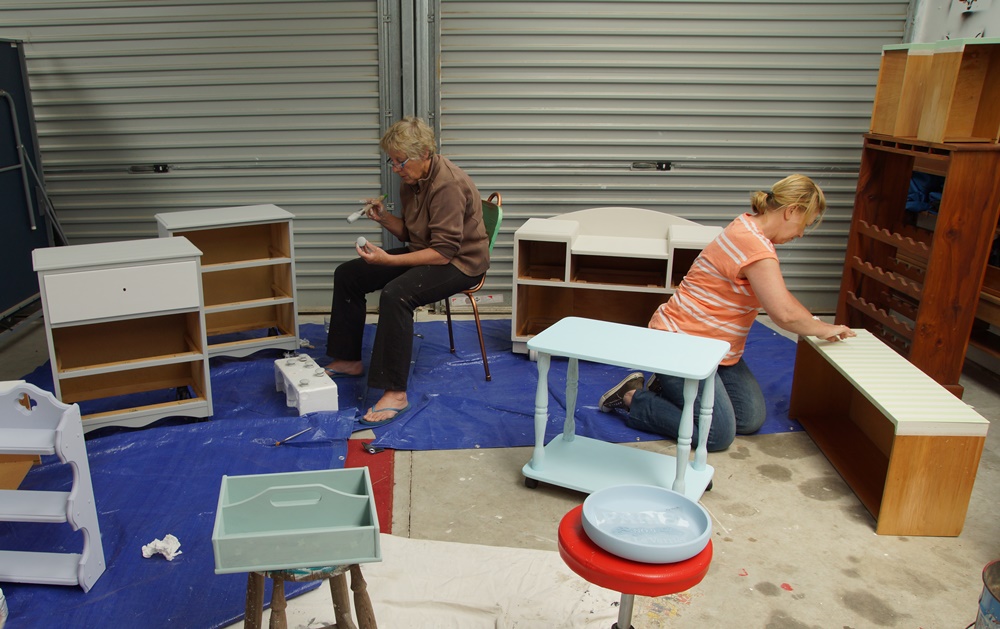 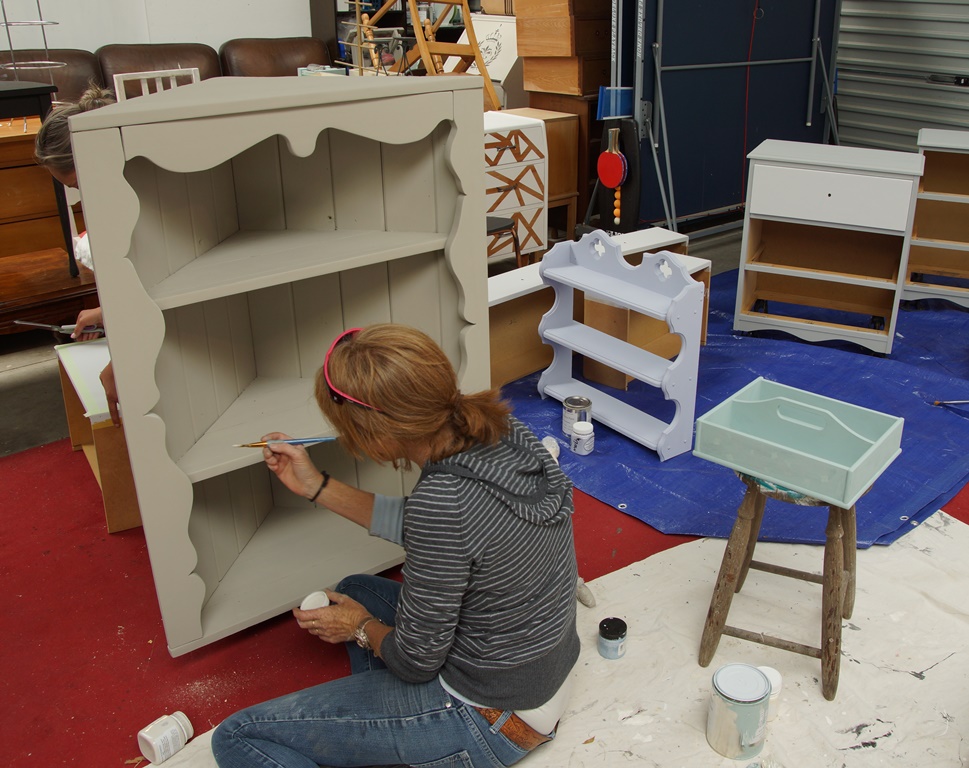 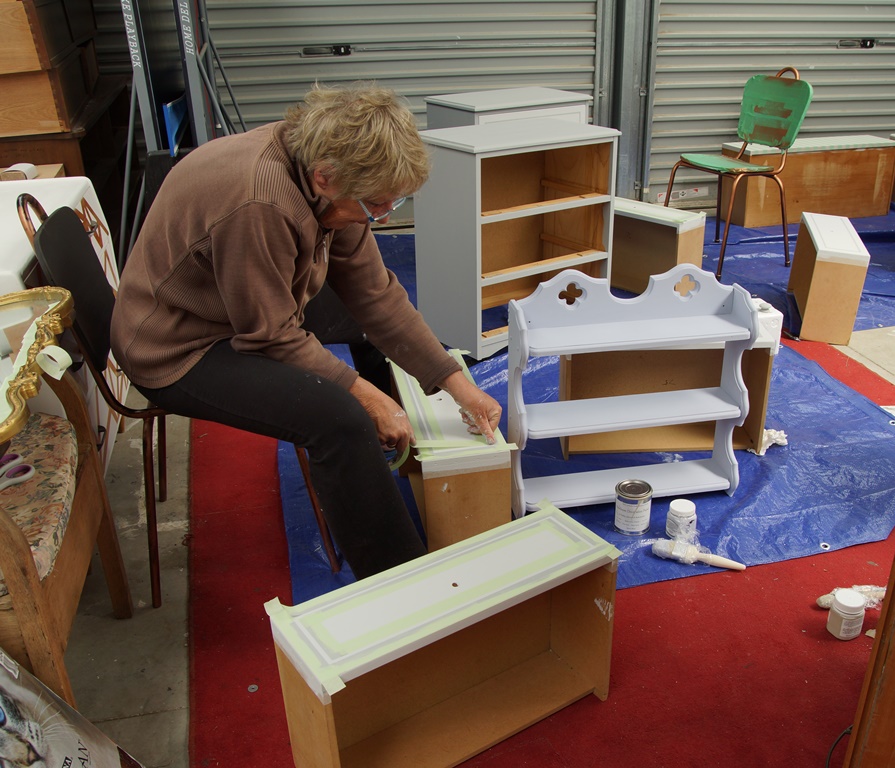 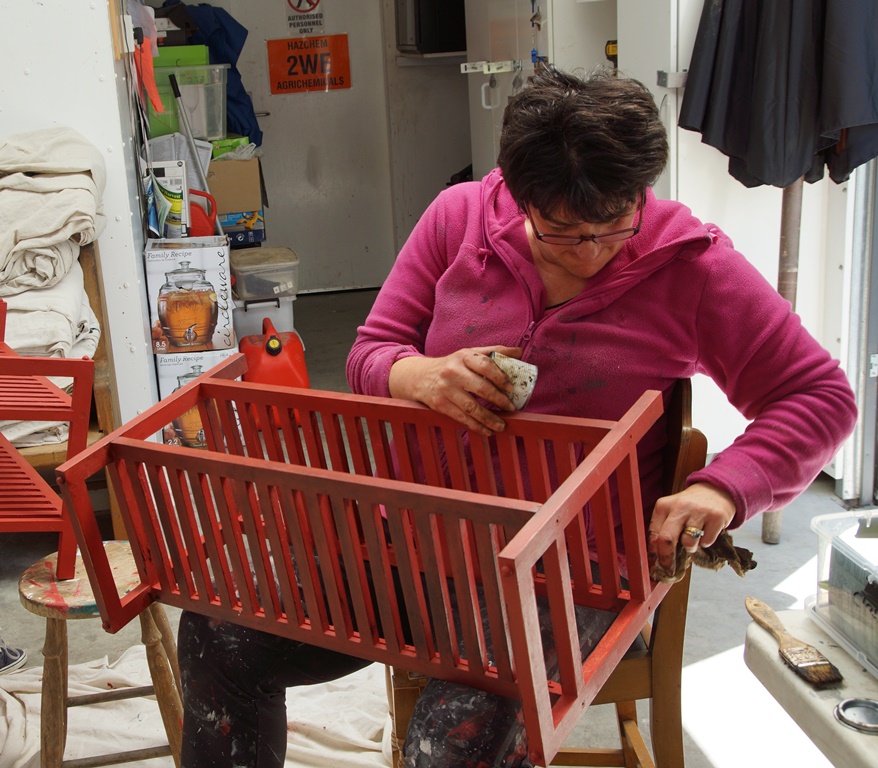 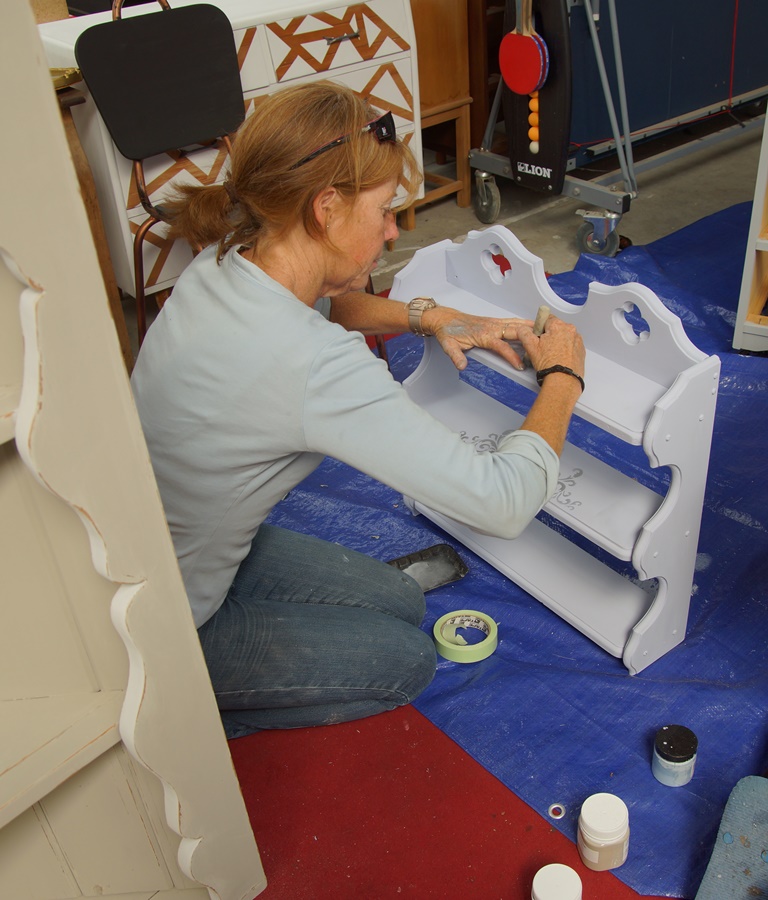 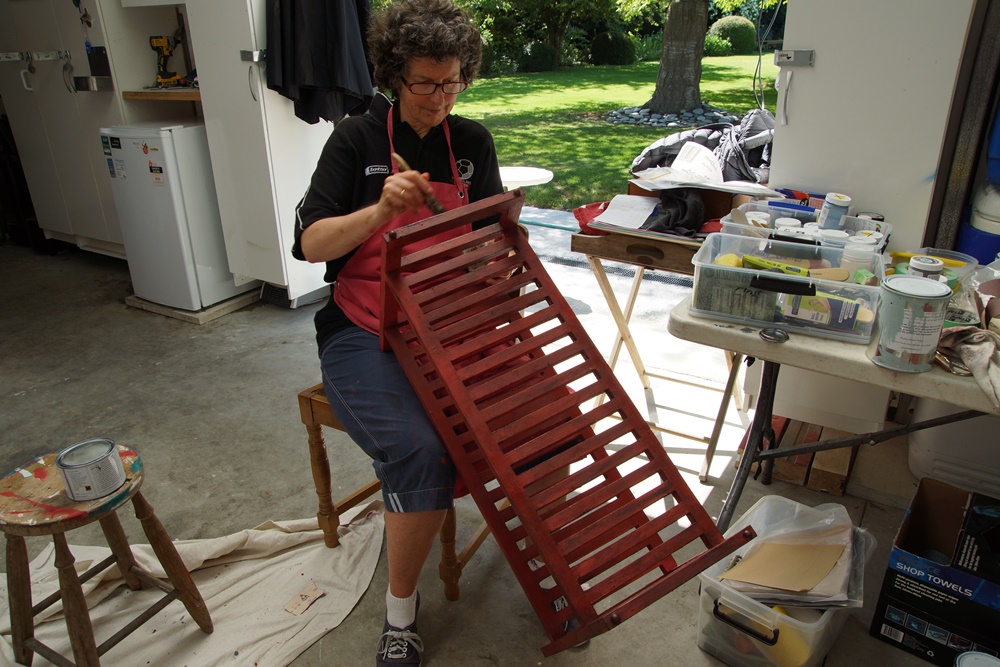 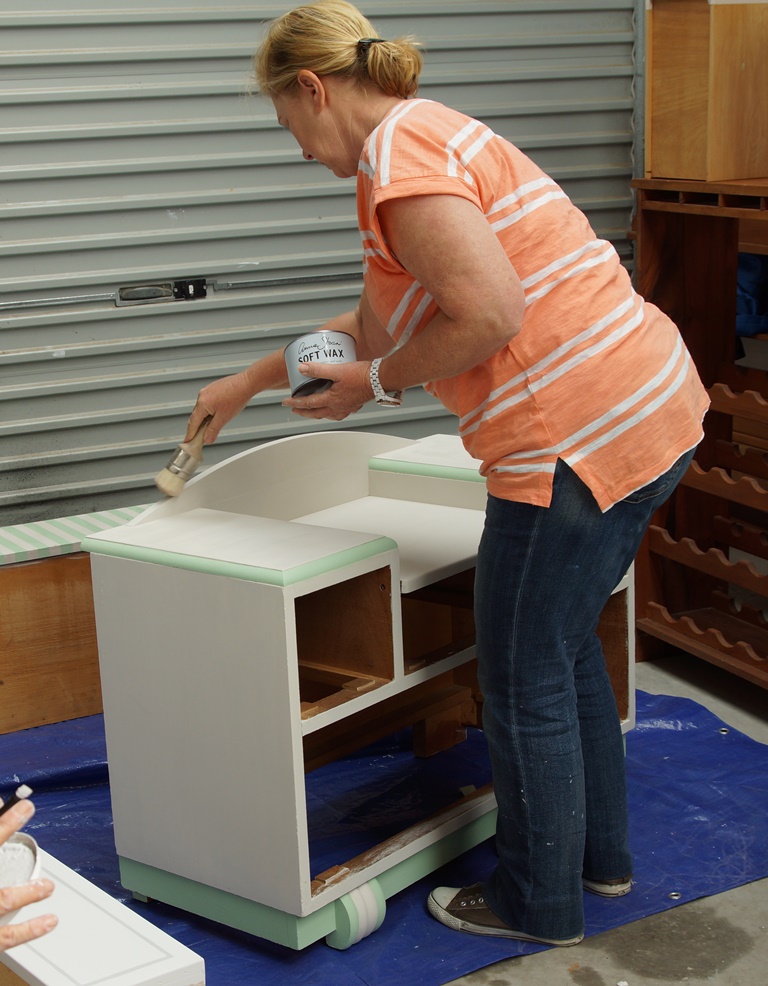 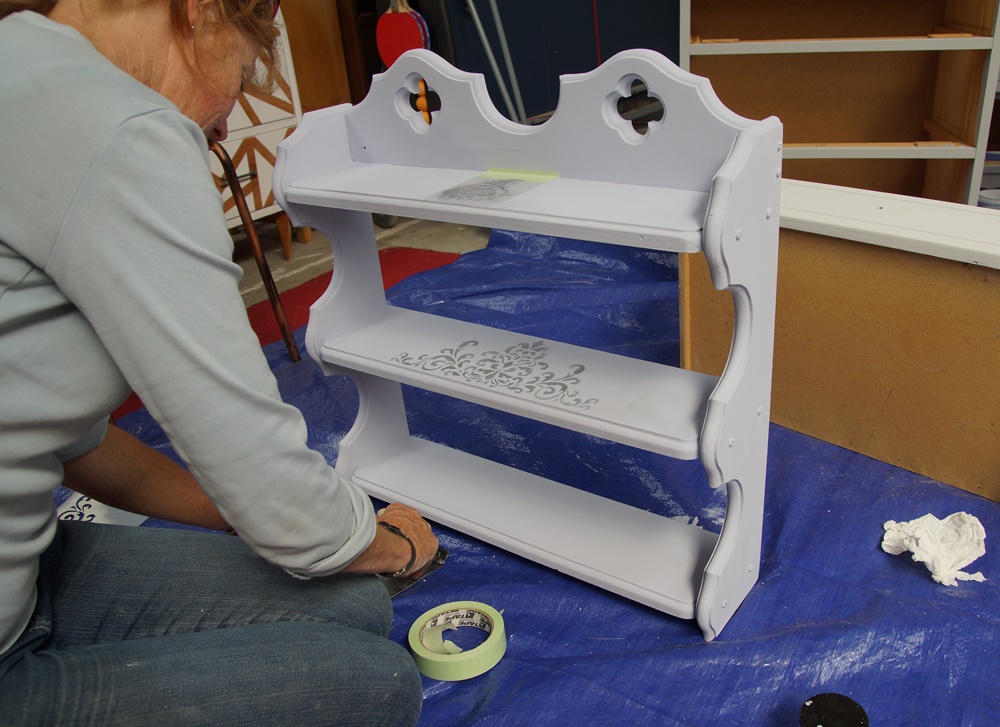 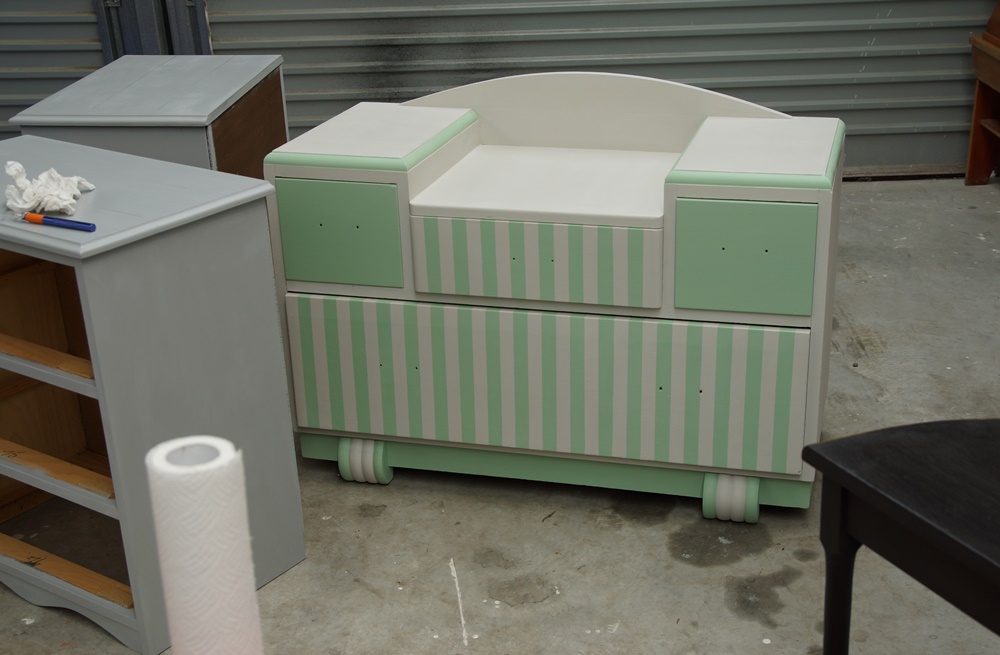 After I got home from the furniture painting, I had time for a quick shower to scrub the paint off myself, then I was back out again, for dinner with Harvestbird.  She’s taken on a new high-level role at work that’s been keeping her incredibly busy, so between the packed schedules of the two of us we haven’t been able to manage our regular lunches lately.  So dinner, followed by a nice long wander around town in search of late-night cake, was a welcome chance to catch up, and a lot of fun.
However, by Sunday I was totally socialled-out for the weekend, so I passed on going to the bookcrossing meetup (a pity, because Lytteltonwitch emailed me later to say that it was a really good one, with lots of people turning up), and instead spent the day cleaning the house (which it seriously needed, having not been home last weekend to do it), and playing around with my Christmas stars project a bit more: 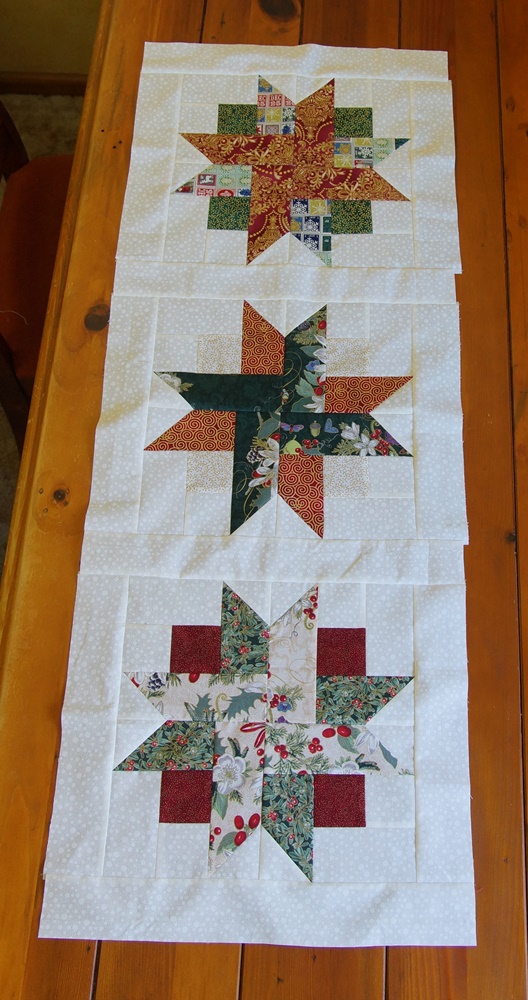 I’m not 100% happy with my fabric choices on the star furthest from the camera (I used up the fabric I’d wanted to use on my first attempt that went wonky), but the overall effect is not too bad. If it looks ok once I quilt it, it might even make a good Christmas present for someone. Assuming I find some of that mythical free time between now and Christmas… I already have five Christmas party invitations in my diary, and it’s not even December yet.

Yep, I’m back in Wellington again, for another conference. A bit different than the last one though – this time it’s the National Digital Forum, a conference/gathering for people on the technical side of the GLAM (Galleries, Libraries, Archives and Museums) sector. Somehow I don’t think we’ll be decorating our name tags with glitter and…

ot that I’d ever complain, but we get a ridiculous amount of annual leave.  Five weeks a year, plus an extra four days at Christmas (on top of the statutory holidays), and another day at Easter.  So effectively six weeks of holiday a year.  Which is seriously cool, but also sometimes difficult to actually use…