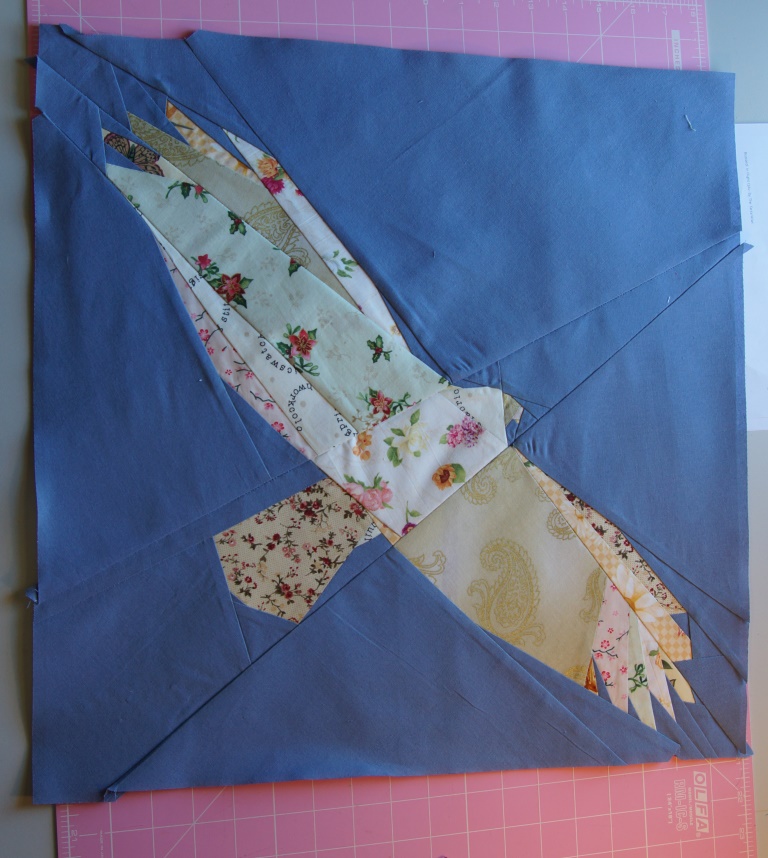 (Yes, the picture is sideways – I took the photo this morning, but didn’t realise until now that I’d put the block up the wrong way. So rather than try and re-photograph it in the less than ideal light now, I just rotated the photo, even though it looks weird 🙂 )
Anyway, Buzzard done.  I’d hoped to have made some progress on the next bird, but I woke up this morning with a horrible cold (I’m not surprised, really – I’ve been running around like a mad thing for the last few weeks, so I knew I’d inevitably end up crashing at some point), so instead I’ve spent most of the day sleeping.  Plus I ran out of washi tape, which I was using to tape the pattern pieces together (because for these big birds, the pieces don’t fit on a single A4 page for printing, so you have to print them across multiple pages and then stick them together), because washi tape doesn’t melt when you iron over it like sellotape does.  So I can’t make much more progress until I can get to the craft shop and buy some more.  And normally I would have just walked down to Hands, but see above re: sick.
I’m pretty pleased with the buzzard though, despite being in a bit of a dozy state while sewing the last couple of seams.  Tartankiwi gave me a few handy hints on getting those tricky seams to line up when they just won’t cooperate (for instance, she said sometimes all it takes is ironing the seam open instead of to the side to just shift everything over a wee bit and line it up – sounds unlikely, but it works!  I tried it on the recalcitrant kestrel, and it’s looking much better now).
Right, I’m off to bed with a disprin and a book to try and get well.  I suspect I’ll be taking a sick day tomorrow anyway though 🙁

I just got back from spending two hours at the emergency clinic, having managed to cut a lovely big slice into my finger.  The culprit was my lovely rotary fabric cutter, which I was enthusiastically wielding while starting a new sewing project, when a moment’s inattention meant that my little finger on the hand that…

Most important thing:  I finished the Lego quilt last weekend, and Lytteltonwitch delivered it to her friend, who apparently loved it.  I was pretty pleased with the finished product too: The invisible thread, even though it was a bit of a pain to work with, worked out really well, giving texture to the blocks without…

Only three months to go until my thesis submission deadline, so it’s very much nose to the grindstone around here.  I’m making exciting progress though – one of my data sets is complete and I’ve almost managed to construct a statistical model to describe it, and the other data set is almost ready (“almost” being…

ery weird dream last night. I was walking with a group of people (no idea who, but it seemed very important to me that I impress them). They were talking about how wooden spoons are made, and that it’s necessary to heat-temper the wood that’s used to make them (yes, I know that makes no…