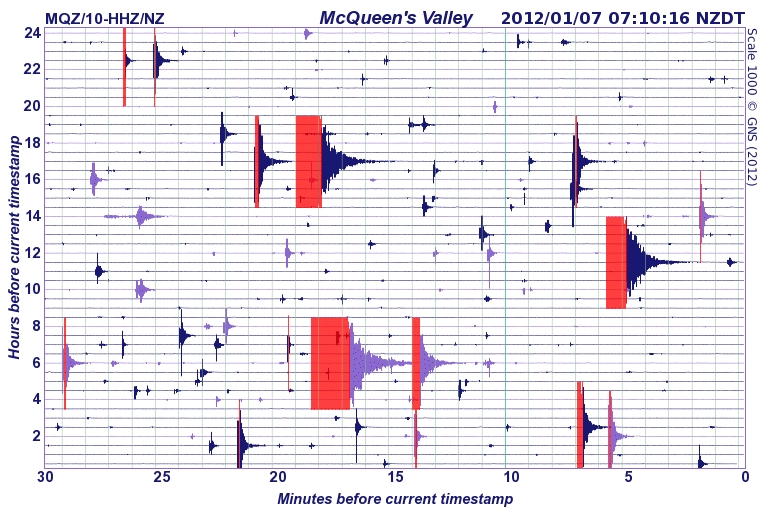 The red lines on the seismograph are where they’ve cropped the trace so that it doesn’t totally obscure the rest of the graph. Most of them are 3s, which we don’t really feel over this side of town (the epicentres are in the east of the city or just off the coast), but the three wide red bars we certainly felt: a 5.0 mid-afternoon (amusingly, during a council briefing from geologists, who had just said that there was a 50% chance of another magnitude 5 aftershock… and then there was 🙂 (I was watching via live-stream, and there’s something really weird about watching people on a video reacting to an earthquake you’re feeling at the same time – yeah, I know that’s what “live” means, but it’s still odd)), then a 4.7 in the evening, and a 5.2 in the early hours of this morning. None of them really big enough to be disturbing (how easily we get used to things – 16 months ago I would have said they were huge and scary, now they’re just ho hum), but definitely noticeable!
From what I understand of the geology (we’re all becoming experts in Christchurch), each significant shake releases the stress from one area of fault, but changes the overall pattern of stress across the surrounding faults (and Canterbury, it’s now known, is criss-crossed with fault lines), making them more likely to rupture. The trend has been a gradual movement towards the east, with the latest quakes all being just off-shore in Pegasus Bay (the big sweep of bay that Christchurch sits at one end of). Apparently Pegasus Bay has an even more complex network of faultlines than there is inland, hence lots of aftershocks. The good news though is that almost all the faultlines in the bay are relatively short (and it’s mostly the length of the faultline that determines how big an earthquake will be – which is logical, if you think about it: a long faultline gives lots of room for the ground to move, but a short one only lets it jiggle a bit), so it’s likely these 5s are as big as they’re going to get. There is still a remote chance that several faultlines will connect up and allow a bigger movement, and there is one bigger fault a bit further up the coast that could conceivably be triggered, but the geologists don’t seem to think either scenario is likely.
So hopefully this latest batch of aftershocks will be the last gasp, and after a few more months they’ll start tailing off. Of course, we’ll still get occasional little wobbles for years to come, but little ones we can live with.
Of course, the alpine fault is still overdue for a big one…
^ ^
00
=+=
v

Things that were good about today: I had lunch with Harvestbird, which is always enjoyable, and had the bonus today that she came bearing gifts: leftover birthday cake and a bag of blackboy peaches (terrible name, excellent peaches). My cold is, if a long way from gone, at least beginning to reduce in intensity. It…

raduation yesterday, and as usual I volunteered to help out – it’s a fun way to spend an afternoon (it’s so cool to be part of a ceremony that includes a whole lot of traditions straight out of the middle ages), and it’s always nice to see the students reach the end of all their…

‘ve cleaned up after last night’s party, and I’ve made release notes on the books we left on the Christmas Book Tree, so that means all my “have to do” stuff is finished with for the year.  Now all there is left to do for the next three weeks is relax – I’m finally on…

erm started this week, and I’m already swamped with work (it’s worrying when the lecturer says she’s going to give you a nice easy reading for the first week, and it’s 40 pages long (and that’s not counting the two “optional” readings that go with it…).  Yeah, I kind of forgot just how hard Honours…

Mojosmom’s suggestion of a peach cobbler sent me off to Google.  I’d only ever encountered cobblers in fiction, but Google quickly turned up a plethora of recipes, all completely different.  In the end I found one that seemed to resemble what she’d described, so (after a bit of tweaking to adapt it to metric measurements,…