I spent a lovely day today with Pieta at a Christmas craft workshop run by Rekindle.  Rekindle were set up after the earthquakes to try and make use of some of the huge amount of waste from demolished buildings.  They’ve expanded now to find ways of making use of all sorts of what they call “undervalued resources” – things that would normally end up in landfill.
The first thing we learnt in the workshop was how to turn kouka (cabbage tree – for the foreigners, think a flax bush on stilts) leaves into string and rope.  Cabbage tree leaves are definitely something most gardeners consider waste – the trees drop the long stringy leaves all year round, and they’re notorious for getting wrapped around the blades of lawnmowers, and being incredibly tough (so they can’t even be composted).  So perfect for making rope out of – you just twist up a couple of leaves (or thin strips of leaves for string), then twist them around each other in the other direction, and the opposing tensions of the two twists hold the fibres together really strongly – it’s the way rope has been made for centuries (and still is, but now there’s big machines for doing the twisting).
Once we all had long lengths of string made, and even longer lengths of rope, we moved on to making wrapping paper – or rather, decorating offcuts of brown paper that had come from industrial waste.  Armed with a selection of paints, and wooden shapes to use as stamps, we got creative, painting and stamping our sheets of paper (and card, to use for gift cards) in all sorts of festive ways. 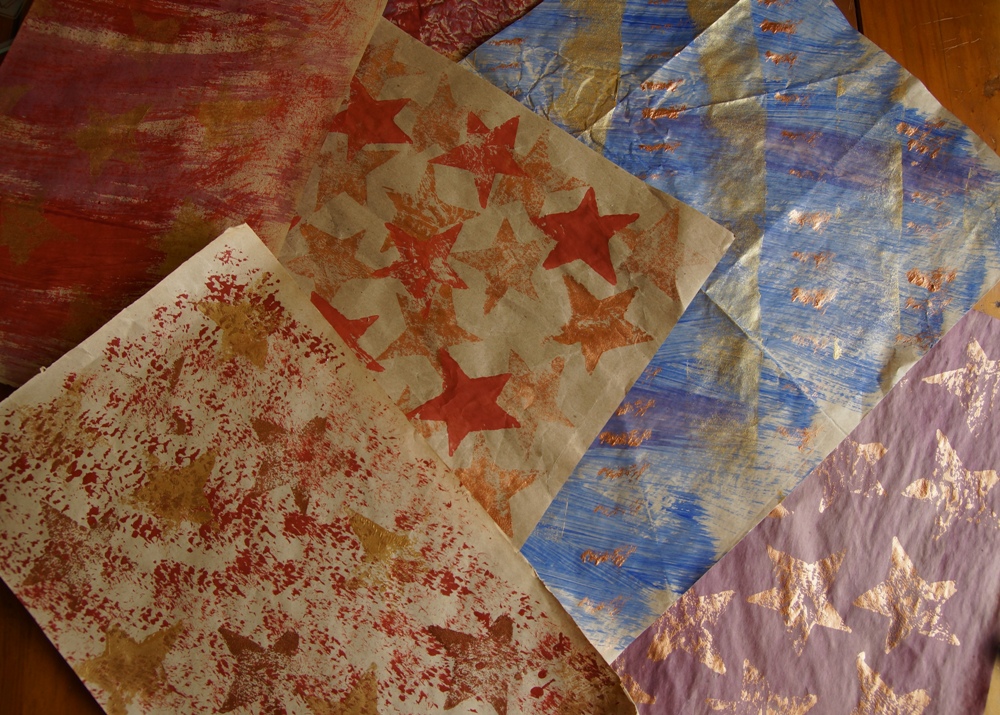 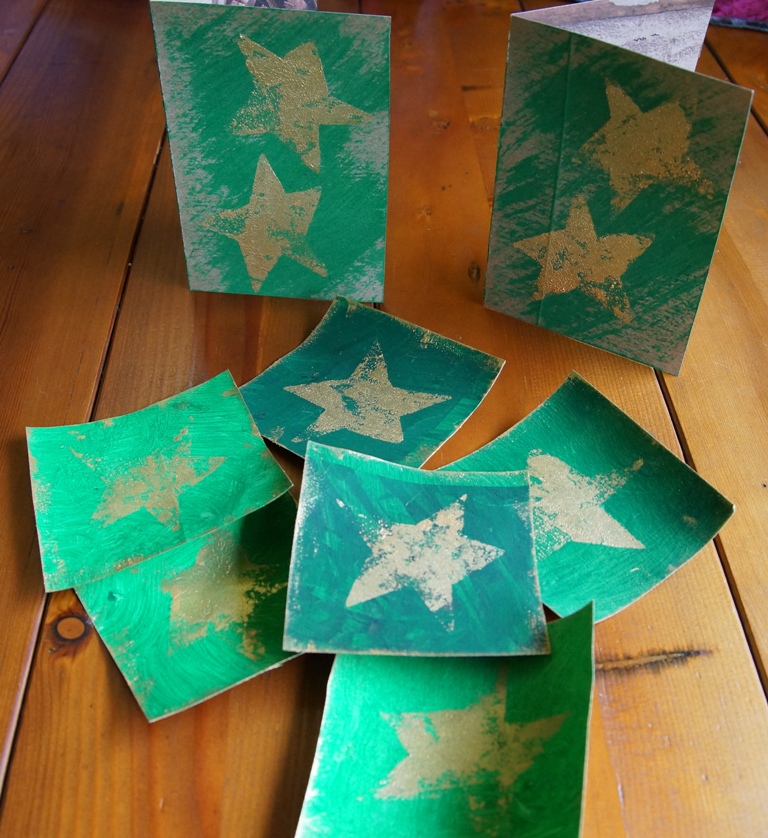 While the paint was drying (which actually only took a few minutes in the continuing heat wave), we made wreaths – weaving a base from basket willow, and then wrapping it in the kouka rope we’d made earlier. More wooden shapes (which Rekindle produce in great quantities from timber offcuts, and mostly sell as Christmas decorations) were distributed to decorate the wreaths, but I chose to use the ones I’d been using to stamp with, because I liked the way the leftover paint on the stamp side looked. 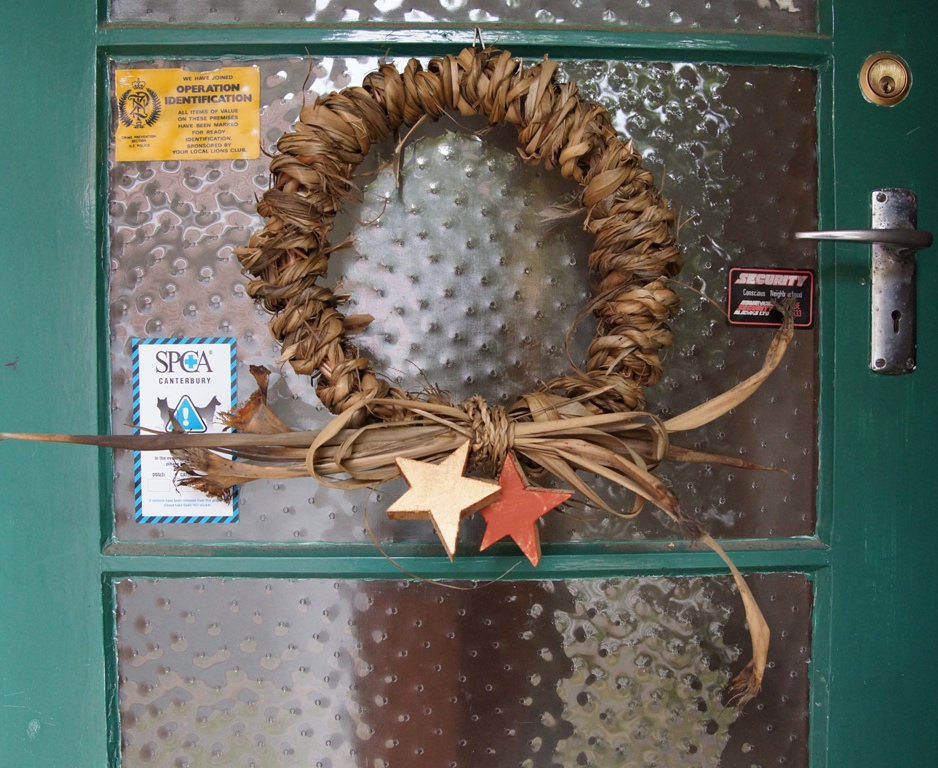 Even though we were all using the same basic techniques to create our wreaths, they all ended up looking very different – as well as them varying in size and thickness, some people went for super tidy and tightly wound, and others went for a wild and natural look, leaving all the stray ends of the leaves poking out. Mine was somewhere in the middle – definitely not totally neat and tidy, but I did trim some of the wilder loose ends down a bit. (As you see, it’s already hanging in pride of place on my door, replacing the cheap plastic wreath from the Warehouse that used to sit there.)
After a break for lunch, our next craft was turning some of our wrapping paper into Christmas crackers. We’d been told to bring along any little gifts we wanted to put inside the crackers (and some toilet roll inners, if we could, to form the inside part of the cracker, although they had plenty there for anyone who didn’t bring their own). We used the kouka string we’d made earlier to tie the ends of the crackers, so the only part of them that wasn’t recycled or handmade was the cracker pulls (the bit that makes them go bang when you pull them) – the instructor said she’d had to buy them, because she’s never figured out a way to make them (although in theory it wouldn’t be that hard – hmm, now who do I know who sells gunpowder? 🙂 ). I was really pleased with how mine turned out: 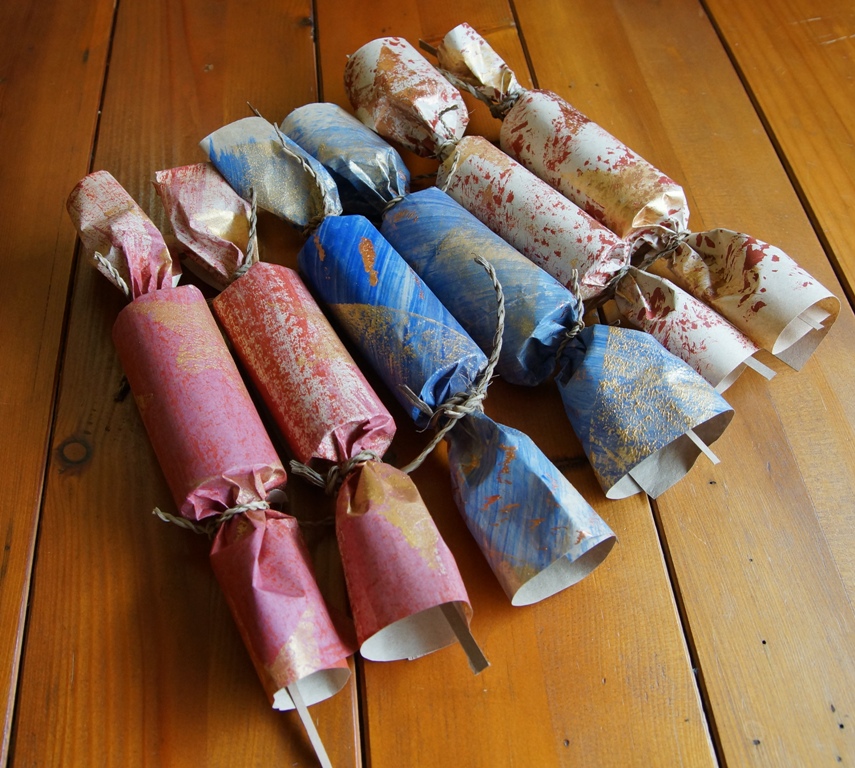 That was, in theory, the end of the workshop, but because we still had some time the instructor showed us how to do a little bonus craft, making stars from basket willow, tied together with yet more strands of cabbage tree leaves. I wasn’t as successful at making the stars – it was really hard to get the tension right tying them off, and I kept either snapping the cabbage tree strands because I’d pulled them too tight, or having the entire thing unravel on me, so I gave up after making a couple of them. Plus it was getting really hot in the workshop space we were in, and I was starting to feel a bit crafted out – I think if I’d tried making them at the start of the day I would have had more patience with them. 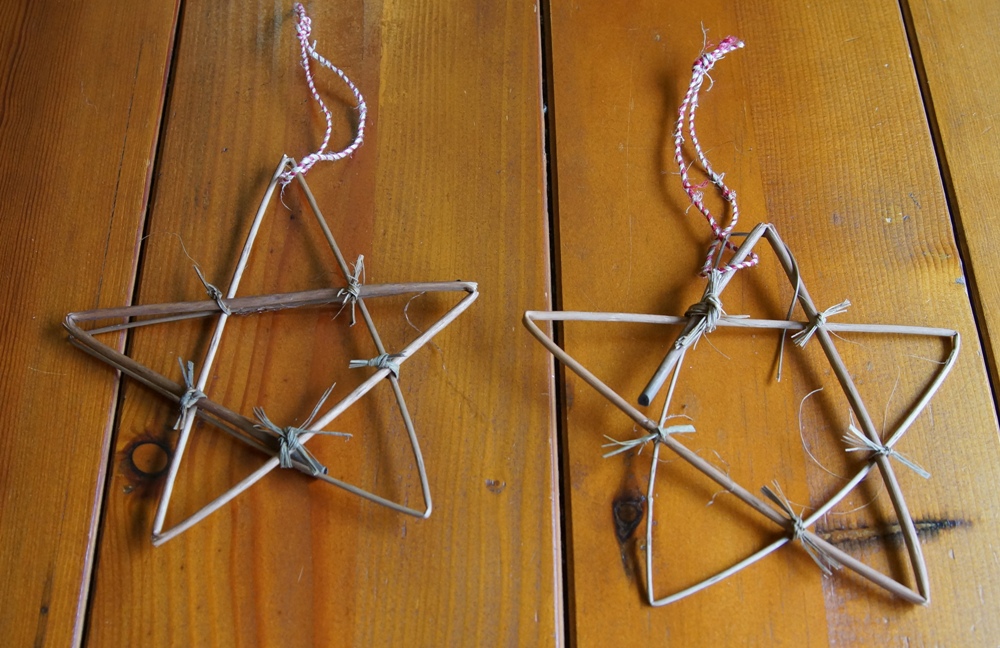 So that was my day of non-consumerist creativity.  Despite being long, hot and a bit tiring, it was definitely worth doing – loads of fun (and the nice thing about making things out of “junk” is that nobody expects it to turn out perfect 🙂 ).

Just finished writing a blog post for our CEISMIC blog about the Nepal earthquake, so rather than re-cover the same ground here, I’ll just post a link.

Work in progress (yes, it is as sticky and clumpy and hard to apply delicately as it looks): Design complete and henna dry, now I’ve just got to wait a couple of hours: And the end result: That was after 2.5 hours (I was aiming for 3, but I forgot the number one rule of…

Apparently there was some sort of sporting event last night which people were getting kind of excited about (the turnout at Toastmasters was the lowest I’ve seen since the coldest days of winter – presumably everyone was at home watching the match).  I enjoyed Harvestbird’s commentary – she sent me regular tweets about the relative…