You may have noticed a slowing down in the production of birds lately. That’s because these last few are so much more complicated than the earlier ones. 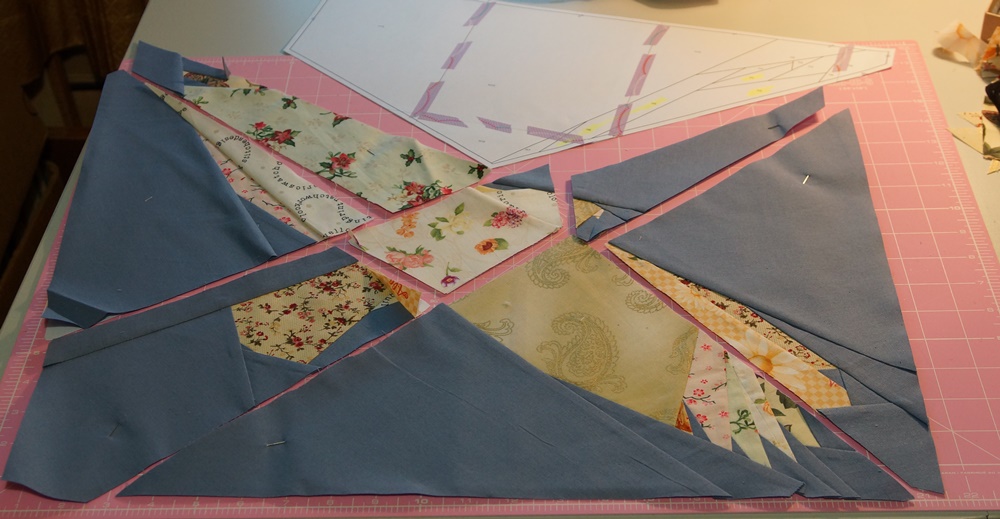 With the first few birds, I could easily churn one out over a couple of evenings, but these later ones need a lot more concentration to make sure I’m getting all the bits right (especially all those individual feathers – long thin strips are the hardest bits to get right with paper piecing (unless you want to waste lots of fabric), because you have to line everything up just right so that when you fold the fabric over it will end up in the right place, but the fold is usually at a weird angle to the strip, so you end up having to lie the fabric down in what seems like completely the wrong direction (I’m not doing a great job of explaining this, but really all you need to know is that it’s complicated and requires much alertness not to mess it up)).  So I’m less inclined to work on them in the evenings, when I’m tired and more likely to make mistakes.  Which means when I have a busy and social weekend like last one, I don’t have much progress to show you.
You might also notice this bird looks a bit bigger than the others.  That’s because it is.  The quilt layout Tartankiwi suggested calls for ten birds sewn at the 12-inch* block size, and two 24-inch.  But because I’m adding in the optional bonus seagull, I need to rearrange the layout a bit to fit it in.  So to keep the overall composition looking reasonably balanced, I decided to increase the size of the 10th bird to 18 inches (it looks good in my rough sketch, anyway…)
Actually, I’m glad I increased it in size, because that beak has some incredibly tiny parts to it – so much so that it was tricky finding the balance between a stitch size small enough that there’d be more than a couple of stitches holding each piece of fabric on, but not so small that it perforated the paper too much for it to hold together.  I ended up having to tape the fabric to the paper (I have discovered the magical powers of washi tape – it’s like sellotape but doesn’t melt if you iron over it, so it’s incredibly useful for sticking down all sorts of things when you’re sewing.  I’m sure that’s not how the experts would do it, but if it works, who cares!) at one point because it had so few stitches holding it on that it kept twisting around and getting out of alignment.  It would be nearly impossible at the 12-inch size.
*Good thing I grew up in the 70s when most people were still using imperial, so I’m reasonably bilingual when it comes to measurements, because for some reason everything about quilting is done in inches.

hich means I can finally reveal the secret project I mentioned ages ago. In fact, it was two secret projects.  Or possibly just two iterations of the same secret project.  When browsing the internets looking for patterns to feed my new paper-piecing obsession, I came across a lovely chicken pattern that was just crying out…

Didn’t manage to get it done in the promised under an hour (it was actually closer to two), but I did get it done. Most of that time was taken sewing the first very long seam (when you fold the super-long strip in half and sew down the entire length), and in untangling the knots…

I’ve been using a couple of random bits of fabric and batting as a practice quilt sandwich, for checking tension and trying out new quilting patterns before I actually start quilting something. I’d completely filled up the piece with stitching, so I was about to throw it out and replace it with some new scraps,…

Phase 2 complete: (Photos taken by Lucy-Jane) Yes, the lights do flash on and off.

ight, I’ve decided my impulse to just give away all those old cross-stitch projects that have been languishing in the bottom of my trunk since I finished them is a good one, so this is the first in an occasional series of giveaway posts.  I’m not sure exactly how this is going to work, and…