This weekend was the last of my totally-booked-out weekends of November, and it was the busiest of all (well, apart from the convention weekend, of course).  First, on Saturday, after a quick attempt to clean the house, I went into town to meet up with Harvestbird and family for the Climate March.  There was a really good turnout (helped I’m sure by the lovely weather), and people of all sorts and ages – from families with small children to the very frail and elderly woman who asked for my help getting to Victoria Square from the bus exchange, because she didn’t know her way around town.  She told me she hadn’t been planning on going to the march, but decided it was important, so she made the effort to get herself into town.
A few random photos from the speeches bit before the march started: 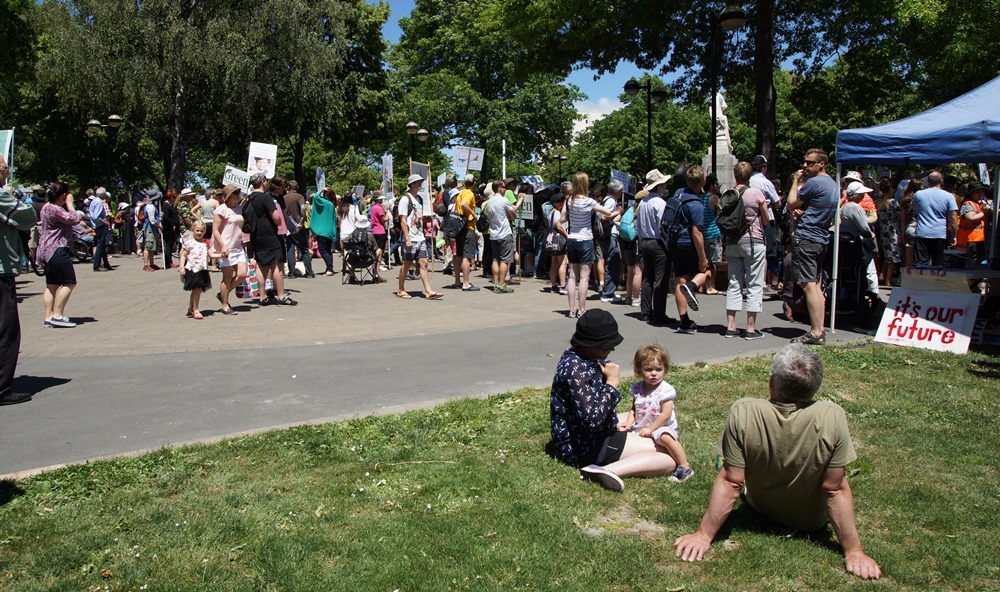 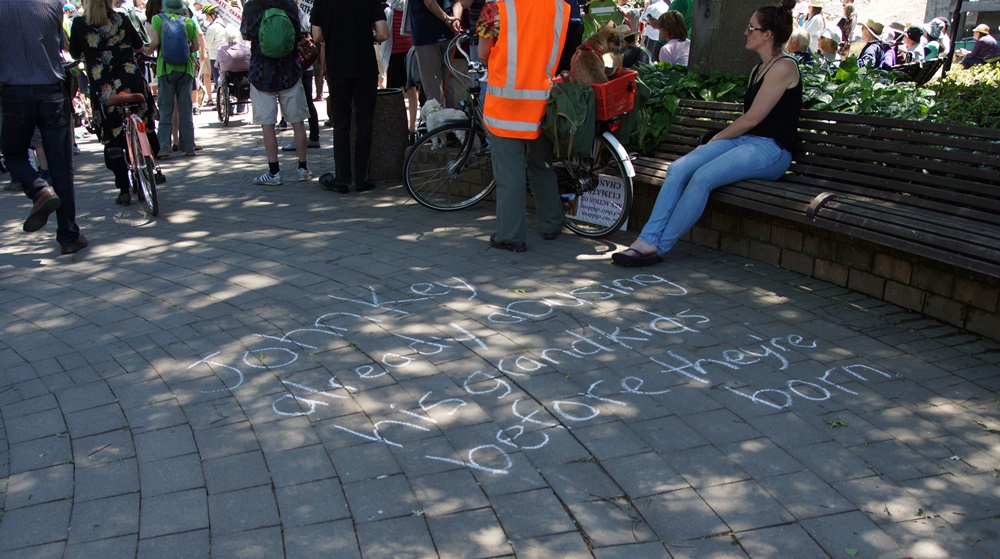 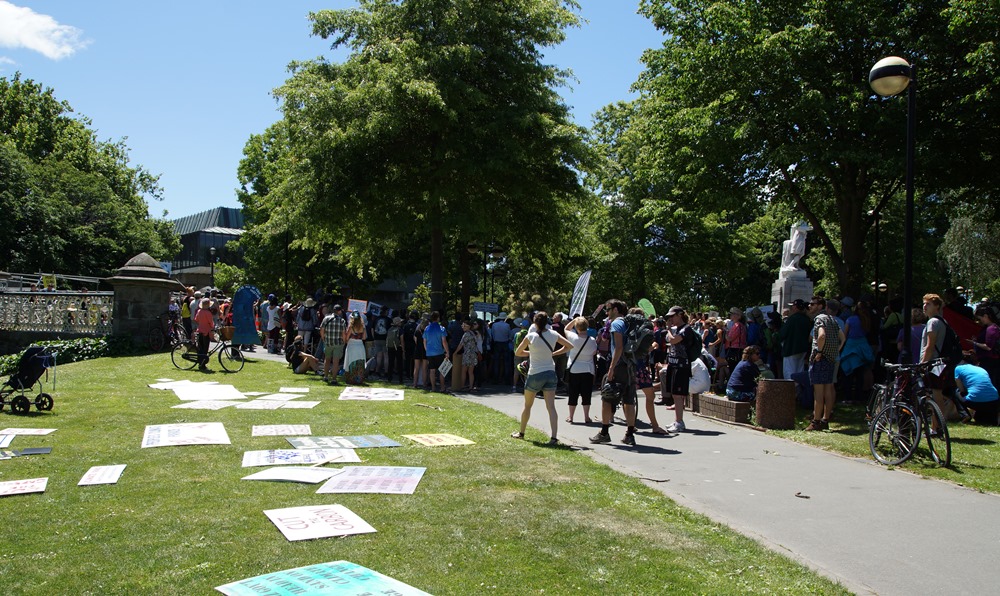 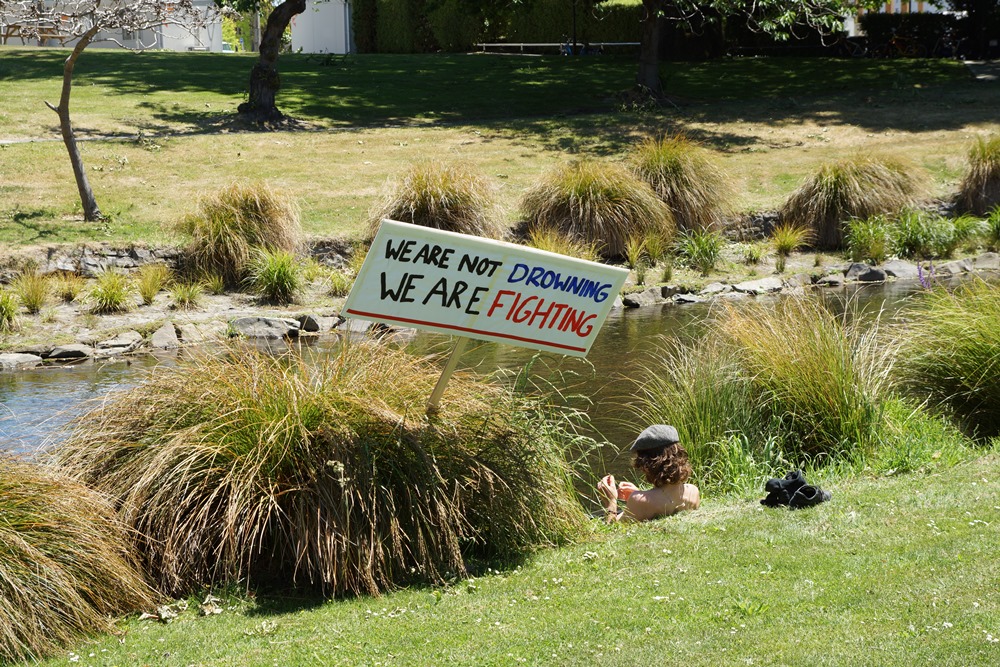 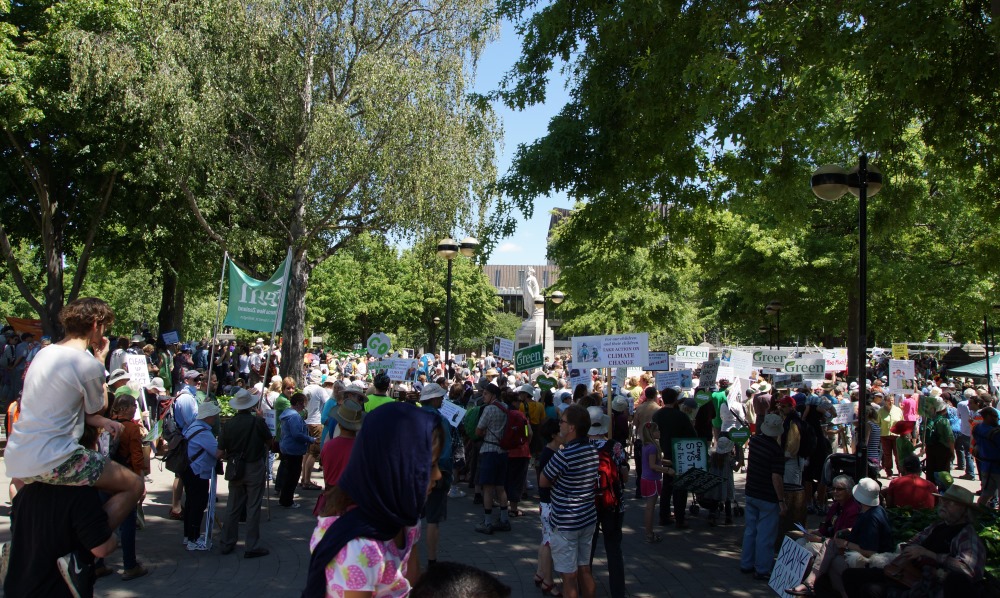 Apart from a bit of mini-Harvestbird grumpiness at such a long walk (which I made even worse by offering to give her a piggy-back: I got her up onto my shoulders and she immediately panicked about how high up it was – the first time in my life I’ve ever been told I was too tall!!! 🙂 ), it was a great march – there was live music along the way, everyone was cheerful and enjoying themselves (despite the serious message being conveyed), and generally fun.  And rounded off nicely by a stop in New Regent Street for Mrs Higgins cookies on our way home 🙂
When I got home, I just had time to whip up a batch of brownies to take as a plate, then it was time to head out again, to a games evening with the Gwilks.  For a change, all the games were ones I’d played before (didn’t mean I was any better at them, but at least I didn’t feel completely lost…)  As always, a fun evening, but a late one.
Then yesterday was devoted to a CEISMIC sewing bee.  Boss and his wife had their second baby a month or so ago, and the team and I were keen to make them another quilt to commemorate the occasion, this time one that we all contributed to making.  But we’ve all been so busy that this weekend was the first time we all had a day free at the same time – and as it was, Rosalee had to leave at lunchtime, because she had something come up, so Lucy-Jane and I had to finish off the sewing on our own. 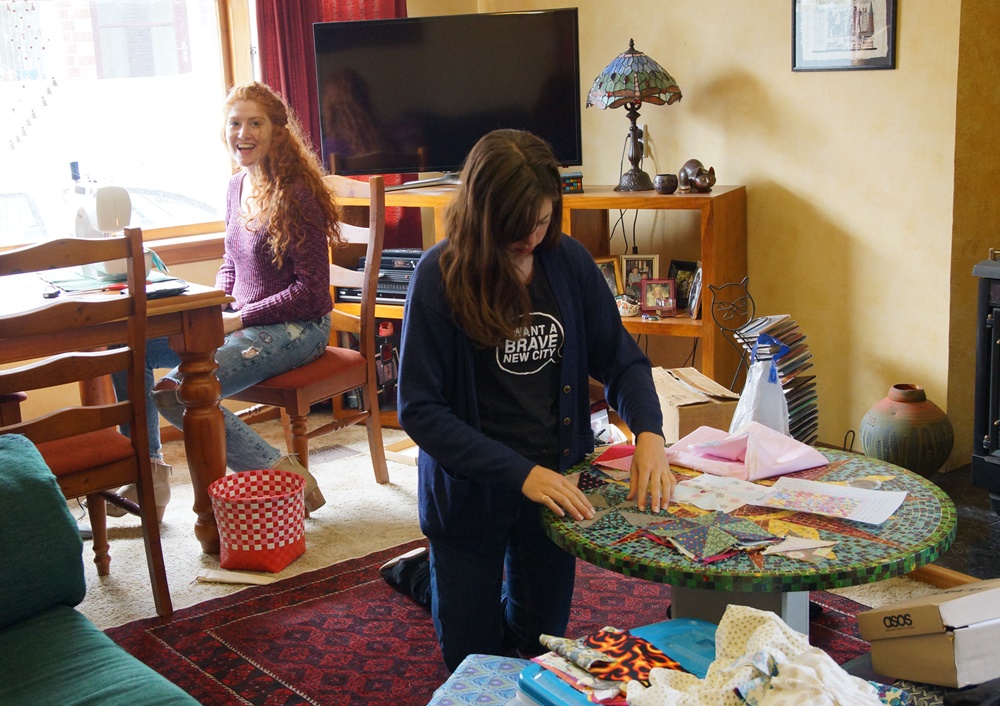 Although Rosalee and Lucy-Jane are both experienced at sewing clothes, neither had done any patchwork or quilting before, so there was a bit of a learning curve, so some of the first squares they pieced weren’t quite as accurate as the later ones, and you can clearly see the differences between our tastes in the fabric choices for our respective squares, but I think for a cooperative project the end result is reasonably coherent 🙂 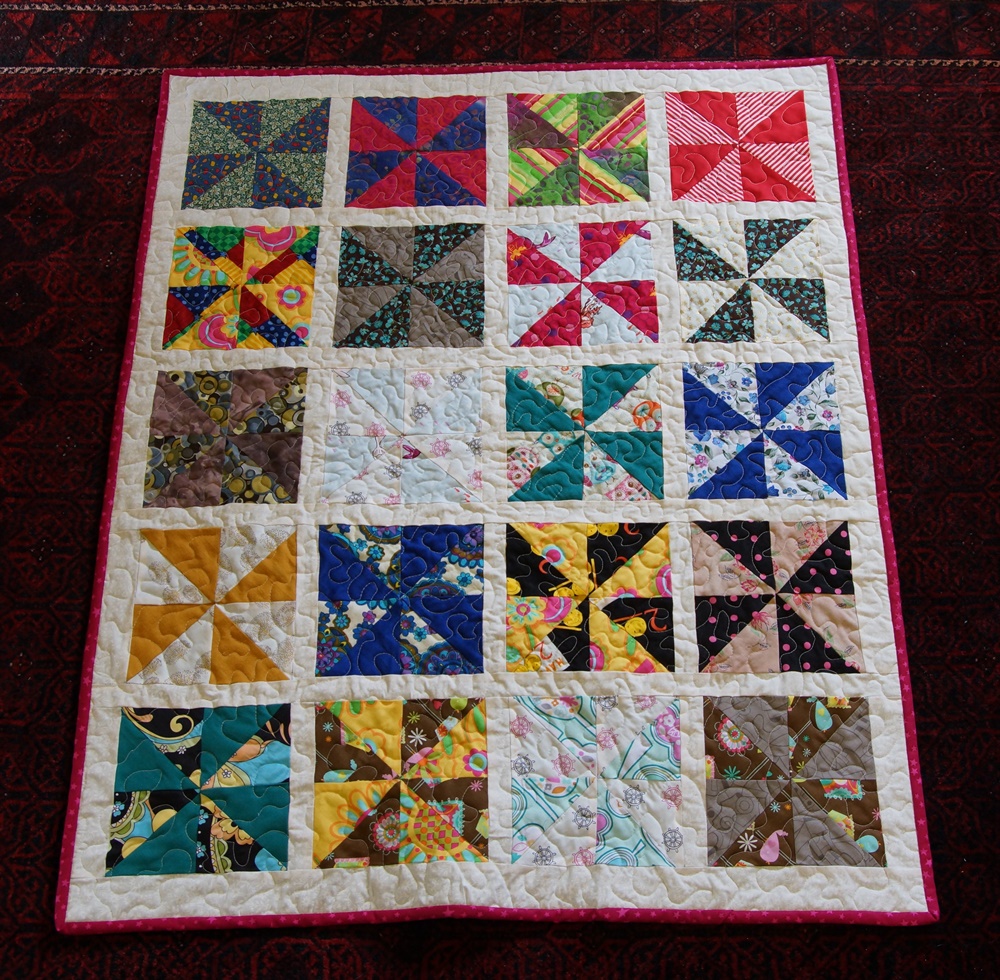 Lucy-Jane had a cutesy fabric panel in her stash that worked nicely as a backing, so I quilted and bound it last night (even hand-stitched the binding – the boss better appreciate the sacrifice involved!), and voilà, one baby quilt, finished in record time. 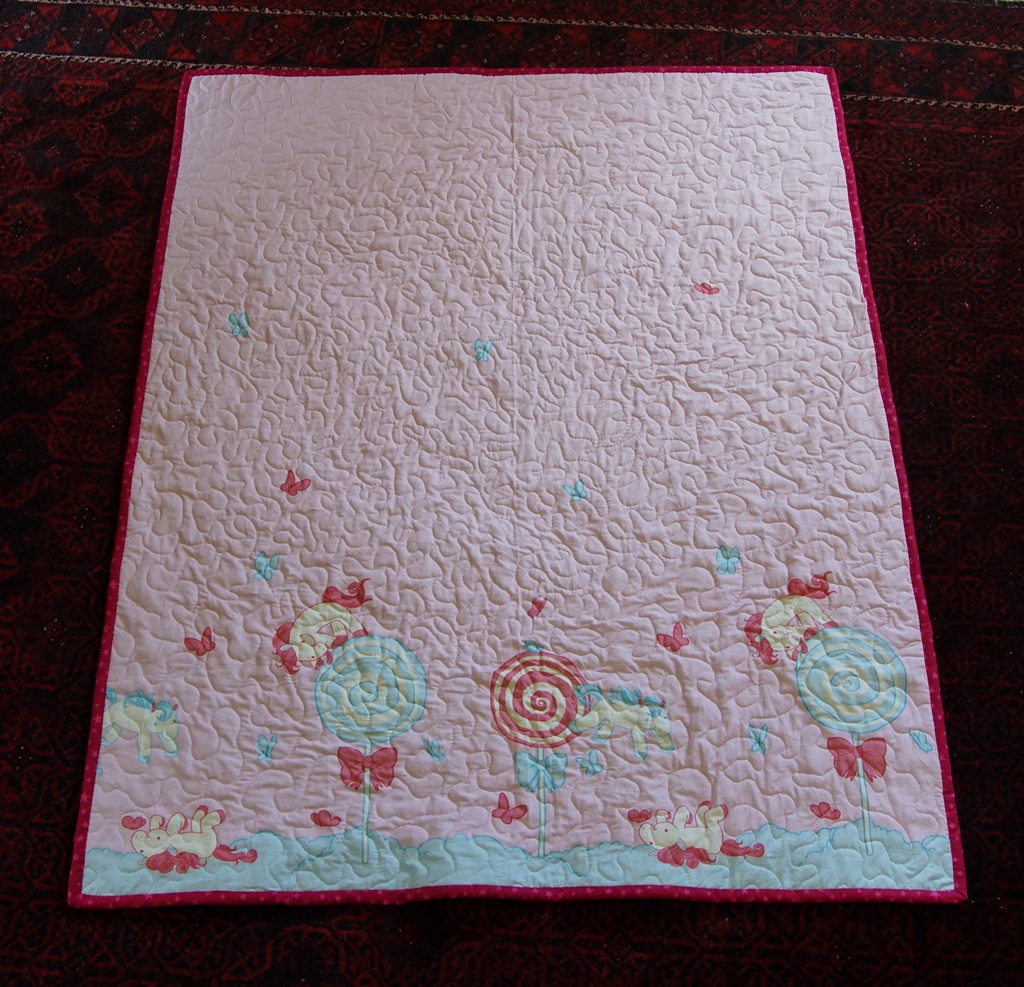 This new quilt is definitely slower going than the jelly roll race one (mainly because the seams have to be pretty accurate for it to work properly), but I am making progress.  I spent a couple of hours this afternoon sewing the squares I’d cut out back together again: And then this evening I cut…

It’s been fun having the kids here, but I’m SO glad they’re going home tomorrow – I’m exhausted! Niece and I had our special “girls only” day today.  When I asked her what she wanted to do, she said “Shopping!”, so our first stop was Riccarton Mall.  I was relieved to discover that her boredom…

ou guys know me.  You know what happens when a craft catches my attention: I spend some time learning the basic skills, maybe go to an introductory class, do a bit of internet research… and then jump straight into the most complex high-difficulty project imaginable, and try and work out how to do it from…

ot a phone call out of the blue last night from a former Dunedin bookcrosser, Simon.  I didn’t even remember who he was when he introduced himself (and I still can’t remember what his screenname was), but eventually a vague memory formed of a pleasant but shy young man who I’d met a few times…

After such a long time without blogging, I seem to have forgotten how to just sit down and start writing. So to ease myself back in gently, a photo-heavy post (which of course takes much more work than just typing stuff, so I’m not sure why I think this is easier…) Anyway, this is going…