esterday was another very busy day (one day I really must have a restful weekend…)  It started with a mad dash for the bus (after I completely miscalculated times) to get myself over to Heathcote.  It’s a long trip by bus, involving a meandering (and bumpy – I always forget how bad the roads still are over there) route through the eastern suburbs and a change of bus in Linwood, but about an hour or so later the bus finally turned off into Heathcote Valley, along a narrow road completely lined with parked cars and thousands of people walking up the hill to the same destination I was headed for (except for once taking the bus was the easy option, because I hadn’t had to park miles away and walk) – the entrance to Lyttelton tunnel.
The reason for the mass exodus was that in celebration of the tunnel’s 50th birthday, it had been closed to traffic for a couple of hours and opened to pedestrians and cyclists – the first time that had happened since its opening day.  Some of the people on the bus with me were talking about how they’d walked through it as children, and were back 50 years later to walk it again.  Along with a lot of others – the Press estimated 25,000 people took advantage of the unique opportunity to walk under the Port Hills. 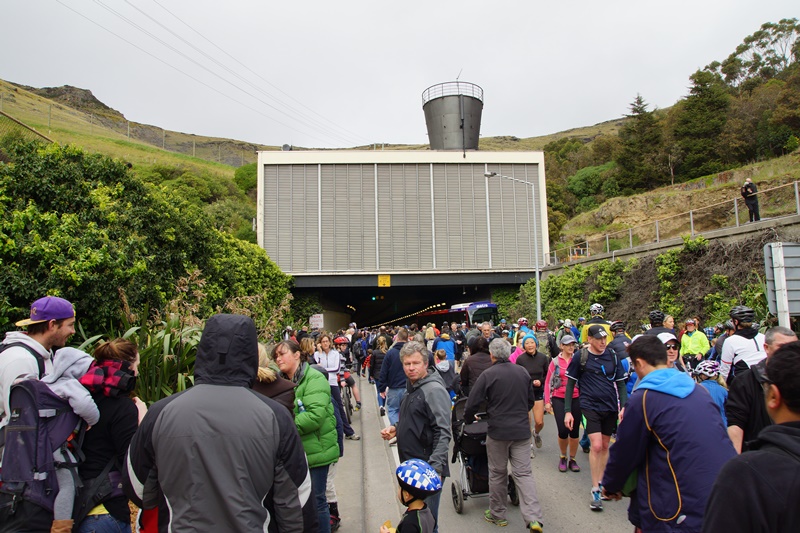 It’s a surprisingly long tunnel – about 2 km.  It feels short when you’re going through in a vehicle, but it’s a fair distance on foot.  And the slope is a lot more noticeable on foot than it is in a car, too. Those of us sensible enough to start at the Heathcote end had a nice downhill stroll, but there was quite a bit of puffing and panting coming from people passing in the other direction, climbing up the long hill from Lyttelton. 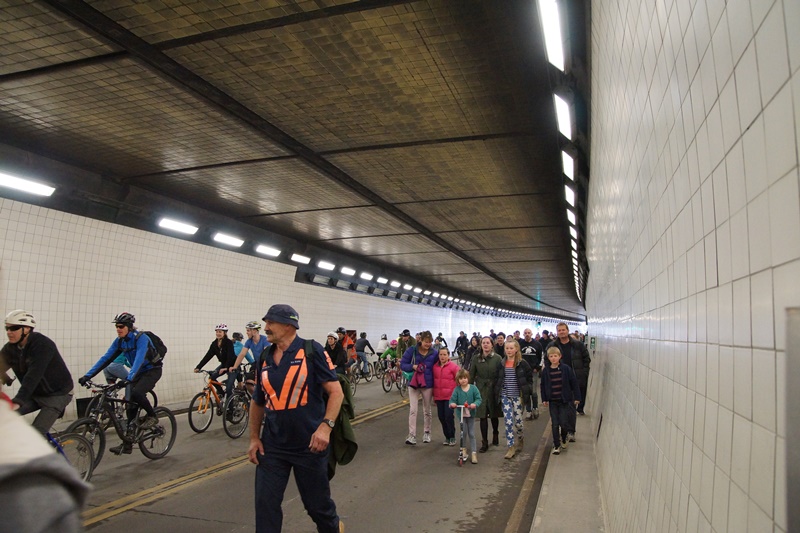 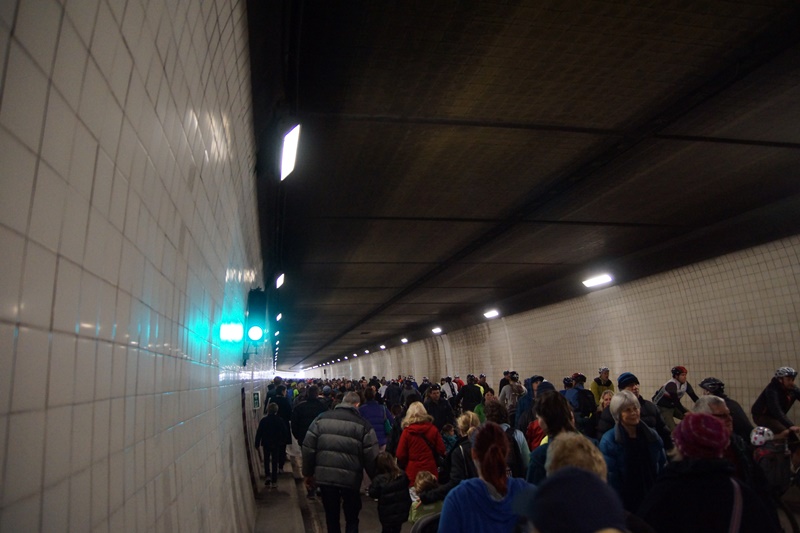 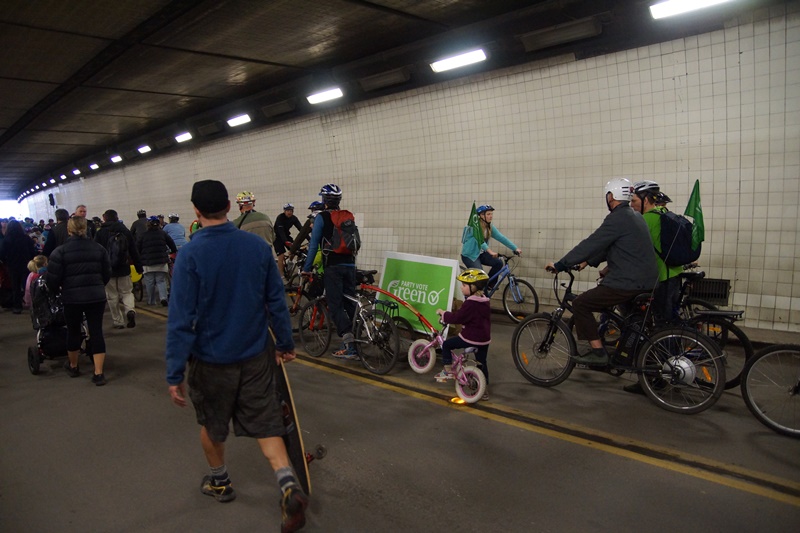 The politicians were out in force, of course, with so many people around, but the Greens were the only ones I actually saw in the tunnel itself. The others had just positioned themselves outside the exit. 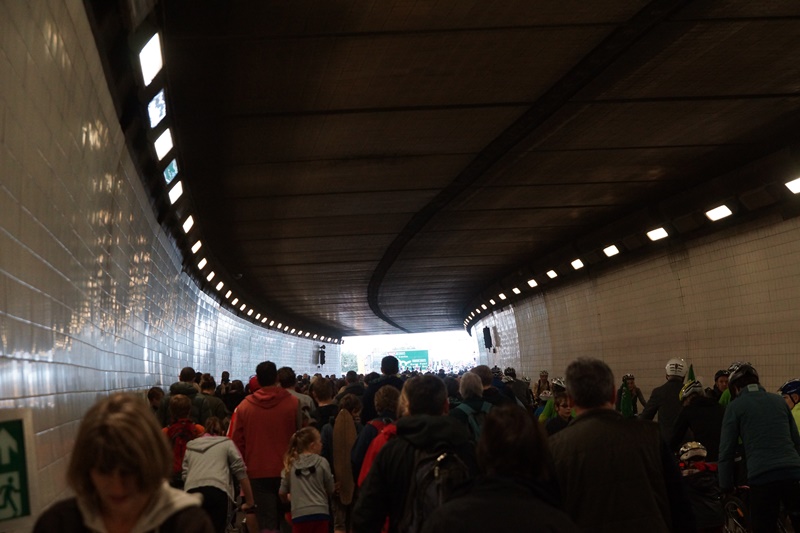 The light at the end of the tunnel!
A few people have been complaining the event was badly organised, but I think it was actually pretty impressive the way they managed to herd so many people through in the couple of hours it was open. One lane was for walkers, and the other for cyclists and skaters, and despite the crowds everything seemed to move pretty smoothly. There were occasional traffic jams in the cycle lane when large groups going in opposite directions would meet and have to pause for a bit while they negotiated their way past each other, but they seemed to clear quickly enough. The only real squeeze was at the Lyttelton entrance where the roundabout was still open to traffic heading to Dyers Pass (because otherwise there would have been no way out of Lyttelton, with the tunnel closed and the Sumner Road still out of action), so the tunnel walkers and riders were restricted to the footpath and half a lane of the road, but everyone seemed to be managing ok, it just slowed the cyclists down for a bit. 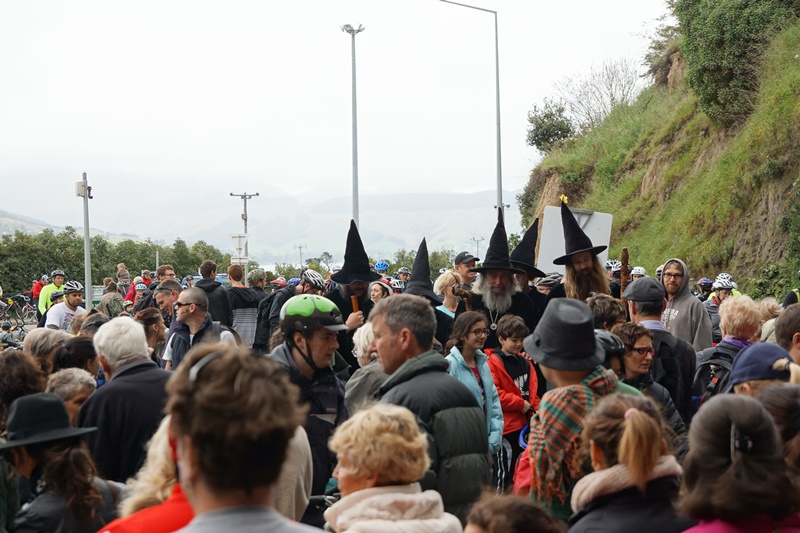 The Wizard and his apprentices holding court at the tunnel exit. 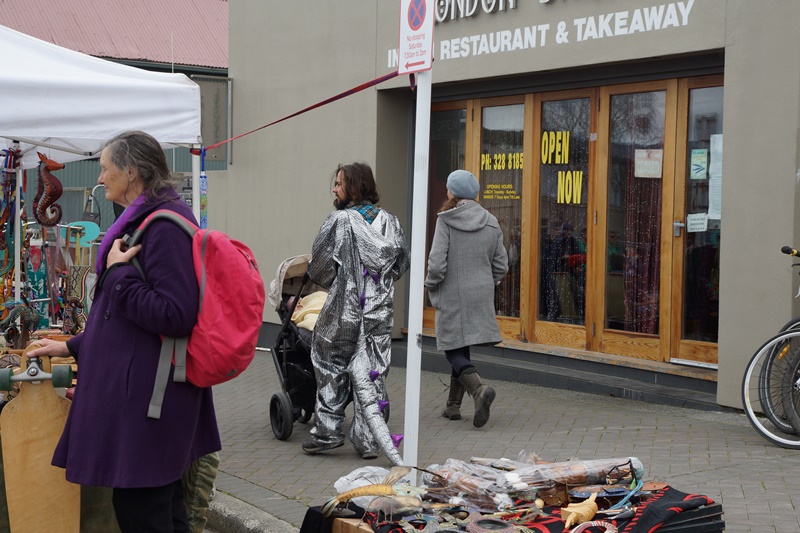 No idea why this guy was wearing a silver dragon costume, but that’s Lyttelton for you 😉
There was a market on in Lyttelton, but I wasn’t greatly inspired by it. Surprisingly there were no food stalls – a huge missed opportunity there, because with such crowds in town the few cafes and bars were all completely packed, so there were a lot of people wandering around trying vainly to find lunch. Anyone running a food stall could have made a fortune! 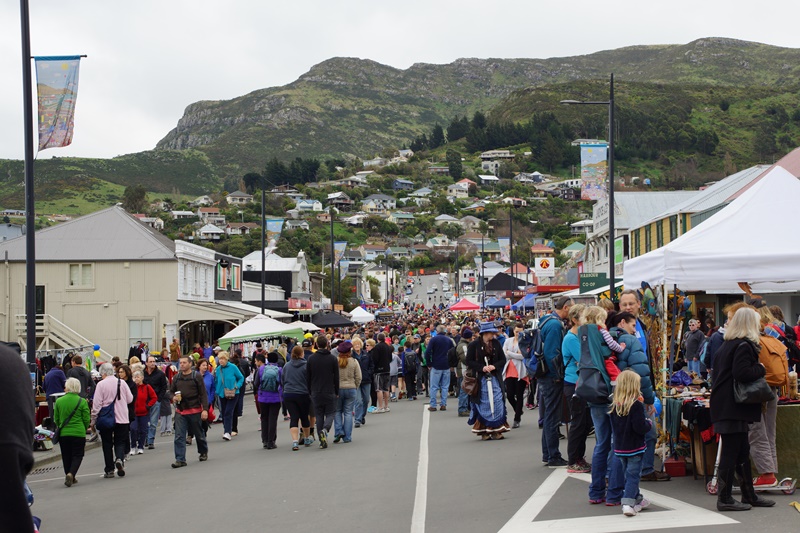 I’d only had a bit of fruit for breakfast (see running late for the bus), so I was definitely feeling in need of lunch, so when I realised getting food in Lyttelton wasn’t going to happen I decided to head back over the hill to Christchurch. When the tunnel re-opened to traffic there were going to be free shuttle buses taking people back to Heathcote to their cars, but as I would have had to catch a bus from there anyway, I decided to just catch the normal Lyttelton bus back into Christchurch, which was still running but diverting over Dyers Pass.
Unfortunately, they hadn’t advertised the difference between the shuttle buses and the regular bus very well (I explained it to quite a few confused people standing near me in the queue), so loads of people all crowded on to the normal bus, which meant a lot of us ended up standing. Which I don’t mind normally, but the road over Dyers Pass is a steep and winding one, so I was having to fight off motion-sickness the whole way. And, because there was a brisk wind blowing, I was all bundled up in heavy jacket and scarf, but of course once in a crowded bus with the heaters going and surrounded by people, I warmed up very quickly. So between the feeling ill and the heat and the standing (and probably the no food thing didn’t help either), by the time we reached the top of the pass I was starting to feel rather faint. In the end I decided the only way to survive the trip without keeling over was to sit down in the aisle – that helped a lot, but I obviously still didn’t look great, because an elderly woman sitting nearby asked if I was ok and gave me her water bottle (and then her and her equally elderly friend started arguing about which of them was going to stand up and give me their seat – at one point they were both standing, while I kept telling them not to worry, I was quite comfortable sitting on the floor!). So yeah, not the most pleasant bus trip ever – I was so relieved when we got down onto the flat and back on nice straight streets again!
Once in town, I grabbed some lunch then headed home for an hour or so, then it was back out again to another Writers’ Festival event, “Survivor Poetry”. Mrs Gwilk was competing in the event – a poetry competition based around the concept of the Survivor TV series.  The contestants were given various challenges, mostly involving having to compose poems on the spot.  A panel of judges awarded “immunity” to the best poet in each round, and then the contestants would vote on which of the rest of them would be eliminated.  There was of course a lot of strategic voting going on, so a couple of the poets that seemed particularly talented ended up getting eliminated quite quickly.  They were all really good though, and it was an exciting (and hugely entertaining) evening.  Mrs Gwilk made it into the top two, which I think she was pretty pleased with, seeing as she’d been happy enough just to make it through the auditions!
So an enjoyable day all round (well, apart from the horrible bus trip, that is), but a very tiring one.  I think I need a weekend to recover from the weekend…

And finally, a couple of pictures for Lytteltonwitch: they’ve pulled down Lyttelton Main School! 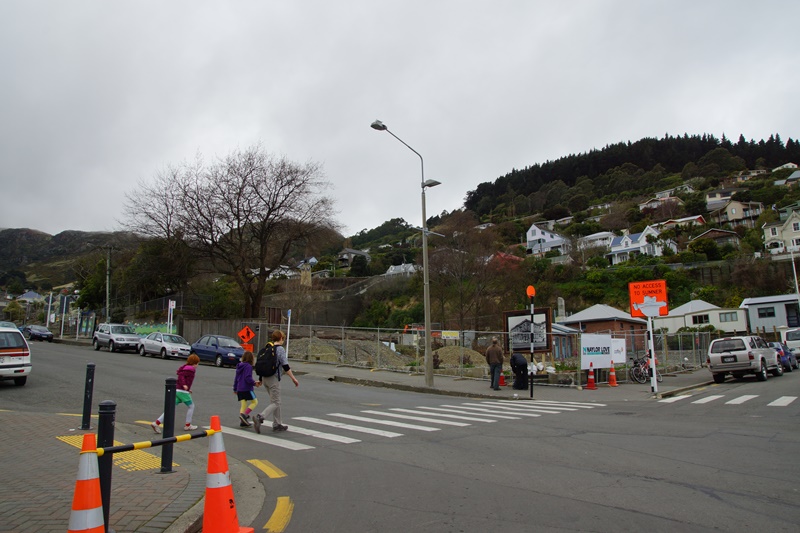 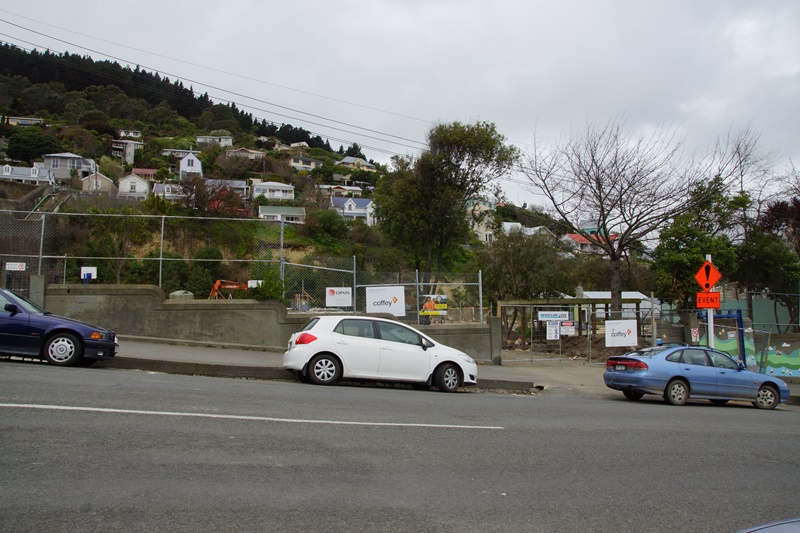 Today marks the first anniversary of the February 22 earthquake, technically smaller than the 4 September one, but so much more destructive, being centred almost directly under the city. 185 people dead, countless injured, and most of the central city destroyed. One year on, it feels like only yesterday yet also feels like we’ve been…

It’s been fun having the kids here, but I’m SO glad they’re going home tomorrow – I’m exhausted! Niece and I had our special “girls only” day today.  When I asked her what she wanted to do, she said “Shopping!”, so our first stop was Riccarton Mall.  I was relieved to discover that her boredom…

The aftershocks continue: The red lines on the seismograph are where they’ve cropped the trace so that it doesn’t totally obscure the rest of the graph. Most of them are 3s, which we don’t really feel over this side of town (the epicentres are in the east of the city or just off the coast),…