This is one of my favourite things at this time of year: 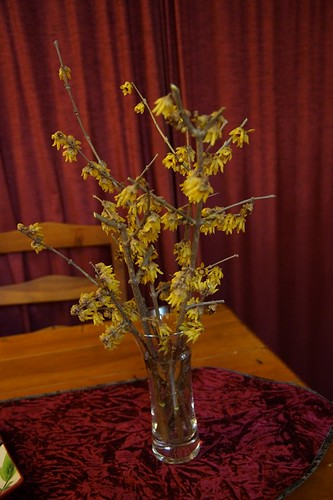 The big exciting news in Christchurch is that we’ve got our city back!  The cordons came down last weekend (well, apart from a few small ones around individual buildings that are still dangerous, but the roads are almost all open), and the army has moved out.  I went into town today for a walk around, and it was the most amazing feeling to be able to just wander wherever I wanted.  I felt kind of like a kid on Christmas day overwhelmed by all the presents and not sure which to open first – I couldn’t decide where I wanted to explore!  I went to the Square, of course, which was buzzing with people, all with the same slightly dazed look that I’m sure I had on my face too – we’ve had the cordons up for so long it’s very strange to have them gone.

The council and organisations like GapFiller have done a great job of brightening up the city with artworks and plantings, distracting the eye from the gaping holes on the skyline, and the remaining damaged buildings.
There was even a busker in the Square!

Given the extremes of weather of the last few weeks (snow one day, 20 degree nor’westers almost the next), it’s not surprising the plants are all a bit confused about what season it is.  Autumn leaves and spring flowers all at once…

I wandered around the city for a couple of hours, then met up with Harvestbird for another exciting moment – the opening of the first of the Arts Centre buildings to be restored.  It’s only the Registry building, not part of the main complex, but it was still such an overwhelming feeling to be able to go inside a heritage building again – I wasn’t sure whether I wanted to laugh or cry.  A feeling I’m sure will be completely incomprehensible to non-Cantabrians, but trust me, it’s a huge thing if you’re from Christchurch.

I spent last weekend down in Alexandra, being suitably spoilt for my birthday. I flew down to Queenstown on the Saturday. Dad met me at the airport and we spent a lovely (though very very cold – I always forget just how cold a Central Otago winter is!) day wandering around the town planning the release walk for October’s BCNZ convention (and more importantly, plotting a cool surprise for everyone – I’m very excited about what we’ve got planned). Of course, even though I was carrying my camera the whole time, I didn’t take a single photo. I’d blame the cold, but I think it’s actually because growing up down there I never think of Queenstown as somewhere that needs photographing – it’s just a place we used to go when I was a kid, so I somehow tune out the spectacular scenery and totally photogenic town.
Sunday I spent helping Mum with her card making. She’d been given a commission to produce some more masculine-type cards, so I helped her finish off some of the ones she’d started, and even came up with a few designs of my own. We had quite a good little production line going! 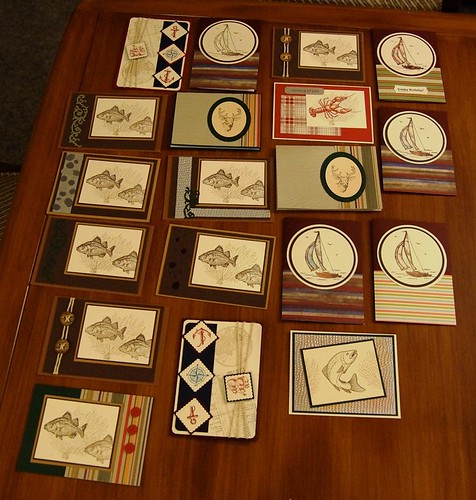 That evening my brother and his family came round for my official birthday party. My nephews decided that it needed to have a Star Wars theme (because I like Star Wars, of course), so they dressed the part as Han Solo and a clone trooper. 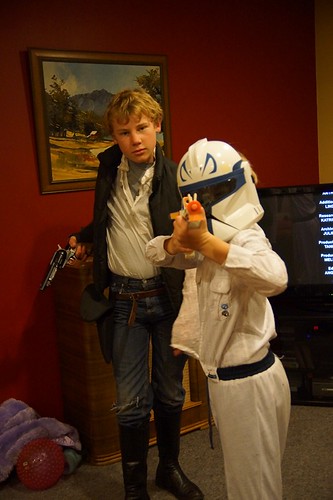 My birthday cake was a pavlova, and they decorated it with their Lego figures in an elaborate Hoth battle scene (which extended off the cake onto the table).  The only problem was bits kept falling over (the AT-AT only stayed standing for the photo because Mum was holding it up!), so there ended up being more cream on the toys than on the pavlova 🙂 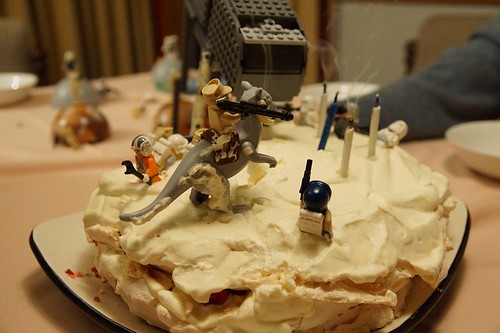 Niece didn’t want to dress up, but she demonstrated her curtsey for me: 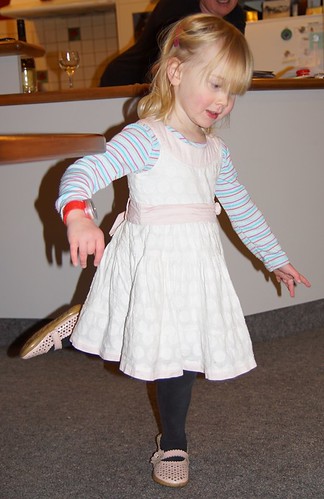 A wonderful night, and I felt totally spoilt – just what I needed for this birthday.
On Monday, we (Mum, Sister-in-law, Niece and I) drove down to Invercargill, to pick up Mum’s new cat (well, kitten – he’s 5 months old) from the breeder. 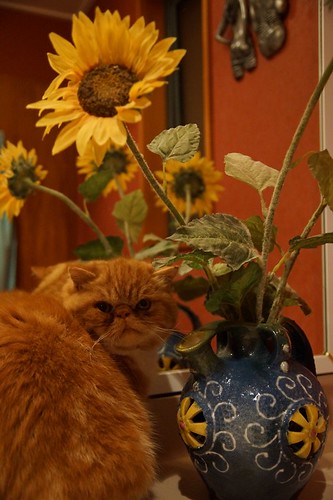 He’s totally gorgeous – a short-hair exotic (i.e. a slightly less fluffy Persian).  He’s pretty overweight (and no wonder – when the breeder was giving Mum instructions on how much to feed him, the amounts she was saying for one kitten was more than I feed my two cats combined!), which is why he looks older than 5 months, but he’s definitely just a little kitten at heart.
I’m not sure what his name is – it changed several times over the course of the trip back to Alexandra (Niece’s vote was for “Flowery”, which she insisted was definitely a boy cat name 😉 – other possibilities floated were Tom, James Garfield, Pumpkin, and Miki.  I *think* he ended up back at being Tom, but it may well have changed again…) 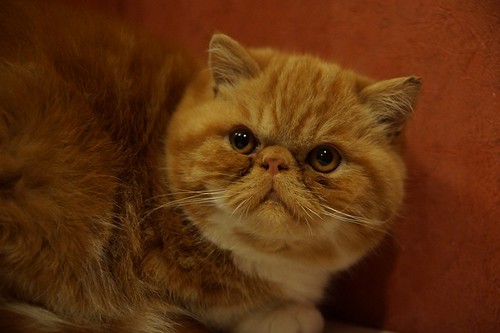 And just because it’s cute, a picture of Niece walking round the fish fountain in Gore: 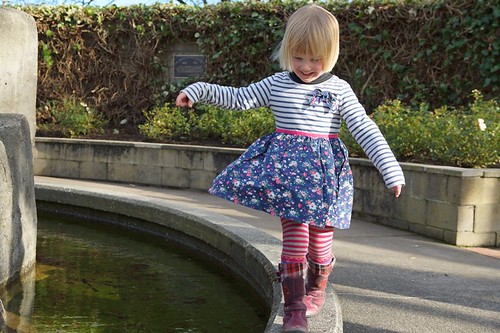 Flew back home on Tuesday, so it was just a quick visit, but I really enjoyed the break.  Best birthday ever!

Ok, so my plan for this weekend was to put the binding on my experimental quilt.  But the three new In Flight patterns were tempting me, as was an idea I’d had back when I was making the original birds, of reversing the plain background and scrappy foreground.  I never followed up the idea at…

The conference went really well – our talk seemed to be well-received (my boss was in the audience, along with at least three other people I know as experts in digital archiving, and all were nodding at the right places, so I don’t think I said anything too stupid 🙂 ), and (once the stress…

Had our second meetup of the newly-revived Christchurch Bookcrossing meetups this morning, and yet again we had new people turn up: NiceOrc (whose name I vaguely remembered from years ago) and her daughter. Plus Chuckacraft, who was there last month, came back, so it’s feeling like we’ve got the beginnings of a viable Christchurch meetup…

idn’t get round to grouting the mosaic today after all – when I read the instructions properly and saw the bit about having to clean the tiles 12 hours after you grout them, I decided to leave it until next weekend when I could actually manage that without having to get up early tomorrow morning…

But I finally finished the eagle: Only one more bird to go!