My bags are packed, my tickets are printed, the house is clean, and now all there is to do is wait a few hours until Lytteltonwitch and her son come to pick me up to go to the airport.  Evening flights do have the advantage of not having to get up at eek-o’clock in the morning to be at the airport on time, but there’s a lot more sitting around saying “Is it time to go yet?  How about now?”
Actually, it’s a good thing we weren’t leaving this morning, because there was a huge storm in Auckland overnight, and they had to shut the airport.  And the first leg of our flight is via Auckland.  Luckily though the winds dropped enough this morning that they re-opened the runways, so all is clear for the flight (though that first flight might be a bit bumpy – there’s a decent southerly blowing in Christchurch as well (and it’s raining and hailing and bitterly cold – winter has arrived with a bang), so I suspect there’ll be an interesting amount of turbulence.)

I’m sure I have been doing all sorts of interesting things since I last posted, but everything seems to have been pushed out of my mind by the whole I’M GOING TO FRANCE thing. I know there was a day of playing Lego with the mini-Harvestbirds (we built a shop for princesses to work in. It sold ice-cream and toffee apples. Because why wouldn’t it.), and I went to another recording of the Nerd Degree with Jacq and their partner (who was one of the panelists, which was cool), and an attempt at a Dog Boy viewing (except the person with the DVDs wasn’t available, so we watched Hot Fuzz instead), and lunch with people, and “we should catch up except I’ve run out of time, so maybe when I get back” with other people, and generally a very busy few days.
Oh, and the Tiniest Cucumber actually grew! Not much, but huge compared to the last photo I took of it. So given that winter is rapidly approaching so it probably wouldn’t get much chance to grow any bigger, and that I’m going away for a month, I decided it was time to pick and eat it. 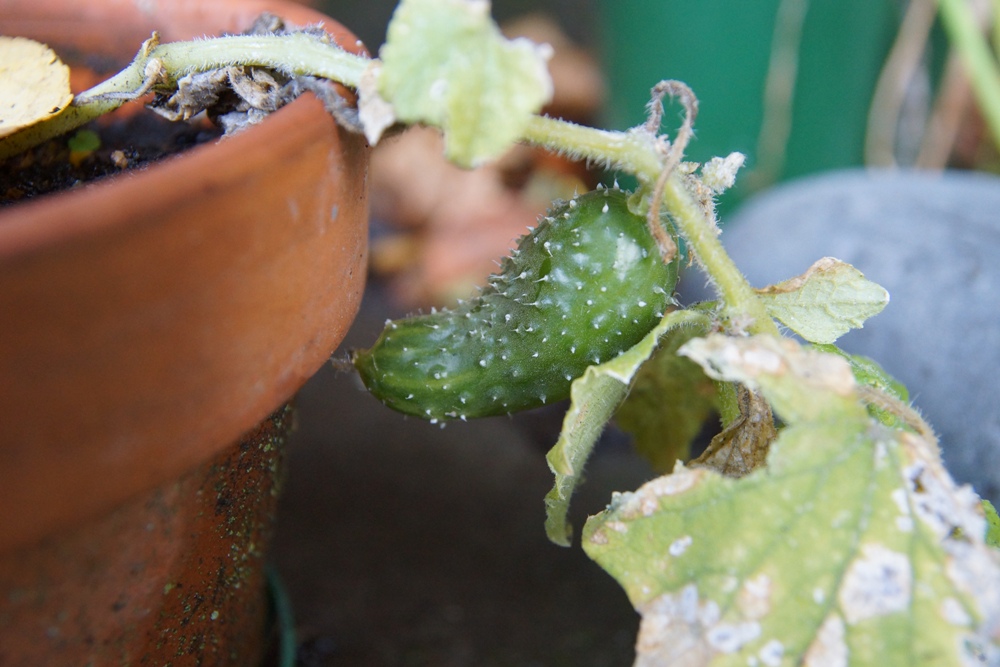 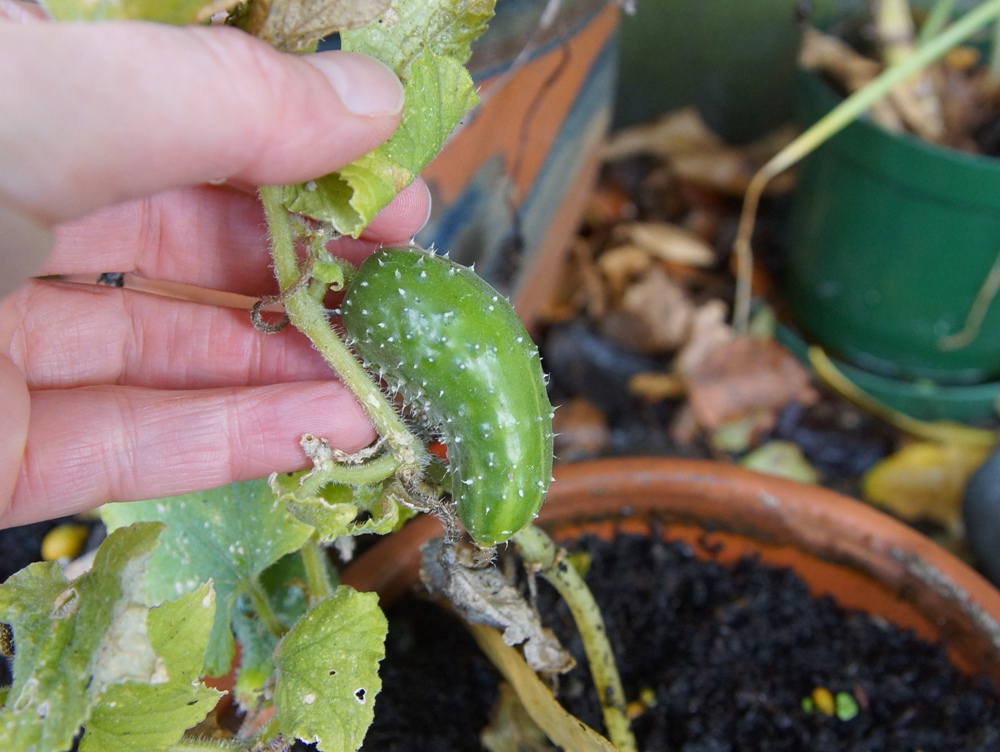 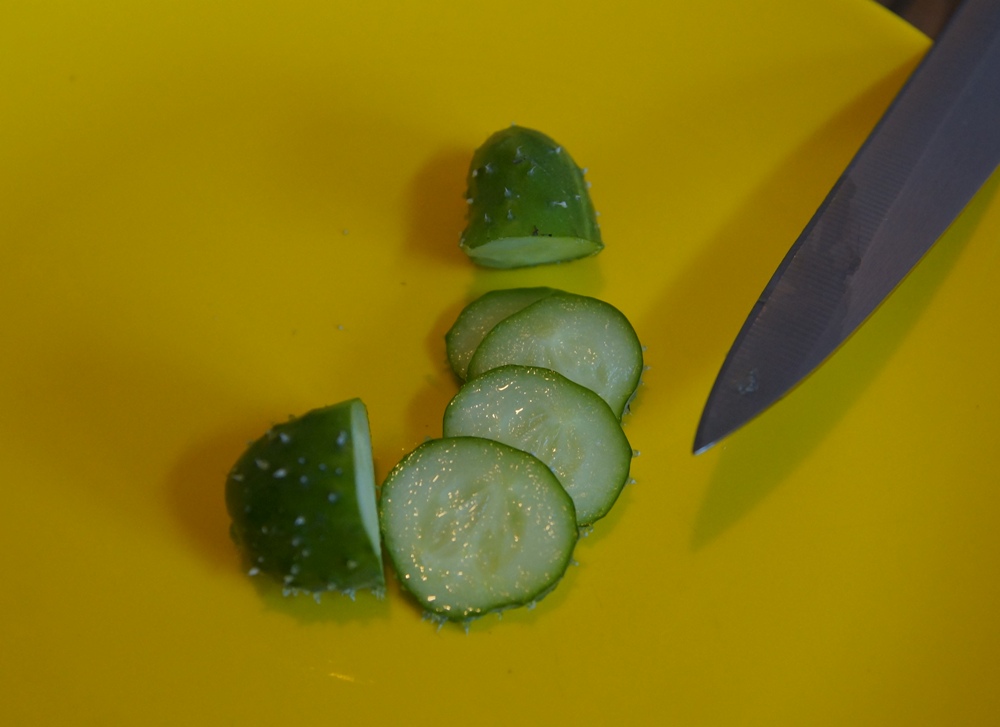 I can report that:

The other tiny cucumber has also made a brave attempt at growing, but only at one end.  One end of it is still the size it’s been for weeks, but the other end has fattened up and become quite spherical. 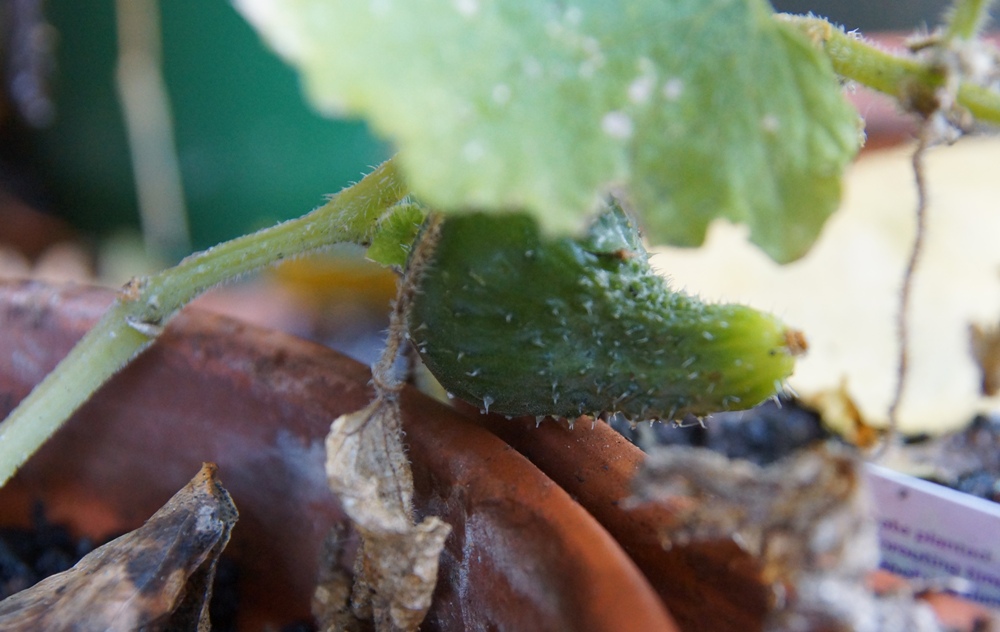 I decided to leave it on the vine as an experiment. By the time I get back from France, it will either have grown properly, or the entire plant will have withered up from the cold. But no matter what, at least I’ve proven that, against all likelihood, it is possible to grow a (very small) cucumber from seed in a small pot on the doorstep in Christchurch. Just don’t expect enough for a salad…

My experiment with vlogging seems to have been well received (although I did get a few comments that it was very long – I totally agree! I had to sit through the whole thing many many times while I was editing it, and it was way too long!). I even had two people subscribe to my YouTube channel! (Does this make me a proper YouTuber now that I have actual subscribers? Only about 999,998 subscribers to go before I can give up my day job…).
As a result, I’m going to try and film a few more vlogs (much shorter ones, I promise!) while we’re in France. I found an app that will let me do the editing on my phone (it can’t do as many fancy things as the one I was using on my computer, but can do the basic stuff), so that in theory I’ll be able to edit and upload videos as I go, which means they won’t end up in that infinite pile of travel photos and blogs I’ve never got round to editing/uploading from previous trips. No promises though – I may be having way too much fun just experiencing travel to want to document it. But keep an eye on my YouTube channel just in case 🙂
And for your amusement in the meantime, here’s a video of Parsnips I made while testing out video-editing apps:

hat I’d intended today was to spend a few hours in a relaxing game of Minecraft with the nephews.  What it turned into was a frustrating afternoon struggling to get the server to play nice.  Still, it was a lot of fun for the first hour or so, until the server crashed… Nephew #1 had…

ow, time has sped by again, and it’s already two weeks since my operation (and already September, and spring!).  I did mean to come back and write something more substantial than my brief post-op note of stillalivitude, but for the first week or so sitting at the computer was painful and not conducive to writing…

I really will get round to posting the rest of my travel journal entries, but life is kind of busy at the moment.  Work is hotting up as we get closer to our big launch, and study takes up most of my free time.  And this week I seem to suddenly have a social life…

y resolve about not taking on new things is weakening.  I was asked last night to step in as treasurer for my Toastmasters club, because our current treasurer has just resigned from the club.  My immediate response was that I definitely couldn’t do it after the start of July, because I’ll be studying, but the…

Seeing as the conference was on a Friday, I decided to stay up in Wellington for the weekend.  Discoverylover, as well as offering me a bed, arranged a bookcrossing meetup for the Friday evening, so after the conference finished I walked down to the railway station to meet up with her and the other bookcrossers…