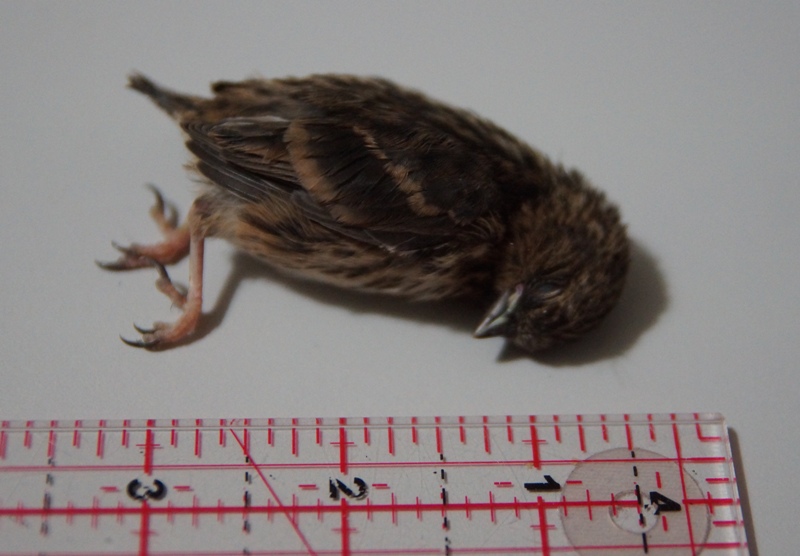 A very tiny (the ruler is in inches), and thanks to Parsnips, very dead, baby sparrow .
Actually, technically I was the murderer, as I had to break the poor wee thing’s neck. Parsnips brought it in a few minutes ago, and was happily tossing it around the study. It was very obviously alive, but not able to fly (I don’t know if it was ever able to fly – it looks like it’s barely a fledgling), and also obviously injured enough that rescuing it wasn’t going to be an option.  I felt horribly cruel killing it (with my bare hands, no less), but Parsnips is much too well fed to finish it off herself, so letting her keep playing with it was going to be the much crueller option.
Parsnips was very unimpressed with my act of mercy, and has stalked off back outside (I suspect to see if she can find any more baby birds to play with…)

nd… it’s not working.  The last of the computer parts arrived yesterday, so we (ok, mostly MrPloppy, with me looking over his shoulder going “ooh, what’s that wire for?” and occasionally actually being useful when my smaller hands could fit into tight corners his couldn’t reach) spent the afternoon putting it together.  And the build…

uite apart from the whole winning an award thing, yesterday was really interesting.  For a start, I got to go and visit (and even better, take some photographs of) the Canterbury Cultural Collections Recovery Centre.  The CCCRC is an amazing place – it’s a giant climate-controlled hangar that stores all the material from the various…

The new furniture arrived yesterday, so as promised, photos of the pretty: TV unit: Ok, so the furniture shop called it a bookshelf, but I couldn’t find a TV cabinet I liked, and this looked like it might work, which it does, perfectly.  I haven’t decided yet what to put on the lower shelves, and…

Got home this afternoon after 30-odd hours spent on planes and in airports.  I’m incredibly tired, but attempting to stay awake at least until dark, to ward off the worst of the jet lag. Italy was amazing (as was Greece, but I think I already posted to say that 🙂 ) and we had so…

while back I supported a kickstarter for a game called Machine of Death (based on the excellent book of short stories of the same name).  The kickstarter succeeded, and the game was duly produced and sent out, with a request from the creator (who writes the Wondermark comic) that people send him photos of the…