The mystery quilt has been handed over to its recipient, so now I can show it off here: 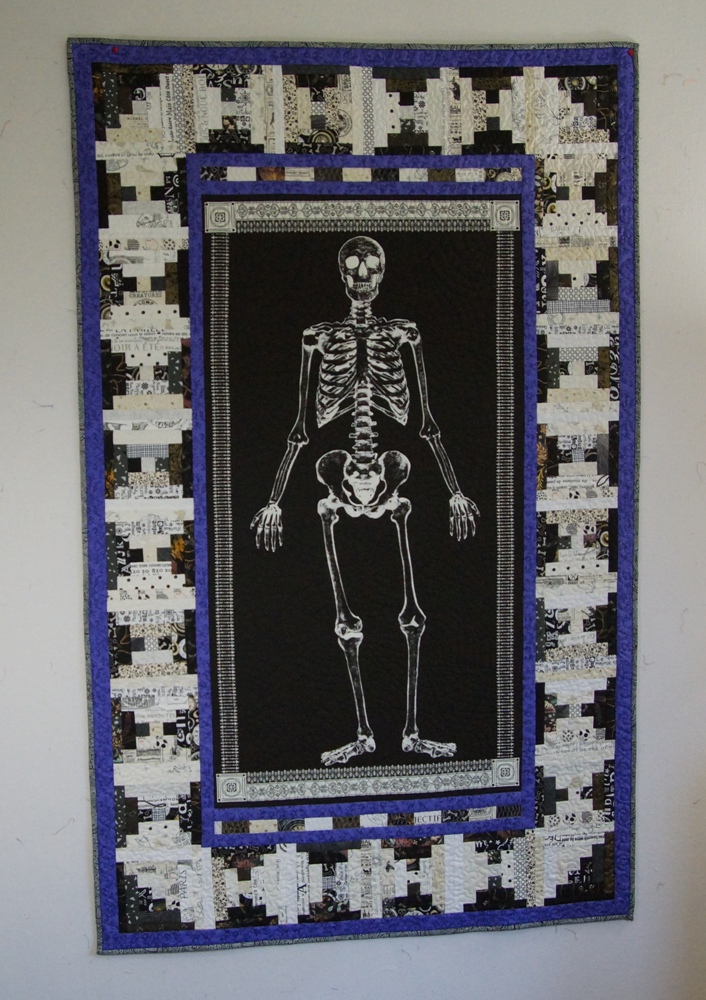 Given the subject matter, no prizes for guessing who it went to – Lytteltonwitch of course. When I saw the fabric (everything inside the inner purple border is a single panel of fabric) I knew I had to turn it into a quilt for her.  The big challenge was to finish it in time for Halloween, especially as I was running short of weekends in October (next weekend is the NZ/Aus Bookcrossing convention, and this weekend I was supposed to be spending most of on a couple of long walks as part of the Walking Festival, but the weather has reverted to winter again with heavy rain all weekend, so the walks got cancelled and I was left with a free weekend, which is really the only reason I managed to finish the quilt off yesterday).
The patchwork itself isn’t particularly complicated (the border is made of Courthouse Steps, with Log Cabins on the corners, which are both pretty simple blocks), but it’s the first time I’ve really done multiple borders (I don’t count the added-at-the-last-minute borders on the Flower Garden quilt, because I was very much making them up as I went along – this time I actually planned the borders in advance and worked out all the measurements so everything would fit).  In the process, I learnt that my quarter-inch foot doesn’t actually sew an exact quarter inch, although I don’t think it’s the foot at fault – I actually think my machine is slightly out of alignment.  It’s only out by about a millimetre, which isn’t a huge issue most of the time, but when you add all the millimetres in all those Courthouse Steps up, it was out by about an inch in the total length.  Which meant I had to trim the blocks next to the corners quite a bit to make them fit properly, so some of the “steps” are very narrow compared to those around them.  Luckily though it’s not really noticeable unless you know what you’re looking for, so it doesn’t spoil the quilt overall.  I’ll just have to keep the not-quarter-inch thing in mind next time I’m doing a quilt where the measurements are so crucial.
As I mentioned, I’m really proud of the quilting on this one, because I didn’t use an overall design, but quilted different sections differently so that certain parts would stand out more.  Most importantly, I stitched an outline around the skeleton, then (other than a few internal lines to keep the batting stable) left the skeleton itself unquilted, with dense quilting in the background (spiderwebs, of course 🙂 ), which makes the bones really stick out. It’s a bit hard to see in the photos, but in person it looks quite 3D. 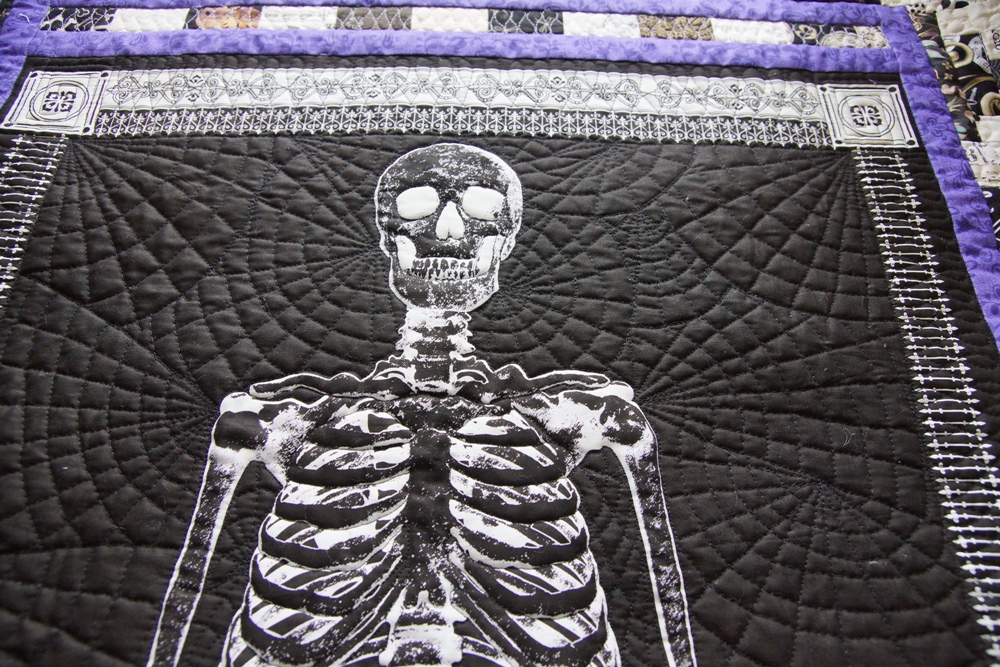 I did something similar with the borders, using dense and sparse quilting to increase the contrast between the dark and light steps.  I also changed the thread colour between sections, again to keep the contrast nice and clear.
You can get a better idea of how I did the quilting by looking at the back of the quilt: 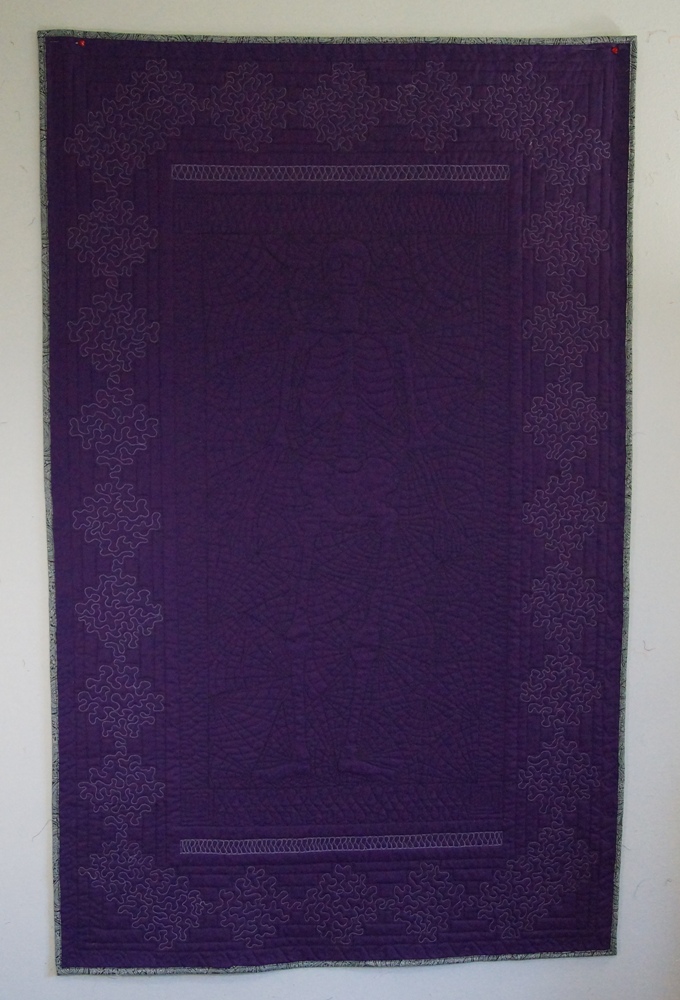 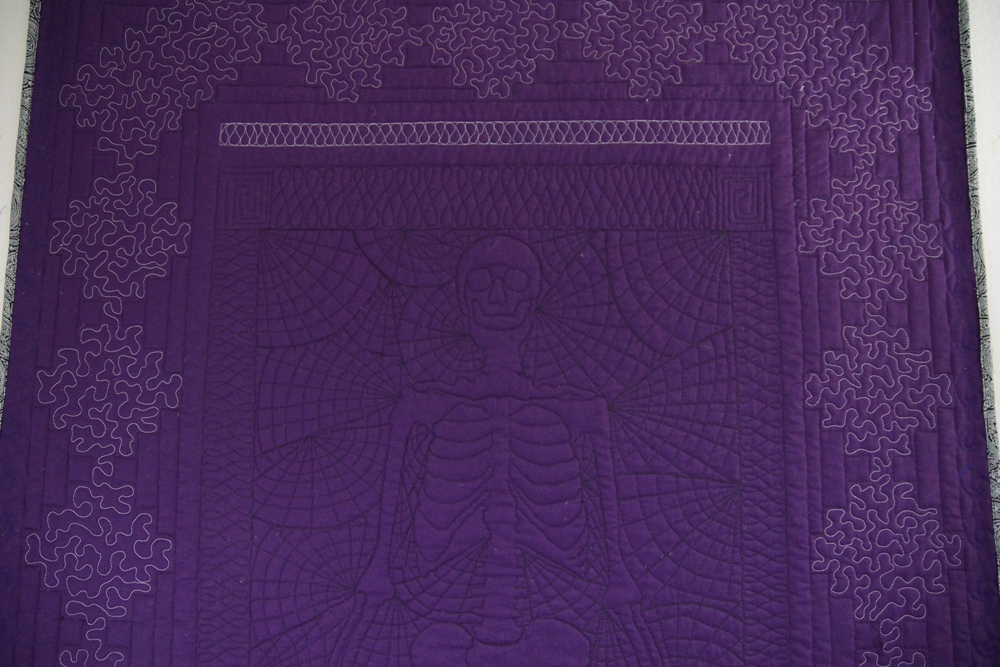 The difference to the final product between doing elaborate quilting like this and just doing an overall design is subtle, but I really like how it came out.  And, as always, I learnt a lot in the process.  Every quilt I make expands my repertoire of skills a little bit more.
Needless to say, Lytteltonwitch was very happy with her gift 🙂
Oh, and the skeleton glows in the dark…

I went last night with Lytteltonwitch to see the film adaptation of Margaret Mahy’s The Changeover.  I’m not sure what I thought of the movie as a whole, because it was filmed in post-earthquake Christchurch, so (just like the first time I saw the Lord of the Rings movies), seeing so many familiar places on the big screen distracted me from the actual film (I think the same was true for most people in the audience – I kept hearing whispered comments from around the theatre of “Hey, that’s…”).  I’ll probably have to see it again to judge it properly.  But a few (spoiler-free) initial thoughts:

So yeah, I need to see it again (and probably read the book) to really decide whether or not I liked it.  If any of you (especially the foreigners) get to see it, I’ll be really interested to hear your thoughts.

Wellington’s famous wind has been blowing madly all night – according to the Met Service it’s currently gusting up to 98 km/h, and I reckon that’s died down a bit from what it was doing earlier.  My room is on the top floor of the hostel, so as well as the whistling of the wind…

I managed to find a plumber who came with good reviews, and he was even available to come and look at the leak this morning.  Wonders will never cease!  He had a look at the leaking pipe, and confirmed that yes, it is leaking, but that it needs some parts that he didn’t have, so…

I’m glad I decided to stay up here for a few days instead of heading straight home yesterday (although I did miss out on the fun of showing off our award to all our colleagues). I’m having such a lovely relaxing time, with no particular plans, just wandering around, looking at stuff that takes my…