DD was down for a couple of weeks, and it’s amazing how much the urge to blog strikes when you don’t have a platform!  Of course, now that it’s back, I can’t remember any of the stuff I wanted to write about, so I’ll have to content myself with pretty pictures of crafty things I got up to over the past couple of weekends.
First of all, I finished the banner of birds for the back of my Birds in Flight quilt!

Now I just need to add the rest of the backing, and then figure out how I’m going to quilt it…
In the meantime, I ignored all the other half-finished projects piled in the corner, and started something new. This one was a pretty quick project – I managed to sew the (lap-sized) top over the space of a couple of days.
The technique is called “disappearing nine-patch”. It starts with a “layer cake” of 10-inch squares (this is not strictly true, it could actually be made out of any fabrics, but the layer cake was one of the ones I’d bought on sale and wanted an excuse to use, and it happened to have exactly the right proportion of light to dark fabrics). 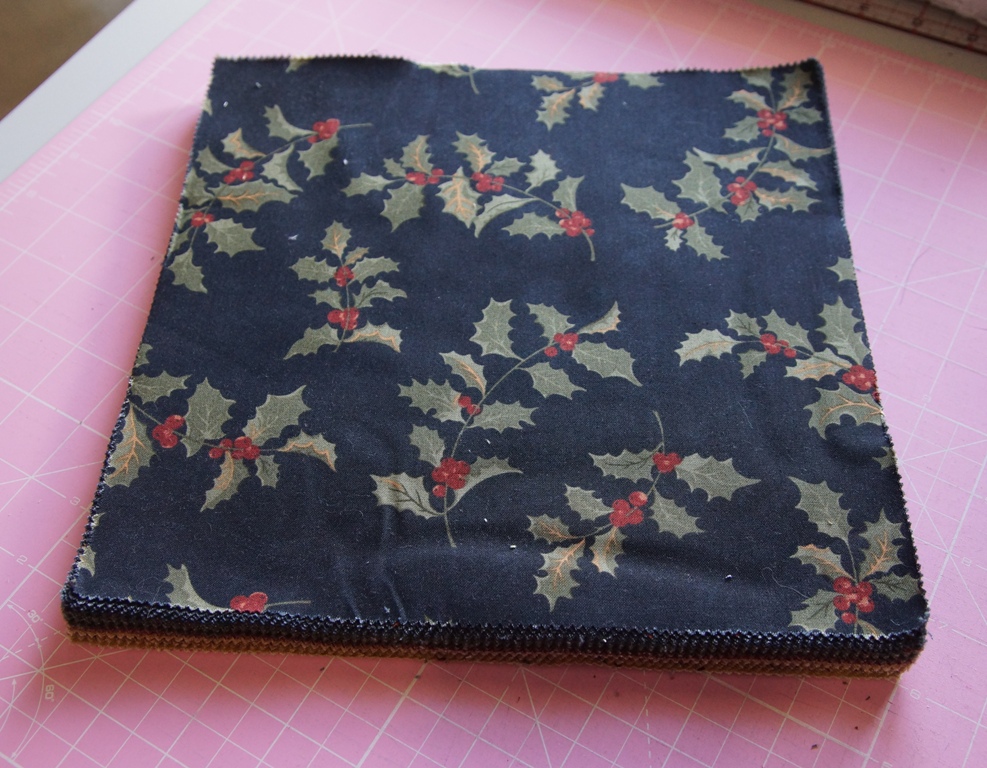 The fabrics sorted (approximately) by colour (to try and keep the distribution reasonably even) and cut into 5-inch squares: 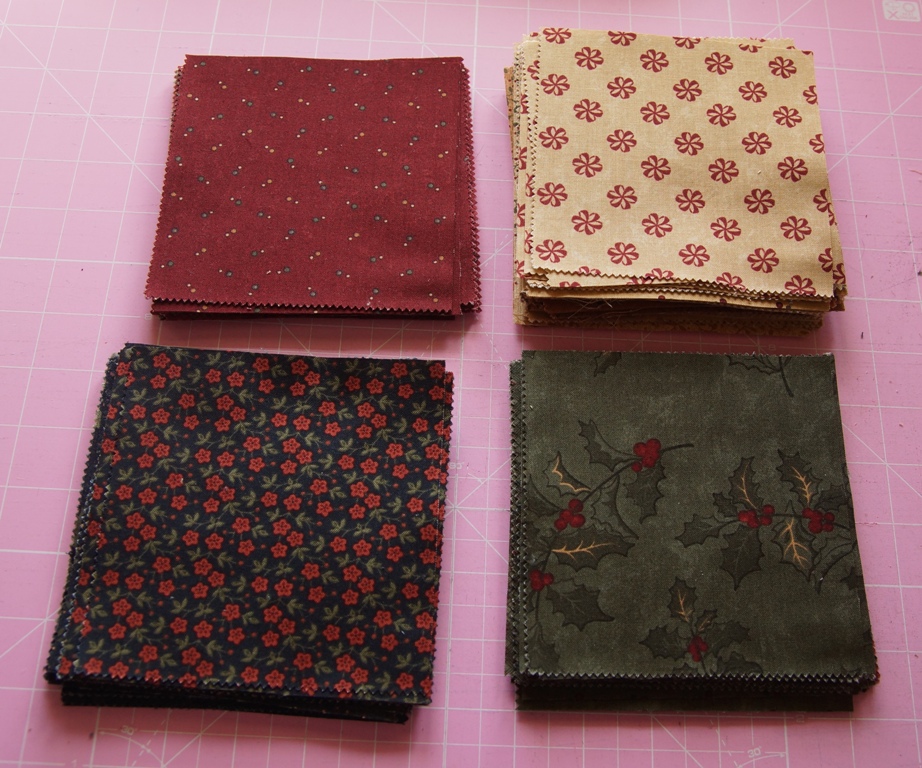 And then arranged into sets of 9, alternating dark and light: 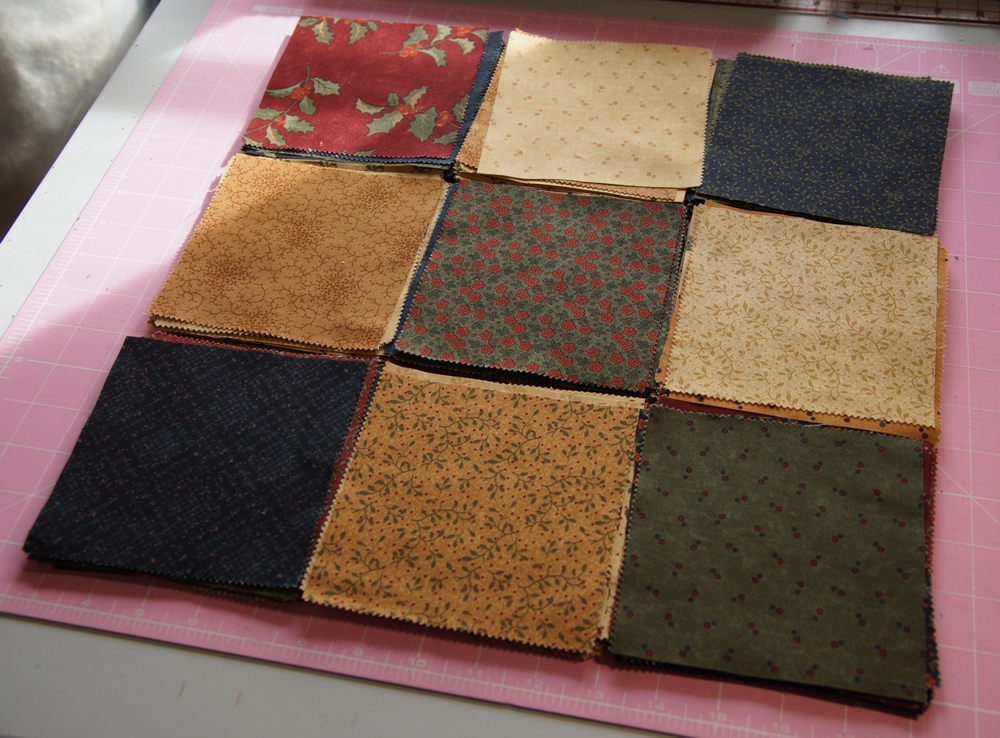 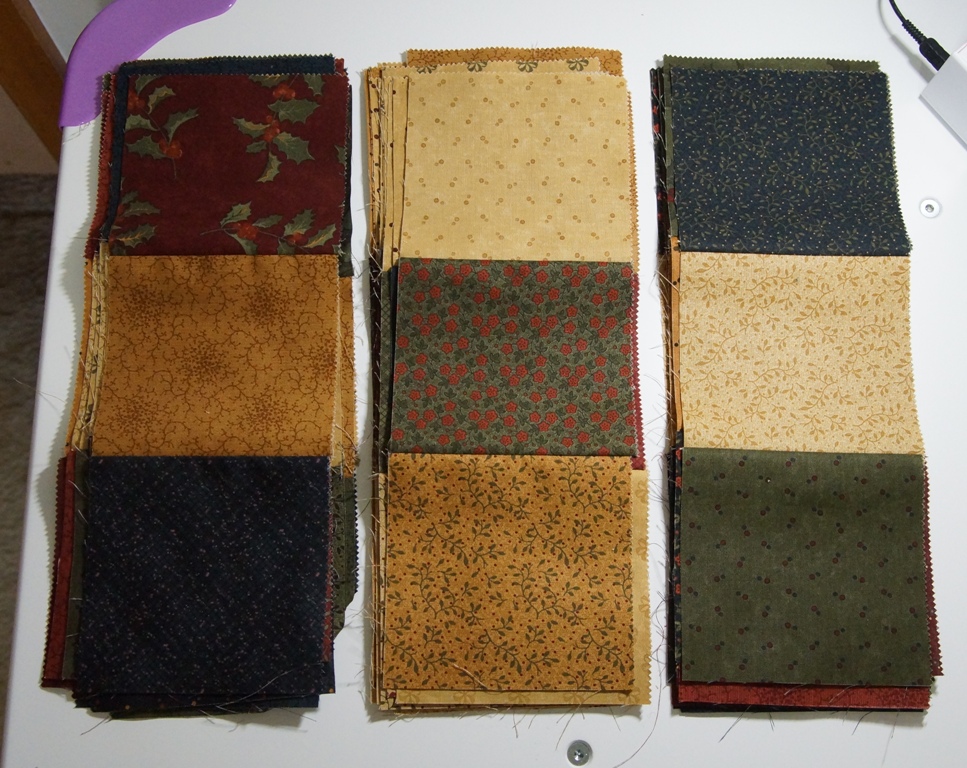 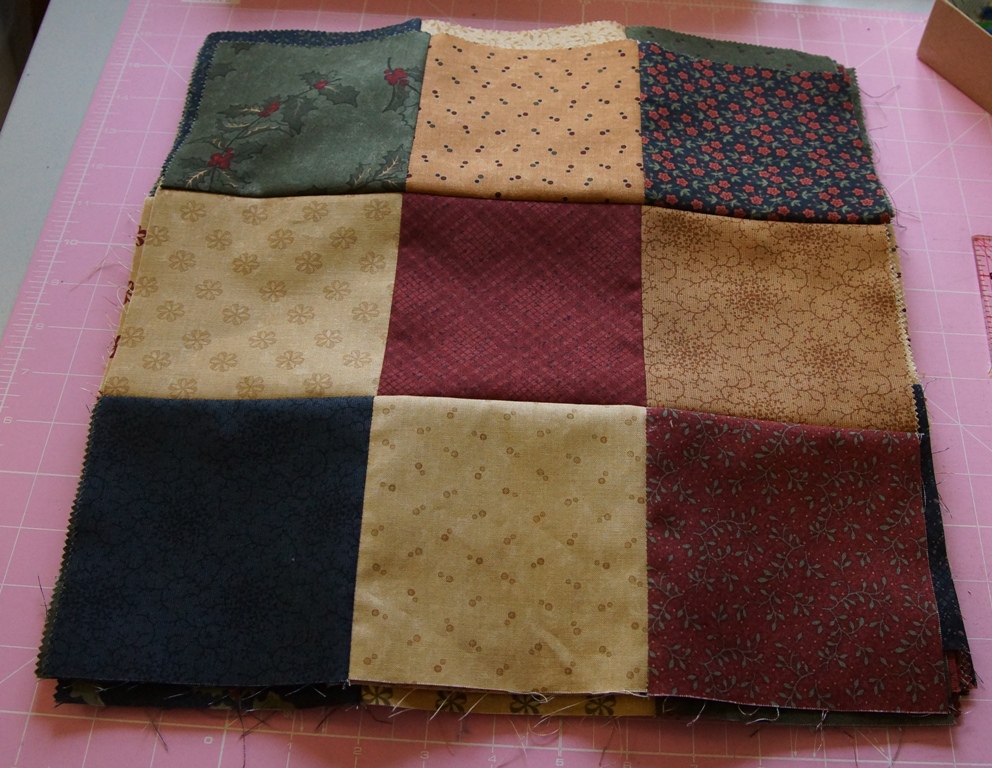 So far, so boring. But then, you cut the nine-patch into quarters, and get much more interesting blocks as a result: 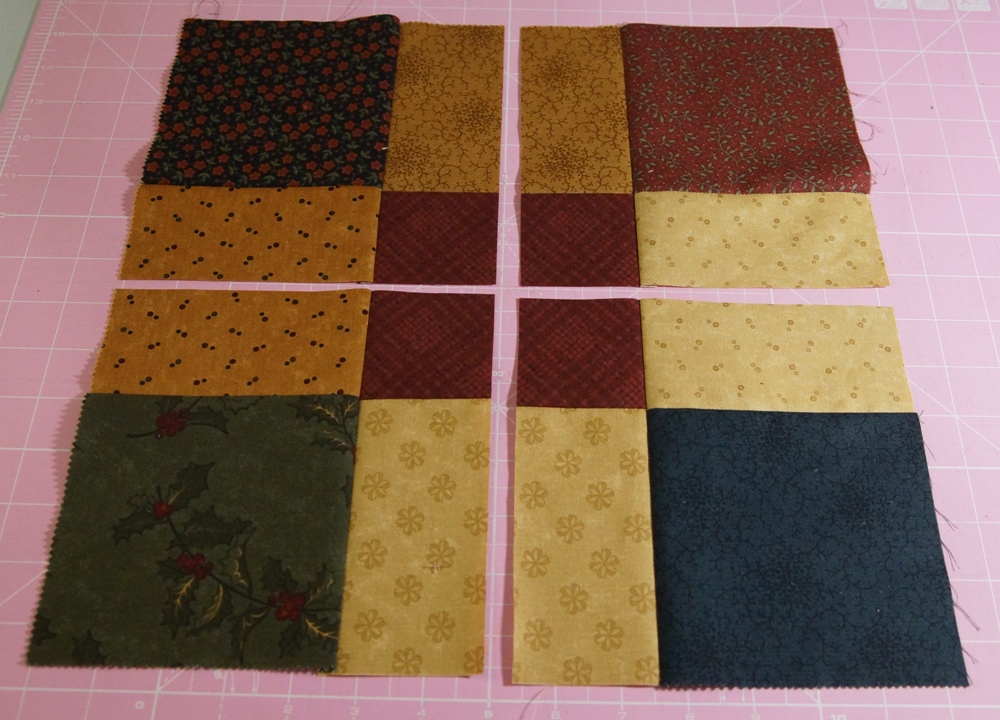 Which can be put together in all sorts of interesting ways, but the one that most inspired me was matching the small corner squares to give the illusion of a third large square hiding behind each pair of bigger squares: 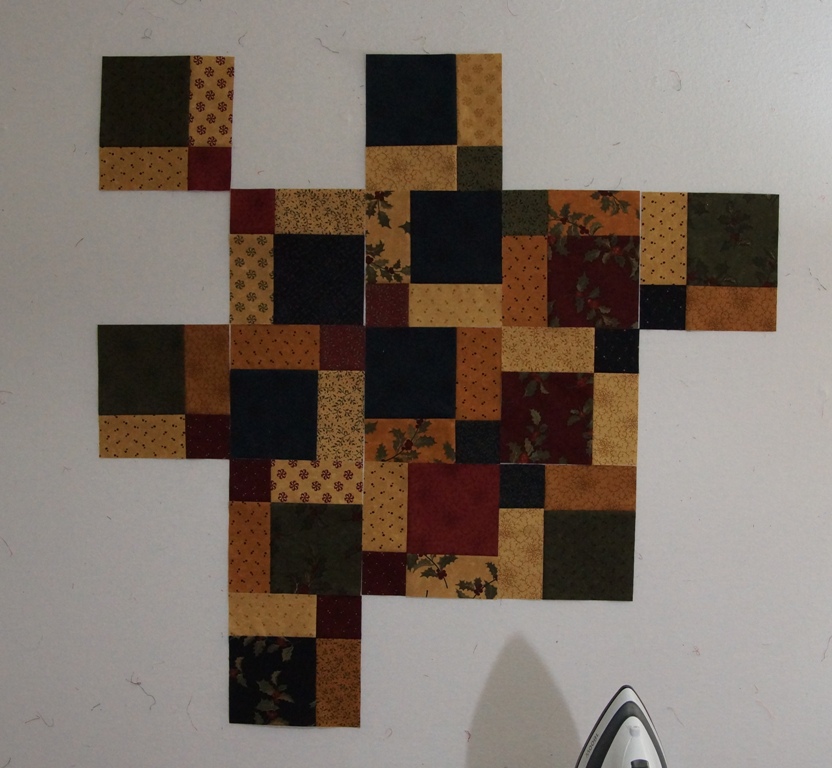 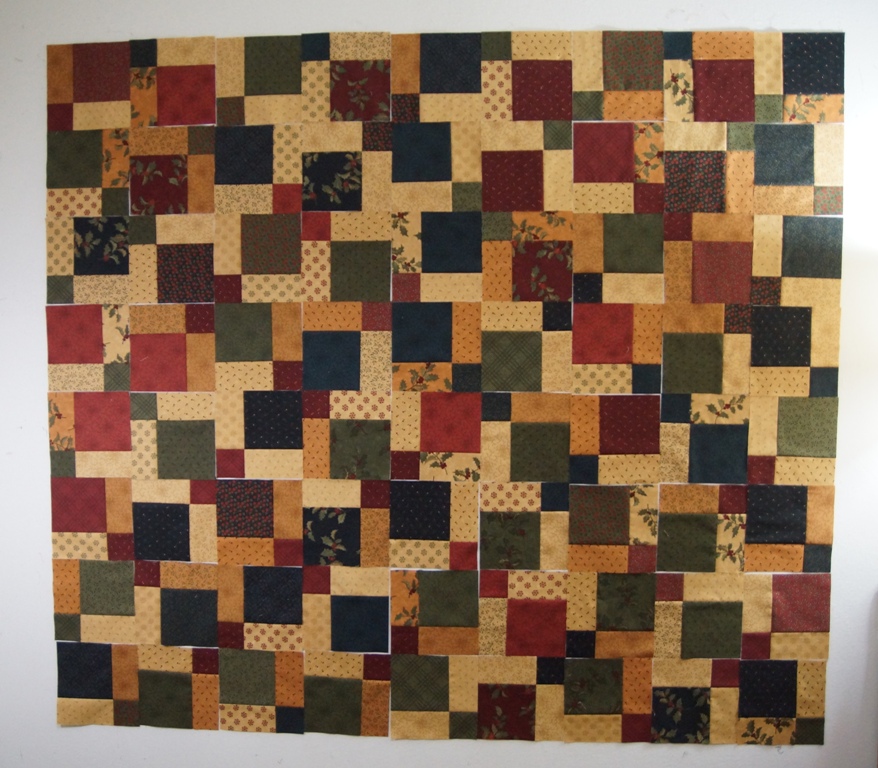 This was as far as I got the first weekend. It sat on my design wall for the rest of the week, and every time I went into the study I’d tweak the blocks a bit more, trying to move them around so the colours were well distributed, and there weren’t too many identical fabrics in close proximity. Finally last weekend I got it to a point I was reasonably happy with, and finished sewing the top together: 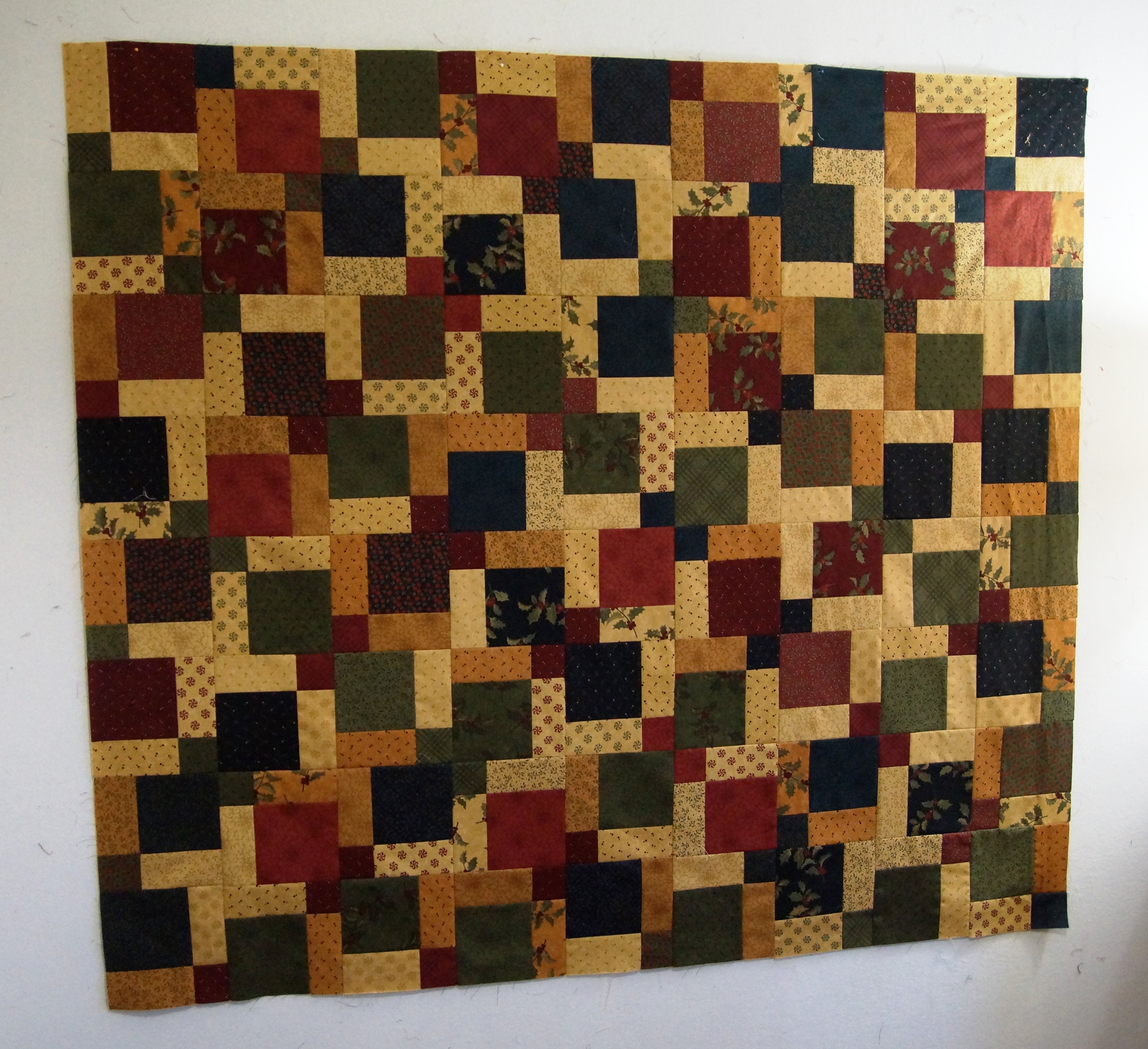 I’m quite pleased with how it’s looking. The fabric line is called “Holly Wishes”, so presumably it’s intended to be Christmassy, but it feels more like autumn to me (in person, it’s a little bit less yellow than in the photo – I took that late in the afternoon on a grey and rainy day, so it’s half artificial light). It was a really quick fun technique too – I might have to experiment with doing it again with other fabrics (I’ll add it to my very long list of quilt ideas I’m going to try one day…)
Of course, now I have to quilt it… or just add it to that growing pile of half-finished projects…

The predicted hot weather sort of arrived, except it was under a blanket of low cloud, so it’s been horrible and muggy again all day. I hate muggy weather – it’s so draining. Oh well, it’s starting to look rather stormy out there now, and the wind’s come up, so with any luck we’ll have…

(Yeah, when am I not busy?) After a nice quiet weekend, life has reverted to its usual whirl of activity (but it’s ok, it’s in a good way). Last week of term, so work has been the usual madhouse, of course, and it’s turning into quite a social week as well. On Monday night I…

So much for weather forecasts. The promised rain didn’t arrive the next morning, and in fact the clouds were beginning to clear as we set off to Milford. By the time we reached the edge of the bush the sky was almost completely blue, just the odd wispy cloud to make the scenery look even…

Spring has finally arrived, and against all expectations it’s actually feeling quite Spring-like. The weather was mild enough today that I was able to sit outside to have my lunch, and walking home tonight the air was full of the scents of blossom. There’s even a few daffodils springing up amongst the weeds in our…

Despite the late night the night before, none of us could really sleep, so we were all up pretty early Friday morning. After a leisurely breakfast of hot cross buns, and some juggling of the shower rota (we quickly discovered that our hot water cylinder only contains enough hot water for two and a half…