We were up and about way too early for breakfast again, so we decided to make the most of the fine morning and headed back up into the Aorere Valley to the Salisbury Falls.  The waterfall is quite a small one, but you could see from the surrounding rocks that it must be a different matter when it’s in flood.  The Aorere River itself (which the Salisbury feeds into) is similarly prone to huge floods, and in fact I’d seen a gravestone in the Collingwood cemetery the day before for someone who’d drowned crossing the river. 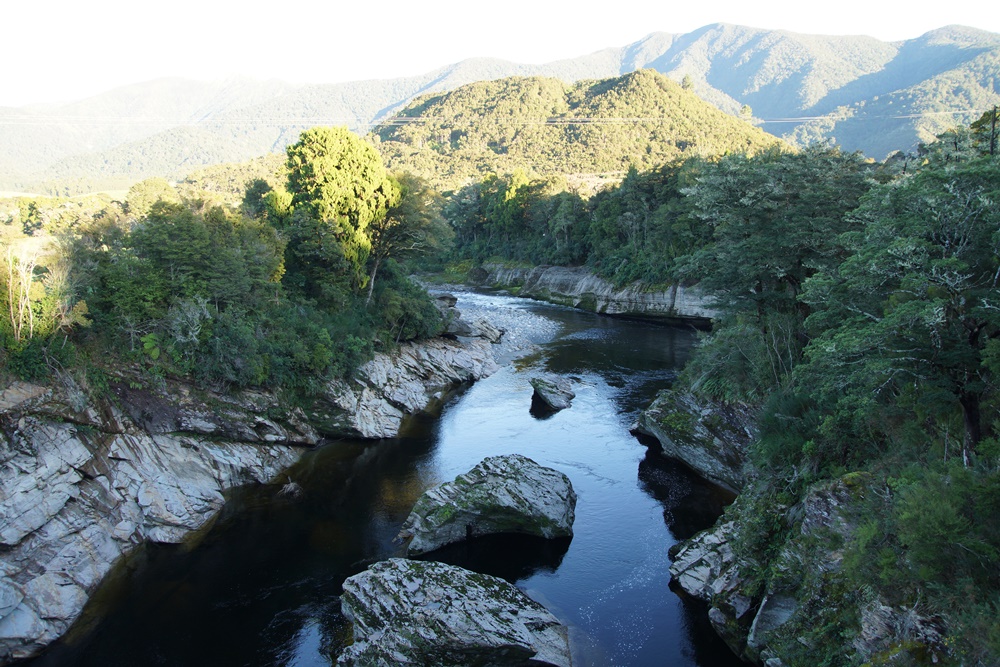 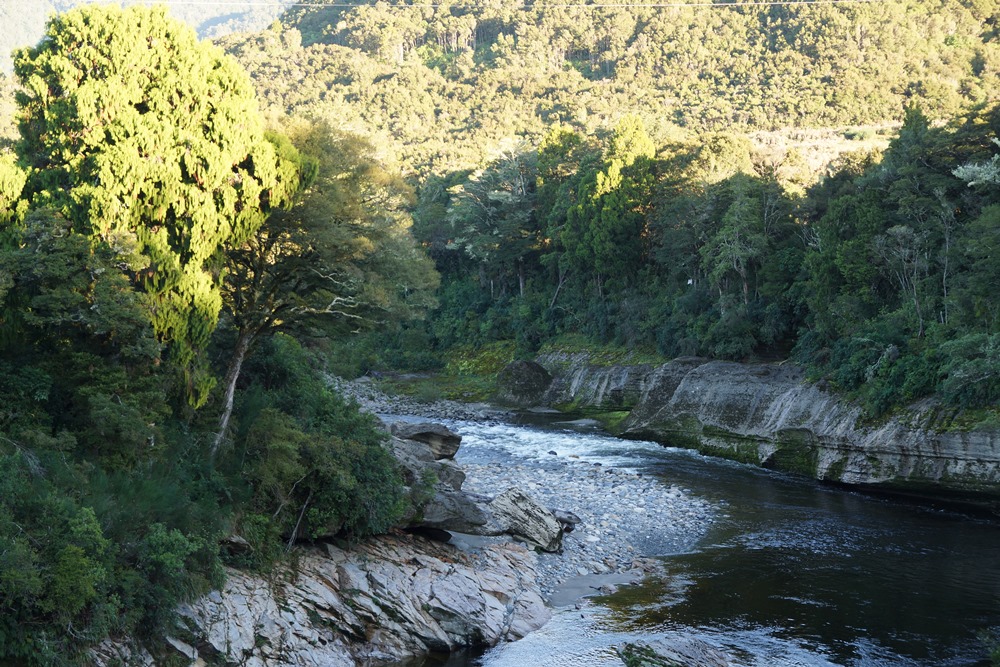 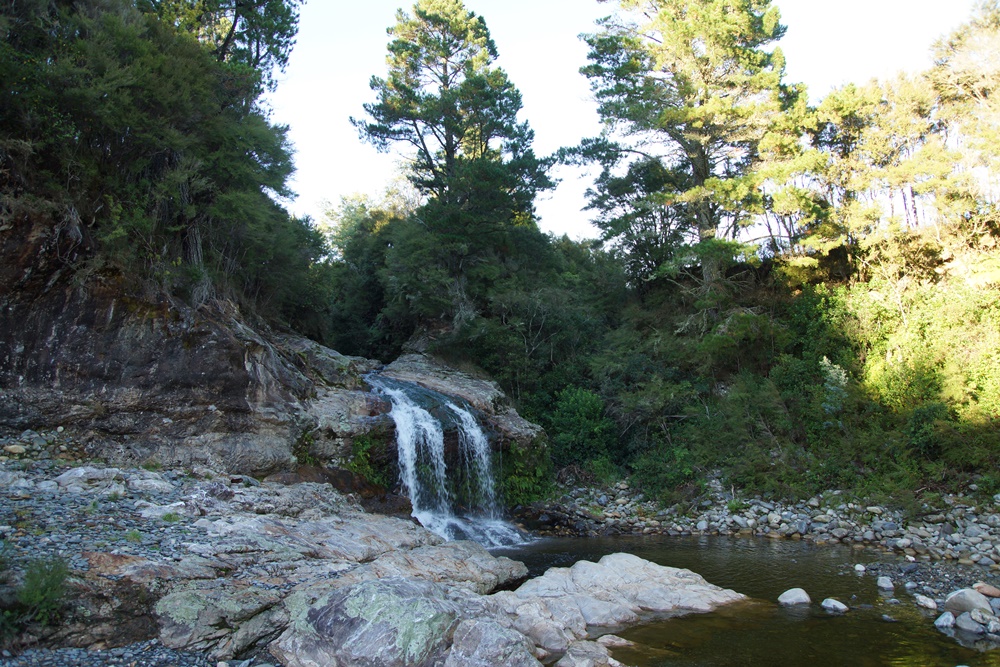 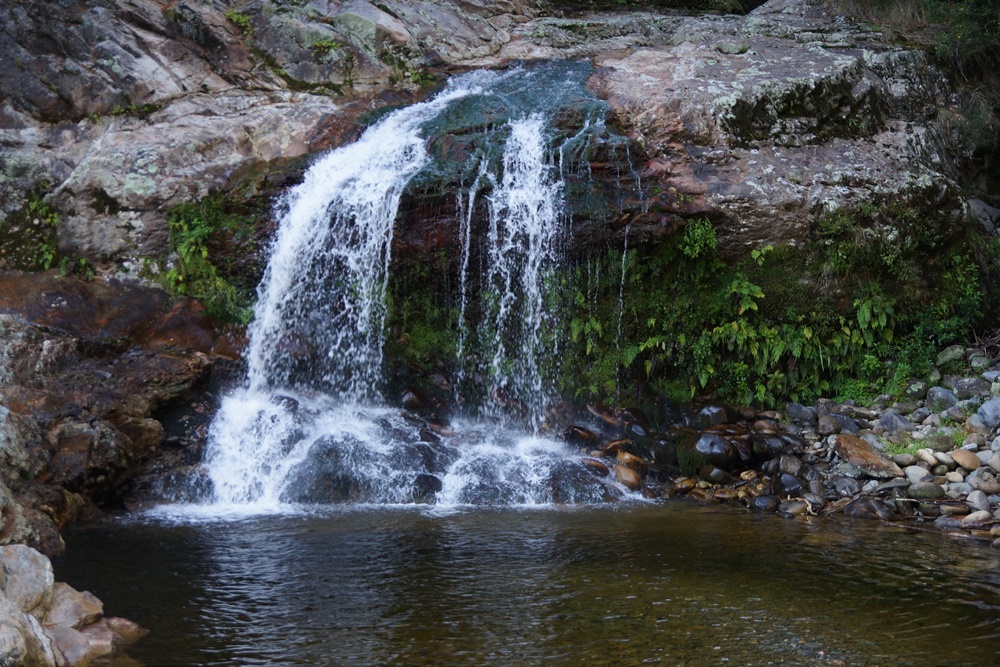 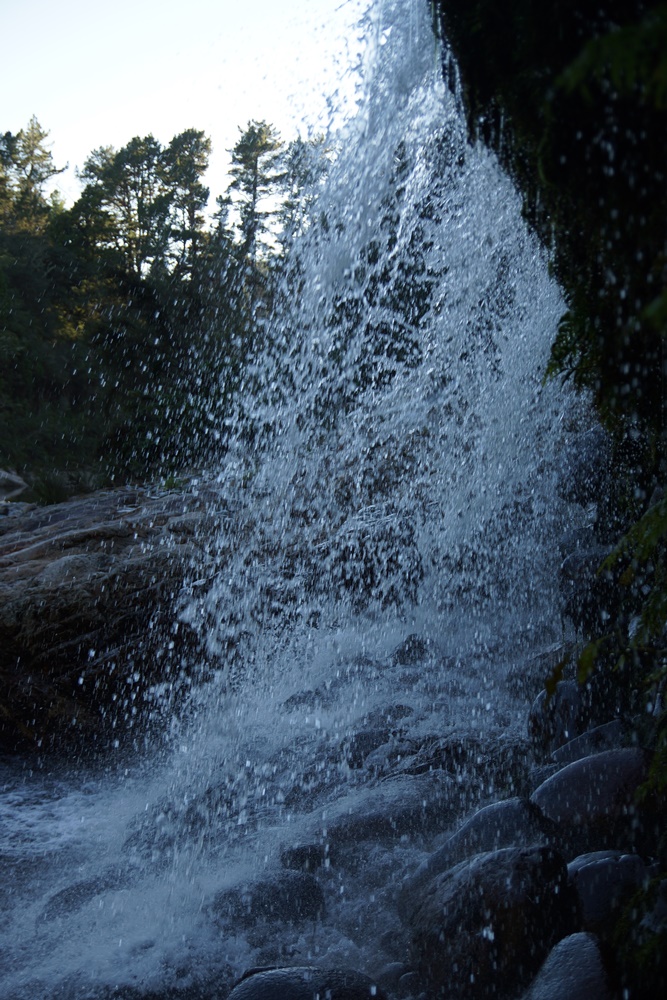 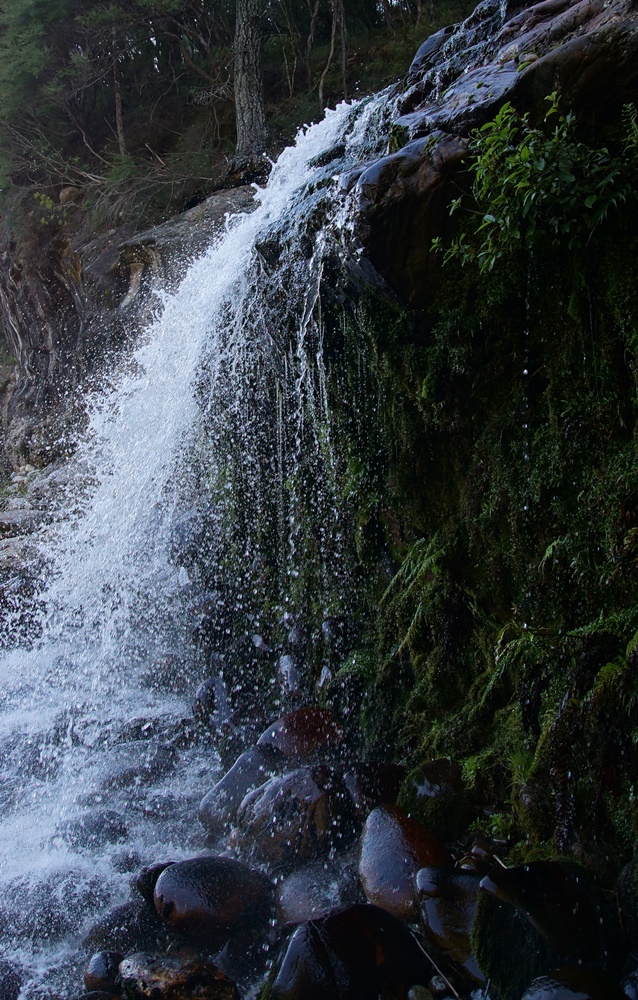 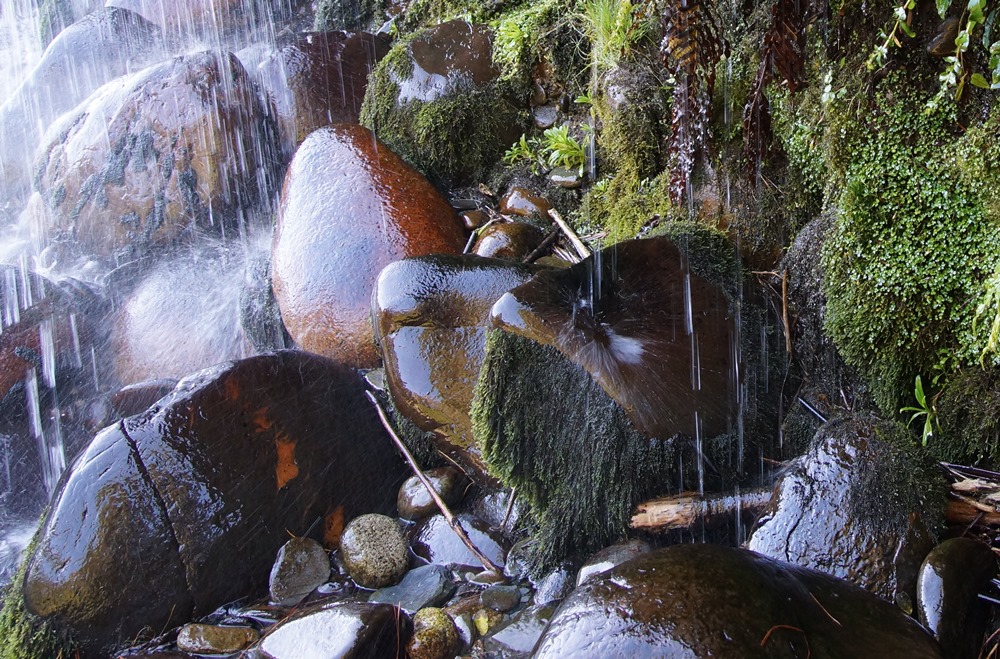 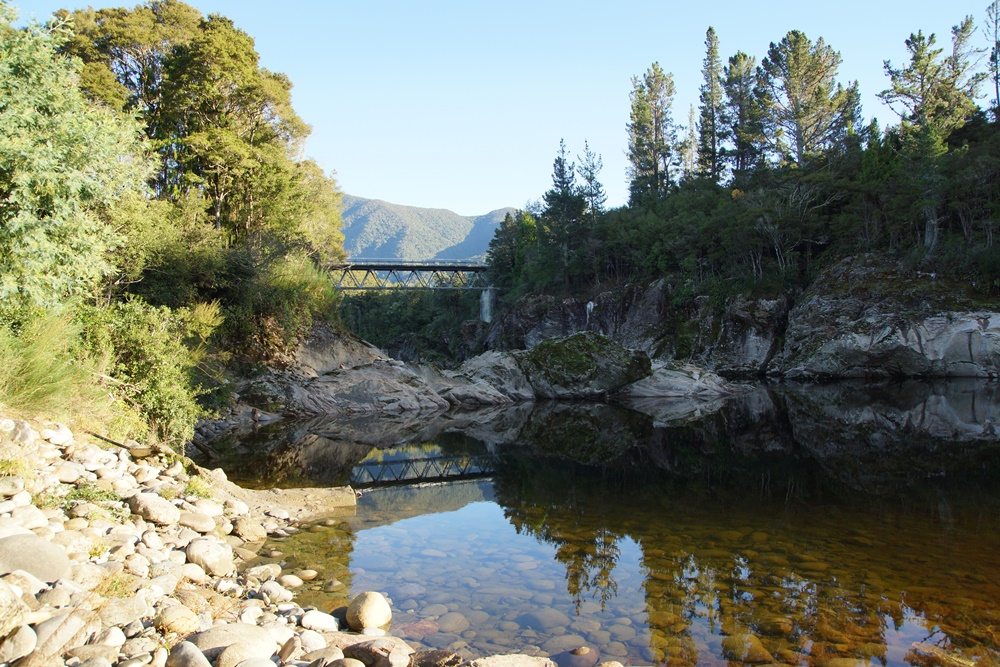 Clouds were beginning to gather around the hills to the west again, very much like they had on Saturday morning, so after breakfast we decided to head east out of Takaka and see where the road took us. We assumed it wouldn’t be very far, because the Abel Tasman National Park begins not far from Takaka, with the only way through (other than over the Takaka Hill road to the south) is on foot, a several-day tramp. But to our surprise although the sealed road ended pretty quickly, it was replaced with a narrow dirt road that went a lot further than we’d expected, and took us up over a steep hill to Totaranui, a gorgeous beach on the edge of the park. The beach was quite busy (by NZ standards – i.e. you could only get a few hundred metres away from other people) but so peaceful and relaxing to walk along, with the golden sands (which is how Golden Bay gets its name) and the sea on one side and the bush on the other – I could just feel all my stresses dropping away as I walked along. It was a warm enough day that if I’d had my swimsuit with me I think I would have even been tempted to brave the cold water (it’s still the South Island, after all!) and go for a swim, but I had to content myself with just paddling on the edge of the waves.
(So many photos, but I was fascinated by the contrasts between golden sand, green sea, blue sky and dark bush) 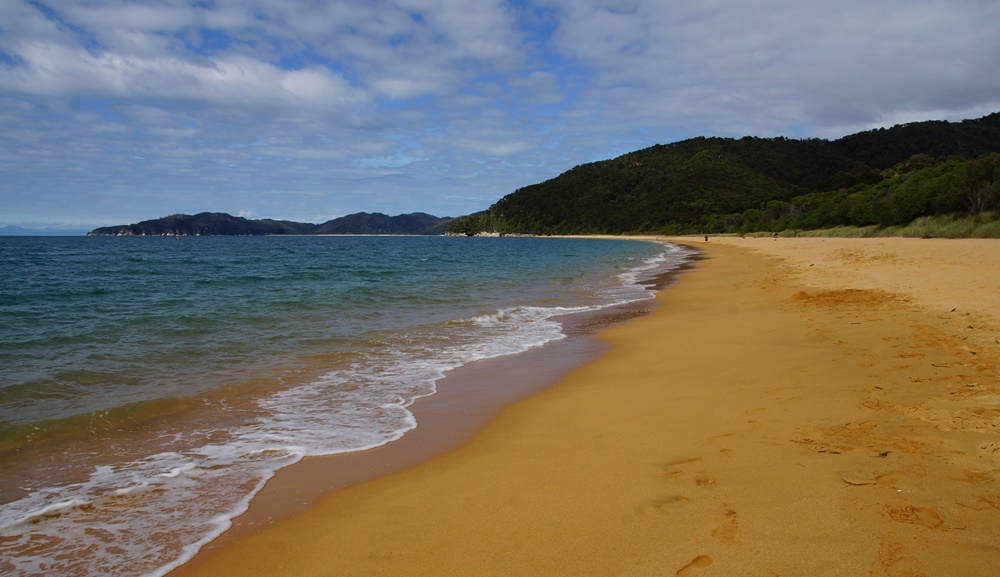 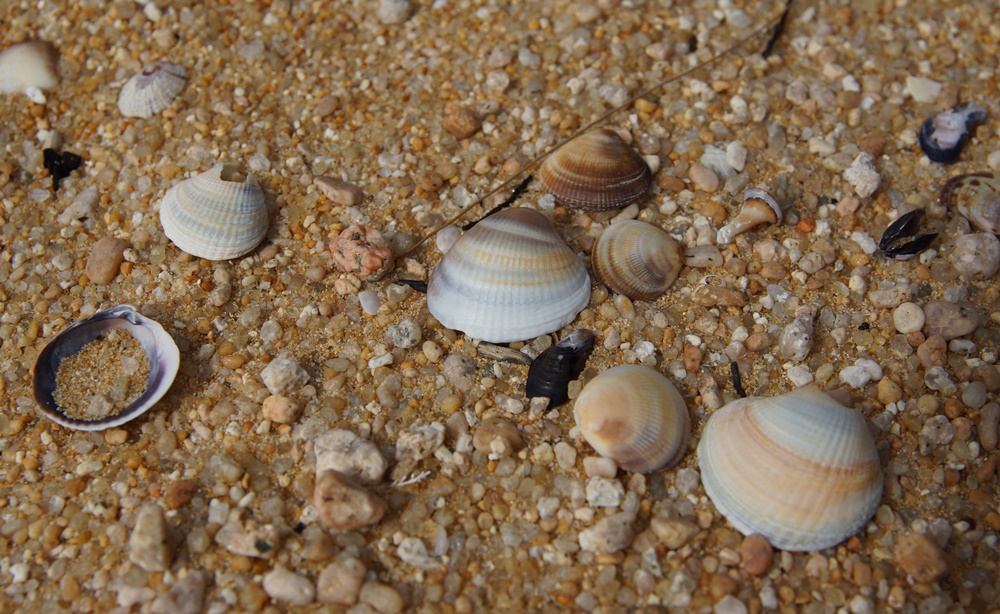 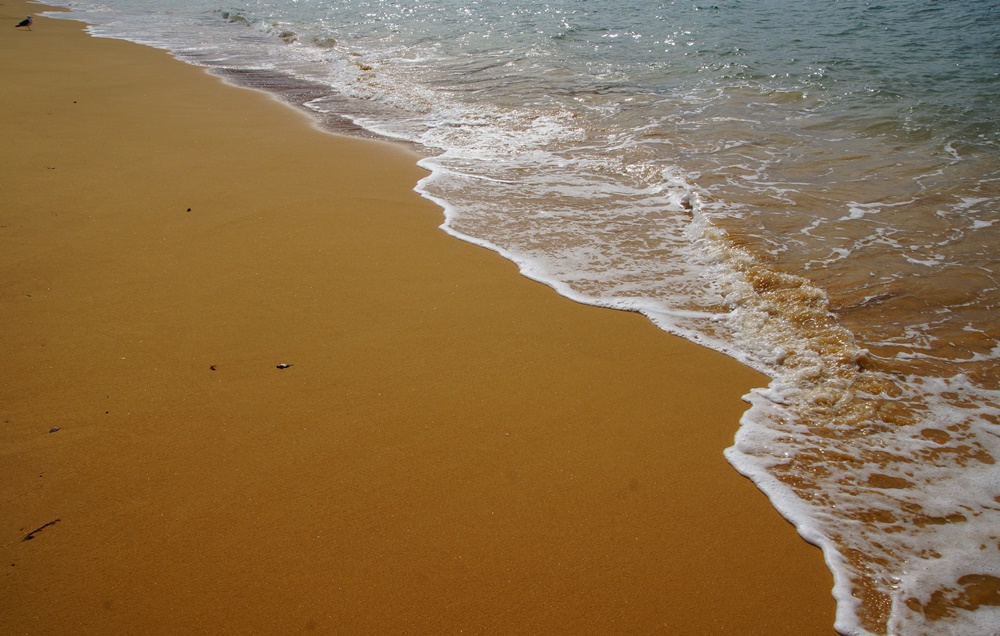 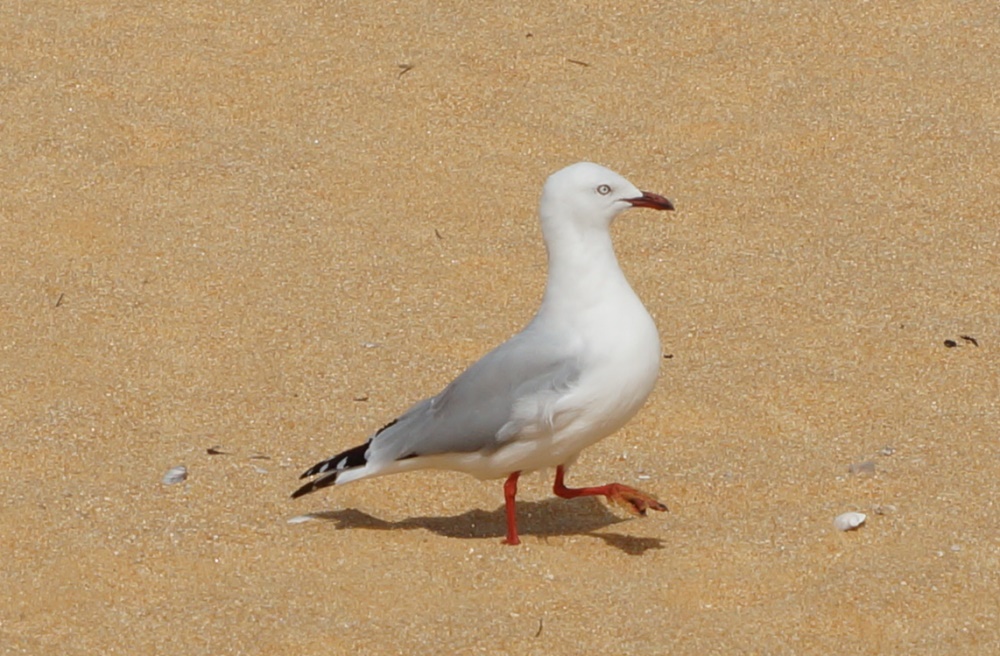 It wasn’t just humans enjoying a walk along the beach – red-billed gull. 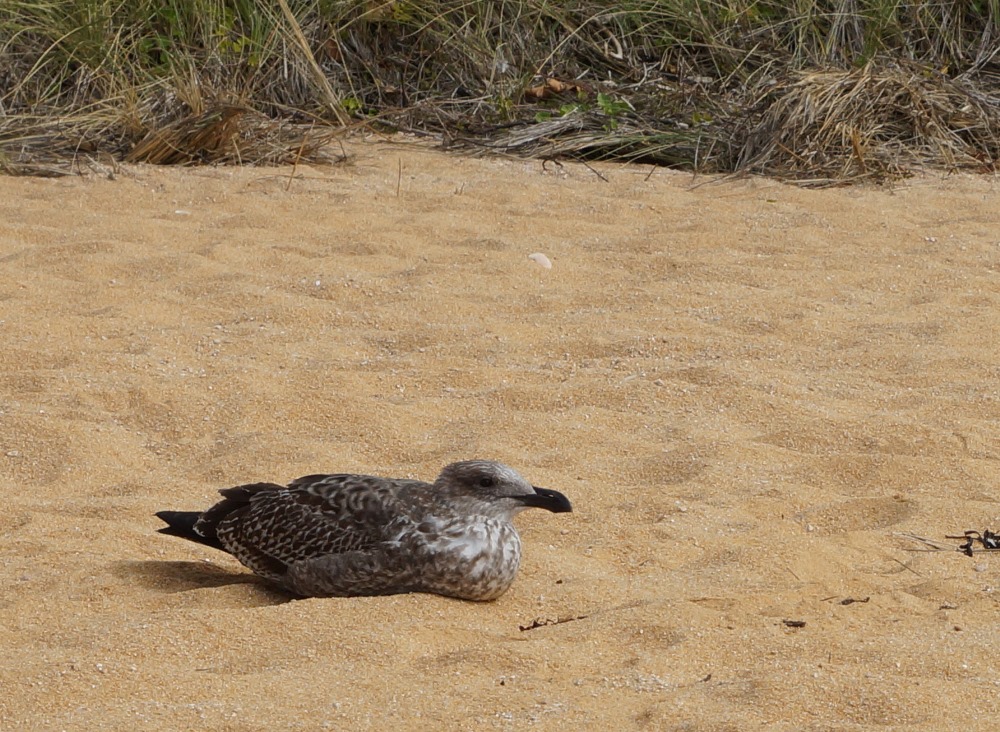 This guy was just chilling though – a juvenile black-backed gull. 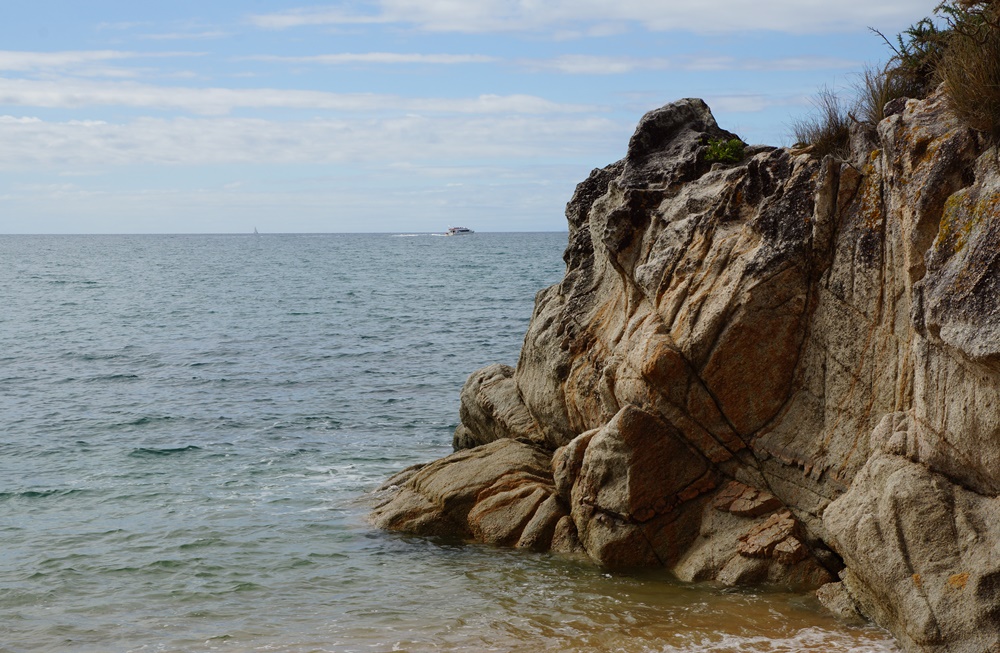 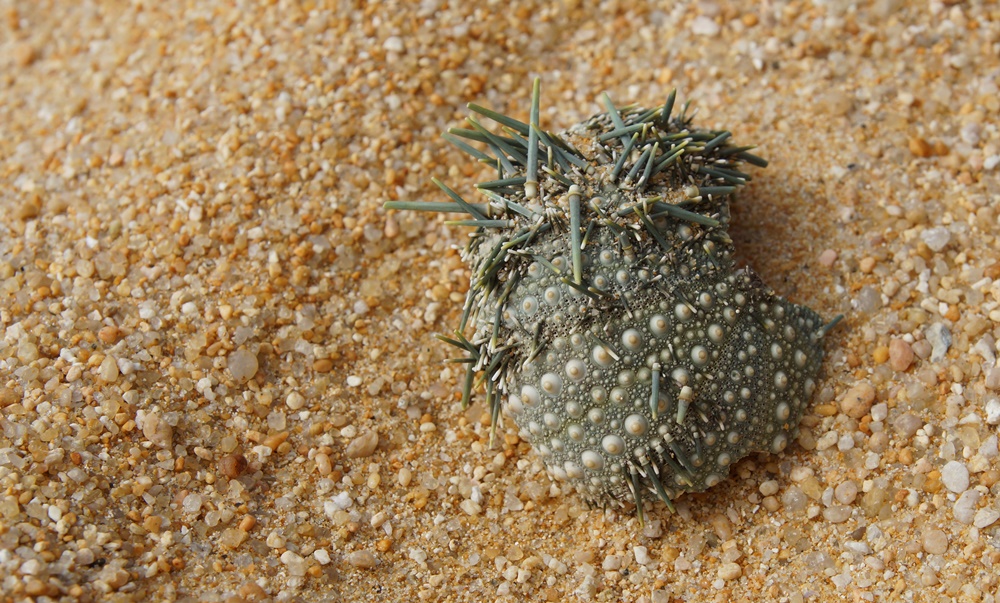 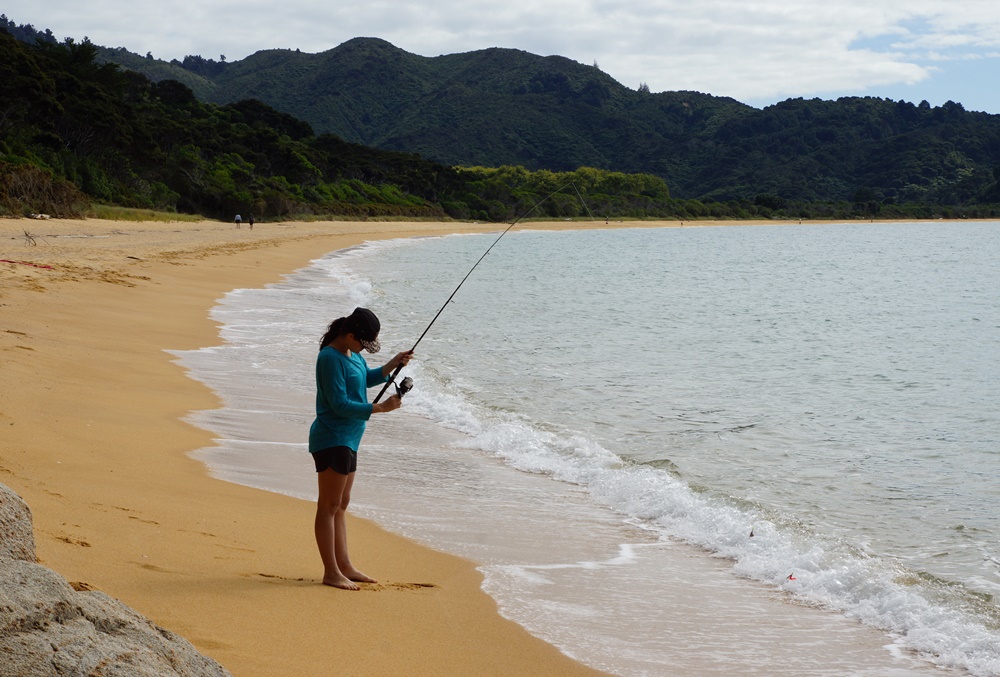 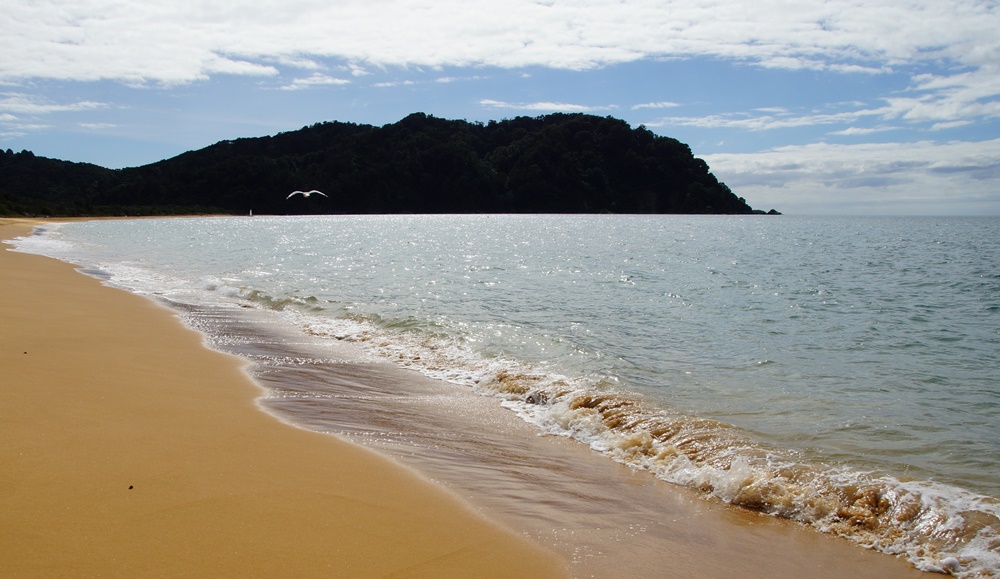 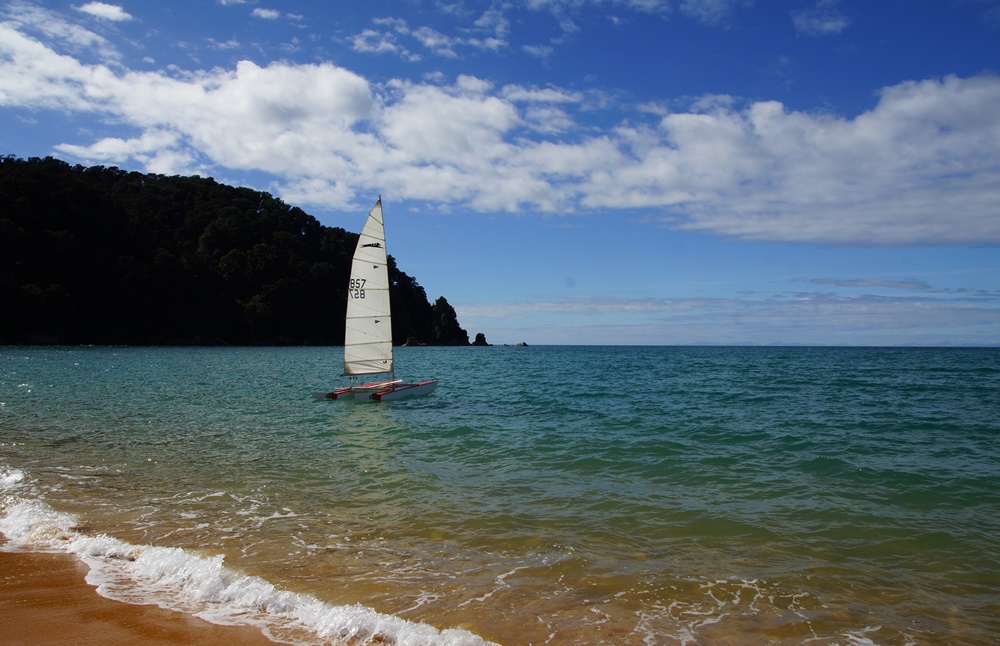 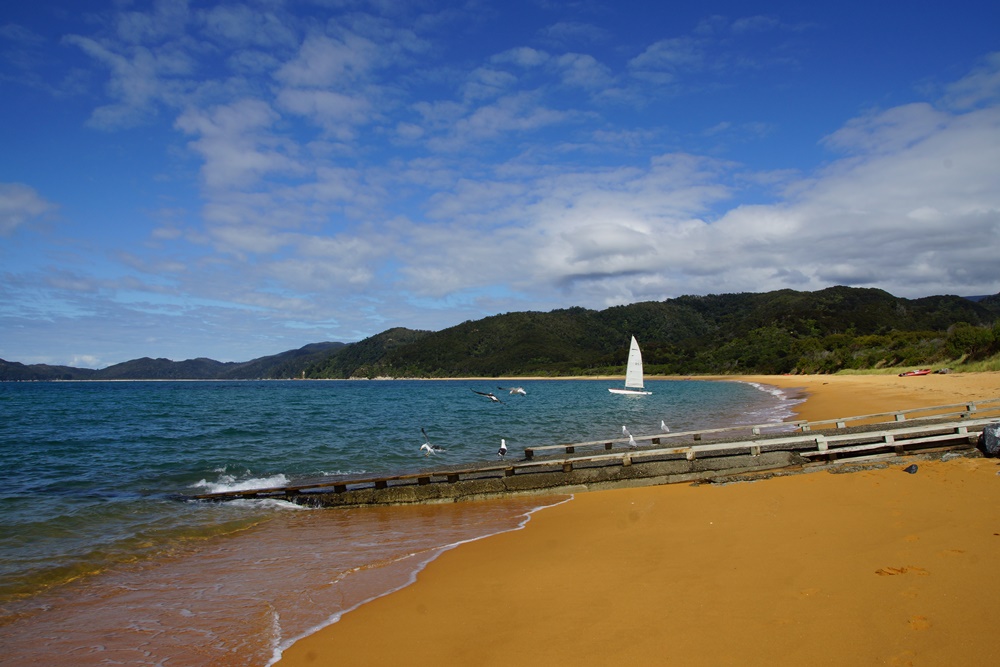 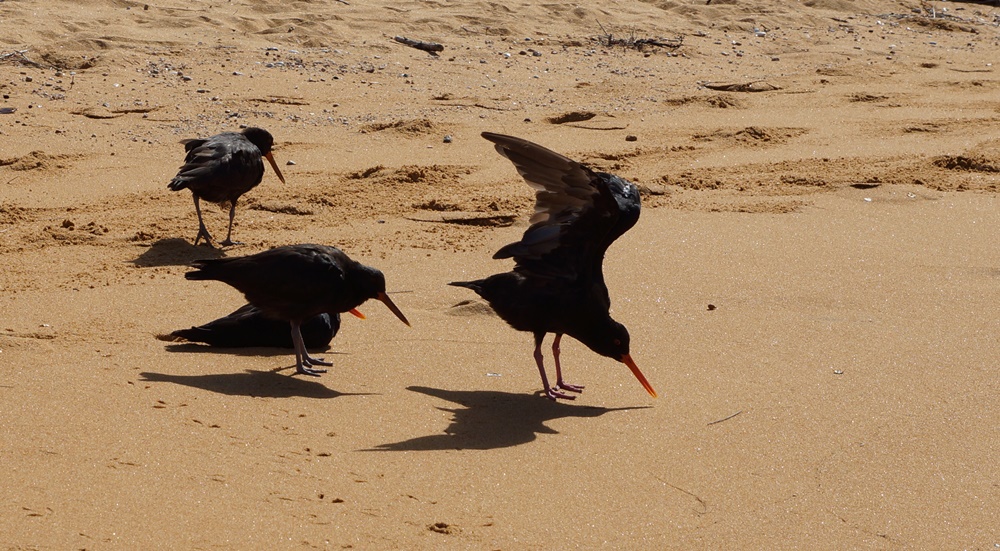 Oystercatchers
On the way back to Takaka we stopped off at another back-of-beyond cafe, a tiny place on top of the hill, down a driveway that was even narrower and steeper than the steep and narrow dirt road we were travelling on.  If we hadn’t had a huge breakfast, we probably would have stayed for lunch, because they were cooking wood-fired pizzas in an oven in the garden, but we were both too full, so just settled for a drink.  It was an amazing place, though – if I ever go back up to Golden Bay I’ll definitely have to go there for a meal.
At the bottom of the hill we picked up a hitch-hiker, a young French man who’d just finished walking the Abel Tasman Track. He didn’t speak very much English, but we managed to establish that he was in NZ for a year on a working holiday visa, and was working at an orchard outside Motueka. We couldn’t take him all the way back to Motueka, but we did take him as far as Takaka, where hopefully he’d be able to get a lift with someone going over the hill.
Back in Takaka, we decided to return to Pupu Springs to get a better look in the full light of day.  Of course, the viewing platforms were completely crowded with tourists, most of whom just took a quick look then went back to their cars – we stayed a lot longer, and were rewarded by seeing all sorts of wildlife in the springs, including eels and giant kokopu (a nearly trout-sized fish which amazingly is the adult form of the tiny whitebait). 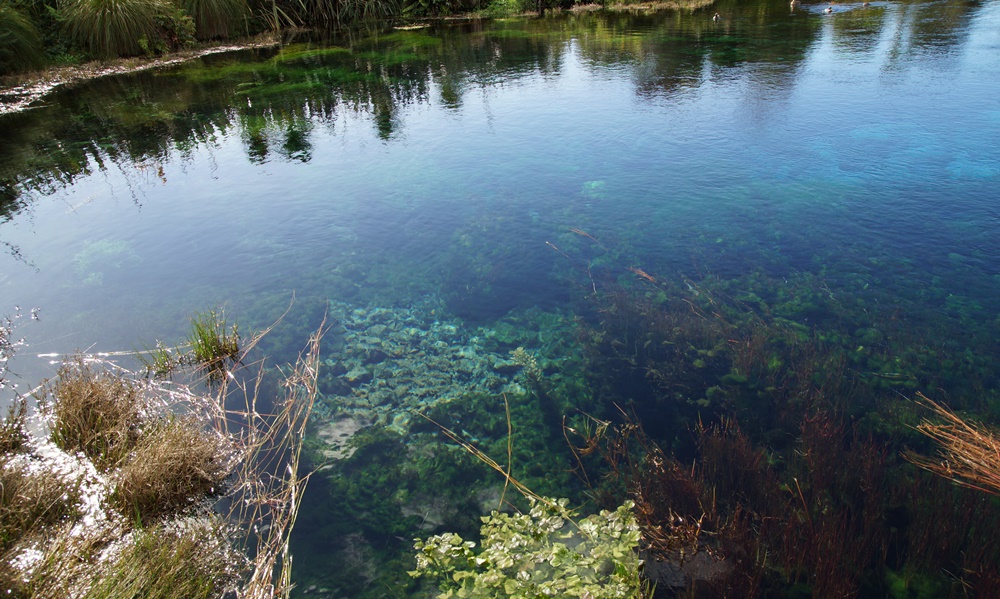 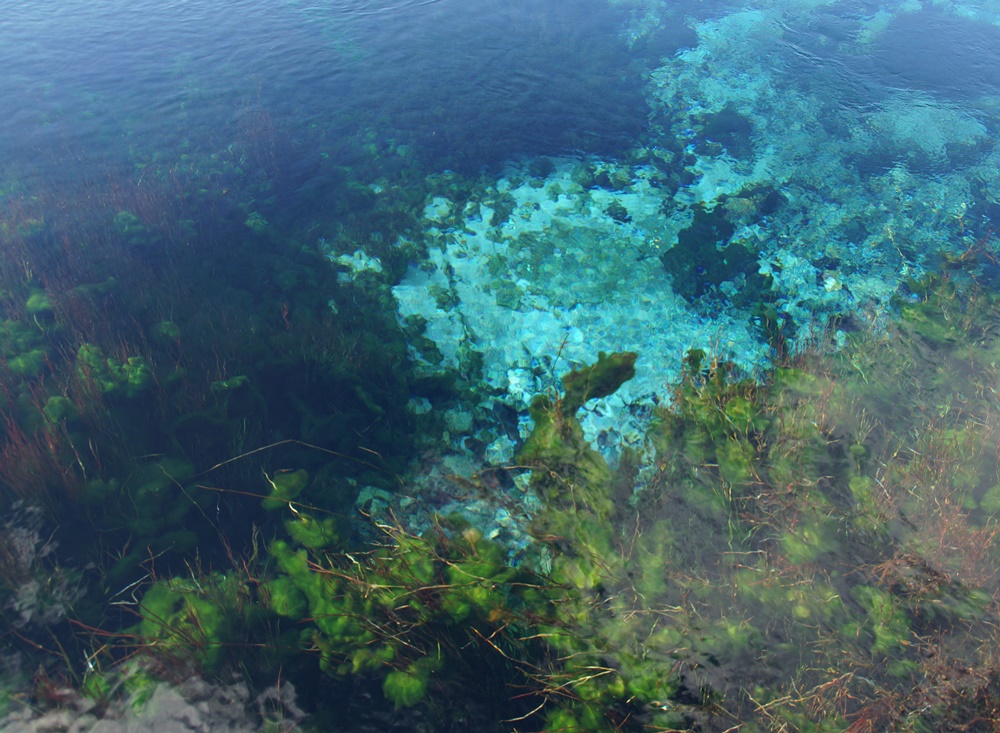 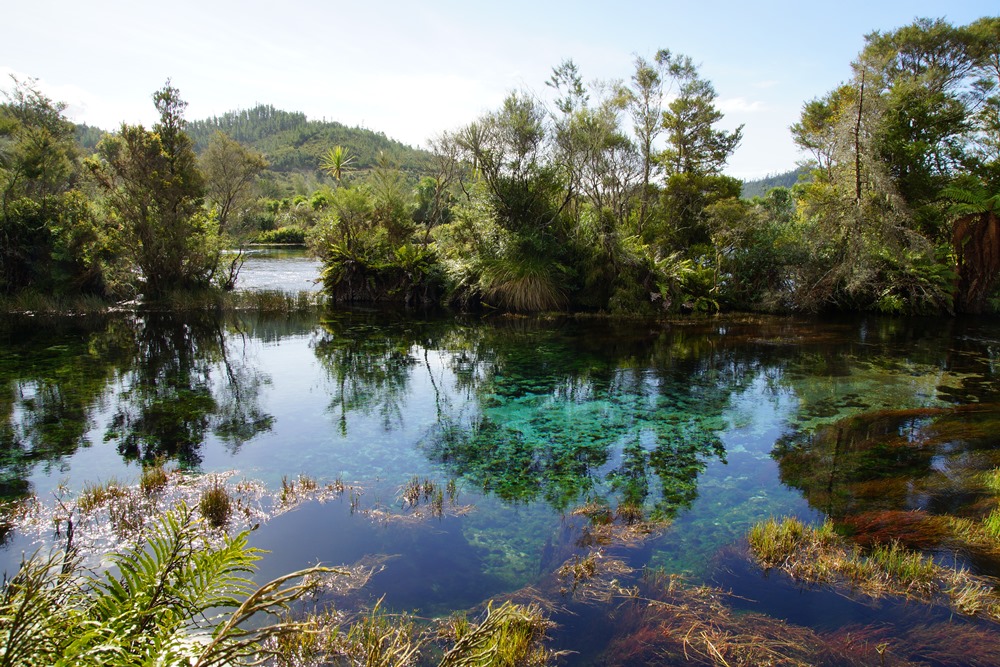 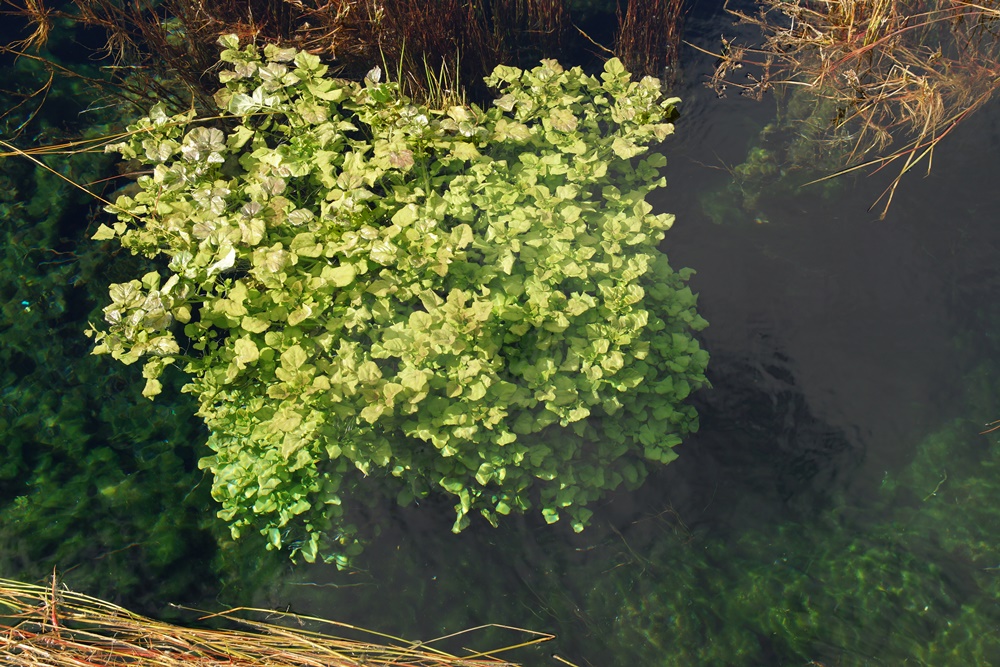 All but a few leaves of this plant are underwater, but it’s hard to tell because the water is so clear. 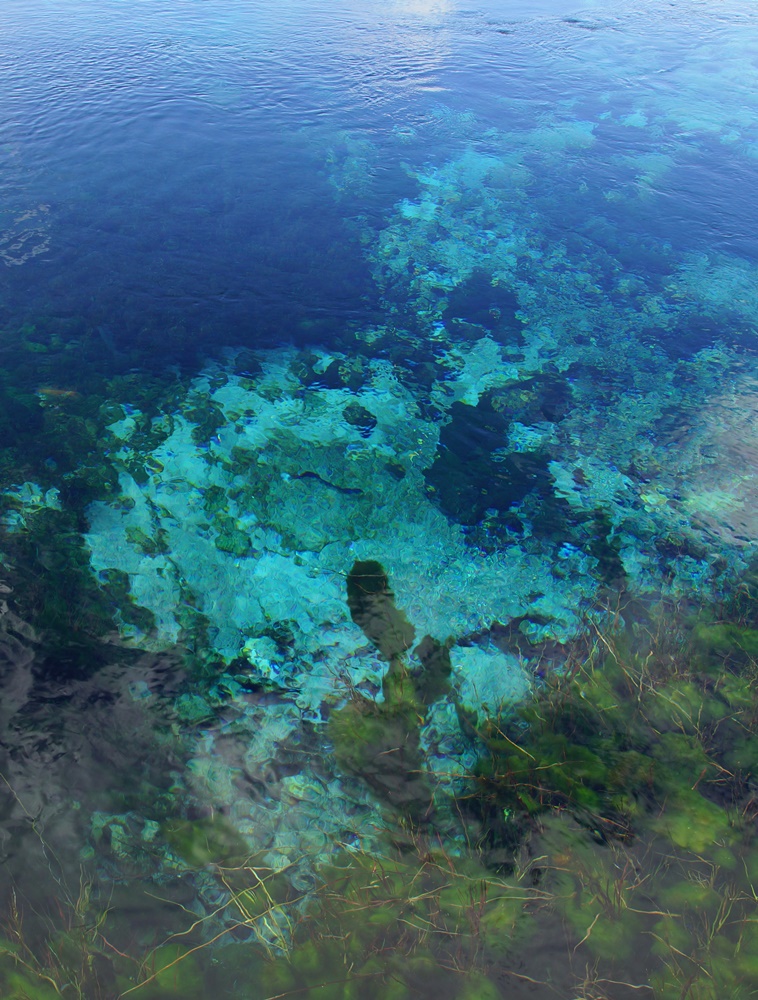 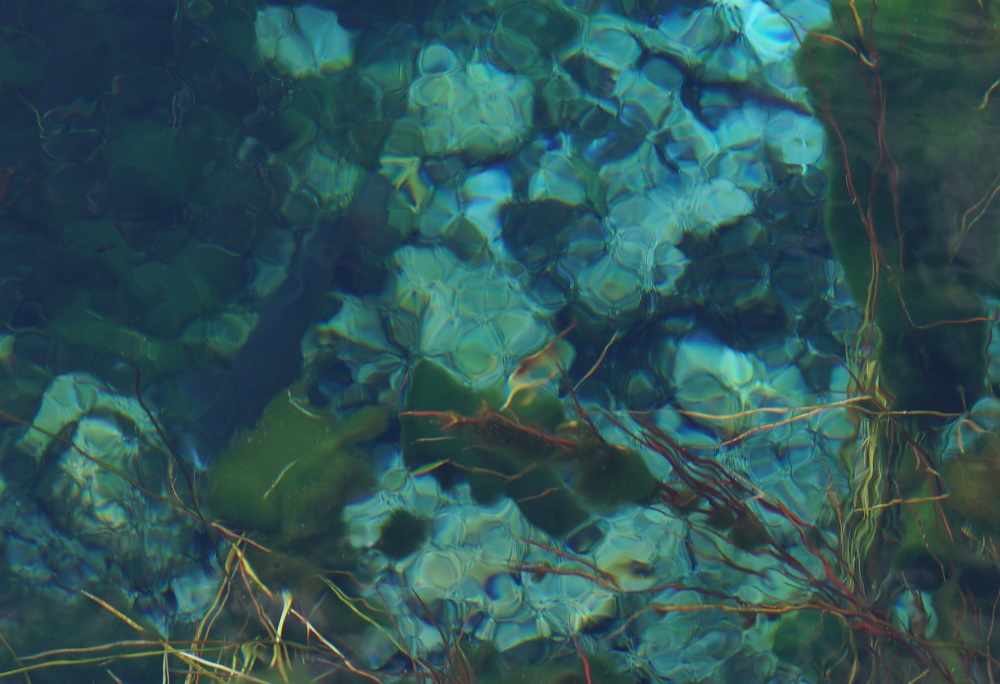 Giant kokopu
After we left the springs we headed to Onekaka to visit Fuzzle’s housebus, surrounded by the ruins of the old ironworks. She’s got big plans for the ruins, envisioning walled gardens within the concrete walls of the old sheds, and cutting paths through the bush to even more interesting structures.
Later we walked down to the Mussel Inn, and sat in their garden to eat dinner.  That turned out to be a mistake, because the sandflies were out in force under the trees, and I ended up with my ankles covered in bites (which of course are all right on the sock line, so incredibly itchy every time I put socks on).  Apart from the bites though, it was a lovely place to sit, and again we stayed talking long into the night, and then walked back (in the pitch black – Onekaka has a single street light, and we were nowhere near it!) via a hidden path that Fuzzle knew which had glow-worms living along its banks (no photos, sorry – I didn’t think to take my tripod with me, and although glow-worms look pretty bright when you see them with dark-adjusted eyes, they’re actually so faint my camera would never have picked them up without a very long exposure).

We had a slower start the next morning, hanging around the hostel until about 8 am (which felt much later, as the clocks had gone back on Saturday night) and registering a few books for the hostel book exchange shelf.  Then we headed back to the Labyrinth for Lytteltonwitch to find a geocache she’d missed on Saturday, before grabbing a quick breakfast and heading back towards Christchurch.
The reason we’d left our start so late (when logic would say getting on the road early would be more sensible to beat the holiday traffic) was that we wanted to stop off at the Ngarua Caves on the top of Takaka Hill, which didn’t open until 10 am.  We just missed the 10 am tour, but we had books with us (of course) so we settled down in their cafe to read while we waited for the next one, at 11.  The caves were pretty cool, with lots of interesting features, but of course a guided tour through well-lit caves with safe pathways is never as interesting as proper caving – it made me miss my days living on the Coast when I used to go out caving with friends who were serious cavers.  I didn’t bother to take my camera into the cave – it’s always too awkward when you’re with a crowd, and using the flash just spoils it for everyone else.  Plus sometimes it’s nice to just experience something rather than try and capture it for posterity.
It was nearly noon by the time we left the caves, very late to be getting on the road, so we encountered pretty heavy traffic all the way back to Christchurch.  We picked up another hitch-hiker, a German woman, also on a working holiday visa, who’d spent most of her time in NZ so far in Ranfurly, of all places.  She was trying to get to Westport, so we took her as far as Murchison, where hopefully she’d be able to find someone heading west.
Leaving Murchison we got stuck behind a very irritating driver who spent most of the time driving at 80 km/h, except when he got to somewhere with a passing lane, when he’d speed up to 100.  He quickly developed a long line of traffic behind him, and every so often someone would get frustrated enough to pass him in a less-than-ideal place.  It was all feeling a bit too dangerous, so we hung back a fair distance from him, which of course meant that the cars behind us thought that it was Lytteltonwitch who was being annoyingly slow, so she was getting a bit of abuse from drivers passing her (who then immediately got stuck behind the driver who was the actual problem).  He was going so slow that it wasn’t even worth pulling over for a bit to give him a head start, because we caught up to him again so quickly.
Once we did finally get a chance to pass him, somewhere around Springs Junction, we didn’t dare stop again in case we got behind him again, so we ended up skipping lunch and carrying on across the Lewis.  Our plan was to stop for a late lunch/early dinner in Amberley, but when we turned off onto State Highway 1 we hit even worse traffic – a huge line of cars barely moving at all.  We were moving so slowly that at first we thought there must have been an accident up ahead, but it was just everyone trying to get home to Christchurch at once.  So by the time we reached Amberley our early dinner turned out to not be early at all.  But at least by the time we’d eaten it was late enough that the traffic had eased off a bit, so the last 50 km or so into Christchurch was pretty smooth.  But overall a slow, frustrating and tiring trip back (and I was just a passenger – poor Lytteltonwitch must have been exhausted!) which almost destroyed all the good work of the relaxing holiday.
Still, it was a fantastic trip, with lots of adventures, and it was great to get back to a part of NZ I haven’t been to for a very long time.  I’m just glad I’ve got the rest of the week off to recover from my holiday!

Books released (all at the YHA):

At Toastmasters last night, the Table Topics (impromptu speaking segment) were themed around awful and awkward Christmas gifts, and the difficulty of pretending to be grateful for them.  Much hilarity ensued, with the result that it was decided that at our end of year Christmas party next week, our Secret Santa game (where everyone brings…

The witch and I are in Golden Bay for the weekend,  having very many adventures and with limited wifi,  so you’ll have to wait until I get home to hear them, and to see all the photos.

Thursday 21 April 2016, 3 pm, Athens In a seafood restaurant, having just gorged on greek salad, boiled wild greens, eggplant dip, fried zucchini, squid, sardines, mussels… just a light lunch 🙂  We’ve been on the go all day, so I still haven’t managed to sit down and write.  But, briefly back to the story…

So my sudden burst of trying to catch up didn’t last long. December got busy, not only with the usual round of Christmas and end-of-year social stuff, and a big project at work, but I also bought an extension to my season ticket at Little Andromeda (a really cool “pop-up” alternative theatre that opened in…

etzirah said, in response to my anxieties about the community archiving course, “All you have to do is ask a few questions and let people talk. They will. You learn. Win win!”  And she was absolutely right.  I spent the first couple of hours just listening, then I started asking questions, and was rewarded with…