As promised, a totally selling-out post on the Food Show, which I attended today (with Lytteltonwitch as my trusty assistant) thanks to free passes from a friendly PR person. 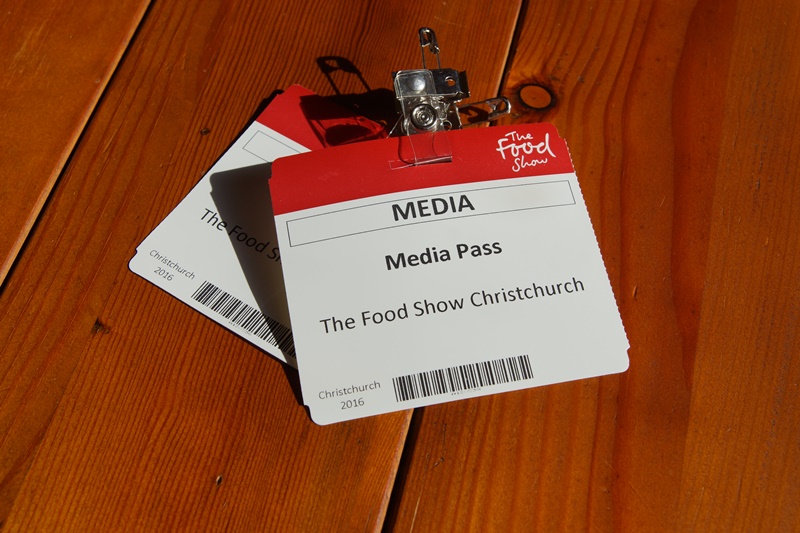 I was greatly amused when the free passes turned out to be media passes!  Yes, I know blogging is social media and all that, but it’s still funny to think of my little blog being considered media.  A few stallholders noticed my badge and asked who I was affiliated with – I think they were probably hoping for The Press or one of the big magazines, but they all hid their disappointment well when I admitted I was just a blogger 🙂
Anyway, here’s all the pretty pictures.  Proof I’m not a journalist: I was more concerned about getting good photos than including the companies’ branding in the pictures, but I did make a note of the names of the ones whose free samples I particularly enjoyed (So many free samples!  There was an area where you could buy lunch, but by the time we’d done the rounds and sampled everything on offer, neither of us felt in need of an actual meal).  Mostly though I just took pictures of attractively laid-out displays, or particularly enthusiastic demonstrators – just stuff that caught my eye, in other words. 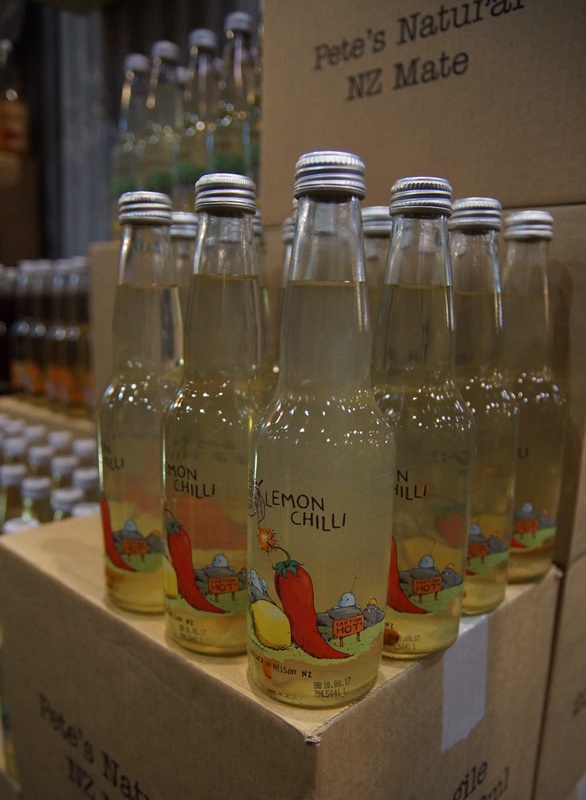 Chilli-infused lemonade, from Pete’s Natural. Interesting, but seriously intense (yes, that is an actual chilli pepper you can see inside the bottle, and it tasted like it too!) – I can’t imagine drinking a whole bottle of it! Their Lime-o-nade flavour was really good though – it had mint in it, which was so nice. If I wasn’t going away so soon I probably would have bought a few bottles to take home. 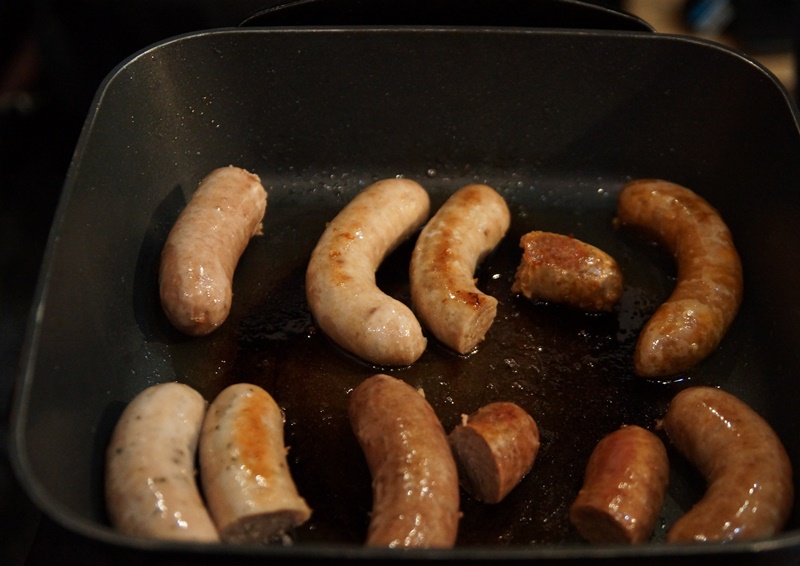 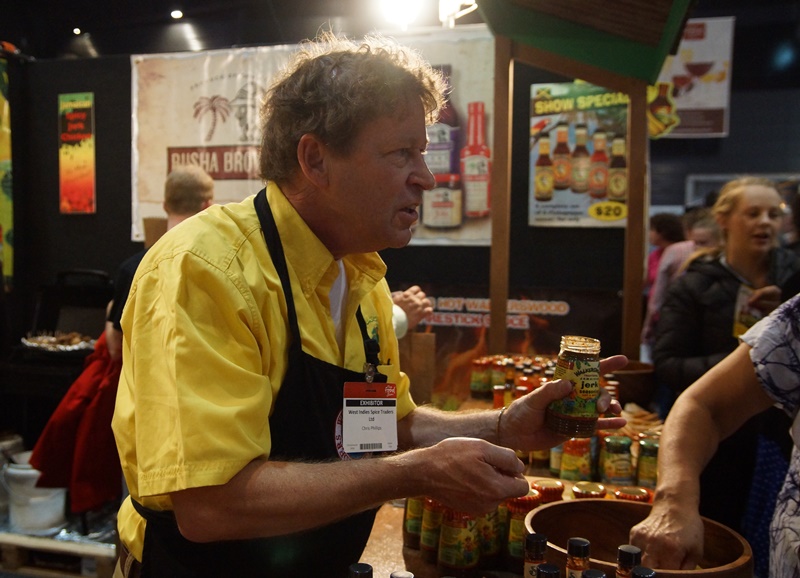 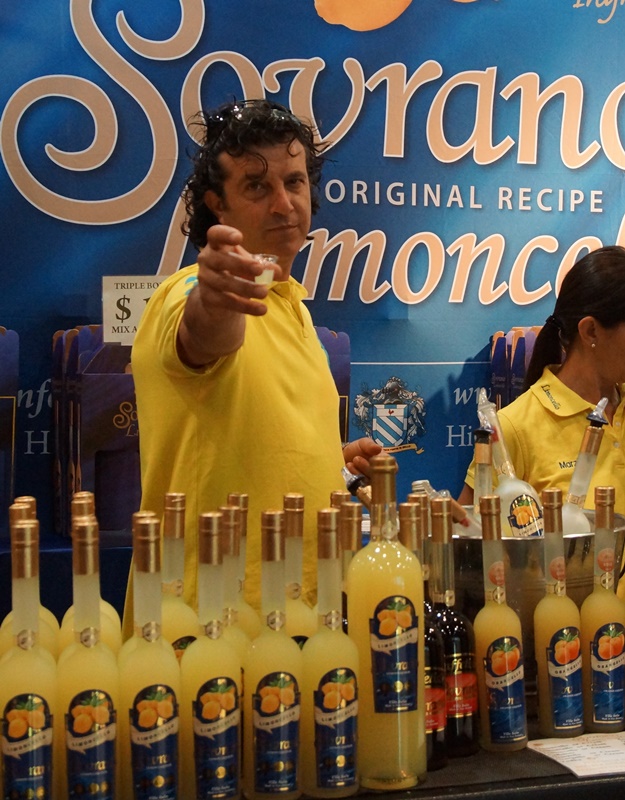 This guy was wonderful. Very strong Italian accent, calling out compliments to everyone who passed and encouraging them to come and try some limoncello (which was very nice, especially the cream variety, but with a serious kick – I reckon it would be very easy to get very drunk on it very quickly!) 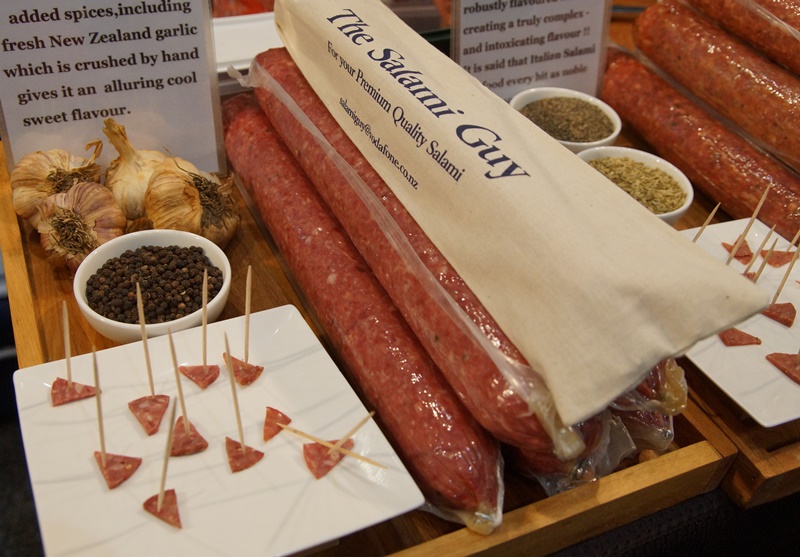 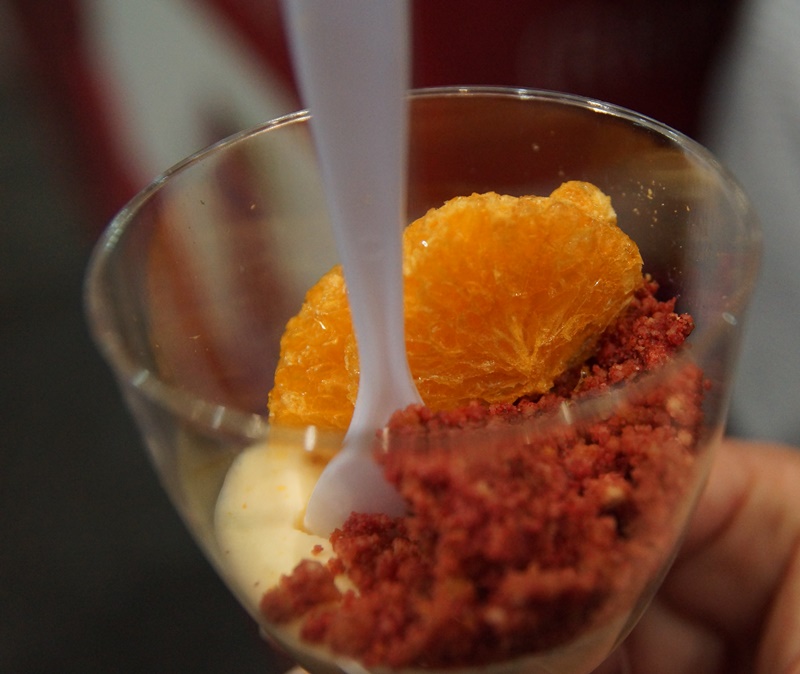 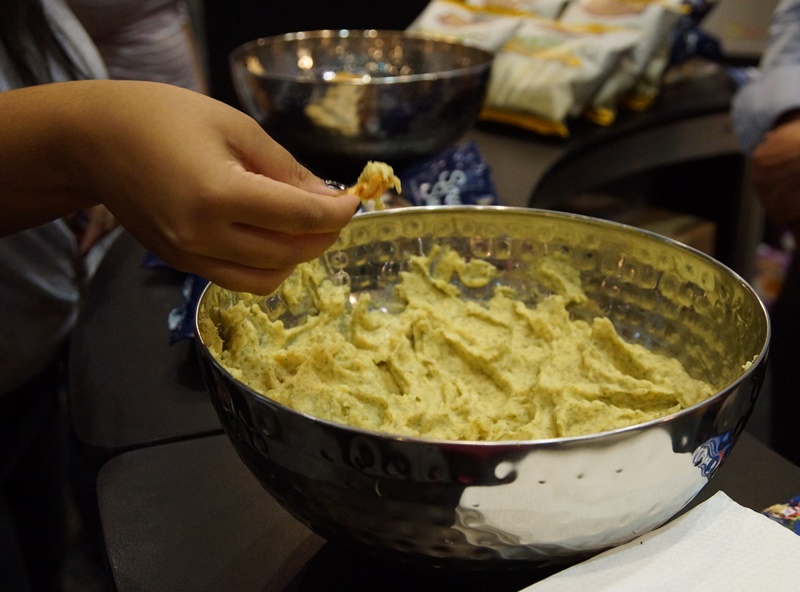 Parsnip dip (no, not the cat, the vegetable 🙂 ). The stall wasn’t actually selling dips though – it was actually promoting vegetables grown in Southland. They had boxes of really nice-looking winter vegetables for sale that again I probably would have bought if I wasn’t heading away so soon. 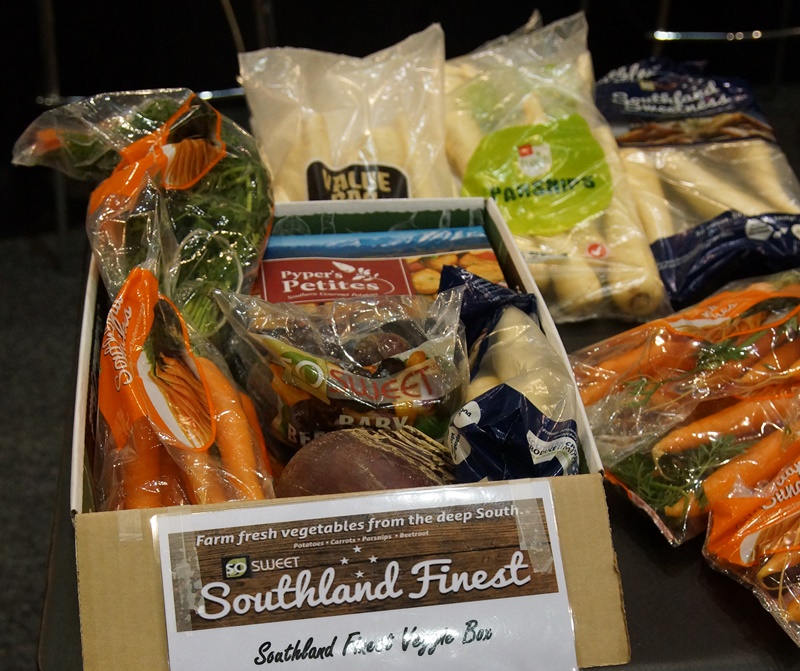 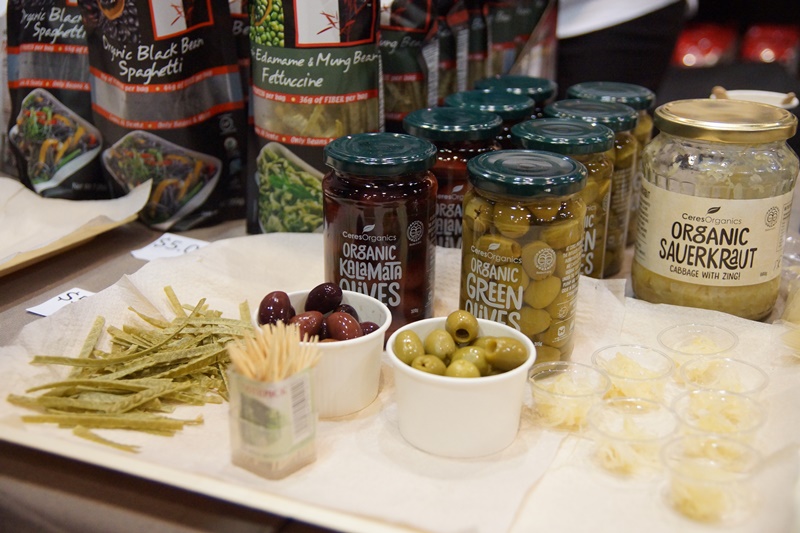 When the woman at this stall saw I was taking a picture, she quickly rushed to re-fill the dishes of olives so they’d look better for me. So even though I wasn’t particularly excited by the food (I’ve never been a big fan of olives), I’ll give them a plug just for being nice 🙂 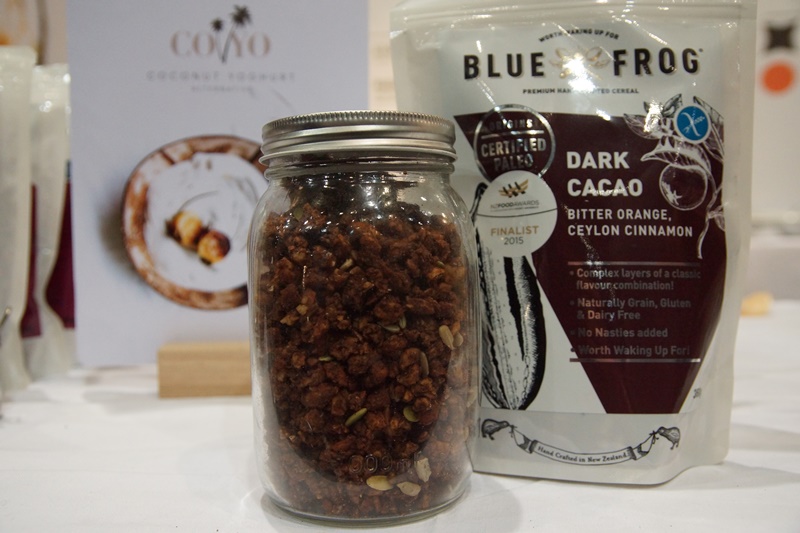 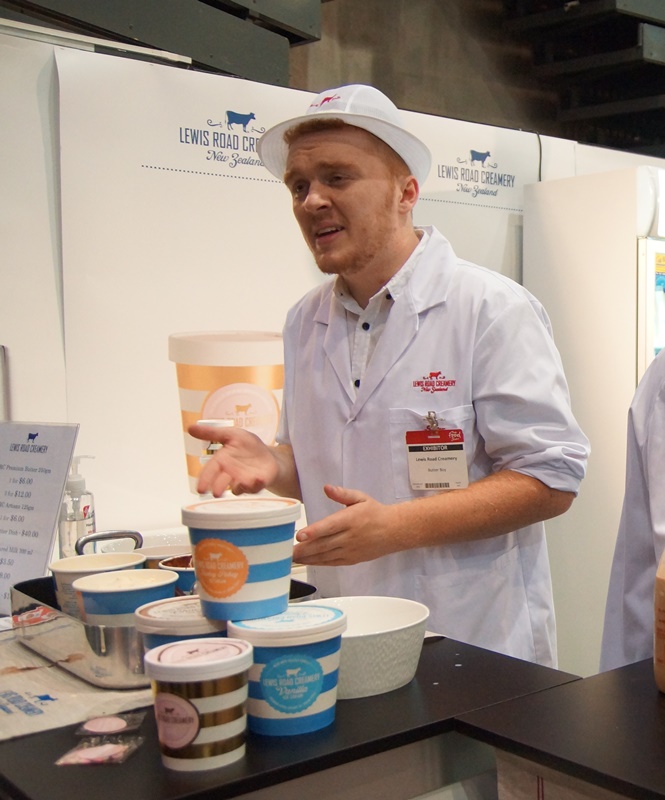 Rosewater-flavoured icecream. An interesting idea, but a bit sickly for my taste. 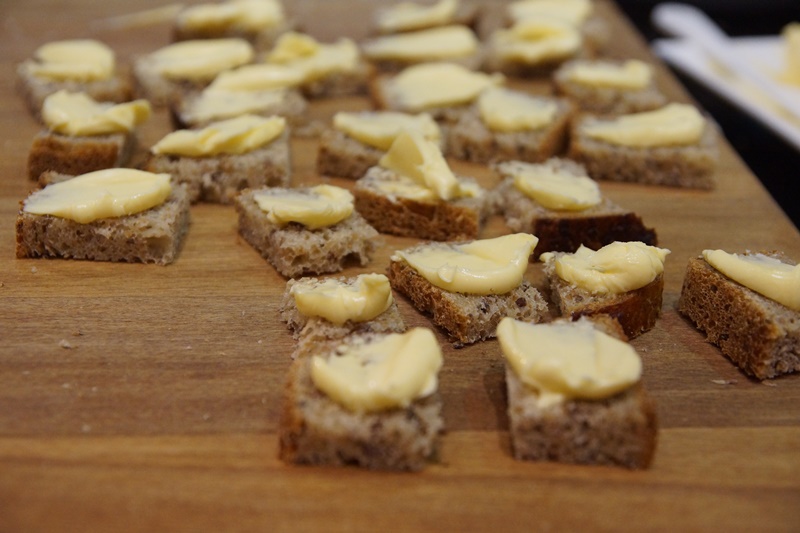 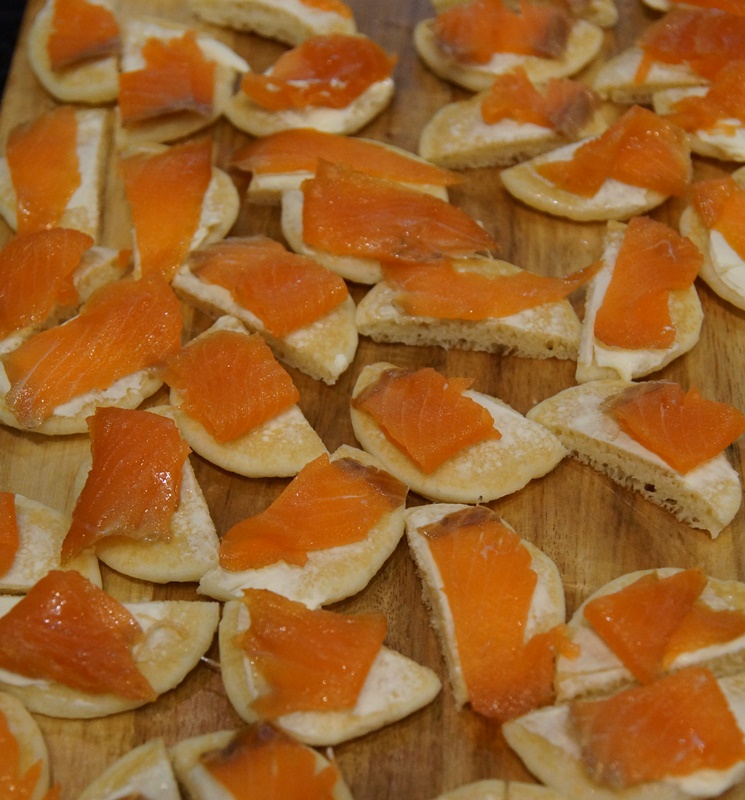 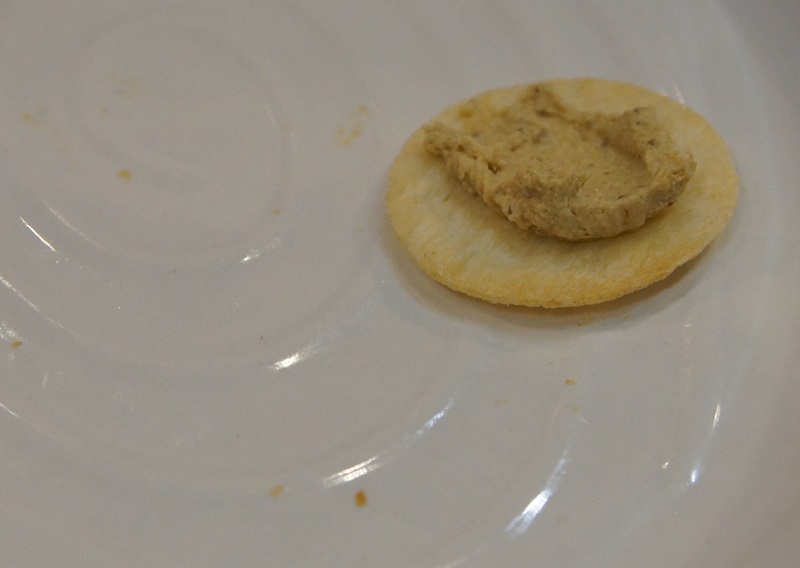 The samples of mussel paté at this stall were being grabbed up faster than the staff could replace them! 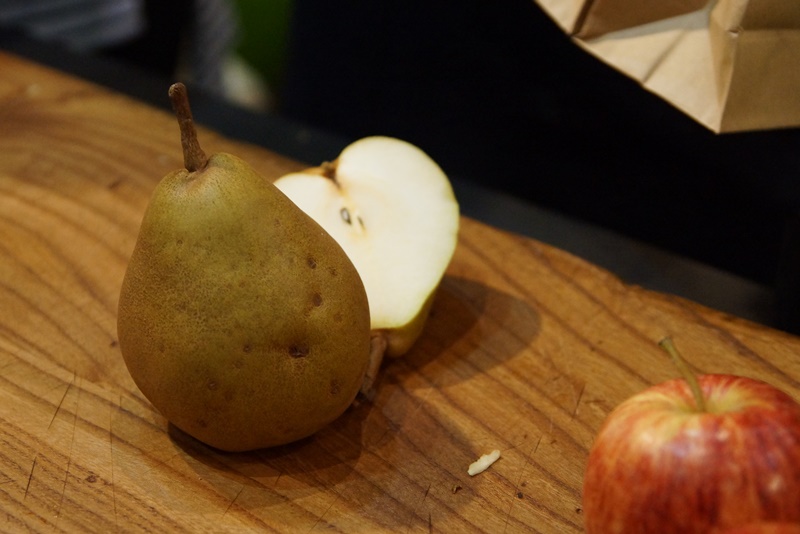 A refreshing break after all that spicy food (and especially salami – it seemed like every second stall was offering salami. So many so that they all began to blur into each other, and I can’t remember now which ones I liked). Fruit and juices from Nelson. They gave me a notebook and pen too – swag! 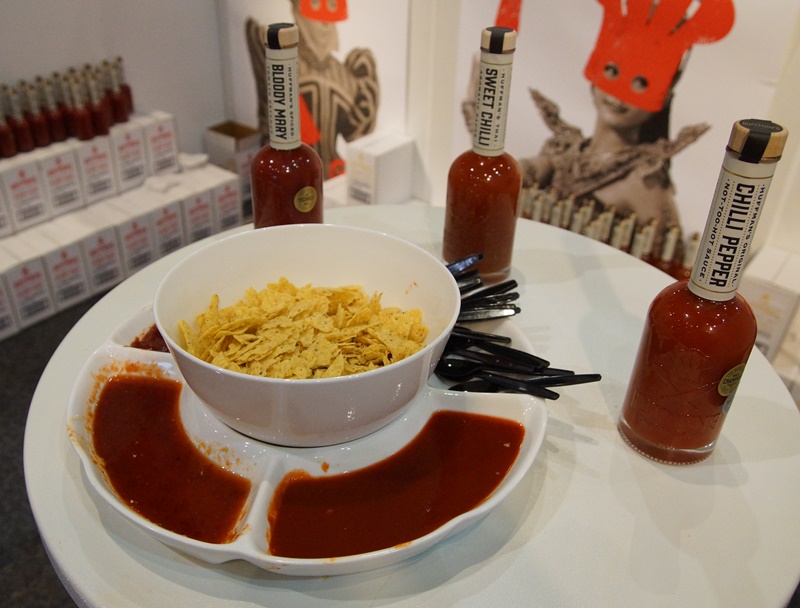 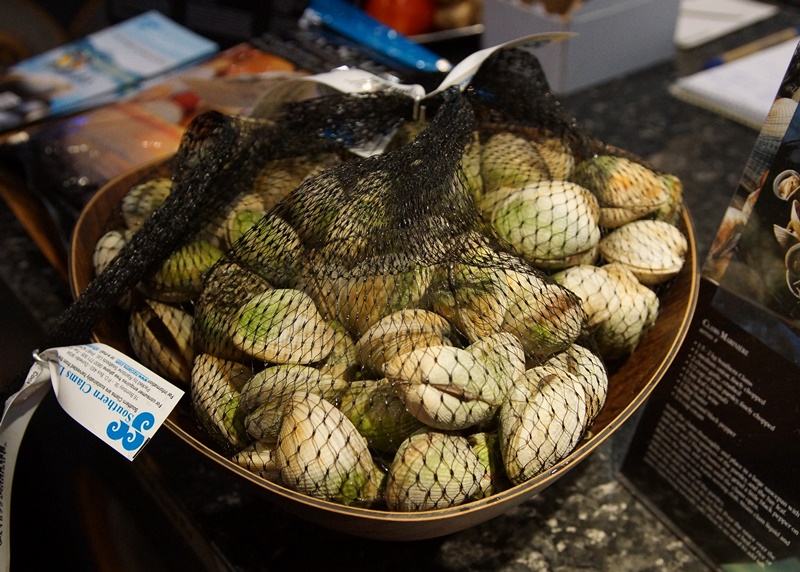 Apparently pipi have been rebranded as “Southern Clams” now. You can’t fool me, they’re still pipi, and you can pick them up off the beach for free :-p 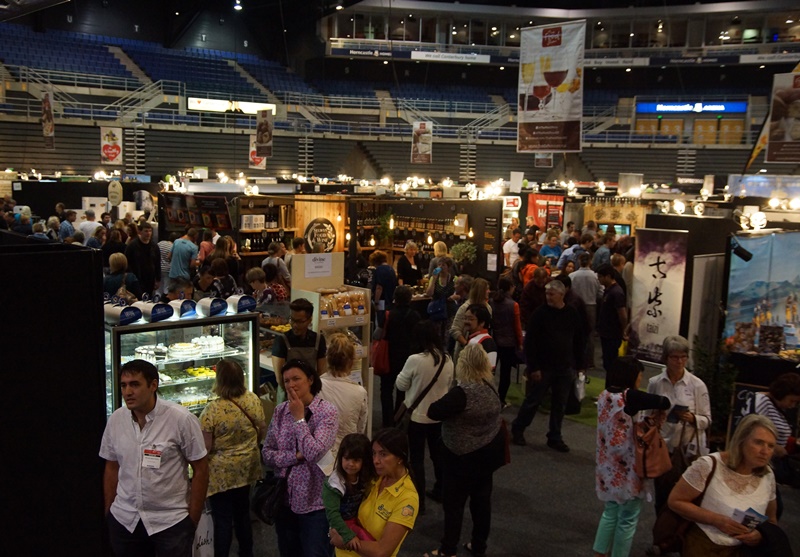 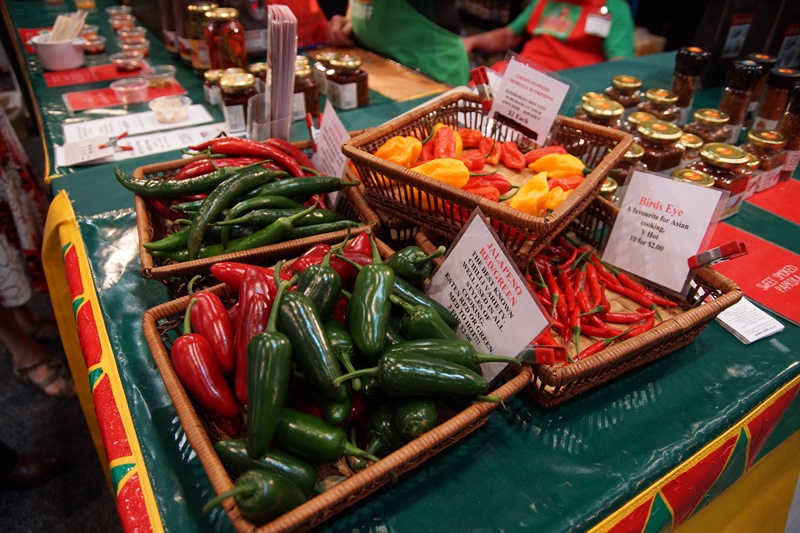 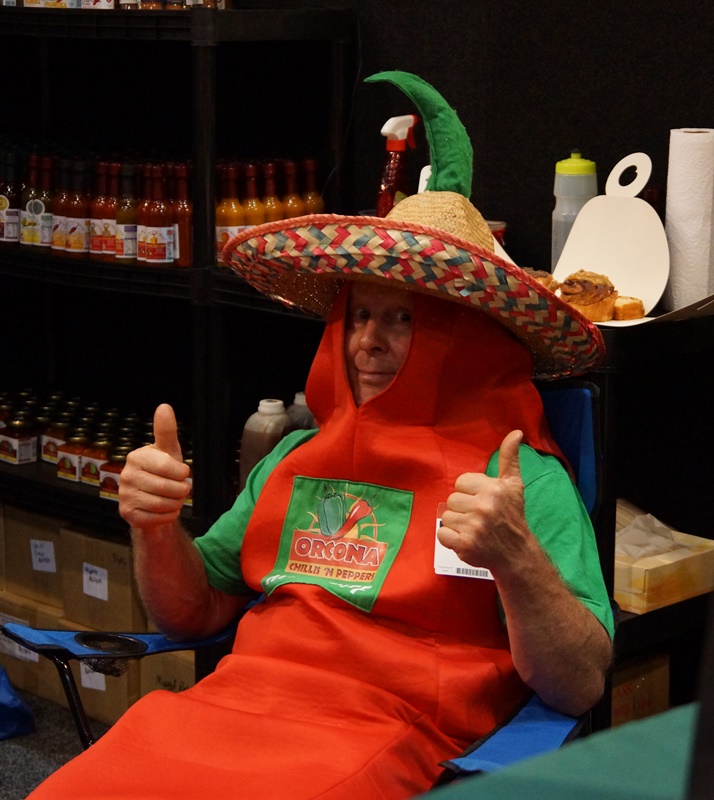 I almost didn’t notice this guy until Lytteltonwitch pointed him out. He looked very tired (though he perked up a bit for the photo) – I suspect he’d been on his feet all day. 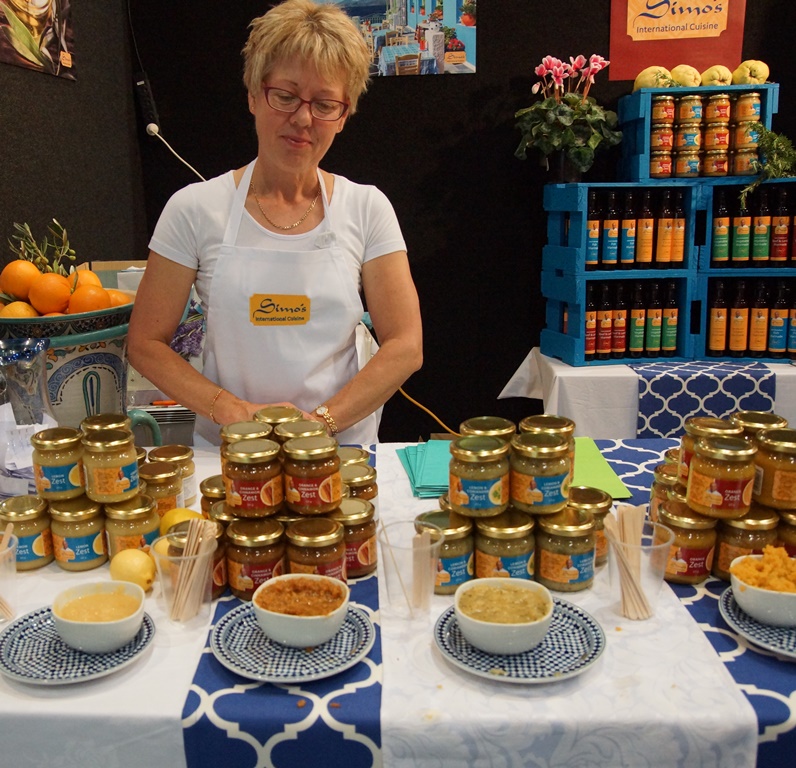 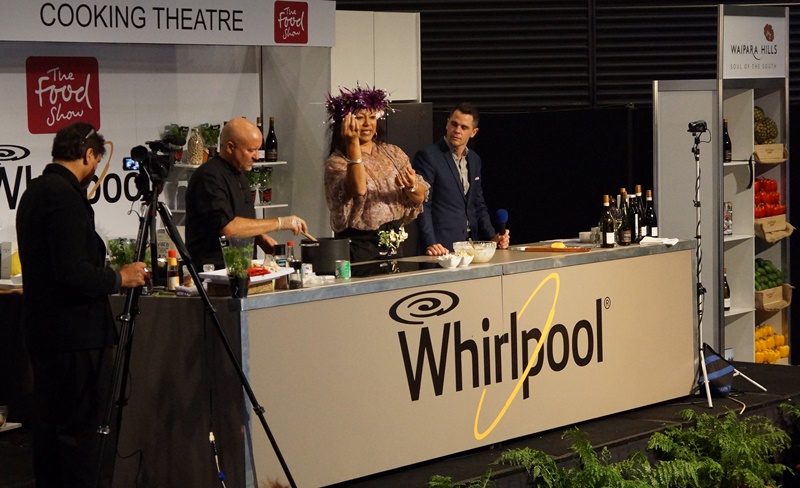 There were cooking demonstrations from various celebrity chefs over the course of the day. We only watched one, but it was very entertaining. Robert Oliver was demonstrating some Samoan recipes, but what made it really fun was he was “assisted” by Cindy of Samoa, a fa’afafine entertainer whose commentary had the audience in hysterics – she was turning everything Oliver and the MC said, no matter how innocent, into a double entendre, and had a poor young man from the audience blushing intensely as she taught him the traditional way to scrape a coconut (which involves sitting on the scraper and rubbing the coconut on it between your legs… yeah, you get the idea). 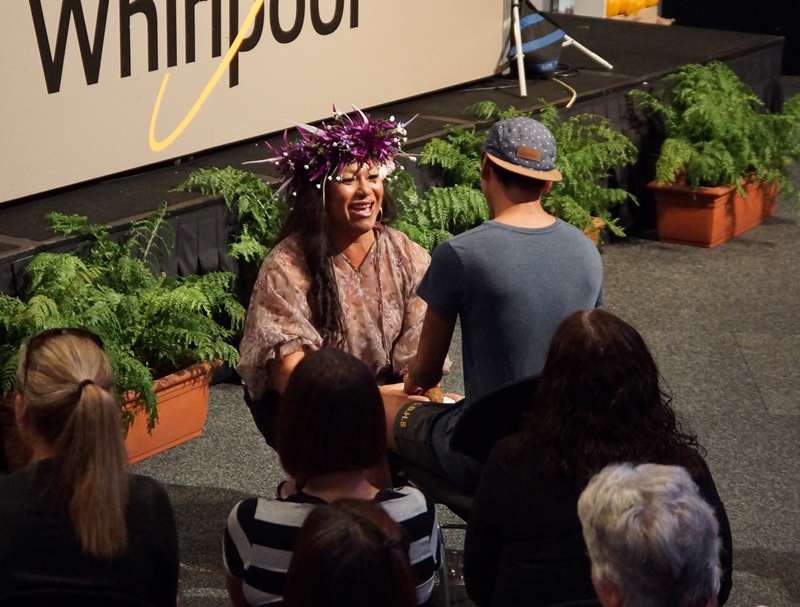 So, general impression of the day: fun, lots of interesting foods to sample, and I reckon if you’re a foodie probably worth the entry price.  And definitely worth it if you can score a free entry! 😉

Still no news on the work front, other than that the VC is currently considering our business case, and hopefully should make a decision before our contracts run out (again…).  I’m not sure if I want him to make a decision quickly just to remove the agony of waiting, or if him taking his time…

umber one thing: I want to know whose decision it was to schedule the election for the same weekend that daylight savings starts?  Have they no sympathy for those of us who stay up half the night to watch the results, and then get an hour less to sleep in the morning?  This is nothing…

emember ages ago Lytteltonwitch and I were down in Alexandra, and I said we’d greatly amused ourselves by walking backwards out of a maze, and I promised to show you a video?  And then I didn’t?  Well, finally I managed to get the video edited (mainly just removing the “um, I think I’m recording, I’m…

‘ve been getting into a bad habit of eating lunch at my desk lately, so I decided today to escape campus and go out for lunch.  Well, technically escape campus – I actually just went to the new cafe that’s opened on Ilam Road, right on the edge of campus.  But that’s not actually *on*…

What’s making me smile right now: A brisk walk home under a dark and threatening sky – I made it home without getting rained on, plus I’m feeling energised from the exercise.  And now the fire is roaring away and soon the house will be nice and warm. I made a start on a big…