arvestbird’s writing talent has been recognised with the inclusion of one of her essays in Tell You What: Great New Zealand Nonfiction 2015, which had its Christchurch launch last night.  She invited me along to the launch, where she and a few of the other included writers read teasingly short excerpts from their essays.  It wasn’t a huge event, just a couple of dozen people, but I still managed to feel completely overwhelmed being surrounded by all those super-clever literary types (you’d think having worked in the English department for so many years I’d be used to it by now, but I still sometimes get intimidated – at heart I feel much more like I belong on the sciencey side of the campus).  Probably didn’t help too that I was feeling tired after not having slept well the night before, so the whole “make vaguely intelligent small-talk with people I only vaguely know” thing was feeling a lot more challenging than usual.  Still, despite not being a glittering success socially, I did enjoy the readings, and of course bought myself a copy of the book.
Oh, and I discovered that I know the editor! I thought she looked vaguely familiar when she was introducing the writers, and later she came over and asked me if we’d met. It turned out she and her partner had flatted with Ornot, and I recognised her the minute she’d said it – I spent so much time hanging around that flat that year (it was the year I was at Teacher’s College, and I was terribly bored) that they might as well have put me on the lease. Her partner was at the launch too – so strange to see them again after so many years.

I’ve been playing round with Javascript some more, and I’m feeling quite proud of my latest achievement.  It was inspired by stumbling across a mention of the Mandelbrot Set, a famous fractal that I had a passing fascination with back when I was studying maths.  I was reminded of one of my teaching colleagues in the early 90s having managed to programme a computer to generate the graph, a programme which took about 12 hours to run.  I wondered how much faster a similar programme would run on today’s computers, so I decided to see if I could write something in Javascript to generate the graph.  And the answer was, yes I could (I cheated a bit on the maths bit and looked up the algorithm – it’s a long time since I played with serious maths!), and it runs much much faster – less than a second to test the first 20 iterations of the points in a 500×500 graph.
I still want to play round with the programme a bit to add a function to zoom in on an area (which is part of the fascination of fractals, that being able to zoom in infinitely closely and see the new patterns that emerge), but in the meantime here’s a pretty screenshot: 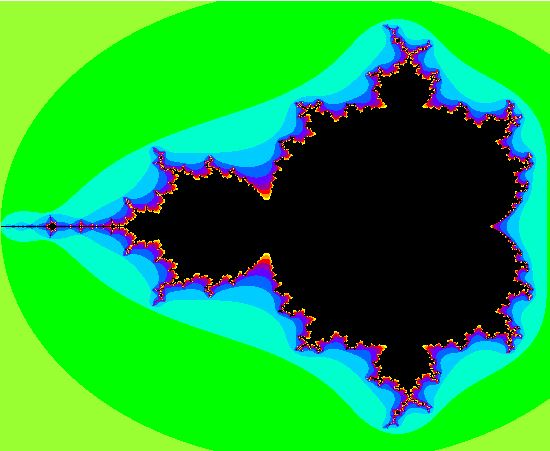 Of course, it’s a completely pointless exercise, but it’s a fun way of stretching my Javascript skills and learning things that I might be able to actually apply to my real work.

At Toastmasters last night, the Table Topics (impromptu speaking segment) were themed around awful and awkward Christmas gifts, and the difficulty of pretending to be grateful for them.  Much hilarity ensued, with the result that it was decided that at our end of year Christmas party next week, our Secret Santa game (where everyone brings…

Lytteltonwitch and I spent the weekend in Oamaru, where they were holding their annual Steampunk Festival.  We didn’t dress up ourselves, but we did go to a few of the events. I think what was most fun though was just seeing all the costumed people wandering around the streets. I wasn’t brave enough to actually…

So much for autumn, we seem to have skipped straight to winter.  We’ve had three days now of gales, heavy rain, and the occasional flurry of sleet and hail.  Half the city is flooded, there’s trees down all over the place, and it’s generally cold and wet and miserable.  My garden is like a lake,…

Major thesis milestone passed: I finished writing my research proposal this afternoon!  A week late, though considering the interruptions of earthquakes (and earthquake anniversaries, which is a busy time for us at work), I think I’m doing pretty well to only be a week behind. For those of you sensible enough to not attempt a…