ne of my colleagues is part of Generation Zero, an organisation that’s putting the lie to the idea that young people aren’t interested in politics any more.  With the elections coming up she’s been getting involved in a lot of the local campaigning, and she mentioned the other day that the Greens were looking for people willing to host election billboards on their properties.  So I told her she could give them my name, and my front garden now loudly proclaims my political leanings. 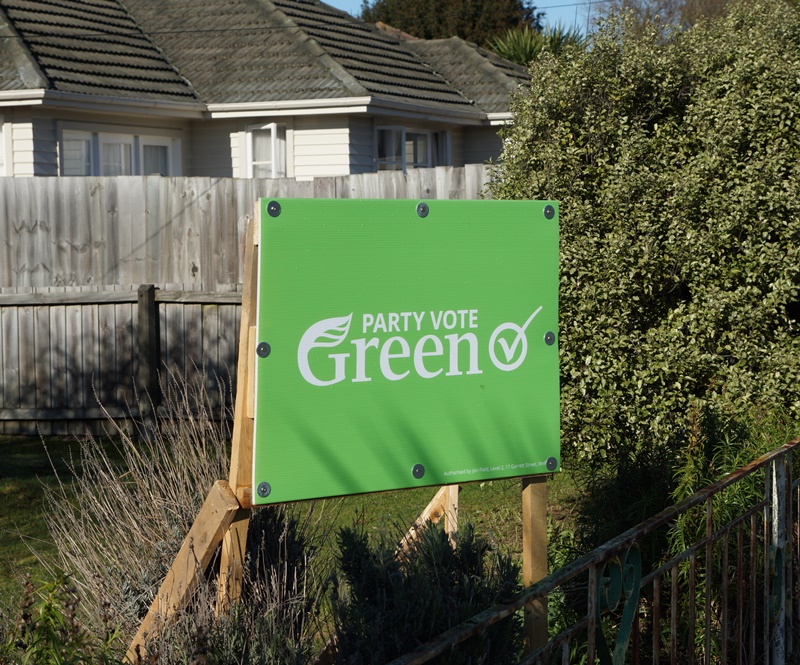 Actually, I don’t even know if I’m going to vote Green yet – I’m still deciding (and in fact I’ll probably end up splitting my vote, often a useful strategy in MMP).  But they’re definitely strongly in the running.  And, more importantly, I live in the heart of what has always been a very safe National seat.  National is about as far from my own political beliefs as it’s possible to get (well, almost – there’s a couple of minor parties even further to the right), and our local MP is very high up in their list, so it can a bit disheartening at election time to know that no matter who you vote for, he’s going to get back in – I can understand why some people don’t even bother to vote.  So it seems important to show that this electorate isn’t actually only made up of National supporters – maybe it will encourage someone who wasn’t planning on voting to think that their vote will actually have a chance of making a difference (and who knows, maybe it will – I’ve actually seen quite a few left-leaning billboards springing up around the area over the last few days – maybe there’s a shift happening?)
And if nothing else, hopefully it will be a small irritant to Gerry Brownlee next time he drives past (which he does do occasionally – his electorate office is just up the road) 😉

y holiday is almost over, and as usual I didn’t achieve half the things I’d planned to do, but on the other hand, I did achieve a lot of things I didn’t plan to do (like an impromptu trip down to Alexandra) so it all evens out in the end.  And after a big burst…

fter a week of lovely spring weather, even managing to reach the low 20s for a couple of days, it’s back to being cold and wet and miserable again.  I’d planned on going out to deliver those flyers today, but it was just too wet, so I’ll have to do them tomorrow – the forecast…

I decided it was about time I got round to finishing off the Birds in Flight quilt (which I feel like I started about a million years ago), so I spent the weekend working on the connecting bits for the strip of birds to go on the back. I didn’t get it finished, but I…

erm started this week, and I’m already swamped with work (it’s worrying when the lecturer says she’s going to give you a nice easy reading for the first week, and it’s 40 pages long (and that’s not counting the two “optional” readings that go with it…).  Yeah, I kind of forgot just how hard Honours…

DD was down most of yesterday, so I had to post yesterday’s entry on Livejournal instead.  But look, proof I really didn’t break my daily posting streak: Anyway, here’s a copy and paste of what I would have written yesterday if the site had let me in: A few interesting recent catches: My Favourite Wife…

It’s been miserable weather here (across the whole country actually – there’s been floods all over the place), and I’ve got a cold, and I’m totally over winter.  But today the sun came out, and I spotted a tiny patch of violets (I think?  Are they still violets if they’re white and not actually violet?)…