I started the quilting! 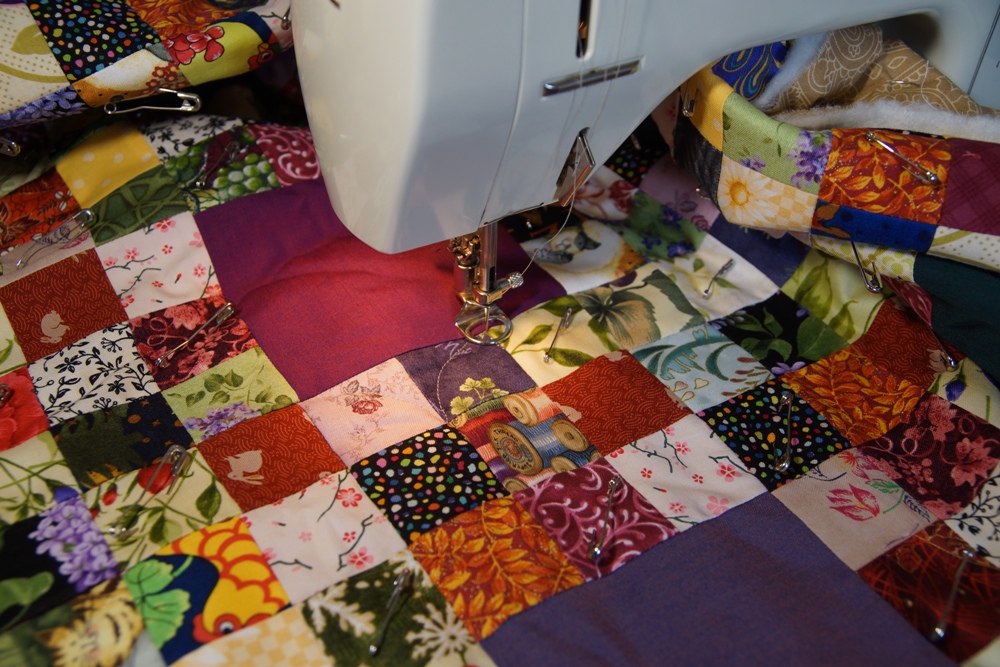 I did get quite a bit further than that today, but by the time I thought to take another photo the light was no good.  So you’ll just have to wait 🙂  I managed to get just over a quarter of it done, though, so I’m making good progress.  And the quilting is working out exactly as I envisioned it, so it should look pretty good when it’s finished.

I went to see the NZ Opera production of Carmen last night with Lytteltonwitch.  It’s actually the first “proper” opera I’ve ever seen, and it was really good.  I was very glad of the surtitles though, as otherwise I’d have had no idea what was going on (Lytteltonwitch summed up the plot for me as roughly “Boy meets girl, someone dies at the end, and in between there’s a lot of singing”).  It took me about half an hour to figure out what language they were singing in, let alone be able to make out any of the words… yeah, I probably should have bought a programme or something 🙂
Anyway, I really enjoyed it, and was surprised at how many of the tunes I recognised – a lot of them are ones that are just in the popular consciousness, without you necessarily knowing where they come from.  The staging was really good too – they did some really clever stuff with lighting, like casting shadows of the actors onto the walls during the bar scene, which gave quite a threatening feel to it.  The bar scene also cleverly put the women in a position of power, so that it switched gradually from a group of drunken men demanding that the women (not sure if they were supposed to represent prostitutes?) dance for them, to the women totally controlling the men and making them perform – the confusion at the end of the scene when the men suddenly realising the roles had been reversed was quite lovely.
And of course, as you’d expect, some really powerful singing, especially from the performer playing Carmen.

On Friday night I went round to Dana’s after work (this is becoming a regular thing).  There was quite a large group there, so rather than play video games (as is usual on Friday nights – they have a Nintendo Switch connected to a projector, so the screen is pretty much the entire wall), we played a few board games.  One was totally new to me (and I can’t remember the name of it now), but the others I’d played before with the Gwilks – Dixit and Codenames.  A lot of fun, even if I did feel a bit old at times (most of the people there were in their mid twenties).  And I was on the winning team for two of the games, which is always good 🙂

ne of the nicer side-effects of the earthquakes is that because we lost almost all of the city’s arthouse cinemas, the mainstream cinemas have started showing a broader range of films to cater to some of that market.  As a result, the local Hoyts is celebrating Diwali with a selection of Bollywood films, one of…

Actually, I’ve been home for a few days, but DD was down. I had an amazing time in France (and Spain) – had a million adventures, which I might even get round to writing up one day (yeah, I always promise that, but we know it’s never going to happen…) I did manage to film…

I had to go into town for a meeting on Thursday (it still amazes me that I have the sort of job now where I get to have meetings – and not the sort where I’m only there to take minutes!), and on the way back to work I passed a sign for Scorpios‘ newly…

inally I’ve got my new computer!  I almost had it a couple of weeks ago, but then I didn’t.  But that’s a story best told with a ridiculous number of photos (don’t say I didn’t warn you).  So, without further ado, how to build a computer: Except it wasn’t.  Because that’s where it all started…

Not to keep you in suspense any longer, I made that block again, this time being a lot more careful about my quarter inch seams.  And it worked! It’s still a tiny bit smaller than it should be (I actually think my sewing machine is slightly out of alignment, because the needle doesn’t come down…