The conference went really well – our talk seemed to be well-received (my boss was in the audience, along with at least three other people I know as experts in digital archiving, and all were nodding at the right places, so I don’t think I said anything too stupid 🙂 ), and (once the stress of having to present was over with, so I could actually just relax and enjoy the rest of the conference) I met all sorts of interesting people, and learnt all sorts of interesting things.
Here’s our presentation, if you’re interested:
[Ok, so apparently I can’t embed a YouTube video here (weird, I thought I’d done it before, but maybe not) – oh well, you’ll just have to cope with a link instead (Later: I finally figured it out, so I can actually embed the video)]

I was seriously exhausted (and totally peopled-out) by the time I got back to Christchurch though. Three days of conference is way too much pretending to be an extrovert for me!

I was also exhausted because my sore tooth, although never seriously painful, had been low-level achy for long enough that I was getting pretty run down (which is mostly why I haven’t been posting much – I haven’t had a lot of mental energy for anything for the last couple of weeks).  I’ve never been looking forward to a dentist appointment as much as I was by Wednesday!
I don’t remember much about the surgery itself, because they gave me intravenous sedation, so I spent the whole time in an only semi-awake state.  Every so often something would be particularly sore, or the noise would get particularly gruesome, and I’d half wake up, groan a bit, feel them stick some more local into my jaw, and I’d drift off again.  Having sedation definitely makes the time go faster, but on the down side, I reckon they’re not as gentle with you when you’re not fully concious, because I was feeling very bruised and battered the next day!
Harvestbird came to pick me up after the surgery was finished, and (after an entertaining walk to her car, with lots of staggering around on my part because I couldn’t walk in a straight line) took me home.  She settled me onto the couch, where (after dribbling blood all over myself when I attempted to take a sip of water with a numb mouth…) I promptly fell asleep for the rest of the afternoon.  Harvestbird told me later that she’d had a very productive afternoon getting a load of work done on her laptop while I slept, which made me feel a lot less guilty about her having to take the afternoon off to babysit me (because of the sedation, she was under instructions from the dentist not to leave me alone for at least 4 hours until the effects wore off).
Along with the usual envelope full of dressings, and prescription for antibiotics and painkillers, the dentist handed over another envelope as we left, which on later inspection turned out to contain my wisdom teeth.  I have absolutely no idea why he would give me them – I would have assumed they’d just go straight into medical waste.  I wonder if he asked me, in my drugged state, if I wanted them, to which I’m sure my inner 10 year old would have enthusiastically responded “Cool, yes please!”.
My outer not-10 year old is equal parts fascinated and repulsed by them (warning, seriously gross picture ahead (although, by the time you’ve scrolled down to read this bit, you’ve probably already seen what’s coming… sorry!)) 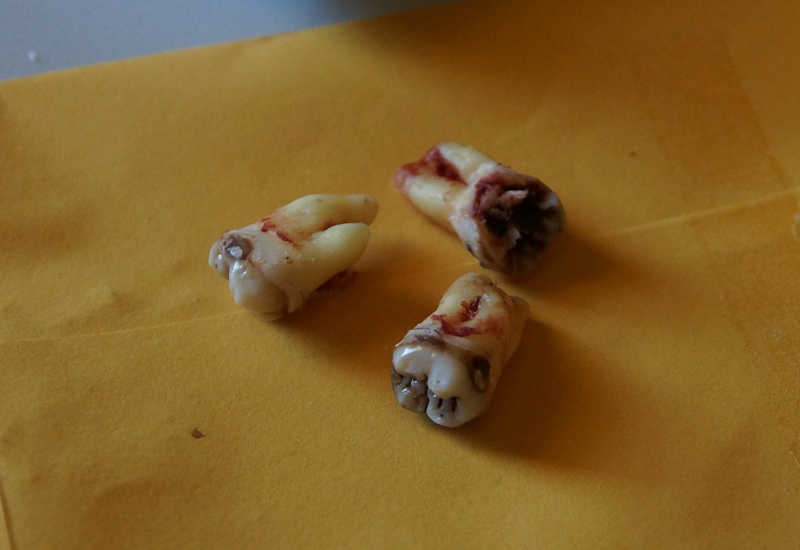 To refresh your mental palates after that, here’s a pretty picture of the flowers Harvestbird bought me to cheer me in my recovery: 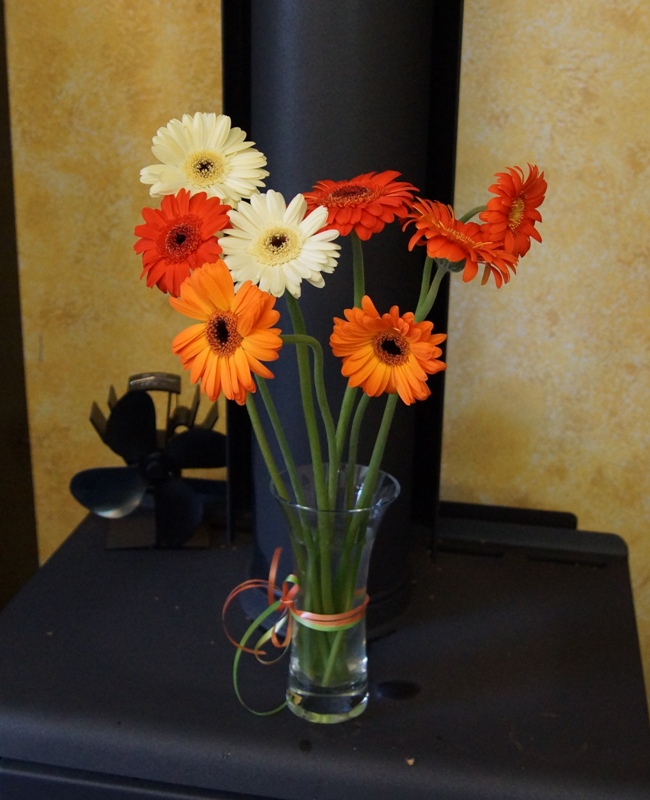 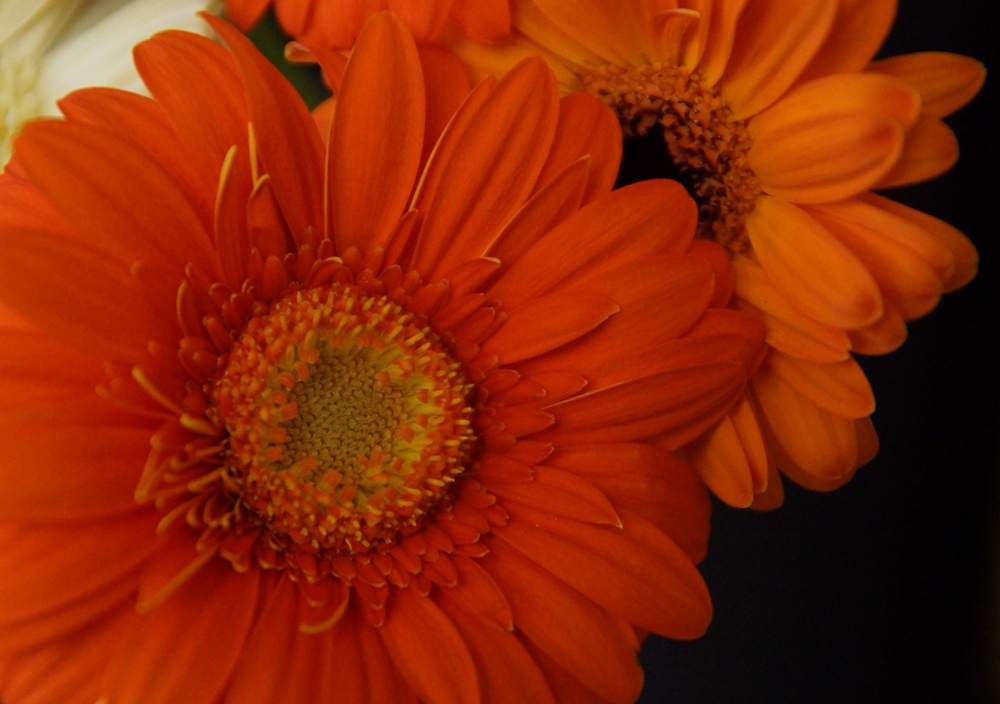 With three large holes in the back of my mouth, I’m still in a bit of pain, but it’s definitely improving. And after I get the stitches out next week (and the really painful bit, paying the bill!), hopefully that will be the end of my dental adventures (and being in pain) for a while!

In other news, my little cucumber and watermelon plants are still struggling along. I repotted them into real pots (which I’m sure are nowhere near big enough, but they’ll just have to cope, because it’s all I’ve got), and they’re sitting outside on the front step now, along with the mint jungle, and last year’s fennel and spring onion which somehow came back to life this year. I almost feel like a real gardener (nah, not really – those 5 little pots are pretty much the limit of my patience for gardening!). 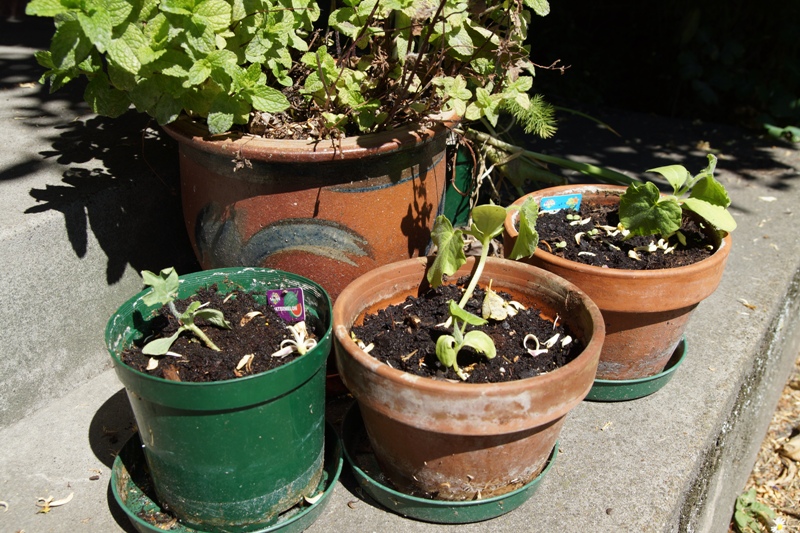 Talking of not gardening, it is a gorgeous sunny day today (according to the met service it’s already 29°), so I think it’s time to abandon the computer and go and find a nice cool spot under a tree somewhere to read a book.

s you can probably tell from the sudden drop-off in blog posts, life is very much back into the normal pattern of work, work, and more work, and feeling like there’s not enough hours in the day to get everything done I want to (and term hasn’t even started yet, so there’s still study to…

This could be why I’ve got no life at the moment: I’ve taken the day off work to attempt to get an essay written, and that’s the reading pile I’ve accumulated for it (the books, though they look impressive, are not the biggest bit – most of them I’m only using one chapter from –…

ot as big a deal as 22 February, but 4 September is still a significant date for Christchurch – the day of the 2010 earthquake that was the start of all the chaos and horror to come (GeoNet announced this morning that they’ve recorded 14859 earthquakes in Canterbury since that first one, 4558 of them…

his happens every year in Christchurch, but for some reason it always surprises us. We have a few nice warm days in October, we all decide it’s summer, and then are horribly shocked when the weather reverts back to cold and wet again.  This morning’s frost was a bit of a shock, though – according…

As promised, pictures of springyness: