I spent this afternoon with Harvestbird and the mini-Harvestbirds at a garden party hosted by Dorothy’s pop-up tearooms (i.e. my friend Jan, who catered my graduation party).  After cold and wet weather earlier in the week, it was a lovely afternoon sitting under the trees eating scones and cucumber sandwiches and an array of incredible cakes.  I taught the mini-Harvestbirds (plus an additional small child from a neighbouring picnic blanket) how to play petanque, but was called away from the grand championship game by Jan, to tell me I’d won a prize in the raffle: a seriously cool pair of teapot and measuring tape earrings (quilts and tea – it’s like they were made for me. Just add some cats and books, and they’d be perfect 🙂 ) 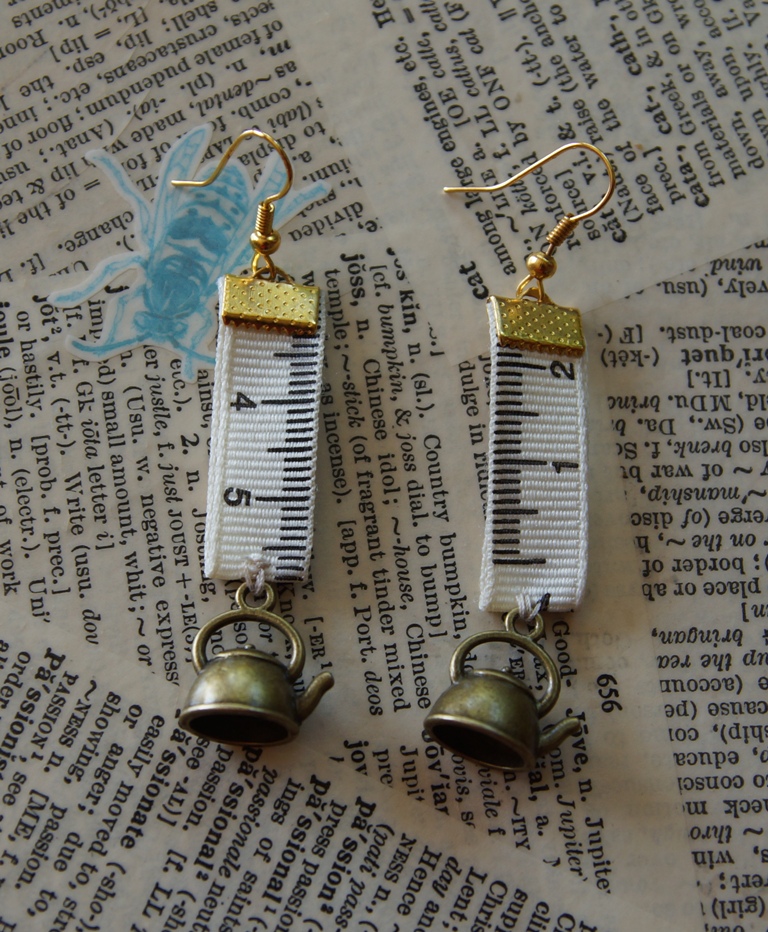 I think the highlight for the mini-Harvestbirds was the chicken they spotted perched high in a tree (the venue was out in the semi-countryside on the edge of town). Much excited shouting of “there’s a chicken in the tree” later, they had quite a crowd of adults gathered to see the phenomenon (mutter, mutter, city people, mutter, mutter…) 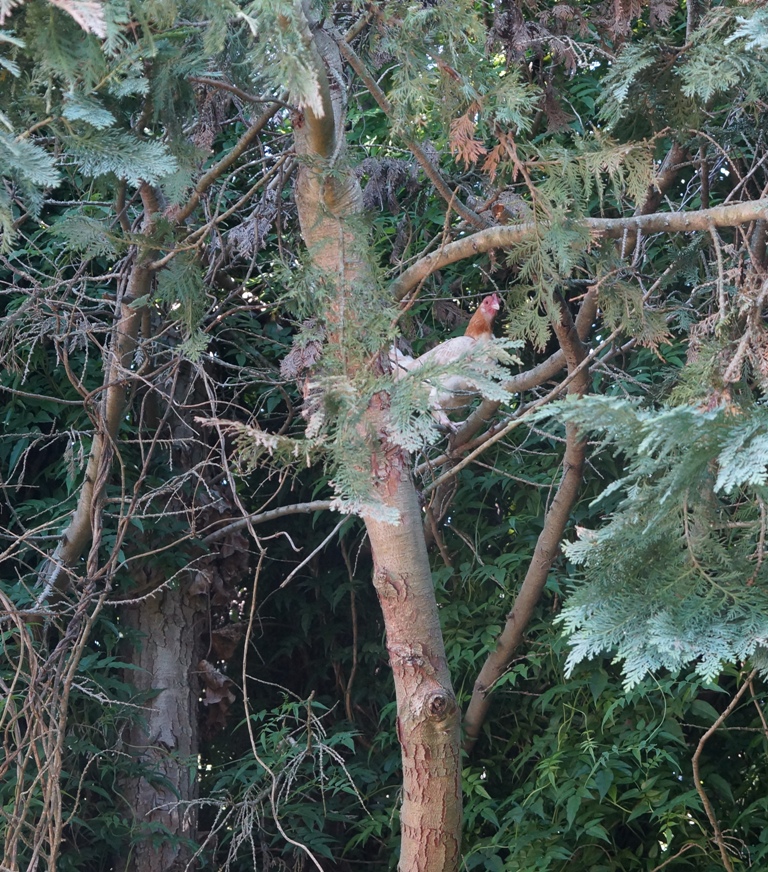 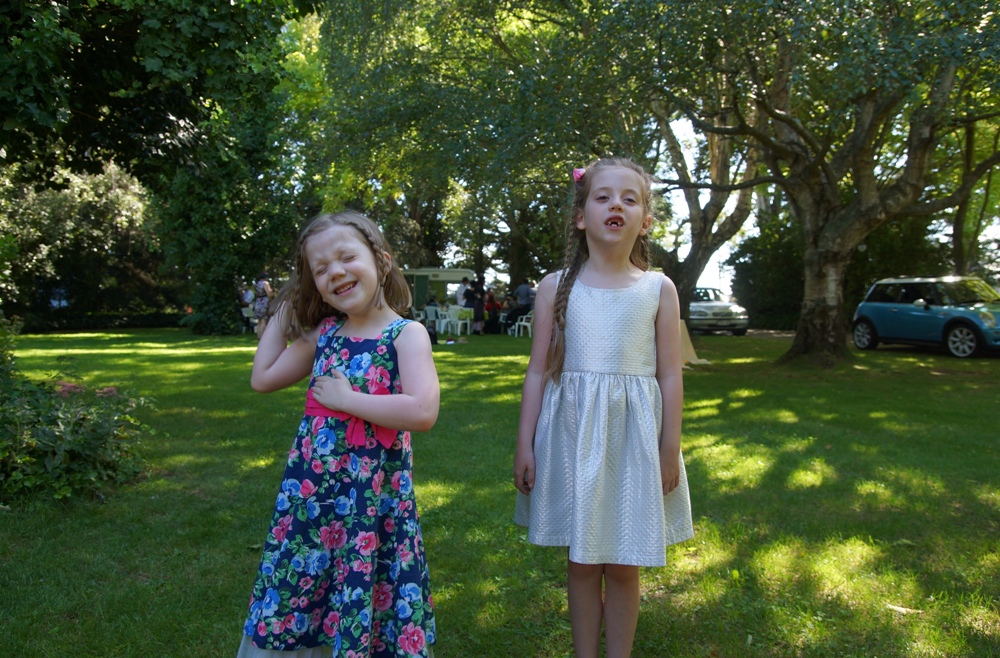 Hmm, I really should have videoed it, shouldn’t I?  But as you can probably tell, it was a very impassioned performance.
A very pleasant way to spend a sunny Sunday afternoon.

Talking of cucumbers, my little cucumber plants are struggling on, despite the cooler weather.  The leaves seem to be starting to die off, but despite that the plants keep valiantly producing flowers, and the actual cucumbers have more than doubled in size.  This would be more impressive if they hadn’t started out microscopic – the largest is now about 2 cm long. 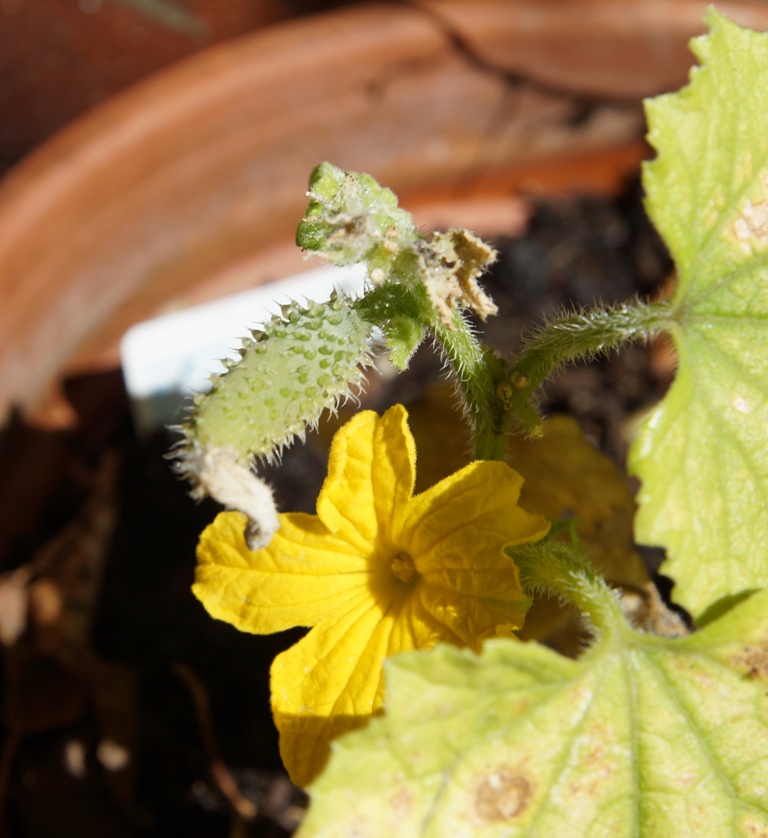 Any bets on the chances of it reaching edible size before winter? Nah, thought not.
Even more incredibly, the watermelon has suddenly taken off. I realised yesterday that suddenly it wasn’t just the couple of leaves it’s been all summer – it’s grown a longish vine which is using the neighbouring mint plants for support. A vine with little buds on the end of it: 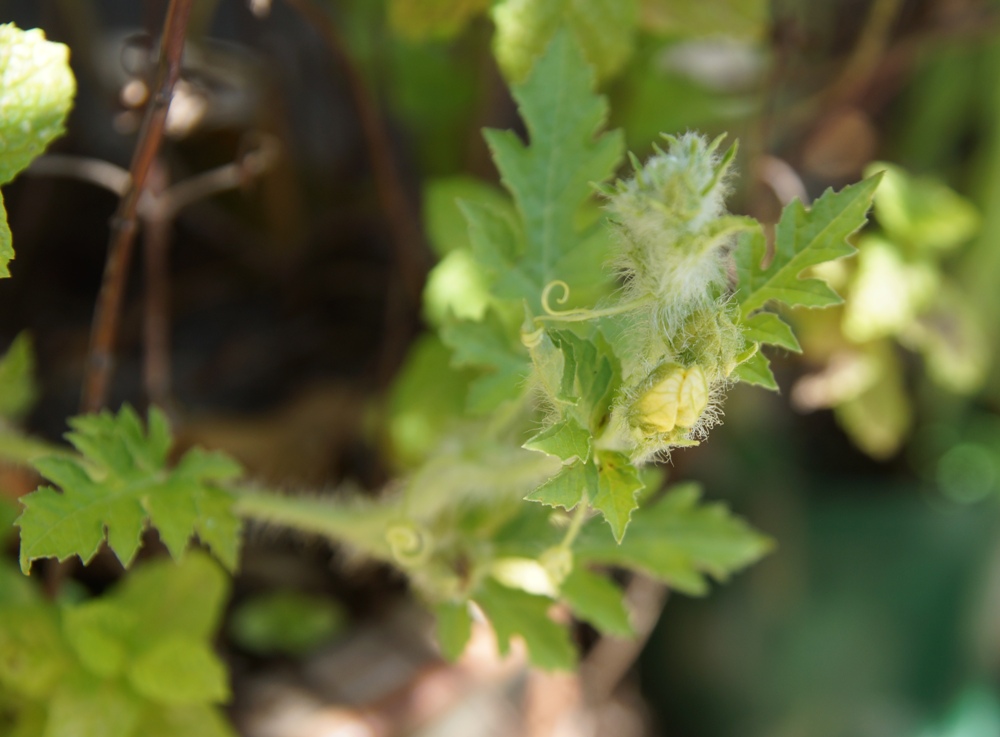 And when I got home this afternoon, those little buds had turned into watermelon flowers! 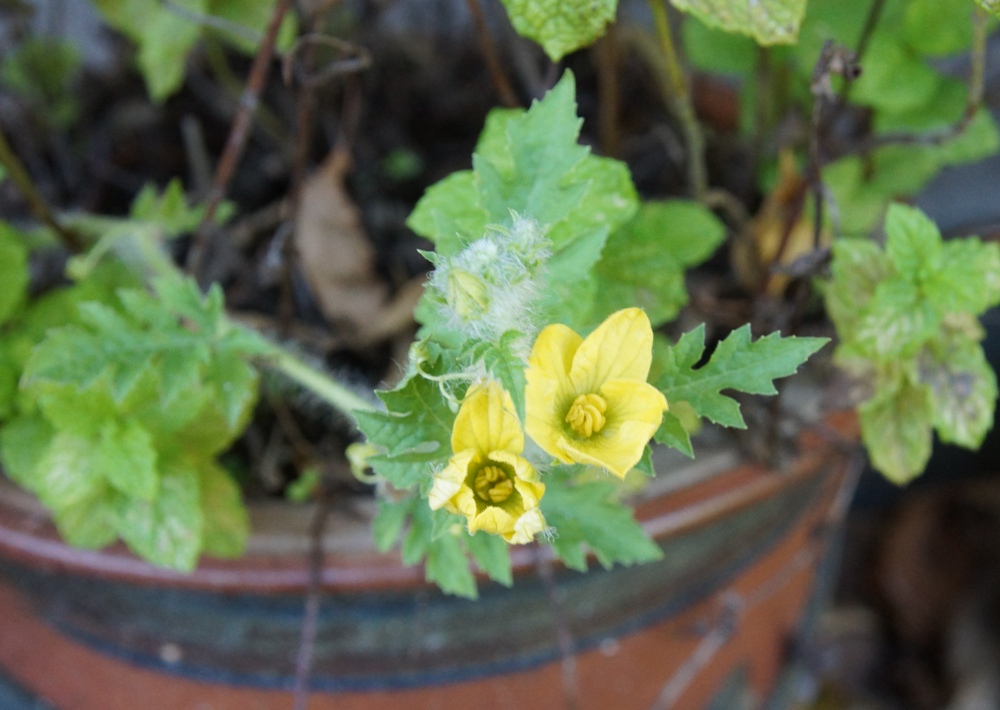 Definitely not holding my breath for actual fruit though.

As I was taking the photo of the watermelon, Parsnips really really wanted me to pay attention to her. This mostly took the form of meowing loudly and flopping dramatically on the step in front of me. Except she totally misjudged how close she was to the wall, so only her front half managed to flop, and the back was left slightly propped against the wall: 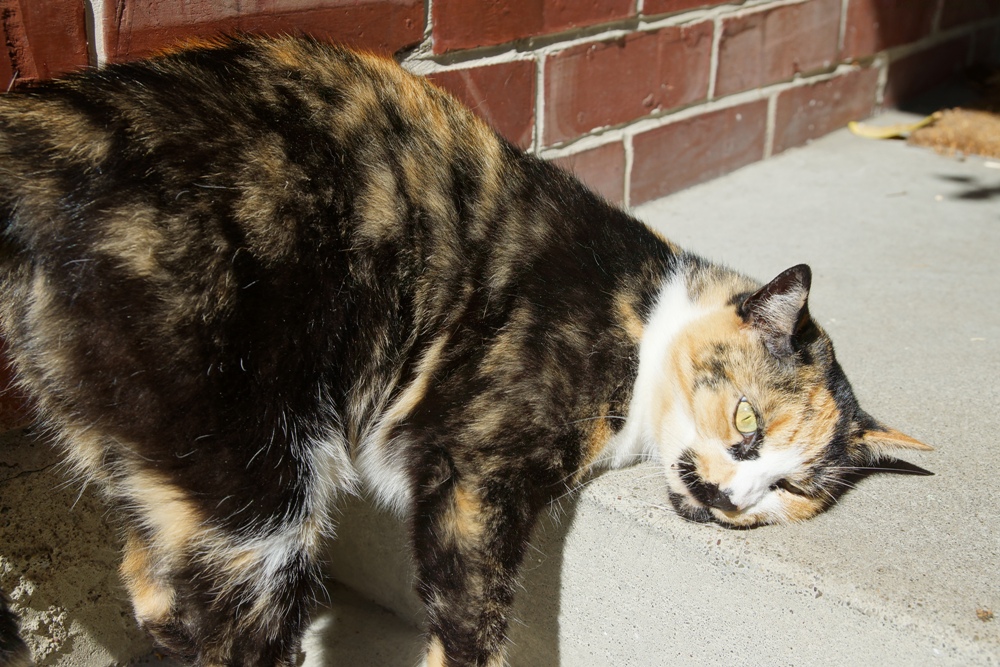 Most cats would have moved to a more comfortable position, but once Parsnips commits to a flop, she really commits.  She stayed in that position for as long as I was out there, twisting her head into maximum “aren’t I cute, now pay attention!” position while her back legs stayed standing on the lower step 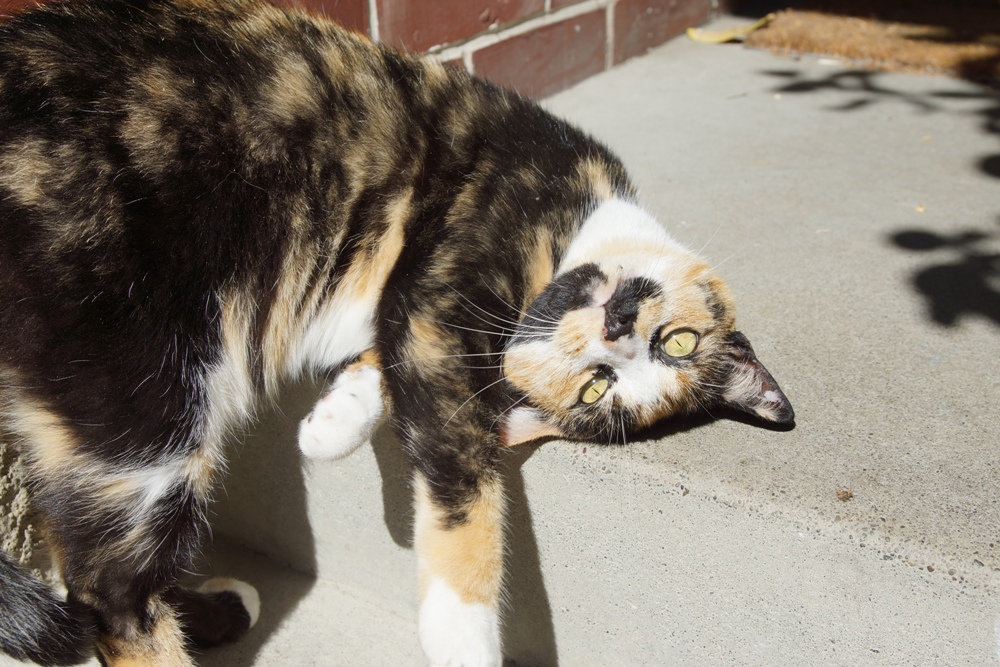 umber one thing: I want to know whose decision it was to schedule the election for the same weekend that daylight savings starts?  Have they no sympathy for those of us who stay up half the night to watch the results, and then get an hour less to sleep in the morning?  This is nothing…

ecember is suddenly upon us, and the round of Christmas/end of year functions has started – I’ve already been to three, and it’s only the 9th.  One was combined with a farewell – Jan, a very-like-minded colleague from another department, is leaving to set up a tea shop in a gap-filler space in the CBD. …

aitangi Day today, our national day and anniversary of the signing of Aotearoa New Zealand’s founding document, the Treaty of Waitangi.  So of course, it being the national day, everyone attends lots of patriotic events and celebrations… actually, no, most people just enjoy having a free day off, and otherwise try their best to ignore…